Jenn, a friend of mine from the US had an assignment at her creative writing course, which she decided o take up in India. Her project required her to be in Delhi mostly and may be in Mumbai and involved working closely with some NGO’s to get to know the subject. But when we invited her over to Bangalore she was very excited and quickly booked her direct flight from Mumbai to Bangalore.

Jenn arrived on the 8th after several years of wanting to come to India. It is always interesting how we get to see our city from a point of view of a foreigner and we both become ambassadors of our countries. There are several things to be worried about when one travel abroad and one of the first things that comes to my mind is food. But with Jenn it was not an issue. She loves Dosa’s and other Indian food.We visited Bull temple, Gandhi bazaar and Bangalore palace. 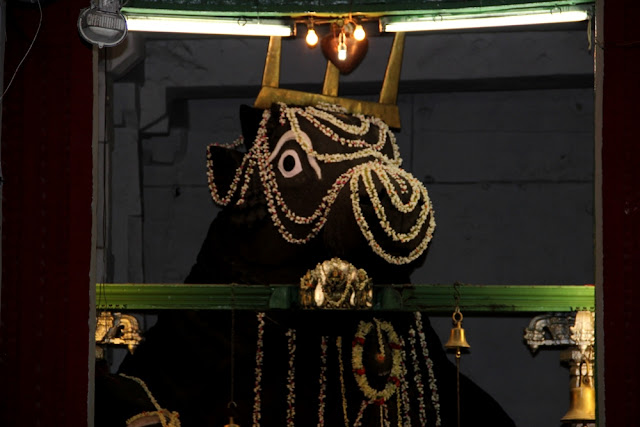 On 10th we planned a trip to Belur. I first visited Belur 15 years back and then I was a budding artist. The moment we entered the main entrance I saw a foreign artist sketching the temple. That moment stays with me forever. As we hired a guide, he explained us every beautiful sculptures (Called Shilla balike) and the beauty of its intricate carving. One could spend hours looking at them. This was my third visit but the brilliance of this artwork dazzled me like it did to me during the first visit. 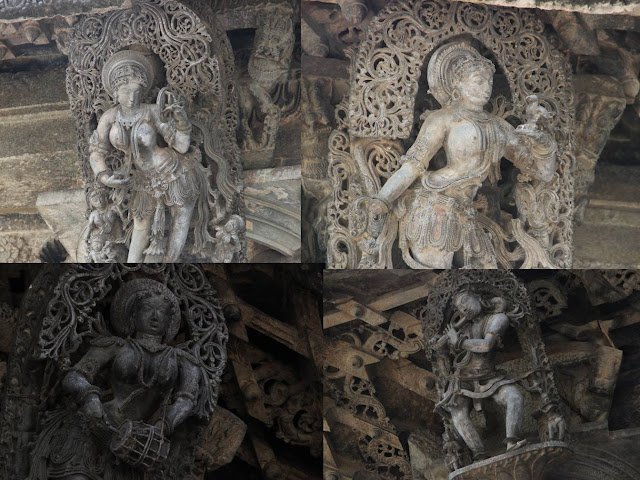 Every sculpture of women had a detailed story. It is poetry by itself which one could interpret in their own way. The Guide choose to explain us the most famous interpretation of all. And the beautifully carved Mohini is magnificent.

The temple is one of the finest examples of Hoysala architecture. It was built by king Vishnuvardhana in commemoration of his victory over the Cholas at Talakad in 1117 CE. Legend has it that it took 103 years to complete and Vishnuvardhana's grandson Veera Ballala II completed the task. 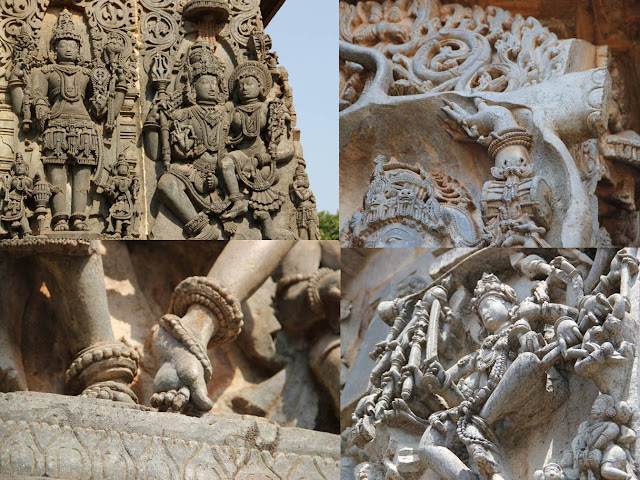 We also visited the old city – Halebidu which is now in ruins. Both these temples are masterpiece built by the creative architects of Hoysala Empire.

Belur is around 4.5 hours drive from Bangalore and is a one day trip back in time to the world of great artists whose work can dazzle one for years to come. 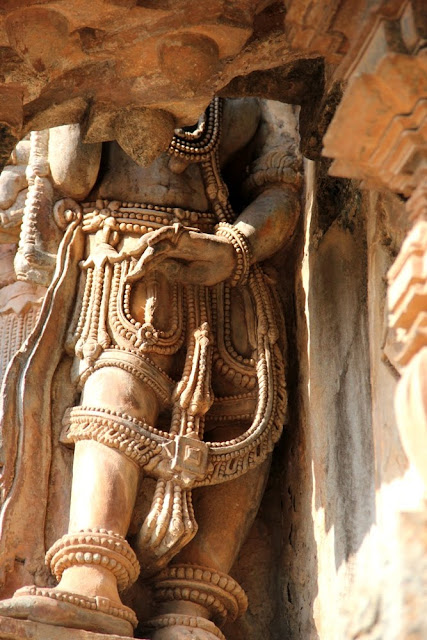 It is very surprising to look back and notice that almost three months are nearing completion in this year. What has kept me busy apart from editing my blog posts on the North-East trip, are my French classes and DELF exams.

In January I finished my A1P2 of French studies and decided to appear for the DELF exam which are the official French proficiency tests. Thanks to our teacher for encouraging us to take the exam that most of us in the class appeared for the test. She believed in us more than we did in ourselves I guess. J During one of the last few days of class we treated our teacher at Café noir. The cafe owner was happy to speak with us in French. I gifted this painting for our teacher whom I consider is one of those best teachers I have had. 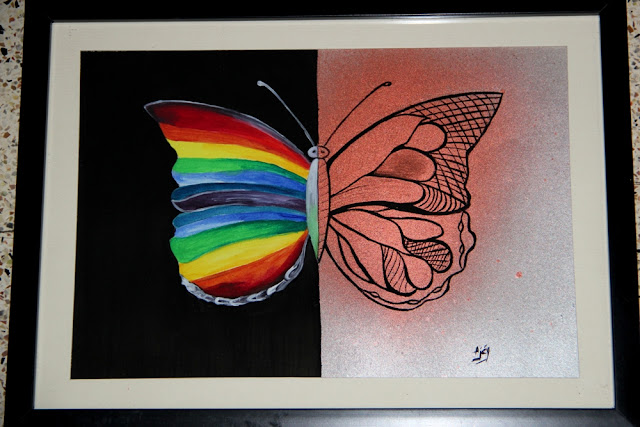 After our classes we had two weeks of break to prepare for the exam which was very easy.
Our A2P1 batch started on 25th of Feb. New class came with new teacher and new friends. The class strength is 23 and is very diverse in nature. Age varies from 10th grade school goers to middle aged home makers. The class is full of many interesting people with interesting hobbies like wannabe iron man to designers and musicians.
Six of us who had continued from previous class found this class to be larger in size – 23 v/s 8 previously. But as weekends passed by we all got to know each other very well. Thanks to the Fete de francophonie happening at AFB which is bringing us all together with several group activities lined up.
In-between the classes, the Oscars kept introduced me to some good cinema. The Descendants, Midnight in Paris, Hugo, The ides of march, Margin call and Extremely loud and incredibly close are my favorites. Meryl streep deserved the award for a brilliant performance.
à bientôt
PS – I passed my Delf A1 with great scores. :-)

I continue from here...Kaziranga National Park

Moment the bus approached Guwahati outskirts there was a heavy traffic jam which delayed us by an hour. India is experiencing a drastic change in its infrastructure. A four lane plan from Guwahati to Shillong just beginning and another to Johrat close to completion. I saw construction work everywhere I visited in the past 3 years – Sikkim, Kinnaur and now Assam. So it is, back home too, in Bangalore.
The city looked very lively when we arrived there at 2 pm. Our hotel was at paltan bazaar which is a very noisy place. Hotel Mahalaxmi that I had booked looked much overpriced with grim faced people at reception. A friend of mine had suggested a ferry cum restaurant in the Bhramaputra River. We took buses to reach there and found that we were late and the ferry had just taken off. But it seemed like a discotheque so we lost interest and instead stopped by a nice hotel by name Jb’s which was so similar to Anand Bhavan. They had all of Indian cuisine.
We headed back to Paltan bazaar which looked so pretty with road side shops and lot of food stores. We went to an interesting sweet store that served tasty AssamiPeeta, Rasamalai and many other sweet dishes along with chats. 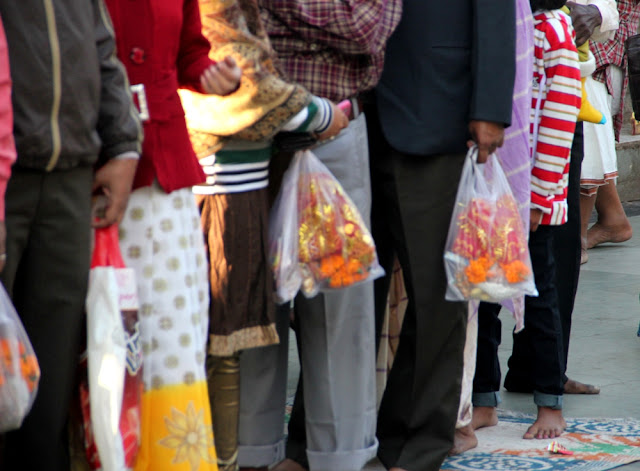 31st December
Kamakya temple is one of the most famous temples in Guwahati and we decided to visit the temple. The hotel front desk foolishly tried to trick us by saying that there were no buses to the temple, as though we would not find out and ask them to book taxi. But at Paltan bazaar we got some guidance from localities and we took a bus till the base of the hill on which the temple is. Here on gets a lot of shared taxi. On top of the hill is the beautiful temple carved out of stone. But what we did not know was the time it would take for the darshan here. There are four types you could get to the deity – Free, pay Rs101, Pay Rs500 or be on the queue for army quote. But anyway once you are in the queue there is no difference as each one moves alike. We were there at 8 and by the time we got in it was 11:30 AM, which is horrible and very frustrating. 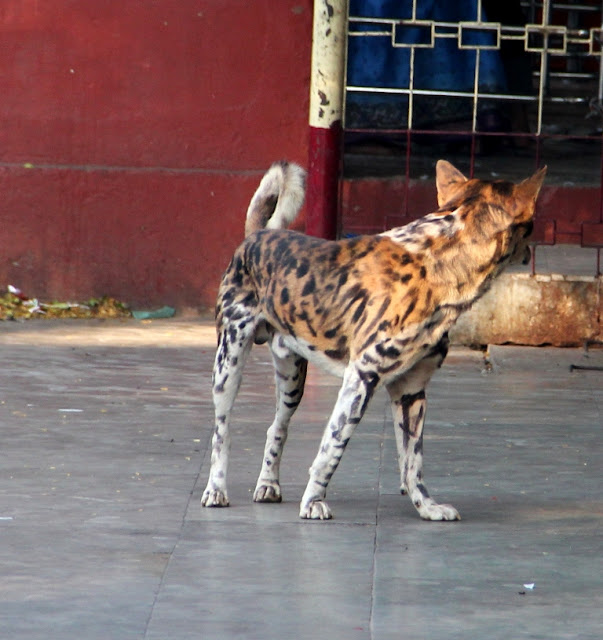 Fancy dress for Dogs - Some drunkard must have got creative :-)

Meanwhile we watched the devotees praying, offering coconuts by hitting it on a rock and also some priests carrying goat heads. We learnt that these priests are called Pandas. Inside the temple there is a small idol of goddess which was decked with flowers and red or vermilion colored cloths. Four goat heads rested at the base along with other sweet dishes as prasada. Behind the main shrine is a small passage that leads to a cave were a natural spring originates and as you go there the pandas drag you and apply lot of vermilion on your forehead and start demanding money. His eyes kept following me until I offered him and he kept demanding. 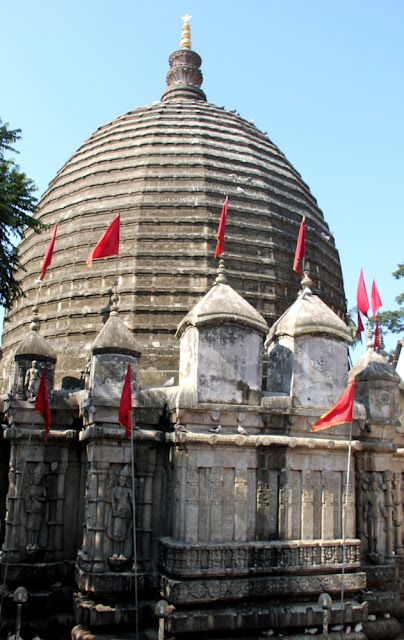 This is one horrible experience I always have as a south Indian traveling to a temple in north. Starting from Maharastra the story is same. Priests demand money for everything. Down south it is not so and temple visits are far more peaceful than this and of course no animal offerings down south. 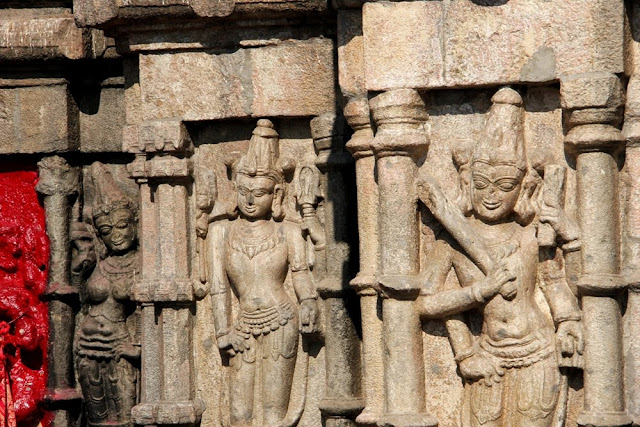 As it was already late we took a shared taxi back to Kacheri and from there, a bus till hotel.

Now we meet a very interesting man. Meet mister Taxi driver; let’s call him Mr. N and N for Natwarlal. N demands Rs550 for Airport, I bargain for Rs400 and we settle at Rs450. N is unhappy and on the way wants to make up his Rs100 he lost from me by adding another passenger. If people did not agree to his price he scolded them and if I asked him to move fast he would demand the other Rs100. In the busy streets of Paltan bazaar he hits a motorcycle and instead of apologizing fires curse words at the biker and then looks at us and say- “I scared him away.” He also prays to the God idol in his car. He makes several stops to gather passengers but finds no luck. I allow him to do so after he ignores my request to drive fast.

At the airport he is stopped by traffic police who noticing the window with tinted guard darker than approved, scratches them all with a pen. He pleads them no to but they just continue their task and finish it within minutes. He scolds them too and drives sadly to the airport. As I gathered my baggage from trunk I expected some drama but he simply took the money from me and left. This was an eventful 30 minutes.

The flight luckily was on time. It was Preethi’s birthday that we celebrated at airport by slicing a black forest. My co-passenger in the flight was a nice gentleman called Mr. Goswami who was basically from Kolkata but works currently in Mysore. He was on duty to Guwahati and would be traveling with us till Kolkata. He admires Bangalore and Mysore weather and considers the weather to be the best in India. But he is concerned about the heavy traffic in Bangalore and the only Kannada speaking crowd in Mysore. It is interesting to receive opinions about other cities from people across India, just like I would have one on every city that I visit and as I compare them with Bangalore. He mentioned that he normally carries bottles of rasagoolas for his friends in Mysore and every time he has to open the container at security check. The man was so kind that he wanted to offer tea to us. But unfortunately the airhostess had no coffee or tea. We reached Bangalore back at around 8 pm.

While driving back home on a taxi I recollected the journey and how diverse this trip has been in terms of travel, experience and people we have met; from trekking to remote villages to safari in a jungle; from Rhinos to kind people of Meghalaya; from living root bridges to bazaars; from forests to cities. I will always cherish this trip and however much I want to return here again I know that there are so many other places I still need to see but memories of this trip I shall carry everywhere else I go.
on March 17, 2012 1 comment: