Sometimes, there are moments that are blended with dissimilar emotions; thoughts and words, faces and glimpses, facts and assumptions, gratitude and confessions; everything from violet to red; all these feelings appear to merge into the sky that seems to wrap us all like a blanket. This moment, only stays for a while before it evaporates into thin air as though it never existed.

I have had an eventful time so far but something kept me from blogging; perhaps it is because of too much writing, elsewhere. As the weekends arrive my French classes absorb me into a new world. This post is dedicated to my love for French and France that in some mystique way is growing day by day.

While browsing through the net for the languages most spoken around the world, I noticed that Mandarin dominated the list and of course it clearly made sense that I should refine my search to – “Language spoken in most countries” and not “The most spoken language” which erased the population criteria. Now, French followed English to the second place. For my desire to travel the world someday this was a tiny step that I took so that I could travel a country more than just seeing it.
Until I completed my A1 Part 1 level at AFB, it still remained a mission and I was not sure if I would continue further. But I decided to start afresh. I joined a new class for A1P2 to meet some more new people and what a nice decision this has been. While my previous teacher brilliantly shaped the fundamentals with his vast knowledge of the language; the new teacher made learning enjoyable with her creative ideas and passion for teaching.

And soon, I began to love the language more than before and the mission slowly turned into passion. I started to read French comics, began watching French movies, wrote French poems and listened to French music. It is interesting to notice that what may start as a mission could simply die due to lack of passion or magnify into something enormously beautiful with its presence. 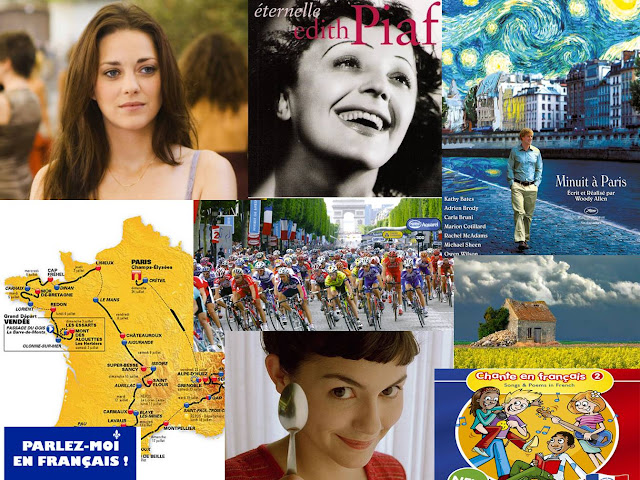 Pictures from the net!

The glimpses of an attractive city in the movie “Midnight in Paris” or the beautiful vineyards in “A good year”; a brilliant song by Edith Piaf “Non, rien de rien, Je ne regrette rien” used as a theme song in the movie “Inception”, simple and creative books like “Petit Nicholas”, easily structured French poems; French movies that are so close to being natural; the simplicity and innocence in “Le Fabuleux Destin d'Amélie Poulain”, the comedy in “l'auberge espagnol”, the romantic “Je Vous Trouve Très Beau” and the intensely brilliant “Incendies” or the famous tour de france.
All of these seem to merge into one big feeling of nostalgia!
on December 17, 2011 1 comment: