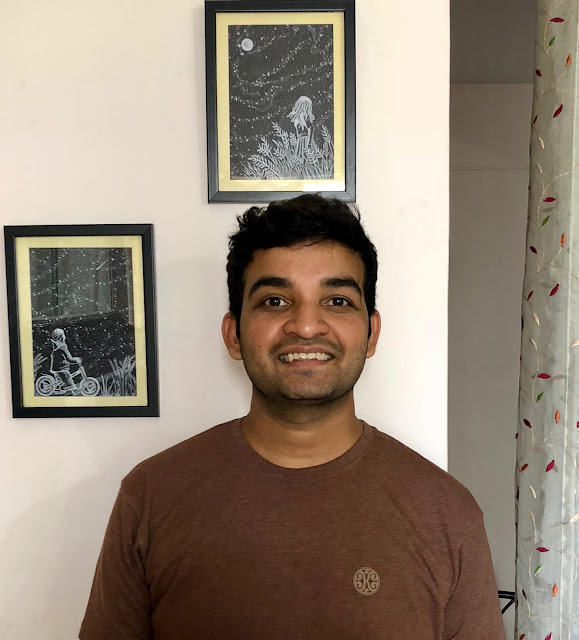 Hello there!
I am called Ajeya. I was born in a small coastal town of southern India called Surathkal. I love the beaches near my house. They inspired me to write poems. It is here that I spent the first 21 years of my life. I grew up playing with my neighbours, exploring the neighbourhood with my cousins, being pampered by my two elder sisters.

Along the way life introduced me to a few great people who inspired me in many ways and I acquired several hobbies that now help to complete my personality.

It is in Mangalore that I was inspired by my uncle’s paintings and worked with him for two years. Painting is the only thing that takes me easily into a zero state. And I consider it as the only form of art that is not bonded by rules. It forms and reforms continuously.

My silent nature back then (unlike now) allowed me to express my thoughts through stories and poems which were mostly inspired by my observations and listening that my silent behaviour permitted. I mostly write stories related to "Coming of age" as at times,  I feel myself locked in those memories of adolescence and someday would like to influence and guide the teenagers in that delicate stage of life.

I had my small garden where I decorated the piece of land from the learning I gained from my aunt. Now I use my balconies to grow flowering plants and vegetables.

I left my hometown in 2001 to work in Bangalore as an Engineer. I then travelled to the US in 2004 and lived there for a year. It was there that my interest for traveling took flight. In that year, I explored more than 25 states.

And as my favorite author Virginia Woolf said – Nothing has really happened until it has been recorded; Blogs and Photography thus followed.

I have always been passionate about learning new languages as that opens the door to the world. My purpose of traveling has not been to see touristic places around the world but to interact with people, understand their culture and life. Thus my passion met a mission and I have now learnt French and Spanish. After pursuing my Masters in French Language, I am currently teaching the language.

I love cinema because it transports me into a different world or sometimes into the lives of others and what attracts me constantly towards it is that it is an amalgam of all my interests. "Stand By Me", "The Hours", "The Beach", "Nebraska", "Butterfly Effect" & "Rear Window" are some of my favorite films.

Everything in this world excites me; I believe that everything and everyone is interesting. Hence the list of interests keeps growing - Reading (Mrs Dalloway, The Hours, Parva, Sartha), Theater, Cuisine, French language, Music (Linkin Park, Indian, French and Arabic Music)++++