The Ambassador of simplicity!

“He inspired me to notice the shades and patterns in leaves and flowers; he cultivated in me the habit to observe the details of a situation and he made me realise the fun of playing with colours. I would like to believe that two days back (31-Aug), when he passed away, his soul, like fresh wet paint from a brush, merged into everything that is colourful in this world. My dear teacher (P P Karanth) I will find you in everything that is colourful!” 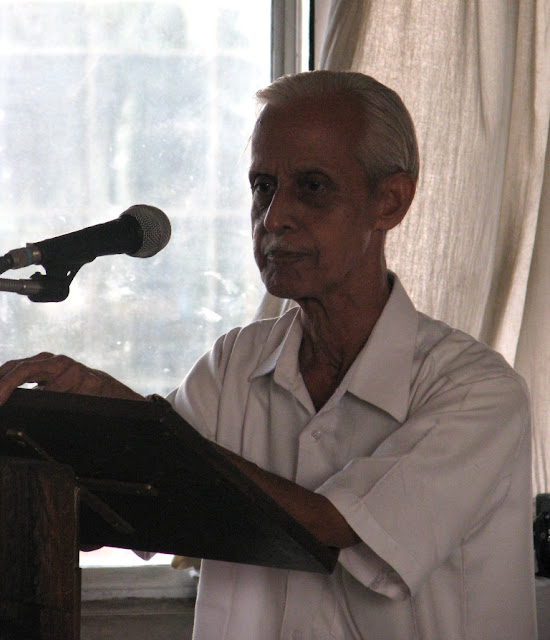 During our 10th grade holidays my friend Vasu and I joined an art school in Mangalore. I thought it was fun. We were asked to do a lot of pencil sketching. But when my mother noticed my interest and improvements in art, she suggested that I learn from my uncle (Father’s cousin). Surprisingly, I had no recollection of having even met him before that day. Whenever my mother met him and told him about my interest in painting, he would say – “No, I don’t really teach many students these days.” But my mother was insistent. She would remind him of me every time she met him. So finally, he agreed to have me as his student.

On a fine evening, I remember walking into his abode for the first time with my father. The place looked so peaceful. A small gate opened the way towards a small but pretty house with Mangalore tiled roof, surrounded by trees and flowering plants. The doors and windows were wide open as though there was a constant exchange of creativity - between man and nature. There he was at the door, dressed in his white shirt and doti, looking as tranquil as ever.

As I sat on the bench in the living room, the first thing I noticed inside the house was a wooden separator between the main hall and the bedroom. It was painted by him. A tall figure in agony, turning its face away from a horrible sight in the sky. Two kids accompanied the tall figure - a girl and boy. They pointed towards the red sky where few birds; perhaps cranes, with their beak, were in the process of breaking painting brushes. Every time I sat in front of that painting, I derived new meanings from it but I never asked him what it meant. I believe no one should ask an artist what his work means. Not only is it an insult but also a loss of primary intent of allowing the transfer of thoughts. One relates to art through their own experience and not by the curiosity of knowing the intent of the artist. This unfortunately many viewers do not realise.

I had a few classmates who were younger to me by age but far superior in the subject. But sir gave me my time to learn. In the art school where I studied previously, there was a structured approach but here there was none. He asked me what I wanted to start with. I had no clue, so he suggested that I start with miniature painting. He then handed me a book and asked me to pick a painting from it. Even though I struggled to understand his teaching methods in the beginning, everything fell in place as we proceeded. I learnt that day that teaching had no rules, it had no structure, it was just sharing of experiences and one learns from their own experiences. He would suggest I go look at leaves before I drew them. He would pull out some books and simply talk about any painting and the qualities of them and so began a great friendship between us to discuss and learn not just art but, philosophy, mythology and many interesting stories. If he was reading some book, he would discuss it with me, tell stories from it.

He was very witty and would involve every student in a good joke and we all were there for a few hours to share his life and learn from him the joy of living. His students were kids of age 10 to old men of age 65. Shenoy mama, as he was called, was the oldest who would travel from Udupi every once in a while. Several other art teachers would come to him and learn from him or discuss art.

I would leave college at around 4 PM every day, reach his house by 4:30PM and then paint till about 6:30 or 7:00 PM. In those few hours, I found a lot of peace. He would offer us some raagi malt and biscuits or rusks. And remember, he never took a single penny from his students. Everything was for free. His art was not for sale, nor was his knowledge that many would otherwise have cashed on. He painted the interiors of Ramakrishna ashram in Hyderabad and Chennai depicting events from great Indian epics.

Sir was always very frank in his opinion, he would never have sugar coated words to admire someone falsely and most of the time it was great fun to hear his comments on any subject.

When I joined engineering, I could not continue my classes daily, so I started visiting him during my semester breaks. I cherish those days until today. It was very enjoyable with paintings and conversations. I would spend all morning or all evenings painting. After all these years when I look back, I never recollect him teaching me how to paint; it feels as though I learnt it mysel. That was how great a teacher he was. He never restricted my creativity. I had all the freedom to do what i wanted. Occasionally, he would come and correct some brush strokes. However, one thing he mentioned very clearly is that when I were to recreate a painting of someone, I must not blindly copy it. He suggested that I add something of my own into it.  For exemple, a new colour scheme or a new object. Eventually, he said, I shall develop my own colour scheme and style.

When I moved to Bangalore for work, I lost touch with him. But during my visits to Mangalore, I would go to him and show him my paintings. I did not have many to show him though. He would scold me for not filling the pages of the book. We would then discuss the books he was reading and his opinions about them.

The last time I met him was at one of the functions at a relative’s place last year. I tried visiting him during his illness but due to some emergency could not make it and only after I left did I come to know that he was in his sister’s house, next to that of mine. When I heard of him being in the ICU, I immediately booked the tickets to travel to my hometown to visit him, but unfortunately even before I could board my bus here, he had passed away.

For a man who had sacrificed his life for art, his family involved few relatives and several students in whom he has planted his skills, his creativity and his thoughts. And as I wrote earlier, he lives on, in his paintings, in every painting of his student and then their students and so on forever.