On the 30th of April, at around 9:30 PM, 17 of us left Office in 4 cars. We took the Kanakapura road and after some confusion finding a dabha for dinner that has been apparently closed for sometime now and taking several U-turns to find it, we finally settled in at a restaurant. By the time we had had dinner, it was 11:00 PM. We drove straight to Kabbala Durga. On Kanakapura road after Sathnur, is a right deviation towards Channapattna (Channapattna-Sathnur Road). On this road is the village of Kabbalu (Approximately 80kms from Bangalore). The Temple seems to be very popular to be missed. By the time we noisily parked our car and got down, we had woken up a few villagers who directed us to the base of the hill from where the trail began. They told, it was a road next to a "Mold Mane" i.e a concrete house. We very easily missed that tiny road that they were referring to and took a paved road around the hill. That was when we met another group of villagers driving by who directed us back to the trail but warned us of cheetahs and bears and requested us to trek in daylight.

Once we were on the trail, we setoff with our usual chats, jokes and laughs. The climb was very steep but had a proper trail till the top. The view of the surrounding villages was beautiful as we gained height but it was depressing to see so much of electricity wasted in every small village for street lights. I wondered how exponentially large was our wastage in the cities. Lots of talk, jokes and laughs made the trek very enjoyable and less difficult; at least for most of us. Often through the climb, we counted numbers to verify everyones presence and every time we hit 17.

At the top is a small temple of Kabbalamma beside which we camped on a rock. I had carried a mat that came handy to sleep on. It was 3:00 AM when we reached the top and I almost immediately dozed off but not before watching a few shooting stars. At 4:30 AM almost everyone started to wake up. It was the cold that was getting unbearable. We searched for dry wood and made fire. While others went back to sleep, some of us collected more wood to keep the fire burning. We had carried some food that is always an essential during such treks that saved us from early morning hunger. 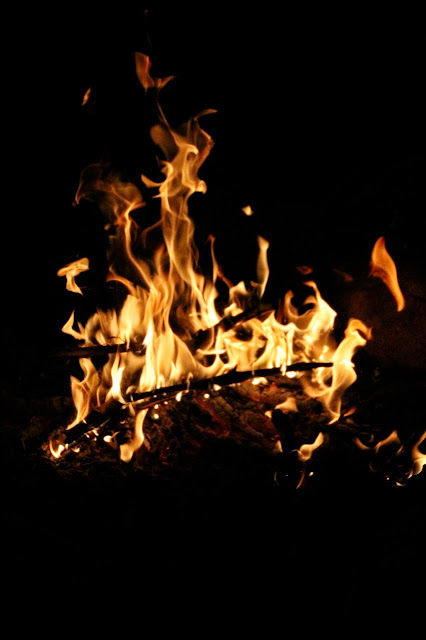 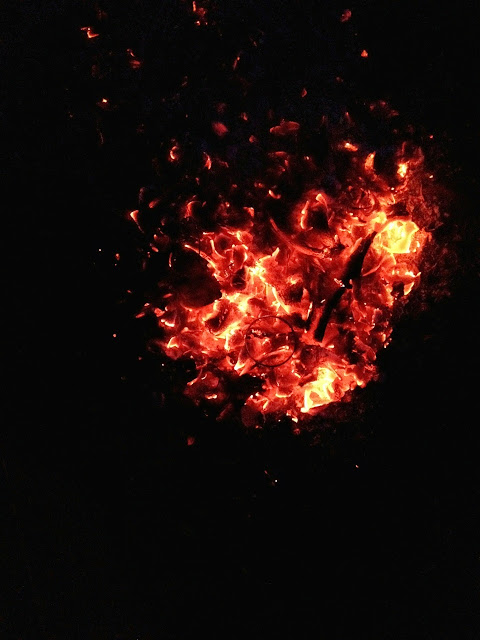 Due to the clouds, we did not get a sight of sunrise but the experience of spending a night atop a hill with no disturbance from the inventions of man, is by itself the most exciting part. In broad daylight, we decided to count ourselves again and found out that we were only 16. We never found out who was that 17th member with us during the night. Some say it is a ghost, some claim it to be Kabbalamma herself guiding us but, nothing remains confirmed. 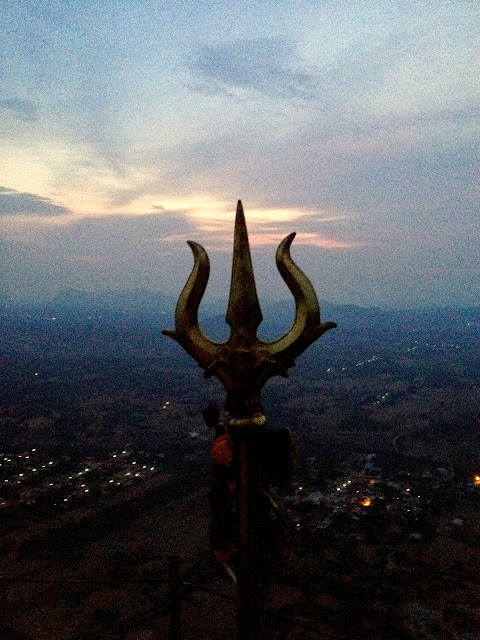 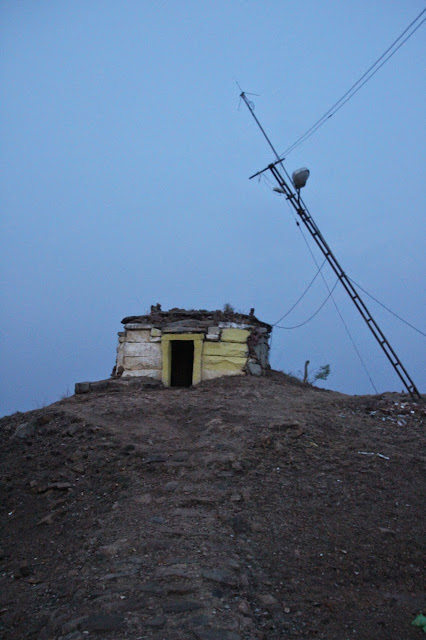 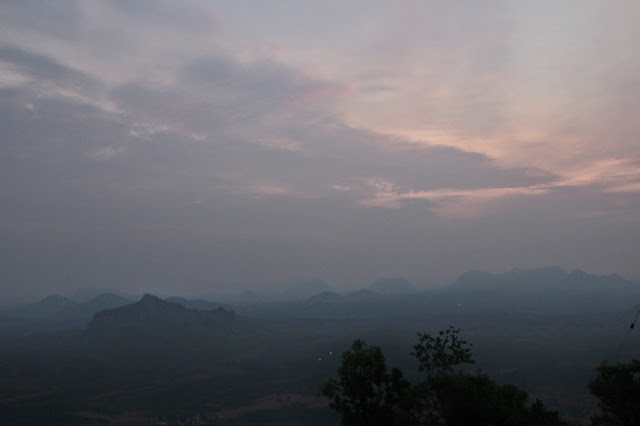 On our way back we heard a bear roar by a faraway cave and several monkeys scream and flee. We also realised in daylight that we had actually climbed a wrong way in the dark making our climb more steep and difficult. That is what I love about night treks. We are bound to find a way to the destination even if there exists an easy trail, making us thus an explorer in no less way. 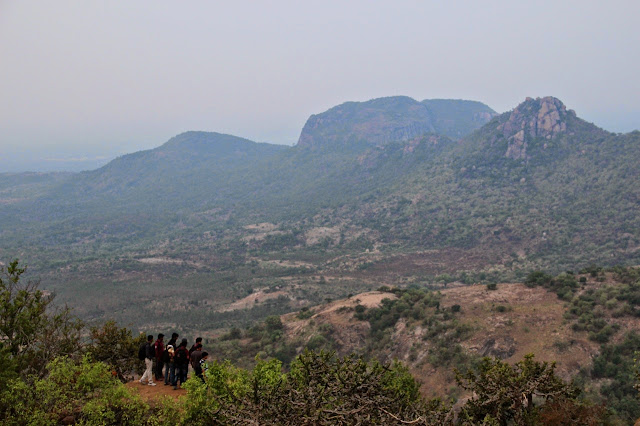 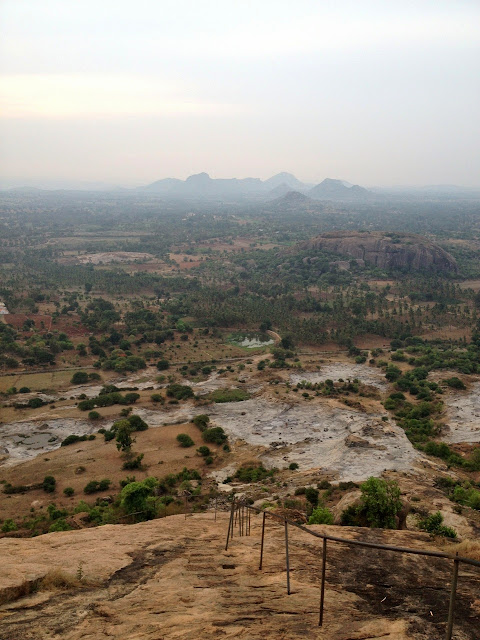 Kabbalamma temple seems to be a popular pilgrimage and during this time the temple was getting ready for it's yearly festival. The place is well equipped with rest areas, public dinning hall and even paid toilets.

We drove back to Kanakapura where we had our breakfast. After which we returned home. It was an amazing experience like every other night trek I have been on. The best part of a night treks comes when I sleep all of next day with the memories of the night.
on May 31, 2014 No comments:

On 27th of April, a Sunday, Seb and I decided on a photo walk in Lalbagh. In the very beginning of the shoot, as I zoomed in on some of the leafs to capture flowers hiding between them, I noticed a pattern. I dedicated that entire photo walk to locate and capture patterns. If birds eye view has it's own beauty, so does the macro level viewing. :-) That day, I saw patterns everywhere. 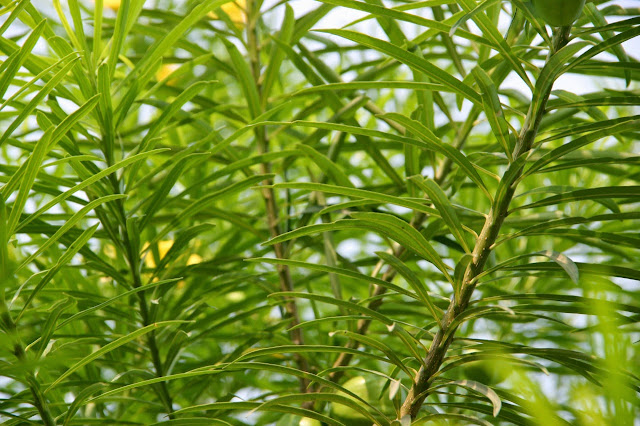 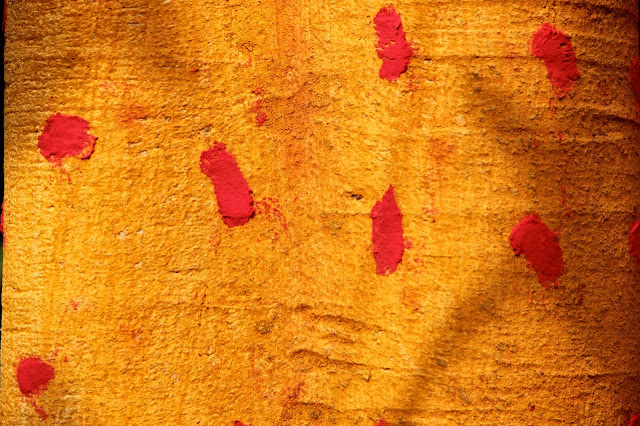 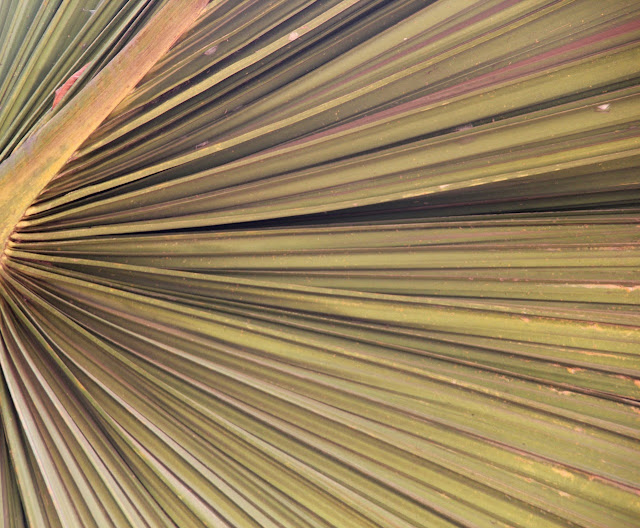 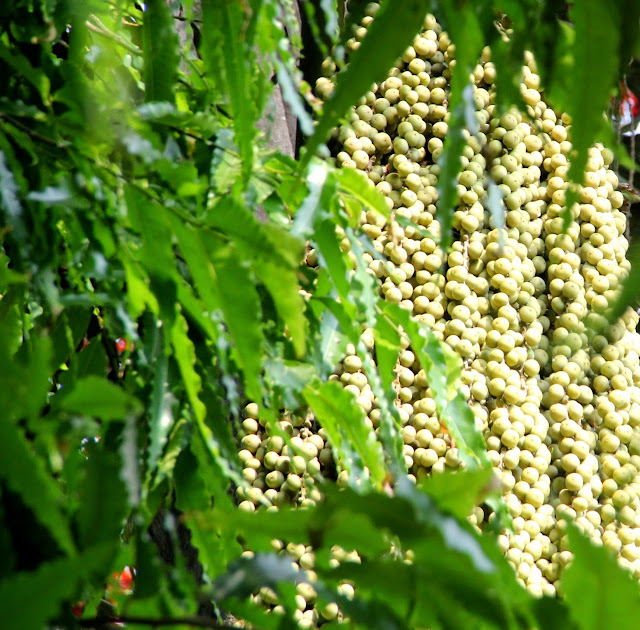 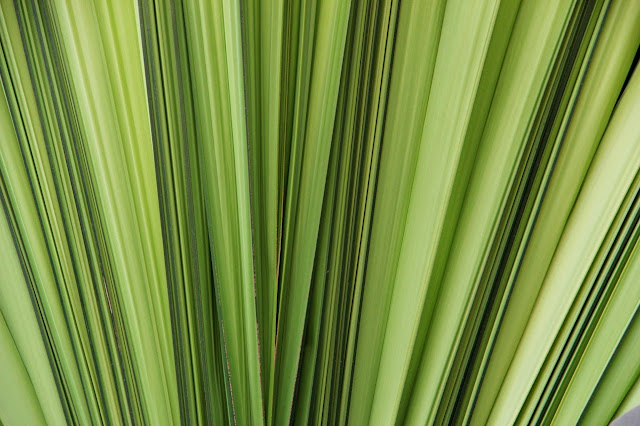 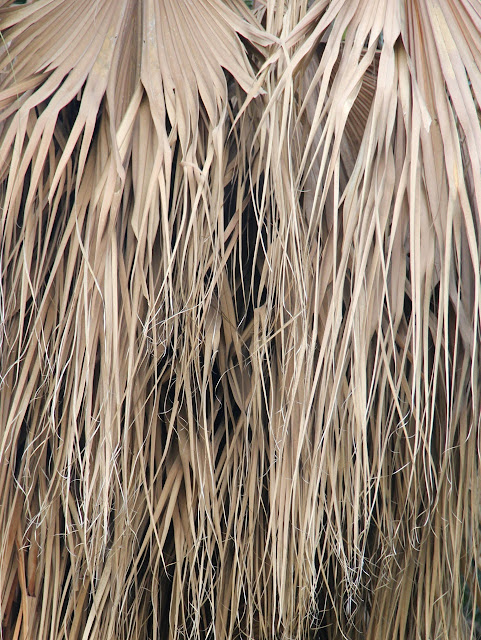 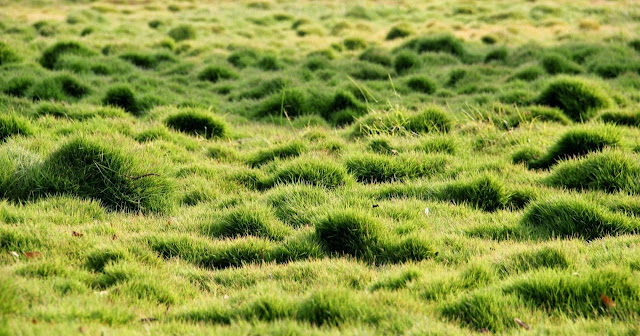 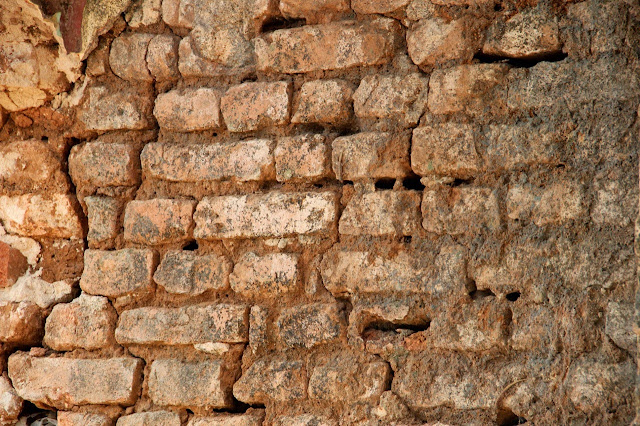 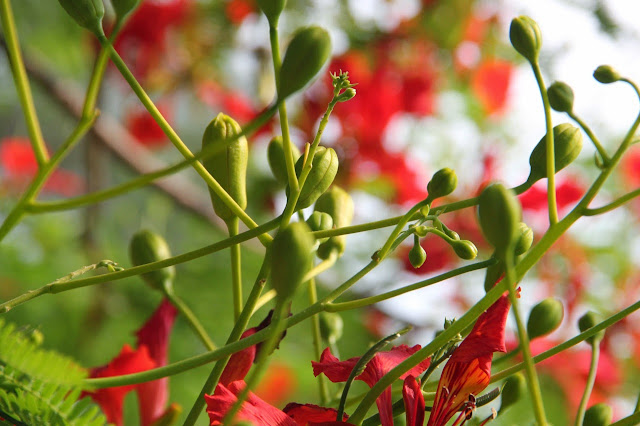 Email ThisBlogThis!Share to TwitterShare to FacebookShare to Pinterest
Labels: Impressions

The alarm rang at 5:00 AM and I woke up, messaged my friends Mak and Prem checking if they were up as well. I got ready and met up with Prem at around 5:30 near Ashram and from there we hit the Kanakpura road. It was a already getting bright on this beautiful Sunday morning (April 20th). Its been almost an year since I lost my bicycle and only a week ago, had i bought this new BTwin Riverside 3, with which I fell in love, at the very first sight. It’s light weight and smooth gears and the downhill towards Kanakpura made an excellent morning ride. We met Mak near Metro and continued our journey till Kaglipura where we had our breakfast - Two idili’s and tea.

Next we rode till Ravgodlu Junction (After Somanahalli) where we take a left turn towards Muthurayana Betta. It is around here that we met Shishir, who has just finished his 10th grade exams and was riding his new bicycle. He was planning on participating in the bicyclethon that day but as he had got late, he choose to ride alone in this direction He expressed his willingness to join us and we were more than happy to include a fellow cyclist on our journey.  So, four of us rode off Kanakpura road, into beautiful village side. Within a 4km ride, we were at the base of the hill. We locked our bicycles to a tree and decided to trek. 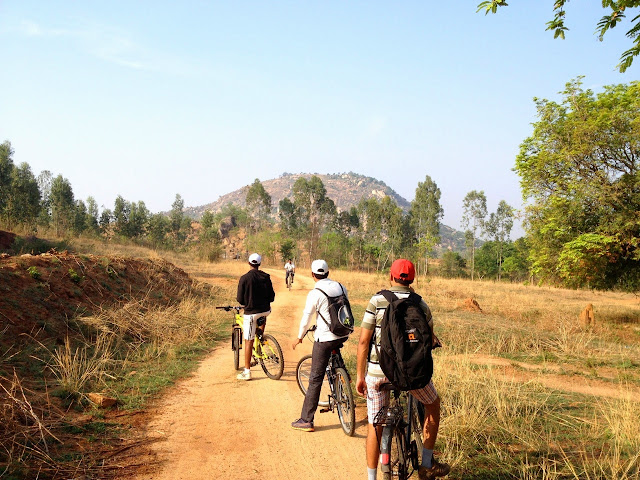 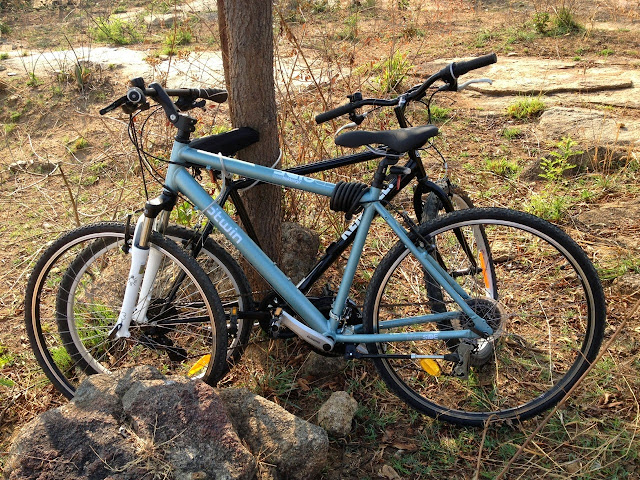 The trek was extremely easy and fast. In less than 20 minutes we were at the top. There is a small temple atop the hill and very nice view of the fields and the villages below. We relaxed there for a while. A well paved road seemed to twist and wind its way towards the Kanakpura road through small villages, so we decided to take that way back. 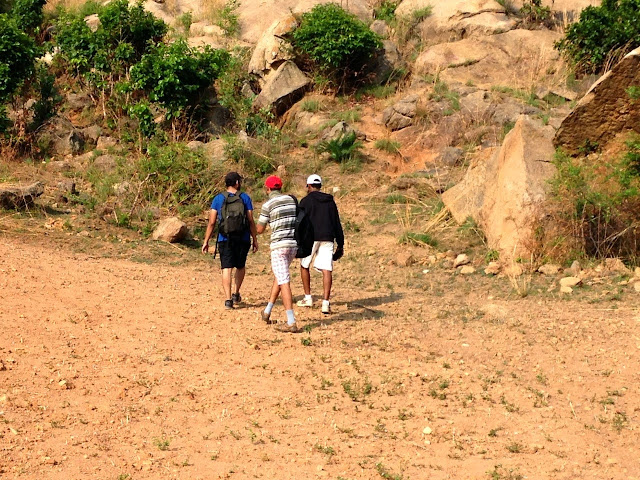 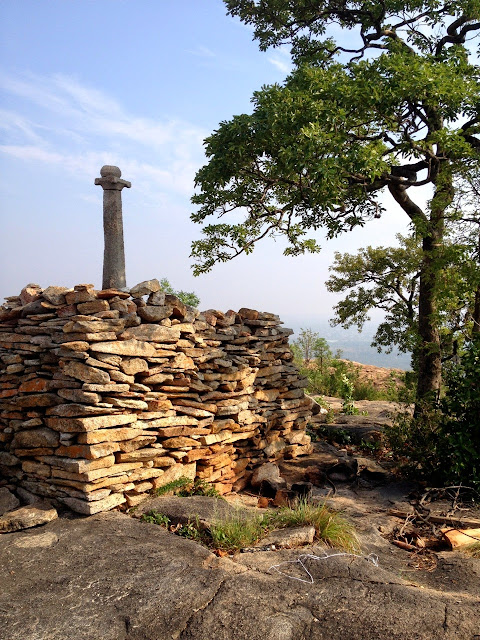 We got down and rode to the village where Mak played cricket with the village kids. After a short chat with the villagers who seemed rather shocked to learn that our cycle cost almost as much as a moppet, we left. We took this different route back to Kanankpura main road. It was a good decision. We rode back till Kaglipura and then Mak and I decided to board a tempo and drive back to avoid the heat.

The tempo guy dropped us close to Sarakai signal from where we rode back home. It was a short but very nice trip on my bicycle after a long time. That night, I slept well. :-)
on May 10, 2014 No comments: