While attending the script writing workshop, in Dec 07, one of the first exercises was to go and spend about half an hour in Gandhi Bazaar and observe three people; comeback and then write about them. I choose a fast food restaurant as an excellent spot to view multiple options. During this process, I observed “a mother”, “a flower vendor” and “an old man”. Out of these “the mother “was chosen by me, to construct a script around the character, later in the course. Here is the first character description exercise.

Mother
She stood at the end of a hotel by the street, looking at the passing by vehicles. Her five year old son restless as any other child of his age, picked one stone at a time and made sure it landed on the nearby road if not at any specific target. She looks at him and drags him near to her, as though it would make him realize that what was game for him is a subject of botheration to the elders whose mind has no stop to predictions of mishaps.
She presents a grim face and as though in deep thoughts. Her expression does not change except when she looks at her kid. When her attention is not on the kid she is busy in thoughts. Thoughts that may not be pleasant, one could say so from the rigid look she displays. One can see anger slightly surface on her face as a result of her thoughts.
Now and then, she adjusts her chudidhar shawl to cover her stoutness. An old man comes to her begging for some money.
“Mother, please give me some money.” He says
She ignores his request and instead drags her so closer. After he is gone, her son looks at her and asks with a confused look –
“Are you his mother too? Why did he call you mother?”
The lady bursts out into a loud laughter. She picks him up and holds him closer to herself and while doing so observes people around with a beautifully smile garlanding her otherwise intense face.
Her expressions change suddenly and she appears to be more lively with the smile still refusing to fade. The kid points out at the toys and asks her to buy him one of those. Like a slight pinch of strictness sprinkled over a sweet smile, the expression on her face changes quickly to appear annoyed. She rejects his request with a “no” and drags his hand away.
She returns back to her thoughts that had been felt unattended for few minutes. As though she is waiting for someone, she looks out in one direction.
Suddenly a faint expression of recognition surfaces on her face. There is her husband with two plates of idli. She takes one and begins feeding the kid first and in between tries to taste few pieces.
on March 30, 2009 11 comments:

Email ThisBlogThis!Share to TwitterShare to FacebookShare to Pinterest
Labels: Literature

I am presently reading Michael Palin’s book on Himalaya; where he takes an exotic, enchanting trip along the mighty Himalaya as it spreads into many countries like, Pakistan, India, Nepal & Tibet. A travel series has been aired in BBC. But in his book, he is more personal and less diplomatic is what I feel. He is witty when he narrates certain practices of the east, which may appear not common among westerners.

Along his journey he takes us into the lives of people settled in the valleys, close to the Himalayas. A non-Muslim, non-Urdu speaking community at Rumbur, Pakistan, called Kalash, believed to be descendants of Alexander’s army; People playing cricket at 10,000 Ft high, in a ground surrounded by mountains at Chitral, Pakistan; or a golf match at same height; Glimpses of Shimla, Kashmir and Dharamshala; Close encounters with Maoists at Lekhani, Nepal where British army is recruiting Gurkhas; His almost tiring journey to Annapurna Base camp; all these and much more, that I haven’t read yet, makes this book a little different from the usual travelogue. He explores people and culture along with nature. Basil’s (The Photographer) pictures are next to real.

I find British travelers or writers more relatable to me as an Indian, than the Americans. That is an observation so far and certainly not a definite statement. :-) What do you think? 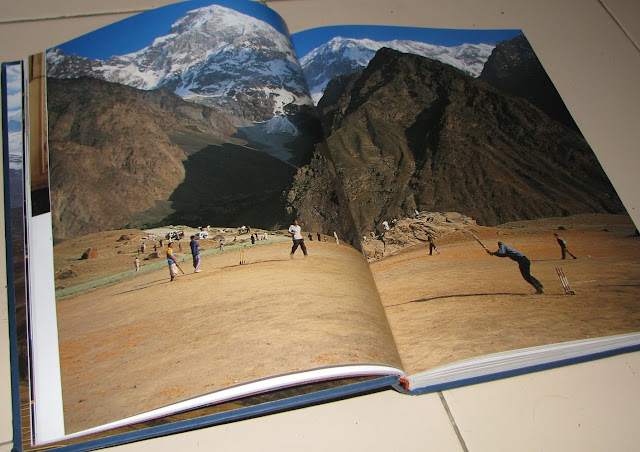 Some of his words from the book –

He writes about villagers, the day after Maoists take away the British recruiting officers to meet with their high commands –

“Everything seems different this morning. Perhaps they hate us, stirred to anger by the Maoists, who’ve portrayed us as friends of a corrupt and oppressive government?

I realize, rather pathetically, how easily I project my own feelings onto others. If I’m happy, they must be happy. Now I’m suspicious, they must be too. Their expressions give nothing back. They get on with their work and I get on with my insecurities.”

At Annapurna base camp, after a tiring hike filled with bad cold, pain and sore throat –

“…My scepticism thaws a little with the sun and as we walk beyond the camp and look out over the monumental sweep of the glacier that unwinds from the Annapurna Ridge, gouging a valley from the sheer rock, I realize how extraordinarily lucky I am to have seen all this.

And how much luckier to have a helicopter to take me away from it.”

“Shaking with emotion, he then walks to the end of the pyre and buries his head on her feet. I feel I should look away, but I can’t. I know nothing about these people yet, in this brief ceremony, I feel a wave of empathy, not just for them, but for loss, for the end of a life. I come from somewhere where death is kept private, almost as if it’s an embarrassment. We send our loved ones away hidden in a box, into a hidden fire. We don’t even press the button that’s sends the coffin into that fire. It’s all at arm’s length. Here in Pashupatinath it’s very much hands on. The reality of death, the fact of death, is confronted, not avoided.”
on March 16, 2009 10 comments: