I wanted to watch Sawariya out of the two because it’s from one of my favorite director – Sanjay Leela Bhansali (SLB). His previous films have been great examples of creative excellence and I did expect the same from the director this time too.

But, When the two films released, the critics happily took the side of “Om Shanti Om“(OSO) They thought Sawariya was boring and dull and on the other hand OSO as colorful and entertainer. I never go by the reviews in a newspaper from one person who does not necessarily represent the entire population. But when viewers too said the same I was slightly disappointed and thought that out of the two OSO is a winner.

My friends obviously turned towards OSO and I too thought that it might be good to catch some laugh as it claims to be an entertainer. I watched OSO and returned back with an headache. It was horrible, as I had expected. Only nice thing about the film is Deepika, fresh and bright. I should also mention one scene in the movie where I laughed a lot; Sharuk’s Tamil actor imitation with a stuffed tiger. The last time a scene had brought tears in my eyes before this was a scene of frog’s death in Shrek-3. But other than this the movie had a very boring plot. After Chak De I had a little more expectation from Sharuk to do meaningful roles. Most of the time I felt, everyone was overacting; the colors and emotions were too loud

Anyway, nothing much remains to be told about this movie. Finally I decided to watch Sawariya and saw that they were disappearing from the theaters. Finally got a ticket and watched it last weekend. And I loved it.

The movie is different in the way the story has been narrated or shown; probably that is why people did not like it. It takes you to an imaginary town where every corner has beautiful architecture. The color of the movie is blue….everywhere it’s blue, probably to depict the mood of the heroine, I guess. I had predicted the ending based on this choice of color too. Green was the second color in line, which I think, defines the character of the hero. 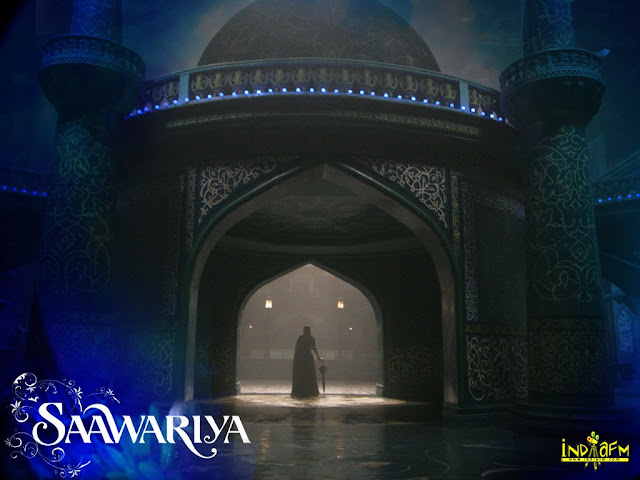 Ranbir and Sonam are too excellent performers. I do not consider them glamorous but they surely will come up based on their acting skills, they have it in them.

The best part of SLB is the narration, which is very poetic. The scenes are creative and that supersedes all the other elements; 10 sweet little songs (Mostly short) describe different emotions. Rani rocks in even a very small role.

Yes the script is weak, but still I think it’s far far better than OSO kind of movies. I could at least cherish the director’s brilliance and creativity to take us to an imaginary world and to say several thoughts in form a song or expression rather than words. The first song were the actor cheers up a bunch of prostitutes speak more than what is heard. His conversation with the old land lady tries to express few more thoughts. Sawariya is more HUMAN.

To me Sawariya undoubtedly, is the winner. 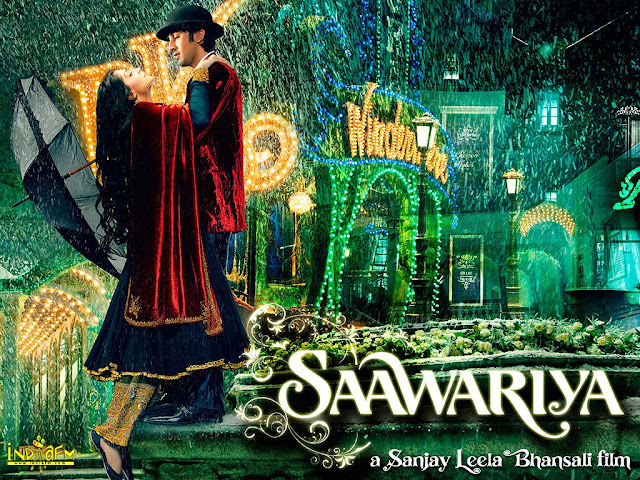 This time our trip in Maharstra was a holy trip to several temples. My sister’s family, uncle’s family and I set off on this journey on a Saturday morning. My cousin and I enjoyed the back seat discussing the game - Age of empires which is my latest craze. We first stopped at Ranjangav which has one of the Asta vinayaka’s. Maharastra has 8 udbhav (Naturally formed) Ganesha idols.

We had good delicious Prasad as lunch at the temple.

From here we drove to Shani Shinganpur. This is a very sacred place. A stone symbolizing lord Shani is worshipped by devotees. We performed few puja and then drove to a near by temple called Renukamatha temple. This temple has interiors covered with glass. The temple was built in 1954 and the glass work was done in 1988. It also houses a Yajur Veda school.

Our next stop was Shirdi. We reached there by 9:00 PM and booked a hotel. All the lodge owners say any rate that they wish; we have to bargain a lot for a decent price. Since it was late in the night, we hardly had any difficulty in getting darshan at temple.

Next morning, my cousin and I walked back to the temple and saw the museum, Chavadi – were baba used to live and sacred fire lit by baba that is not let to die off till date. 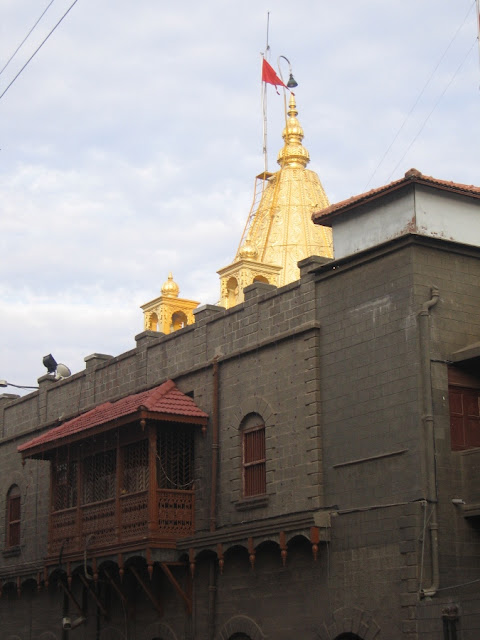 We then drove to another of Asta vinayaka at Wojar. It’s a beautiful place at a bank of some river. 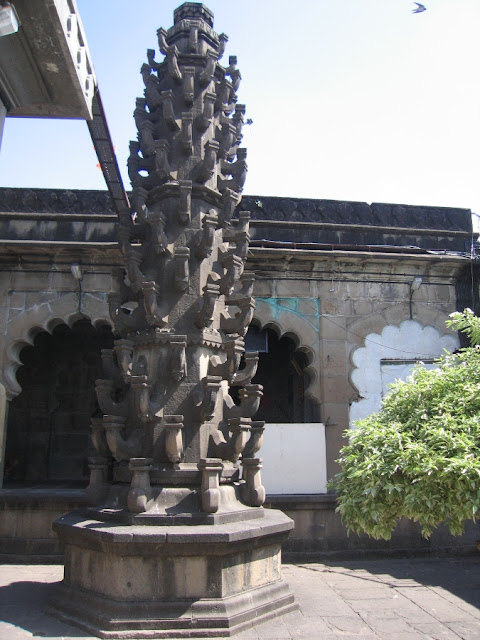 Our next stop was another of Asta vinayak at Lenadri. This place is really cool and the main shrine is in a cave on top of a mountain. It was a good hike. 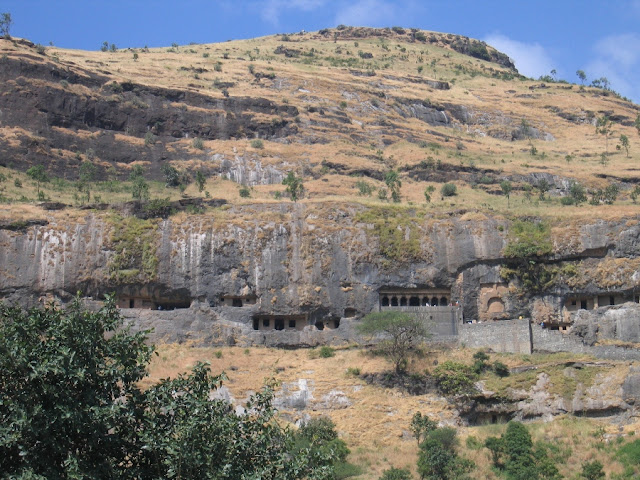 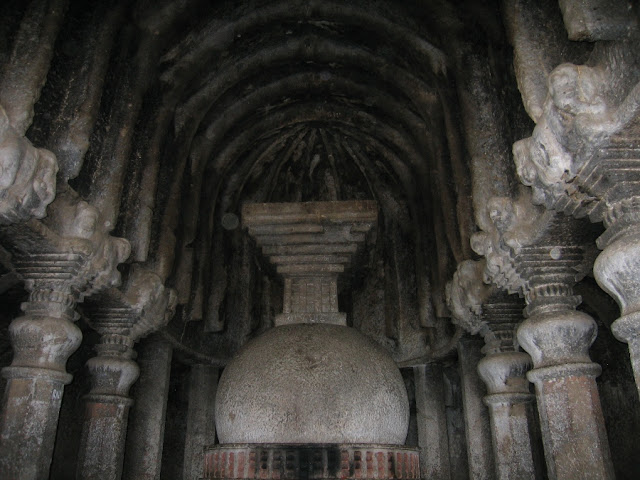 From here we drove to Bhimashankar temple. The drive is simply amazing; through the Western Ghats; truly mesmerizing views. On the way we saw Bheema dam. 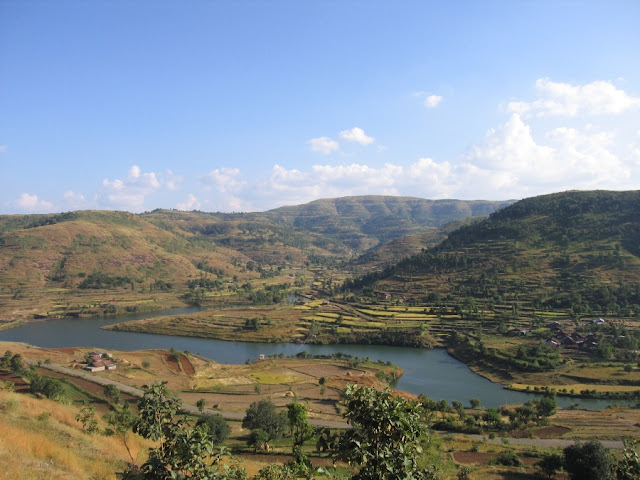 Bhimashankar Temple is 800 years and has beautiful stone carvings and also is famous for the Jyothirlinga. 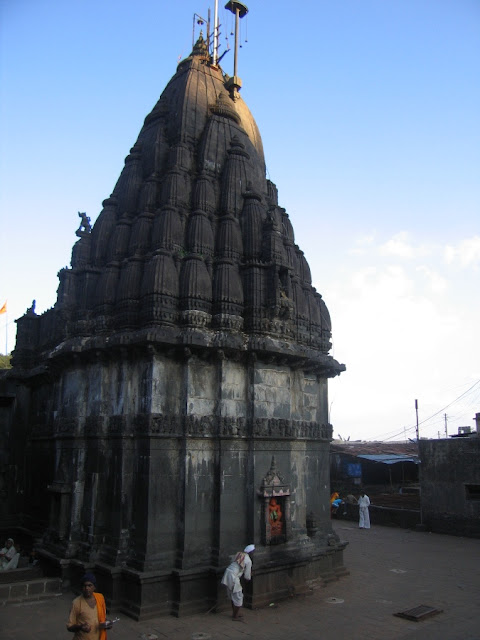 Rest of the days I relaxed at my sister’s house in New panvel. I took a bicycle ride around panvel one morning and most of the time just relaxed my mind; watched “Jab We Met “and liked it. I Tasted maharastrian food like Dhabeli, Vada Pav and many more dishes that my sister prepared.

New Bombay has good wide roads and the infrastructure is well planned.
There is a mall craze here; lots of small malls.
Deepavali is loaded with crackers, much more than anywhere I have seen.

This trip was much relaxing one for me to be with my sister and her family. More than that, I enjoyed exploring myself even more. Silence conquered me and mind began to wash away my issues. Few breaks like this where one can just simply think the least about all the tensions and allow it to dissolve themselves is a very good medicine I think.
on November 16, 2007 9 comments:

Krish and I decided to attend Mysore Dasara this time. Mysore Dasara is one of the most famous event and people from all over the world want to take home some glimpses of this event. Since a week we have been planning this trip. Events lists downloaded, train and bus timings verified, hotel availability discussed among friends who have lived in Mysore; and all things finalized by Friday evening.

On Saturday, the 20th of October 2007, Krish, Seb, Chandra and I met at KSRTC bus stand, Bangalore and we left to Srirangapatna, a place only 15 kms from Mysore. We were told by the sources that it is impossible to find rooms in Mysore thus we thought of this alternate plan.
We reached Sriranapatna at noon. Booked a hotel room; the rates were high here too. We managed to bargain 2 rooms for Rs 650. Which is not a good deal but anyway we had our tight constraints.


After lunch we booked a Tanga (A cart driven by horse) He said he would charge only Rs 40 per head and show us the entire town. We gladly boarded and began an excellent ride. Srirangapatna is a fort town, the entire town lies inside the fort which now is in ruins. We stopped at the Ranganatha swamy temple. The amazing architecture here is worth a visit. And the magnificent idol of Lord Vishnu sleeping on a Kalinga with Godess Lakshmi by his feet is a beautiful sight. The huge idol is decorated gorgeously. 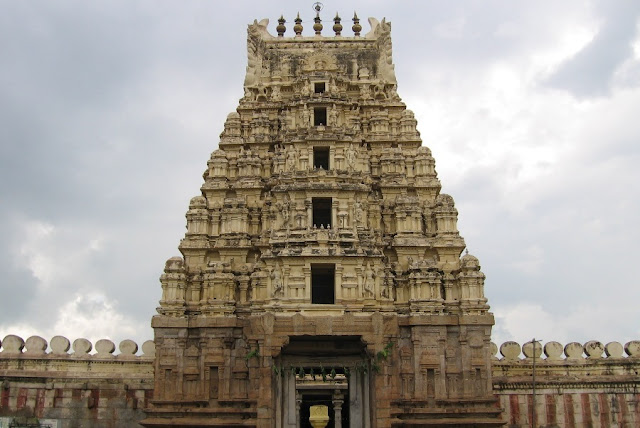 From here we reached Tipu’s Dungeon, were he used to hold captured British soldiers. The sight of the peacefully flowing Cauvery River from here is a famous view point. We then took a ride along the town saw few places like –Palace of Tipu which now is in ruins after a fire completely destroyed it; place where Tipu died and a place called water tank which is the route from where few disloyal men of Tipu showed British the way into the fort. Fort could have been entered only through the river side and this route was shown by two of Tipu’s men themselves; also visited Jama Masjid, which has a nice architect. 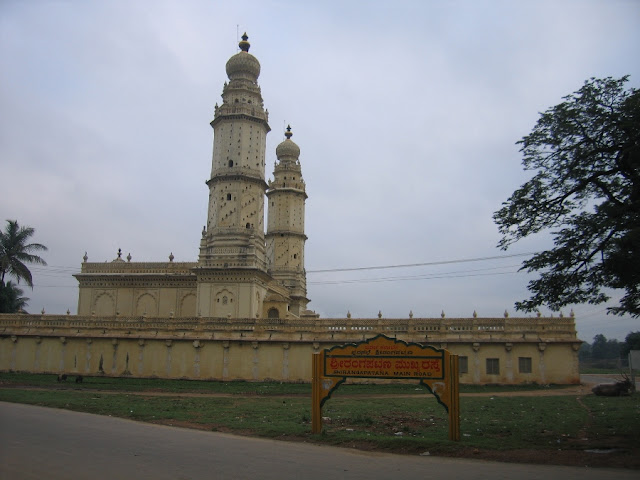 
We then went to Tipu’s summer retreat palace. The palace is magnificent and the walls are painted completely with stories of Tipu. Inside the palace which is now a museum are several old paintings. 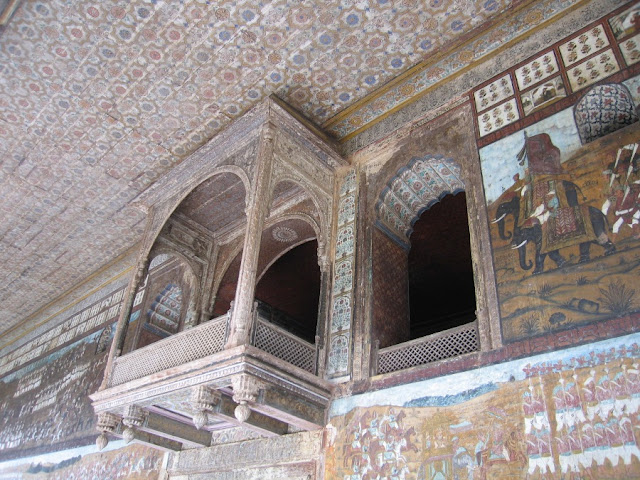 We then left to Mysore. Directly went to the palace. The palace looked beautiful as ever. We watched some folk dance for a while and then came to know that the program we were looking forward to has been moved to another location due to the rain. We quickly took an auto to Maharaja College grounds. I noticed that the auto drivers are not as rude as the Bangalore one’s. They did charge extra but not more than a limit and were very kind and soft spoken.


Dance program by Hema Malini is the program we did not want to miss. The program started almost an hour late but was worth the wait. Hema Malini is a wonderful dancer and she performed stories of Sati, Parvati and Durga. 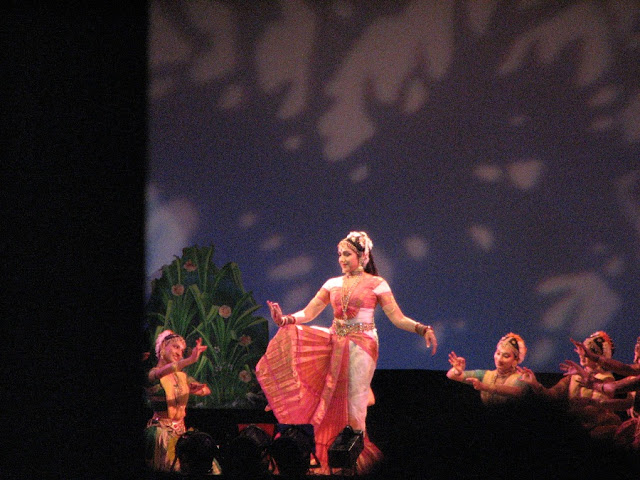 We left to Palace at 9:30 PM. We did not want to miss the lighting. The sight of the palace lit up with millions of bulb was a spectacular sight. These pictures speak for itself. 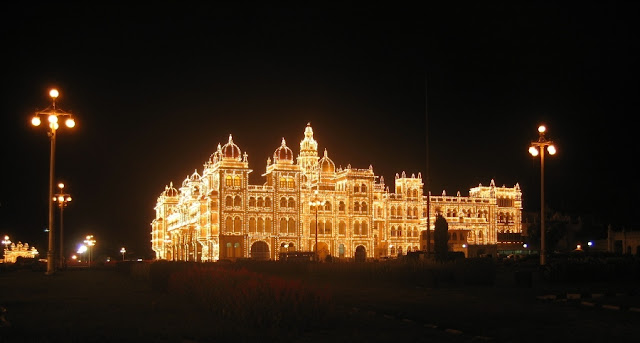 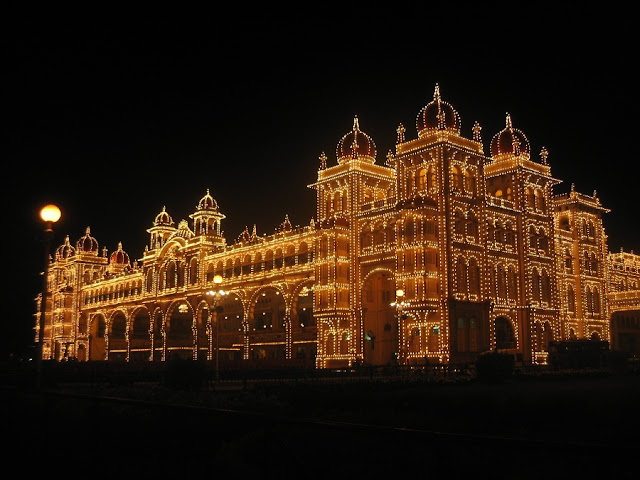 On the way back our bus hit an auto rikshaw and the sight of a woman being dragged by the auto was very horrible for me. Luckily no one was hurt. In no time we had replacement of bus through KSRTC. I am always impressed by the Goverment Transportation arrangments. They are very punctual, at least here in Karnataka.

We came back to the hotel at 12 and crashed to bed.


Next morning I took an early morning walk around the town and watched Srirangapatna wake up. Later we left to Mysore and watched it get ready for the procession. Seeing that there was enough time, we took a bus to Chamundi hills. But the driver was too slow and it took a lot of time to reach there and even up there it was terribly crowded. We struggled to find a decent shady place to sit and returned to the palace. Again we witnessed terrible crowd here too. People were sitting everywhere, on the road sides, top of every building, vehicles and it was hard to find a place. We managed to find some place but could not wait long. 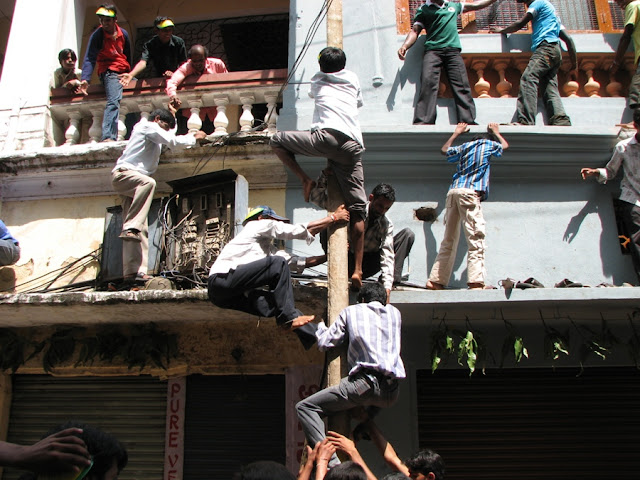 The procession was not that great either. I did not find it very interesting though. Decorated elephants were a beautiful sight but otherwise rest was not that interesting. We lost one of our friends in the crowd too. 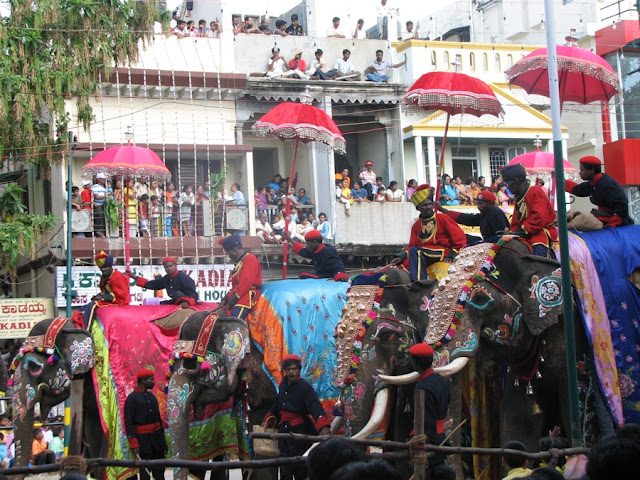 We returned early and took a Volvo back to Bangalore. Government had arranged plenty of buses for this occasion and it is definitely an appreciable effort.