When my Sister, nephew and niece came to Bangalore, I planned this trip to Coorg. I had originally planned three days stay in the south of Coorg but my delay in booking accommodation made me look for some other place. I had not explored north of Coorg, so I decided that it would be a good replacement. Somwarpet Taluk, I later found out, had a lot to offer. The place is not as known to tourists as much are the other places in Coorg. On Saturday, the 9th Of May, at around 8:00 AM , we drove away from Bangalore towards Somwarpet via Channarayapatna route. I choose Bangalore-Hassan route over Mysore route as the roads are far better and the drive would be faster. The route from Chanarayapatna to Somwarpet via Shanivarsanthe is very scenic. 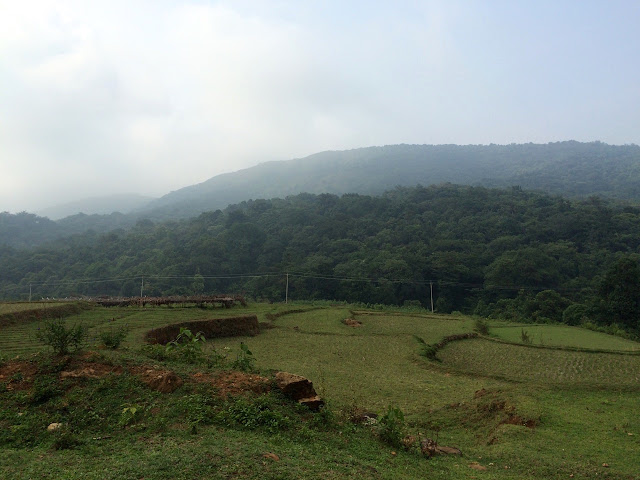 We directly went to our homestay - Aloka Residency. Aloka Residency is a nice place. They have clean and spacious rooms. They have about 4 rooms in the first floor and a pent house at the top. We had booked the penthouse. The only drawback of this place is that they order food from a local restaurant. If they could cook in-house it would complete the title - Homestay. 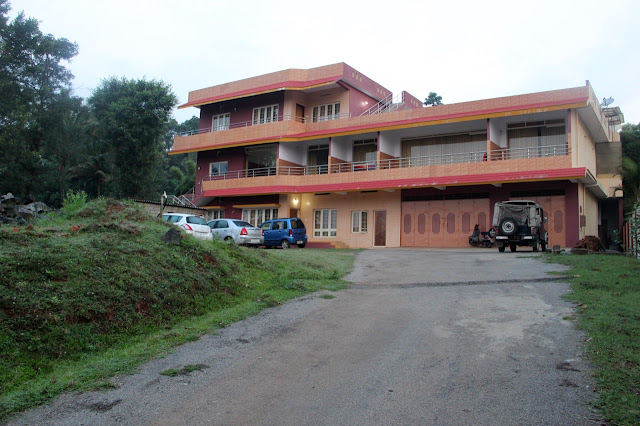 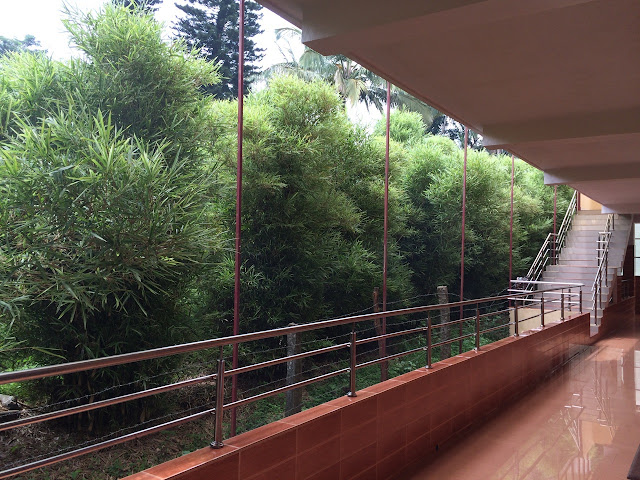 Anyways, the owner was on vacation in Kerala so we were attended by a boy named Chetan. We ordered lunch and had a good meal before we drove to Mallalli falls which is about 25 kms from Somwarpet. You could do both Pushpagiri view point and Mallali falls if you have the time.

Before heading directly to the falls, I took a short deviation at Kalkandur to visit a Jain temple. At Kalkandur, take a right deviation and enter the village. At a small store that sells grocery, I enquired with an old man about the jain temple. He pointed towards the road opposite his shop. We drove till the end of the road and checked at the house. They had no clue of a jain Basadi. So we headed back. The old man at the shop came out and checked if we had found the temple. When I said no, he wished to come along and show us. So we drove to the temple. It was  the building very next to the house where we had enquired. It was surprising that they did not know anything about it. 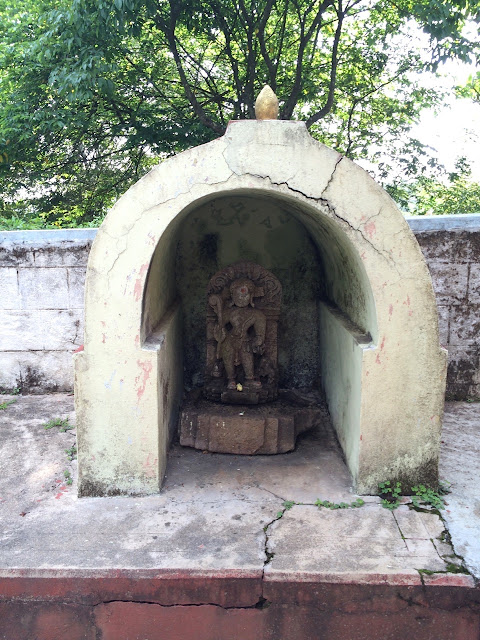 A very peaceful looking Mahavir idol was in the main shrine of this temple. After some time looking around the temple, we headed back to the main road. 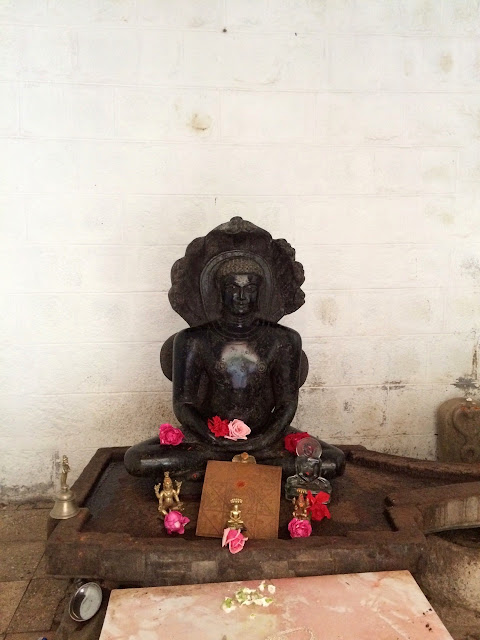 The roads to Mallalli falls is in a very bad condition as it approaches the waterfall. So we stopped about 2kms before the actual car park and walked. However, if you want to take risk, you could drive upto the parking. Many did go until there, including an Alto.

At the gate, one needs to pay a nominal fee of Rs 10 per head. A family comes here with their push cart to sell food and tasty buttermilk to tourists. We had some buttermilk. There are about 300 steps that lead you all the way to the waterfall. The descent is very steep and would require about an hour to get down and same or more to climb up. We decided to stay at the view point at about 50 steps downhill. 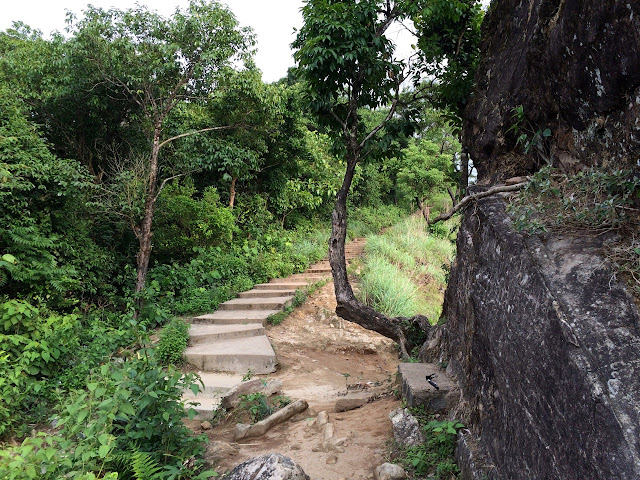 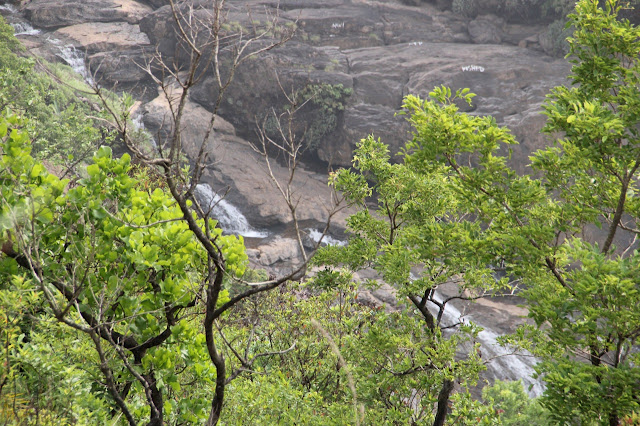 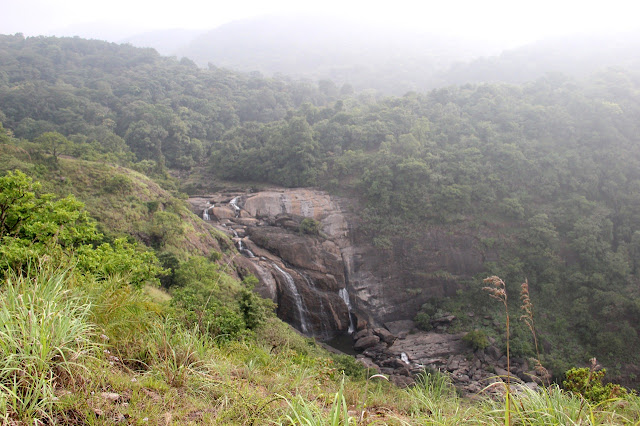 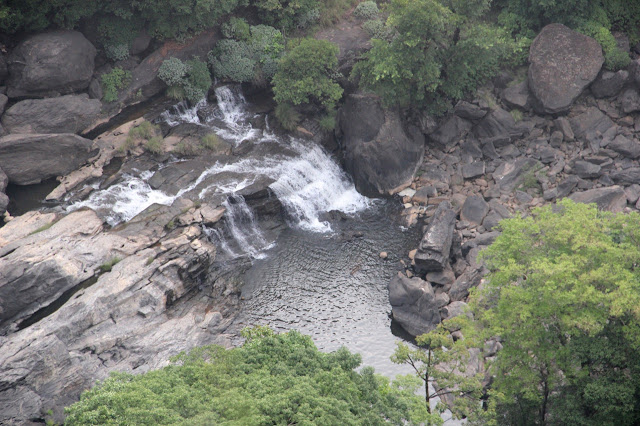 We relaxed there for awhile and watched the sun go down. The falls had not much water so many had chosen to climb down and play with the not so farocious waterfall. During rainy season it would be risky to go down. 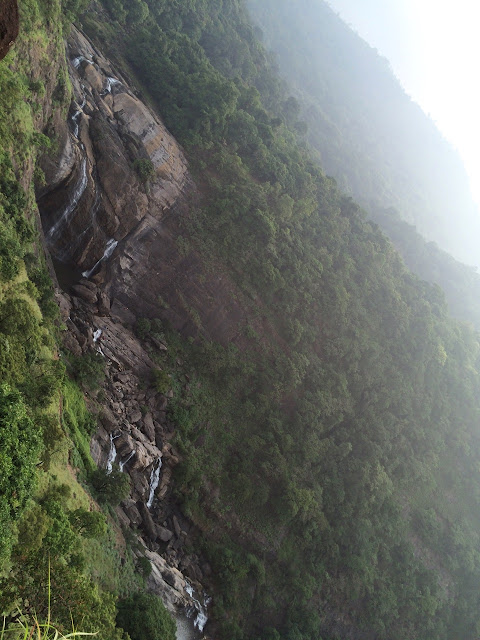 We walked back. The family selling buttermilk had packed their cart but when we expressed our desire to have some more buttermilk, they opened it up for us.

We walked back to the car and drove back to the town. On our way, we stopped at a small road side shop to have tea. The tea was very tasty. The taste of which reminded Akki and me of our Ajji (Grandmother).

A long day had come to an end. We decided to have dinner at a local vegetarian restaurant called - Surabi. There are only two pure Veg options in Somwarpet town center. This and another called Ganesh Darshini. Both are very close to the main circle at Somwarpet town.

I had been planning a trek with my friends from French class for almost an year. It had never happened until we all decided that this time there would be no procrastination. The planning itself had lots of changes though, until the very last moment. Place got changed from Channarayana Durga to Nijagal Betta. Mir joined and Aman dropped. So finally at around 6AM on a Saturday morning (May 2nd 2015), Dipali, Mir, Manohar and I, left Bangalore and headed towards Dabaspet on Tumkur road.


Soon after Dabaspet, you shall find Kamat hotel on your left. A few meter away from here, you shall see a mud road go left, underneath a railway track. Exactly opposite to this road is another Kamat restaurant on your right and a Reliance petrol bunk. Anyways, Nijagal Betta is also visible from the main road. If you are on a car, park it just before crossing the railway track, as the road conditions are pathetic. It is not a long walk from there. Bike can go all the way to the foot of the hill.

We had our breakfast at this not so good Kamat restaurant and parked our car under a tree off Tumkur road and walked to the foot of Nijagal Betta. There is a proper route upto the summit which follows the electric poles.

Nijagal Betta is nothing like what it seems from the main road. As you get past the deceiving rock that covers the front, you find a whole new world that this place hides. Built by Chikkadevaraja Wodeyar back in the 17th century, the fort gives way to a tricky trail, beyond which are the cave temple dedicated to Lord Shiva. There is also a Dargah up here. The history of Nijagal Betta involves the epic battle between Hyder Ali and Peshwa Madhavrao. 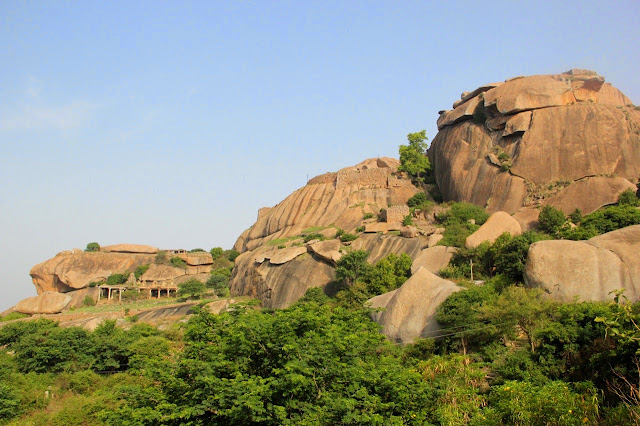 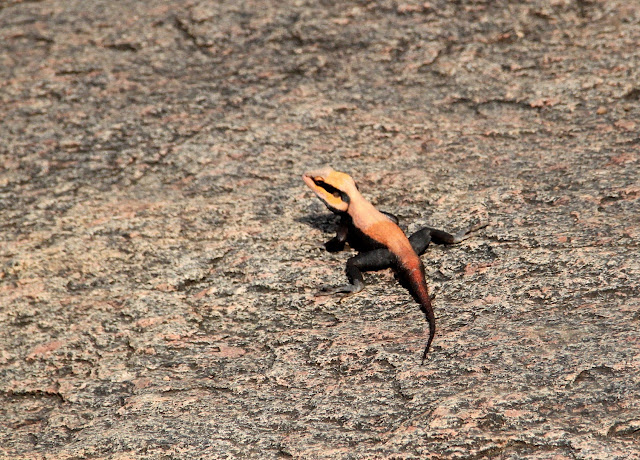 You climb a fleet of stairs and you shall end up at a beautiful cave temple. Behind which is a muslim worship place.

Here it might get a little tricky. Just adjacent to a small pond you have to climb a rock to reach the Nijagal Betta summit. The rock has few markings to aid the climb. Once you have climbed the top it takes you to a beautiful summit filled with gigantic rocks forming several shelters.

All along, we noticed lot of clothes lying around. We suspected that this place would easily be a crime spot. Being the only ones at the summit we worried of safety here. But when a guard came by later, he told us that this was a place of worship and after taking bath in the sacred pond, the devotees leave their old clothes here. That revelation was a relief to our suspicious minds which had already recreated a crime scene from what was witnessed.

We spent a good amount of time at the summit. A lot of monkeys were busy playing. But they did not bother us. 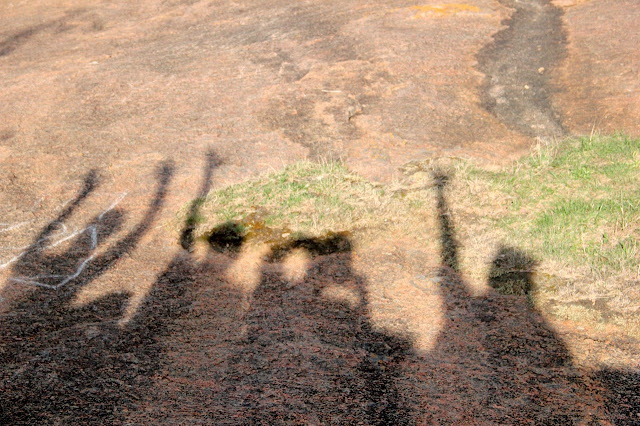 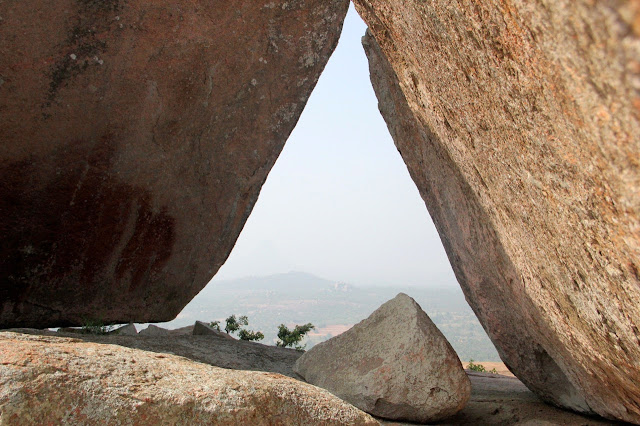 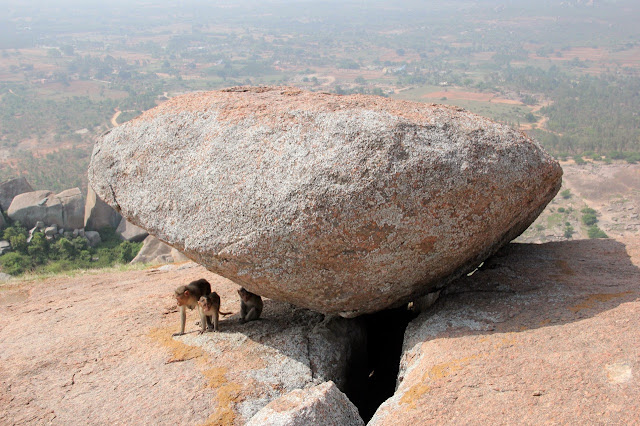 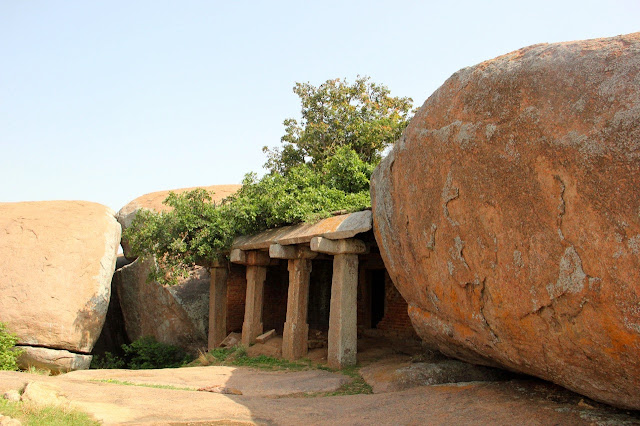 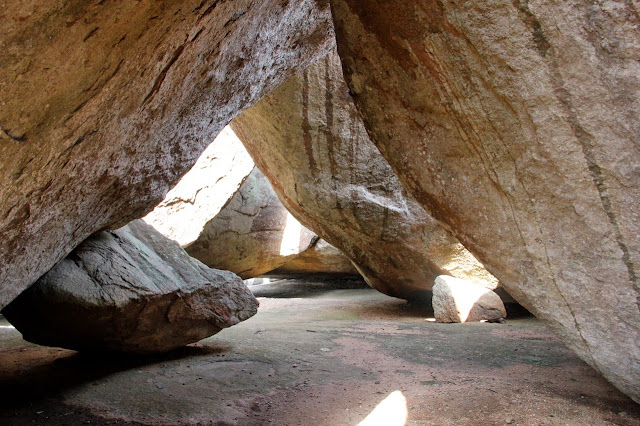 A kite was busy untangling a piece of cloth tied an electric pole. 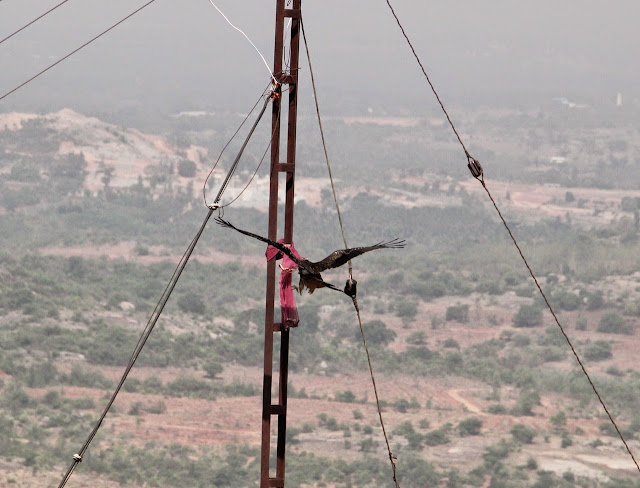 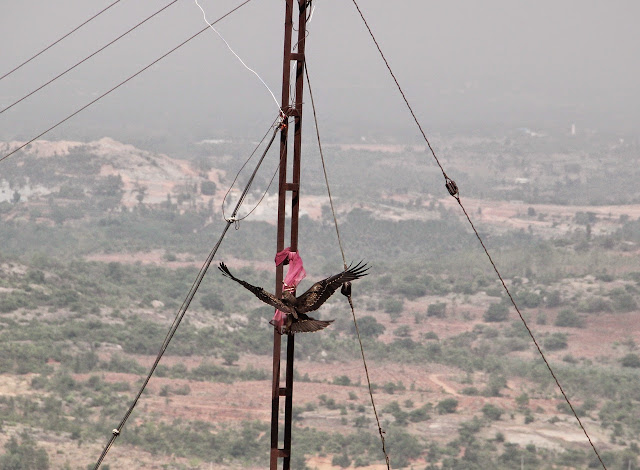 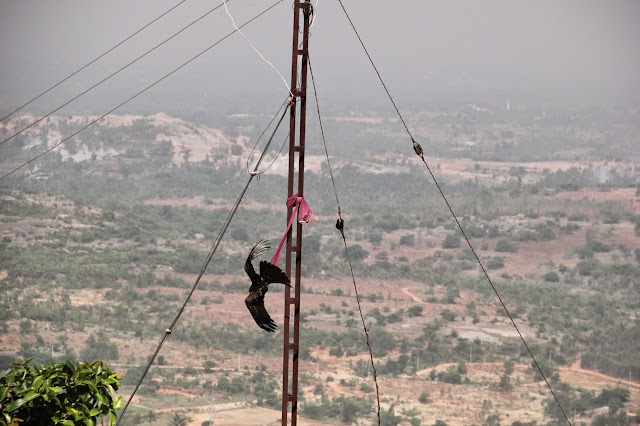 We found a good spot beneath big boulders that formed a shelter and lay there for a while chatting about life and dreams. It was a very interesting conversation that we had and the view complemented the emotion and mood. 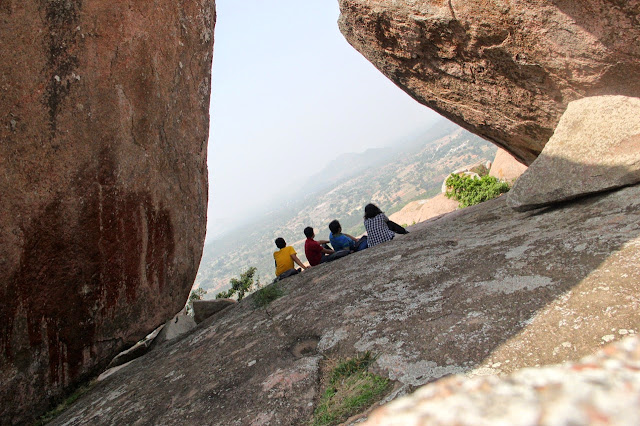 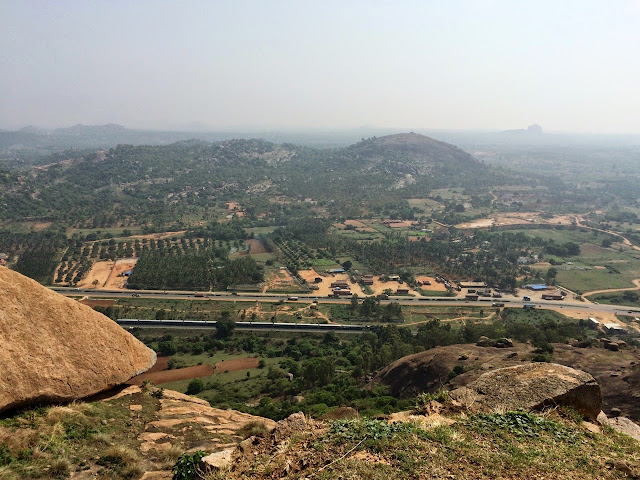 At around 11:30 AM, we decided to head back. Took a short detour to explore the temples in ruin. 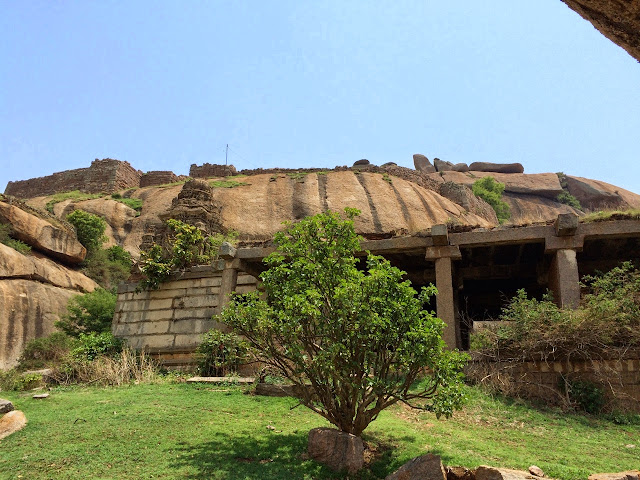 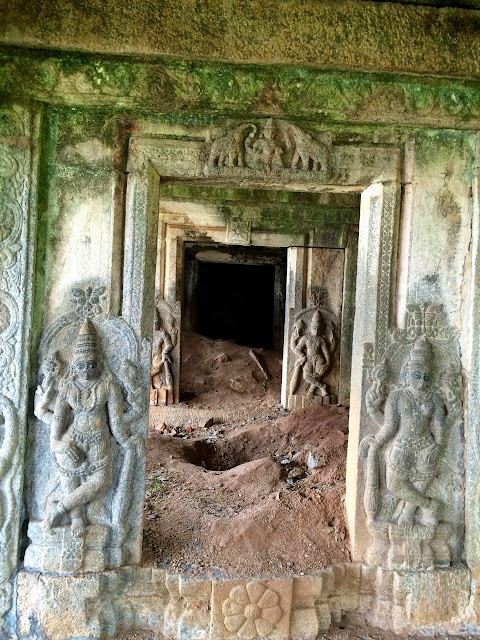 By the time we reached the base it was half past noon. We freshened up at the Kamat hotel opposite the hill and then headed back to Bangalore. At Nalapaka, near Rajajaingar a tasty North Karnataka meal awaited us. Bangalore had turned cloudy by then and we witnessed a ferocious hail storm while driving back.

Nijagal Betta is an unexplored place. The quietness and serenity there cannot be matched with any other place this close to Bangalore. This place has so much to offer that a short half day trek would be a refreshing experience.
on May 16, 2015 2 comments:

So after the previous failed  attempt to conquer Kunti Betta we, folks from the office decided to attempt it again on another night trek. 13 of us on the night of 24th April, left office at around 8:30 PM in 3 cars. We stopped at a Dabha on Mysore road for dinner. Chatting, laughing and eating, we spent almost more than 1.5 hours there. Next we drove to Pandavpura. Pandavapura is a right deviation 10-15 kilometres after Mandya on Mysore road. You shall see an arch on the right. After you take this right, keep following the road until the railway track. At the track the road turns left. Follow it until you meet a junction of four roads. An arch again on the right could be your landmark. Google map shows a wrong right turn just before this arch.

Anyways, at around 1AM we reached the base. We took the flight of stairs leading to the kalyani and temples. We followed the route beside the temple but then got deviated and then got lost in the bushes finding a way up. After some struggle, we found a route leading to the summit. The hike was very short. We made ourselves comfortable on top of a huge rock. We tried to catch some sleep. Some did, some just stayed awake till the morning. Around 4 AM another group came. We all cramped in, at the summit.

As the first light of dawn broke, we saw that the pillar that many bloggers had talked about was on the adjacent hill. We had boarded a wrong hill again. The previous one was called Bheemana betta. Considering nothing named after Nakula and Sahadeva (The last two brothers of Pandava), we decided to name this after them. I later found out that this second hill is called Onake Betta. 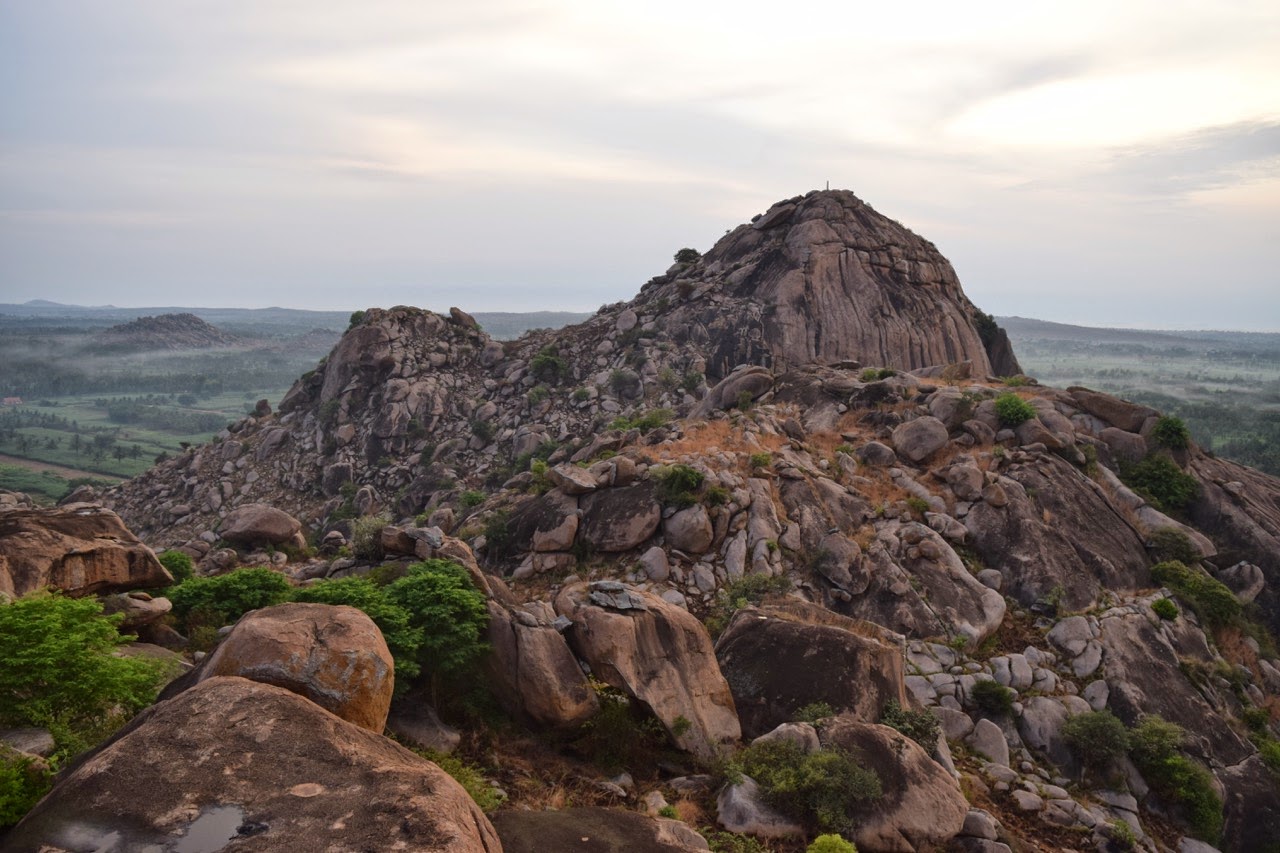 At least we knew now which was Kunti Betta.  As its the only one that remains to be climbed in the vicinity. We had to follow the road next to Kalyani all the way instead of taking that deviation.Thankfully, despite the weather report not a single drop of rain ruined our trek. And it was a beautiful feeling waking up to a magnificent view. Only thing missing was a cup of tea. 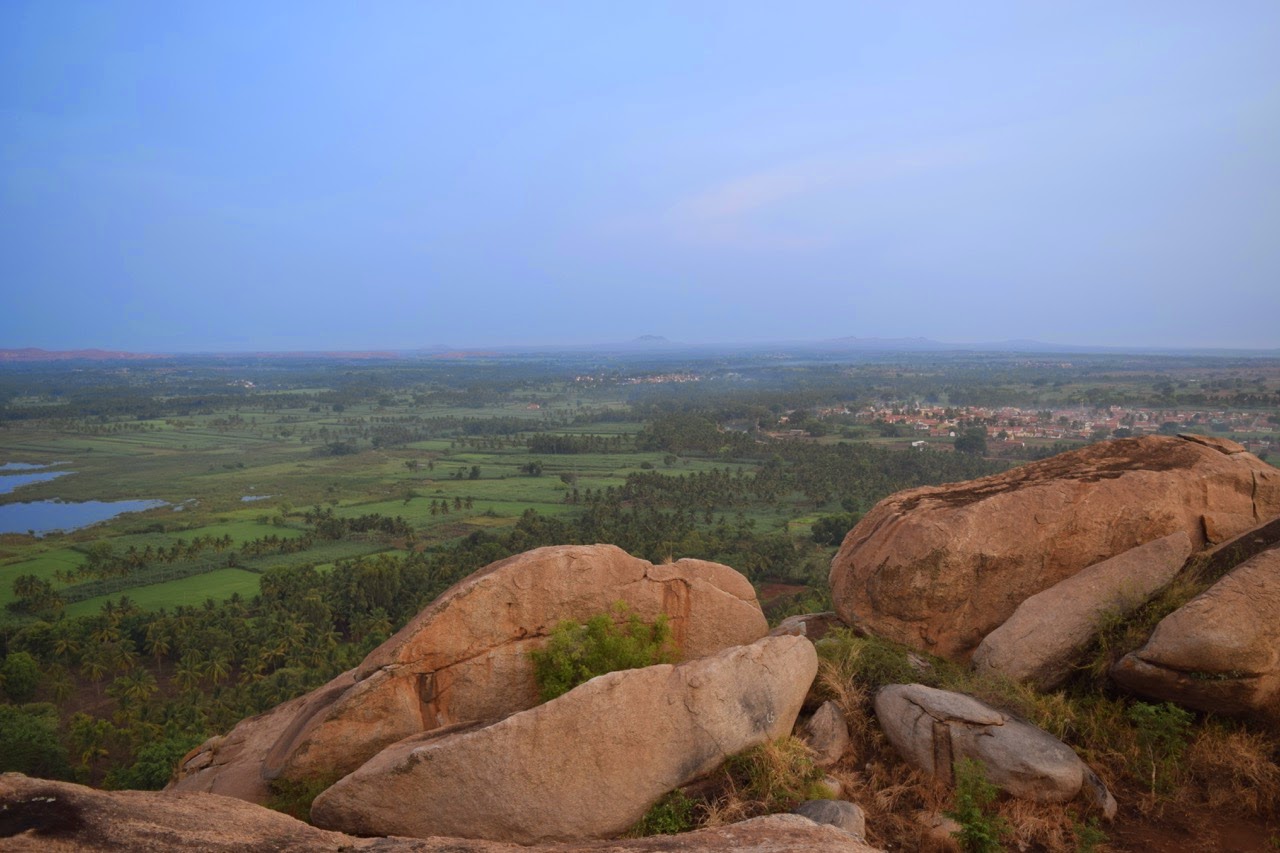 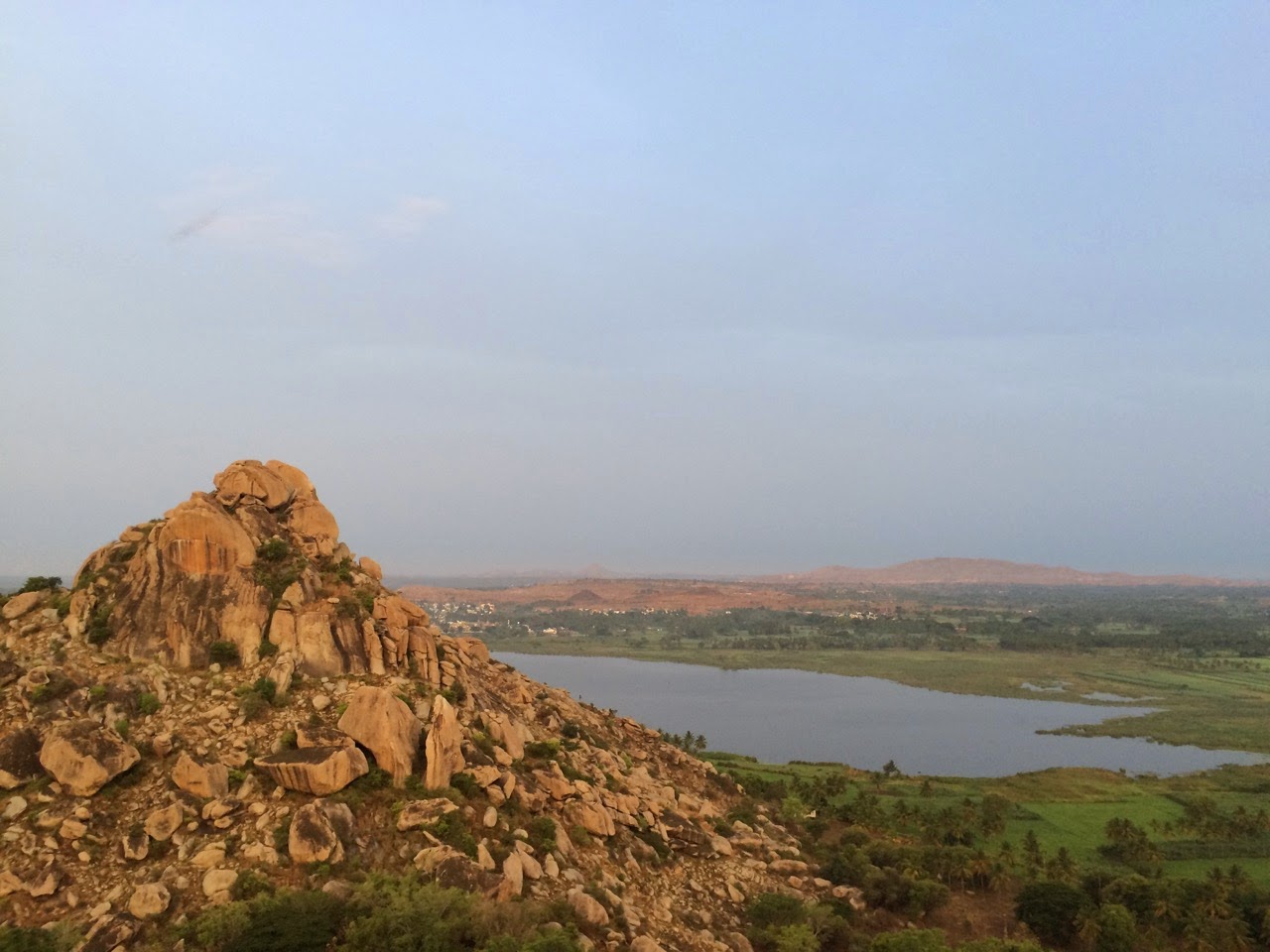 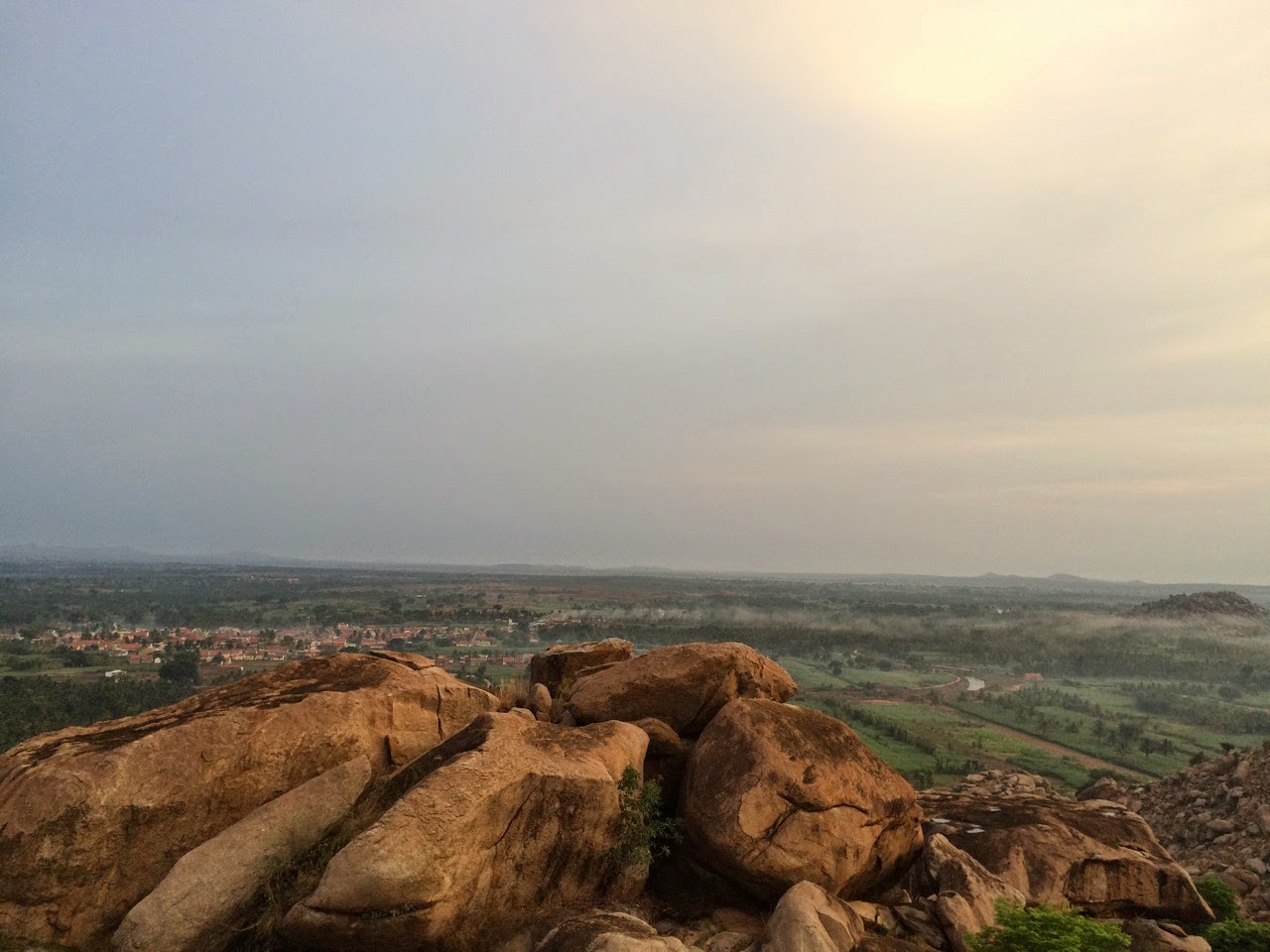 We walked down the route that was instructed in many blogs and ended at the slope near Kalyani. 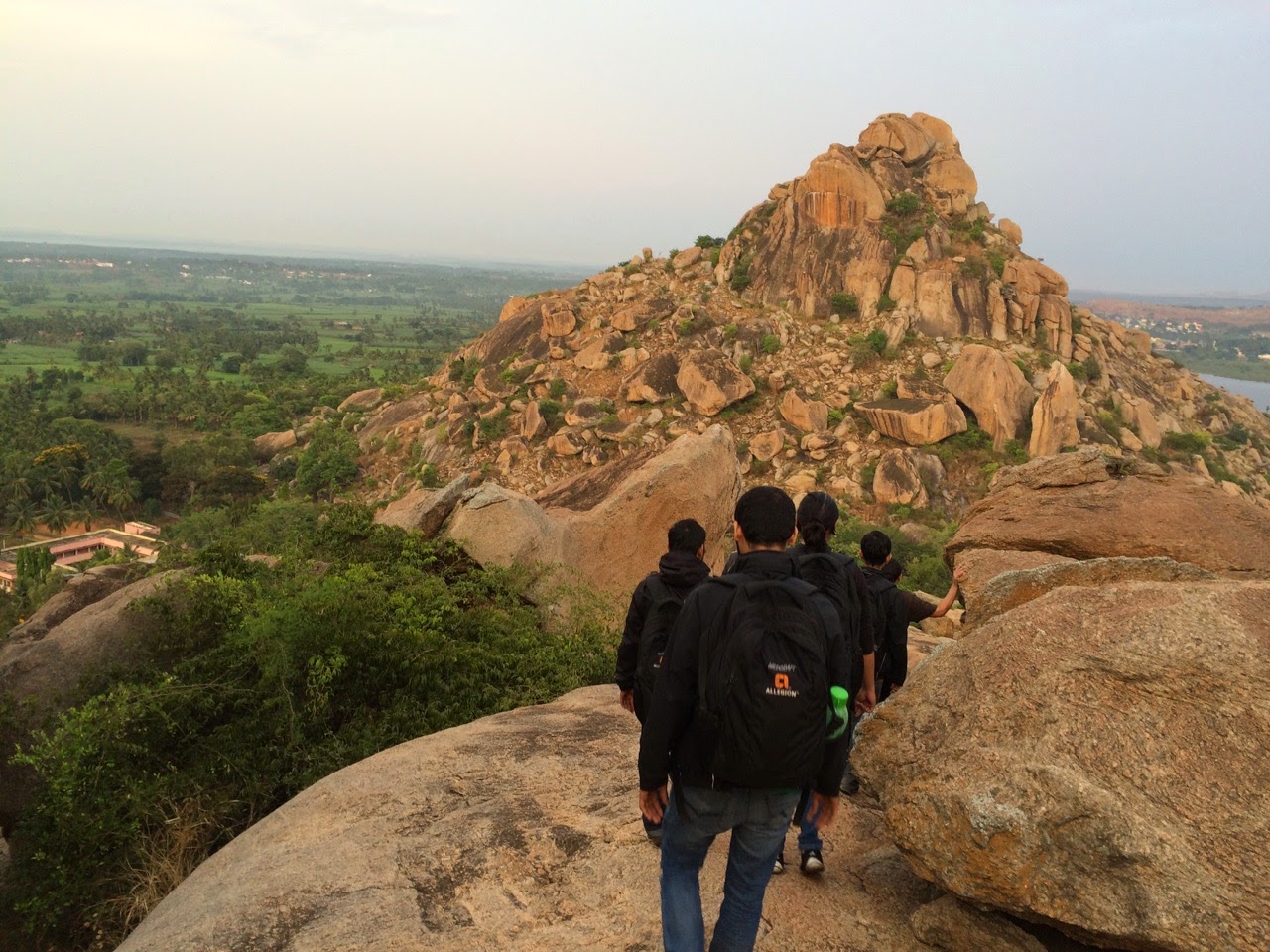 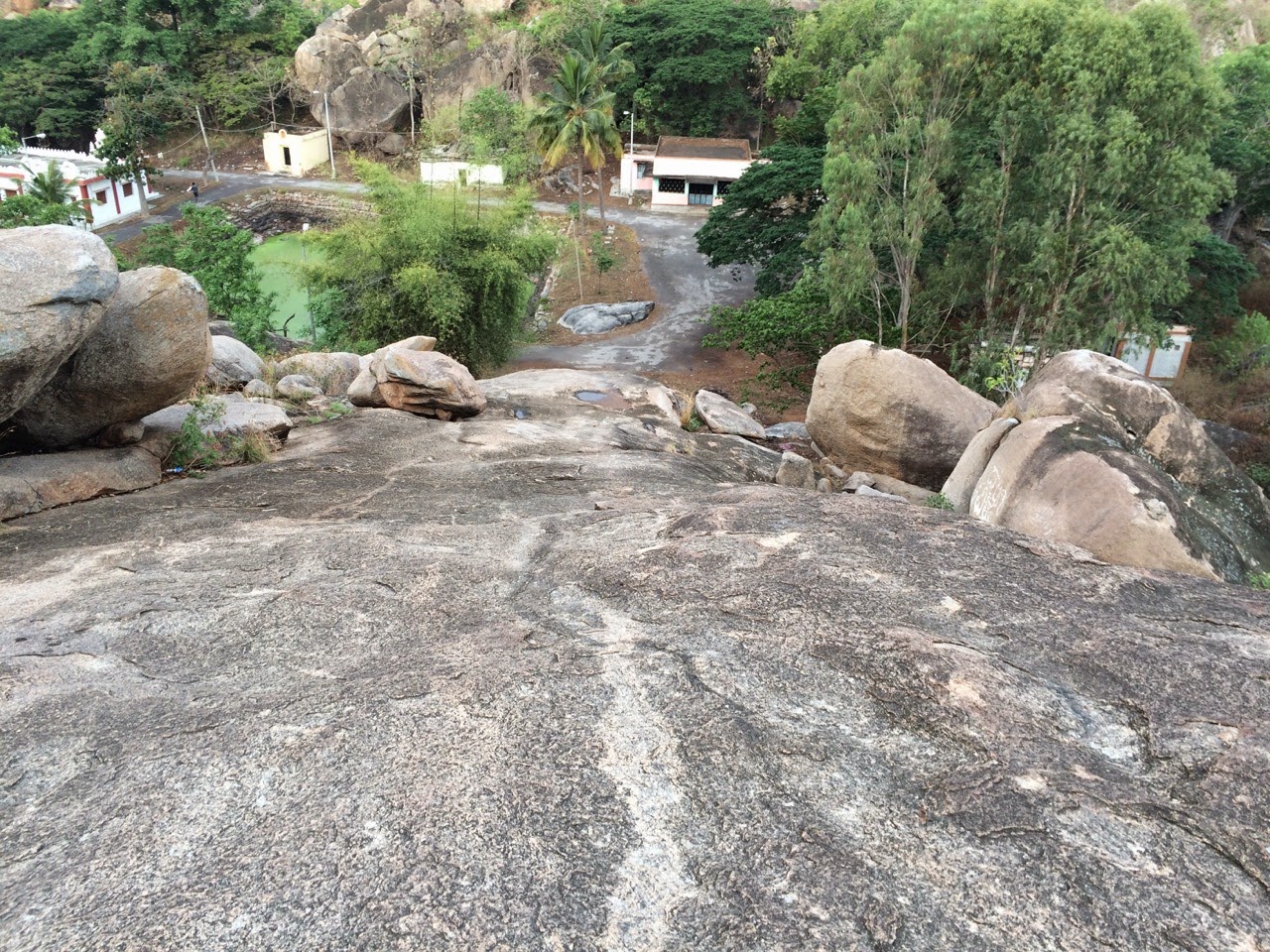 We stopped at a local tea stall and had the much needed morning tea. On our way back, we also stopped at Maddur Tiffianys to have some breakfast. There are lots of other options on the way. By 10:30 AM, I was back home. The sleep that followed after an early lunch was the best I had had in days.
on May 03, 2015 1 comment: