These are two of my creations from previous weekend. Certainly not a masterpiece, but remaining pieces of my hobbies. :-) I think the painting goes well with the story too. 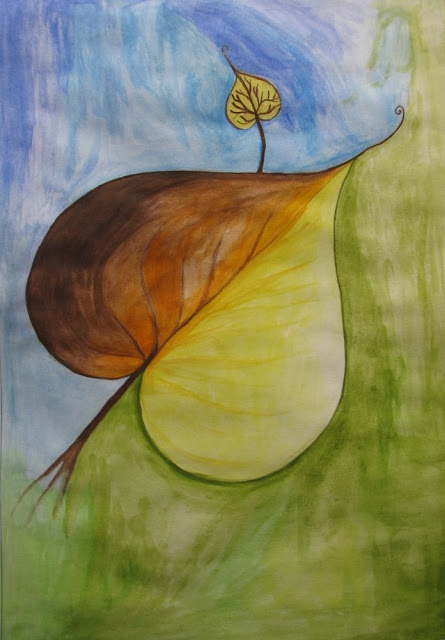 
He watched the screen, as it changed the display one after another; as it altered lights and colors one above another. His eyes glued to them and meanwhile, outside twilight slowly faded away.
Several images formed on the screen, displayed vibrant and sometimes blur ones. And suddenly it happened; something that does not happen always; the screen turned mirror. He was not looking through the screen anymore, but the screen (now turned mirror) began to look through him. He felt transparent; an uncomfortable feeling began to shadow him. Mirrors cannot be pleasant always, especially when they dig deep into you. It showed now, images that were unheeded, that lay somewhere in the dark side, in someplace untouched. But the reflections brought them all back.


Slowly after a while the mirror turned back into a screen. It displayed colors new, unknown to him yet and he began to look through the screen. It showed something bright, something which is perhaps possible. His eyes tried to merge with the reflections from it, there began a blending of thoughts and then there was darkness. There was nothing more to see or say.


He sat in the dark watching the curtains flutter with the wind from a fan and dim lights from the street flowing into the room, gracefully illuminating the darkness. Silence (Except the sound of fan blades thinning out the wind) became enjoyable and his mind reached a point of complete emptiness. He felt that his emotions were nothing unique or exceptional but a commonly shared occurrence with at least a few (If not many); somewhere beyond that screen.


For at least sometime after this screen to mirror and back to screen thing happened to him; he felt lighter as though a major burden had driven away.
on February 28, 2009 20 comments:

Email ThisBlogThis!Share to TwitterShare to FacebookShare to Pinterest
Labels: Literature

When I was in Coimbatore this Jan, I visited few of P’s uncles and aunts. It was fun knowing people and realizing that you have suddenly become part of a bigger family. Visit to Palakad, and staying in the old mansion designed and built by P’s grandpa; filled with beautiful antique pieces was really exciting.

P's grandpa passed away last May, almost 45 years after gandma died. I have never seen him in person, but this room of his appeared so much full of life. 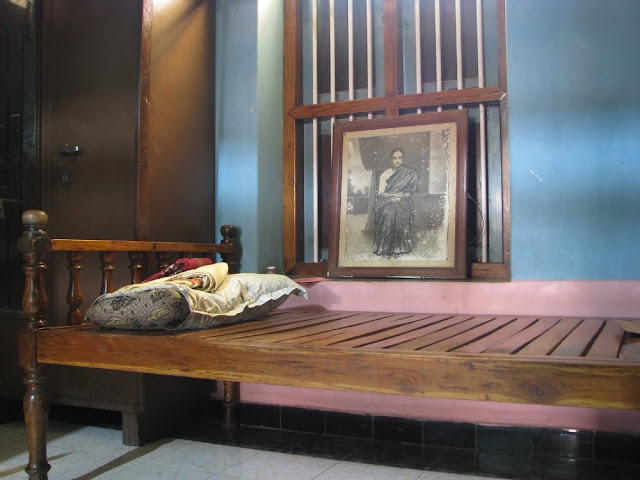 But what I enjoyed the most during this trip, was speaking to P’s little cousins. In them I saw a new generation, totally different from what I have seen growing up. Each one of them are so talented, so creativity.

A sweet little 4 year old, does all her work by herself. She has already placed her tiny foot into the world of classical dancing. He brother after returning from school goes to music classes before he sets off to learn playing shuttle badminton.

Two other cousins’ of P are superbly talented in Skating. Lakshu and her brother Sachin displayed for us, some of their skills on the wheels. The siblings are good at Yoga, Abacas and Skating. Another cousin of P is a good dancer and has also recently started learning Violin.

Among my cousin’s; few are of this age and are very talented. Some are well trained classical singers already. My Sister & cousin are grooming their sons to be a good vocalist along with their academic growth. One of them is taking classes to learn the rules if tricks of Chess.

What impressed me the most is that how beautifully these kids have learnt to balance their life between studies and hobbies. They have learnt so early in life to blend art with academics. I wish I had this thought when I was of their age. I only started identifying my interests after my 10th standard.

These kids, so extremely talented also very good in their studies are the future; the coming generation. One also has to recognize the efforts from the parents to develop the kids overall growth.

When I saw a couple of college going boys and girls in Bangalore; carefree in an arrogant manner; embracing the bad qualities of western culture; I wondered (worried) about the future to come. But looking at these beautifully gifted kids, I feel much better and see a brighter upcoming. 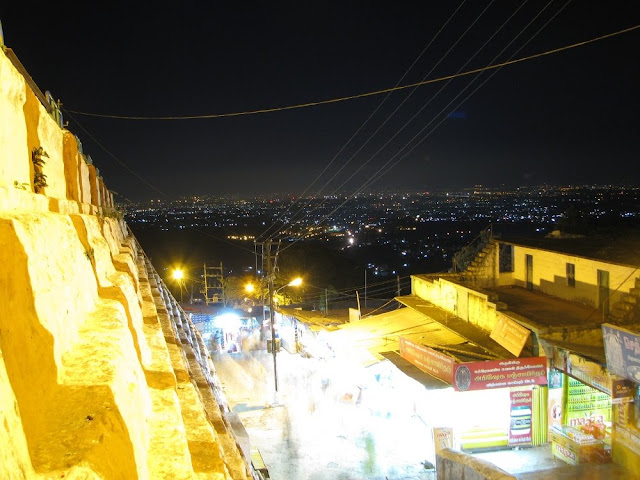 At Murugan Temple, Murudamalia, Near Coimbatore
on February 24, 2009 12 comments:

Its only after 28 years of being connected to Mangalore, I finally got to see a Dakke Bali last weekend. I had not heard much about it before, which I consider negligence on my part to ignore the cultural heritage of my hometown.
What is Dakke Balli?
An elaborate form of serpent worship, unique to Tulu Nadu. There is a distinct form of dance associated with it that is akin to yakshagana. It is performed only by a group of people who call themselves Vaidyas. The ritual starts at night and continues till dawn.
Where does it happen?
At Padoobidir, Near Mangalore. Once in two years (Year when there is no Pariyaya at Udupi) and continuously for around 2 months.
My Experience –
When I heard about Dakke Bali from P’s uncle and a possible chance to view it on Feb14th, I did not want to miss it. We were at the venue at around 10:30 PM along with P’s uncle, aunt and cousin. The ritual happens at a place closer to the beach; a certain portion of land around here, since untouched looks like a dense forest. The entire place is decorated with flowers; mainly Pingara (areca tree flowers, considered auspicious to the Serpent God) and several other types to enhance the beauty. The entire place is lit by lamps and only few lanterns with absolutely no artificial lighting. This natural lighting augments the beauty of flower beds to look even more glorious. Photography is strictly prohibited.
There is no temple or shrine but for few Udbhav lingas of local deity Naga Brahma. Uncle tells me that no offerings in any form are accepted here other than the Dake Bali ritual. Unlike in other temples no dakshina of any kind is offered to the shrine or the priest. Every evening the flowers are brought to the venue and from 6 to almost 10:30 the venue is decorated with thousands of flowers.
At 10:45 the first Bali started. Two old men after taking bath in a pond, appear along with few other who play Dakke (Damroo). First, the deity is worshiped and then the two old men (Naga Patris) are now possessed by the Naga Brahma. They trace the path of a man with Dakke called Nagakannike. They also pick fired sticks and show it in several directions pointing to the sky. Uncle explains that he can see other Ganas (Spirits) in those directions.
Both men who acquire the spirit are very old; One in his mid 80’s and other mid 60’s. Their responsibility is not inherited. A genuine, eligible person should replace them approved by Astamangala Prashna (A beautiful form of astrology mix debate form of arriving at root cause of any problems; used mainly in temples) and till date there has been no eligible replacement for this community. The number of patris performing Dakke Bali has now reduced from 9 to only 2.
At 12:30 the first session is over and we are offered Pingara from the Patris themselves. Next there is a break till 3:30 AM. We try to catch some sleep after choosing a best spot for the next ritual. Some volunteers are drawing mandala (a design similar to Rangoli representing wholeness and life) with mostly natural colors. At 3:45 AM the next Bali starts. Now Nagakanike is dressed royally in traditional silk kurta, kacha and peta. He dances around the mandala in a unique way as he and three other holding damroo sing in praise of lord. The song is similar to that of Yakshagana. Patris take a holy dip in lake and appear again. After pooja the dance around the mandala continues with the Patris, now possessed, follow the nagakanike. They rub Pingara on their face which makes them look like a serpent. The music and dance makes the place more mystic. Dakke Bali and Naga mandala depicts the divine union of male and female snakes.
At 5:00 AM the Bali ends with two patri’s rubbing bundles of pingara on their face. The entire decoration is pulled apart and everything on it, including flowers, tender coconut, fruits are offered to the devotees.
The entire devotional atmosphere created there was amazing. Belief and faith can have no restrictions unless it does not effect someone else. By dawn, like several others, there was different feeling of being part of something magical.
on February 18, 2009 11 comments: