December 09 was hectic, with running around looking at apartments that could suit both our taste and budget. This turned out to be a stressful ride. But finally one house, 2 streets behind the old, greeted us with some sort of an unexplainable serenity.

One of the most irritating task of living in a rented house can also be one of the most exciting one’s – changing homes. It gives one a chance to re-create things, add or subtract some. With help of my friend Bat, cousin N and watchman Prathap, I shifted most of the stuff on the last week of January, before P and I could re-arrange things in our new home.

While moving my TV stand, I recollected the pages from a novel (A Home at the end of the world)-
(Clare watches the street from her apartment window as people take away the furniture’s discarded by them)

“So long, treasures,” Clare said. Her breath made a spool-shaped flicker of steam on the glass.

“So long, old garbage from thrift-store bins,” Jonathan said. “Honey, there are times when nostalgia is simply not called for.”

“I dragged that sofa down here from Sixty-seventh Street,” she said. “Years ago, with Stephen Cooper and Little Bill. We’d carry the damn thing a few blocks, stop and sit on it, then walk another few blocks. It took us all night. Sometimes bag people would sit on it with us, and we’d all have a beer. We made a lot of friends that night.”

Well I dint make any friends, instead got several staring eyes wondering what lay beneath the blanket I had covered the television set with. :-) 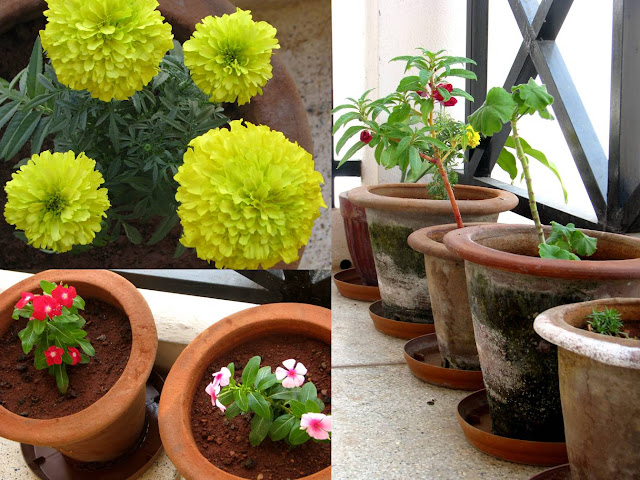 Feb and March has gone by with decorating the house, inviting a group of friends for dinner, watching plays and Yakshagana along with friends, few travels, visiting a neighborhood temple, adding new plants to the garden and few new creative ideas of which I shall write in a future post.

Most important, the new home is far away from main road, unlike the old house which was bang next to the busy main road and at nights it felt as though vehicles passed over our heads. :-)

On the contrary the new house balconies are frequetly visited by lots of pigeons, eagles and squirrels.
on March 21, 2010 9 comments: 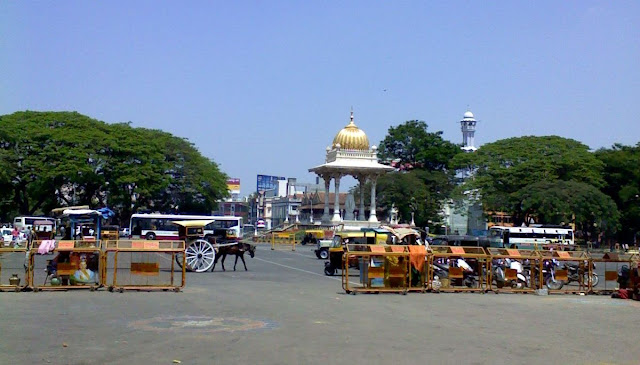 Trip to Mysore was a very quickly decided. We have relatives there but have never visited them and so my wife P and I decide to go see them. On Feb27th, we took a bus to the Royal city and by afternoon we were there; first stop was near Harsha Bar, Bogadi. My cousin had warned me to wait there until she came and not enter the bar. :-) A few minutes’ walk and we reach her house, have good lunch and chat with her extremely creative son who has built a Yo Yo out of Vaseline tin, ear-phones out of waste speakers and a recycled drum out of waste plastic cans and taps. I browsed through his stamp collection, added one to it from my pocket and played videogame, cricket and throw-ball with the boy. My Cousin’s husband dropped us to P’s aunts’ house in Hebbal.

P’s uncle is a wonderful man and is always full of stories and I enjoy his company the most. He returned from Bangalore at around 10pm after which we had dinner together and discussed lot of things which I hardly remember now, perhaps it was those kind of talks that are spoken and get evaporated rather quickly into the flowing air and does not seep into the flesh and blood; perhaps that’s what they call light talks. 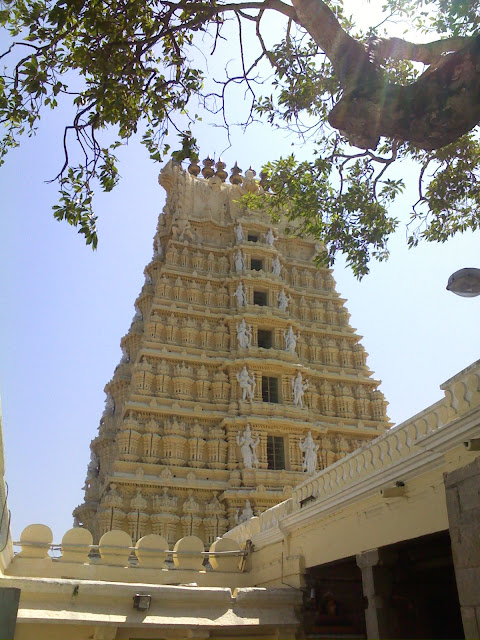 Next morning after a delicious breakfast (loooots of idlis) we drove to Chamundi hills. A 100 Rupee ticket got us into the main shrine in no time, another 10 Rupee to security guard got us even closer and another 10 Rupee to the priest got us the Prasada. :-) I wonder what things will turn out to be in future? I come from a place (South Canara) were no such privileges are allowed, (at least so far) however crowded the temple is. I hope these practices do not spread but to look at it with another perspective it did help my old uncle and aunt who otherwise had to stand hours together in a queue. 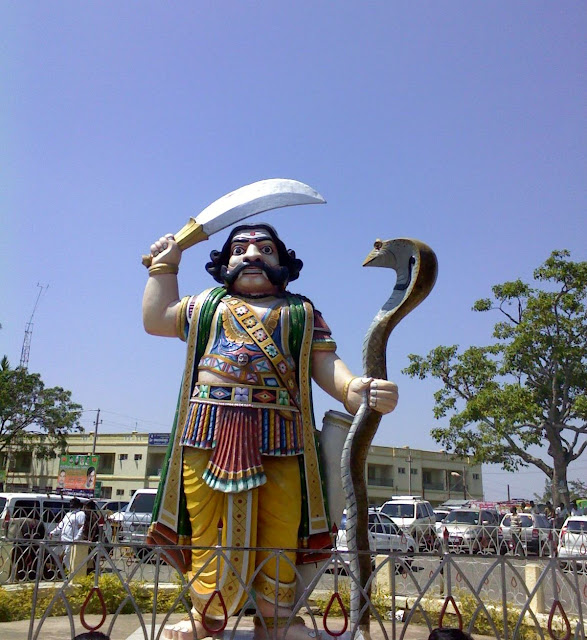 We stopped at Nandi were I bought a nice Ganesha idol made of Panchaloha to add to my Ganesha collection. 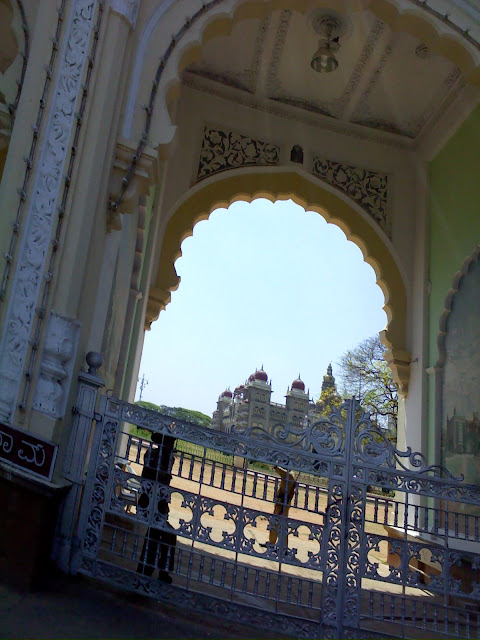 After a quick stop at Hanuman and Ganesha temple at the palace gate we returned home to taste aunt’s amazingly cooked Pasta; another round of light talks where uncle humorously referred the kids in Mysore as “Loose”, as they dump in paper cuttings with New Year wishes and what not into his post box. :-)

Uncle dropped us at the railway station around, 5pm and we found the train so crowded that we decided to take a bus, so we rush to the bus stand and drive back home in a comfortable but expensive bus than a much less expensive but terribly crowded train.
on March 13, 2010 6 comments: 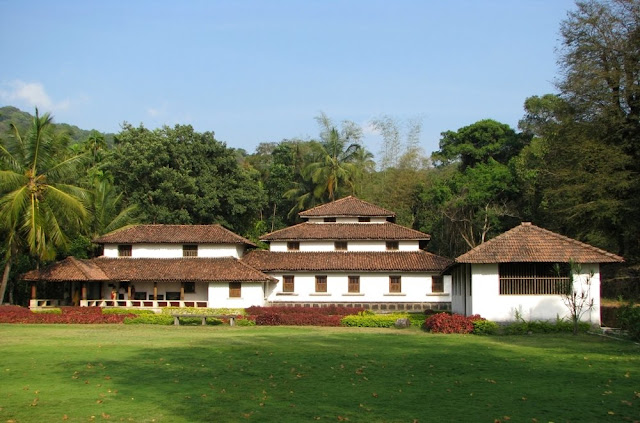 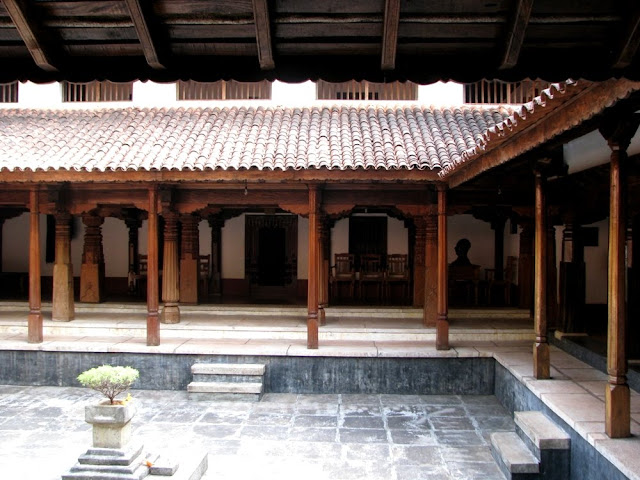 Kuppali is around 30kms from Theerthahalli and is the birth place of legendary Kannada poet/novelist, Kuvempu. We got down at the main road from where we had to walk around 1.5 kms to the centenary hall which also has several rooms for overnight stay. Unfortunately there was some program and hence all the rooms were booked. Disappointed we walked to Kuvempu’s house, a magnificent three storied house with Mangalore style tiled roof. The house is now a museum preserving the author’s belongings.

After a walk around the house, buying a book and requesting the KSRTC bus driver for a drop till main road, we walked to “Kavishaila”, memorial of the poet…on a hill top, also a beautiful sunset/sunrise point that is believed to have inspired him many a times. The pathway and the place have been masterfully modified without affecting the original beauty, with some stone pillars which look very much belonging to the sight. 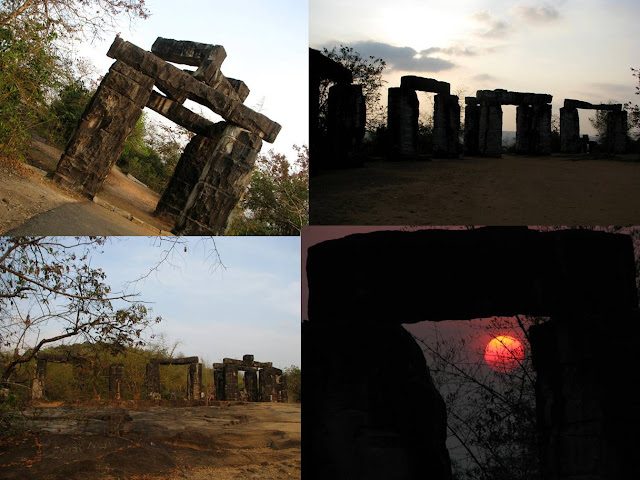 We sat there observing the sun set and a group of teachers (I guess) interrupting the silence that a place like that needs. Anyway, their talks kept us engaged and we also got to see an overly impressed lady who with her unchanging expressions made us wonder if she was impressed or depressed, we named her “Kalpana” remembering the famous Kannada actress most of whose movies are extremely sentimental.

After viewing the beautiful sunset, we walked back to the house, boarded the bus and got dropped till the main road, where we had some not so good Mangalore buns and tea. We reached Theerthahalli at around 8 and checked into a hotel. Tired by the entire day’s activity we took a short nap till 9 and then walked to Hotel Mayura for Dinner. The waiter laughed at our orders like, juice before and ice cream after dinner. Classical music from the Marikamba temple fest kept the background score running, during the dinner.

Next morning, I got up at around 7, only to find the town like 5 Am in Bangalore. We freshened up and walked to the Rameshwara temple, a beautiful ancient temple. A walk along the Tunga River was refreshing. 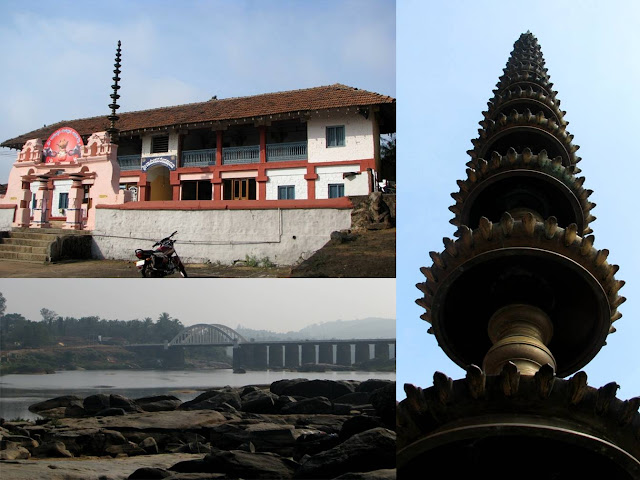 Next stop was “Bheemana Katte.”; we took a bus to Ranji katte and boarded an auto to the place. The driver asked – “Whose house?” we said – “Bheema’s.” :-) He dropped us at the Bheemeshwara Mutt. We entered the mutt and could here loud chants. Swamis were performing the daily rituals and pooja. One of them was very kind to tell us about the mutt and the village. He informed that Bheema had built a crossing out of rocks on the Tunga river and hence the name. He also recommended that we have lunch there before we left. Even though his invite was very tempting, we had to leave early so we decided to come back again to taste the food at mutt. 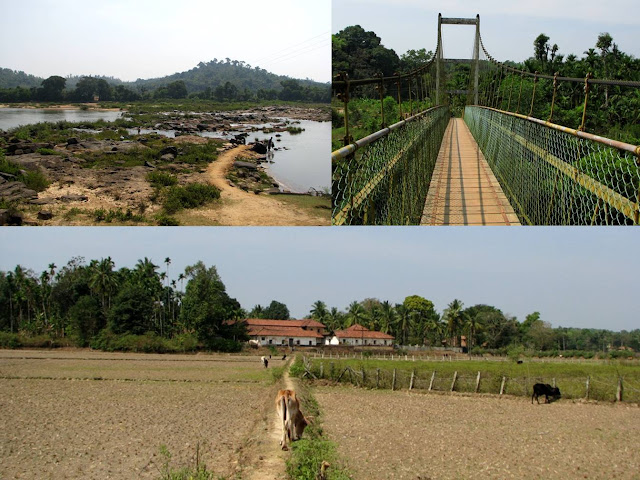 After viewing the Bheemana katte, Bheemeshwara temple and a suspension bridge we walked back to Ranji katte. On the way we stopped at a house to have water and jaggery. It is a custom in Mangalore and Malnad to offer water and some jaggery to anyone who comes home thirsty. My grandmother used to say that the jaggery would cease the thirst; the tradition now remains only in villages.


At main road we took an auto to the town, packed our bags and left to Shivamoga. Had tasty Biryani at a restaurant in Shivamoga and boarded another bus to Bangalore at around 2:30 and reached Bangalore at 9:30 Pm.

The trip was unexpected and unplanned with us just flowing with the surprises that places and people bring and hence this will remain as one more of those memorable trips.
on March 04, 2010 11 comments: