on November 26, 2009
For a traveler, the destination is never important, but what matters is the journey. What best than a trek could completely define this? So when Subbu and I discussed a plan, Kumara Parvatha was on the top of the list, it was one among the toughest trek in the state, it was interesting because we would take a different route to descend, into a different district. Within few days all was planned and 6 more joined our enthusiasm. We rented sleeping bags and 2 tents from Wildcraft, Marathhali. With our backpacks consisting of 80 chapati’s, 50 Mangalore buns, fruits, biscuits and other personal needs we assembled at Bangalore railway station at 8:30 PM on Nov 13th. The train to Mangalore arrived at 8:55PM, on time. After a few leisure talks we went to sleep, all excited about the day to come.

Early morning, at 5:45 AM, we reached Subramanya. A jeep drive to the temple (12kms for Rs250), hunt for a descent room, negotiating one for Rs225, a quick freshening up, amazingly quick visit to temple which was least crowded at dawn and a good breakfast got us ready for the trek. The distance to the Kumara Parvatha peak is 13kms, to Mantappa- 8kms, to Bhatra house – 6Kms. I called Bhatru (9448647947) and placed a lunch order for 8. 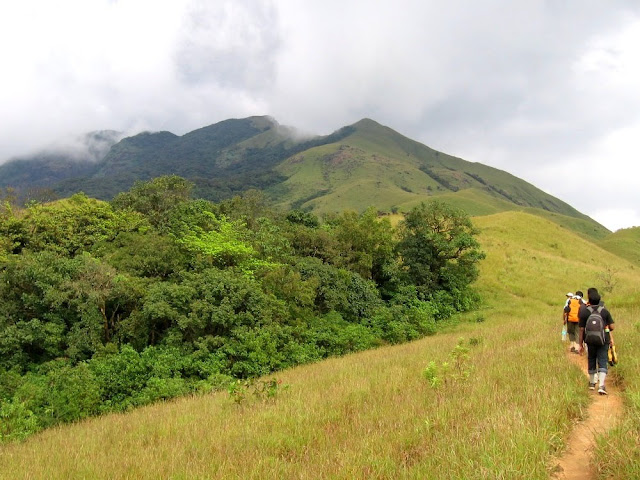 At 9 AM we started our ascent. Within few minutes we got our first warning, a man running all the way back and all he had to say is – “Leeches, beware of leeches, they are plenty.” Well, all I could think of was this was the best trek to overcome my leech phobia. Back in 8th standard, when I trekked mountain Valikunja near Karkala, I had brought back home swollen leeches and bleeding foot, which left a mental block in me, against the species. But now with few encounters, I am perfectly out of the mental block; my funda- keep walking, don’t stop near damp areas and wear shorts to spot them clearly , in spite of that if you have a bite, come-on it’s just a little blood.

In few more minutes, another group was returning with same warning. But it did not bother us since we had expected leeches anyways and had some snuff along with us to sedate them. On the way, we met several other groups. A group of men aged around early 50’s with their big tummies were spread all over the rocks, drinking alcohol and were fascinated by their recent discovery that without any luggage they could climb easily. Another group had a very jovial person who greeted everyone with a smile and invited us for a chat. We named him CM for his idea to improve the Kumara Parvatha trail with better roads if he would become the Chief minister. 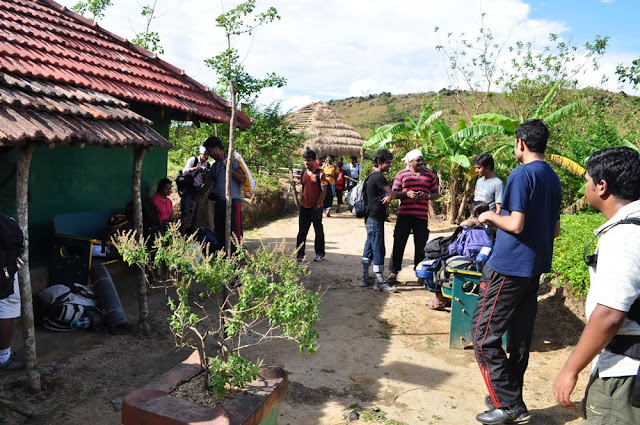 We reached Bhatra house at around 1:00 PM. We had a good refreshing meal. Narayan Bhat, his elder brother and an old lady stay in this house. They have a nice farm, several cows and many relatives in and around Mangalore. They charge Rs50 for a lunch and also arrange breakfast for the next day, if needed. Bhat travels up and down the hill to trade milk in only two hours. They sure are the best example for oasis in the dessert for we trekkers. 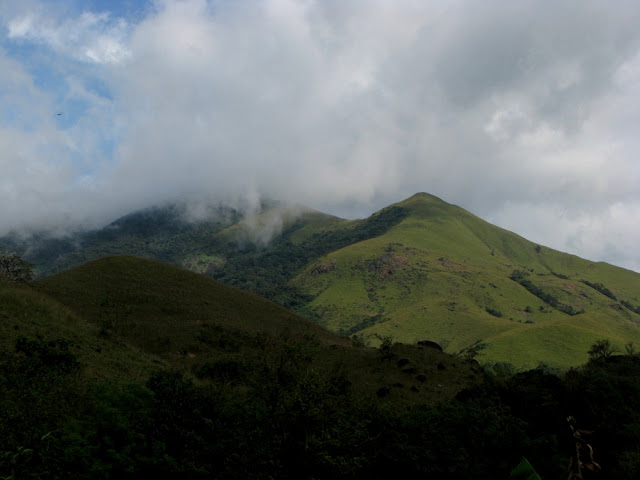 After relaxing for a while, we followed a forest guard through a short cut to the forest check post where we paid a trekking fee of Rs115 per head and noted our home address on several records. The next stretch of the Kumara Parvatha trek, till Mantapa was refreshing. For some reason, I always find the below tree-line trek very tiring and suffocating. So once we had crossed the tree-line, for me it was a nice trek with light breeze and drizzle. We reached Mantapa at around 5:00 PM 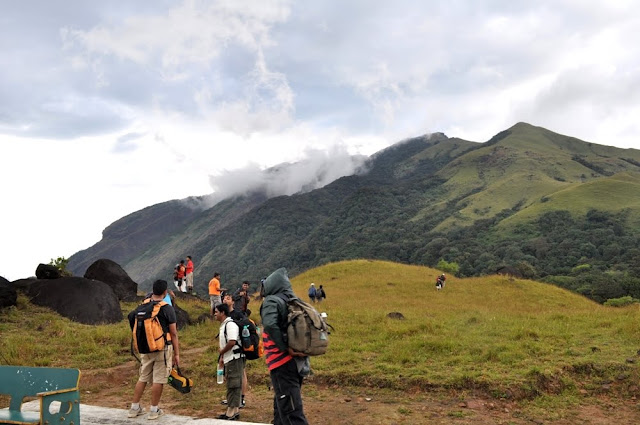 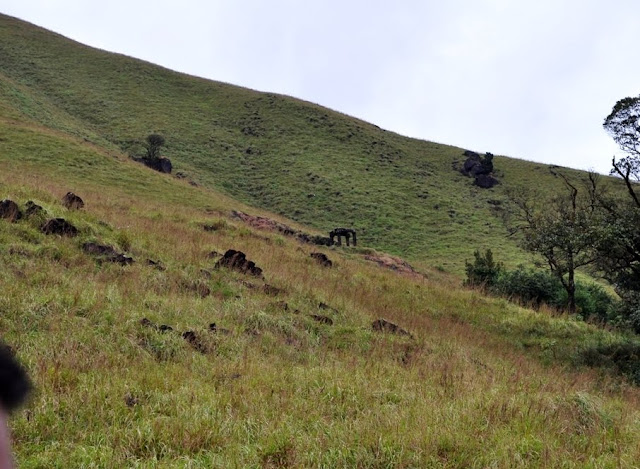 View Of The Mantapa

Forest dept has done a neat job to maintain the trails, by creating campsites, arranging trash cans and also creating water storage from the streams. But when we reached the campsite, all of them were reserved by other trekkers. So all we were left with was the Mantapa, which is at a height and has room for only one tent. So we decided to pitch one tent and the rest of us decided to sleep in the mantapa. After a quick dinner at 6:00 PM, nothing else to do in the dark, we decided to call it a day.
Along with three others, I decided to sleep at the Mantapa. We tied a big plastic sheet to one side of the Mantapa which was tied to a reasonable big piece of stone which held the plastic down to the ground; stored all the bags and covered it with the spare tent and slipped into our sleeping bags. At around 11, heavy wind and drizzle woke us up, bags dropped, tent collapsed, sleeping bags got wet, the stone tied to the plastic flew all the way to where we selpt. The next few hours till dawn had several breaks to check if the heavy wind had blown away the waterproof cover of the tent. With all that excitement, I still got some good sleep. We woke up to a beautiful dawn.