My friend K goes to Tirupati every year. This year, I joined him and his friend S. There are package tours arranged by many agents but the most trusted are – KSTDC, ITDC, APTDC. We went through ITDC. The pickup point is at their office in racecourse road. The bus left at 10:00 PM; stopped at 11:30 at Kolar for food; then at 3:00 AM at a guest house near Thirupati.

We were given two hours to freshen up. Please carry mosquito mats or coils, which these rooms need badly!

We left to Padmavathi temple at 5:00 AM. The first thing one can notice is the smell of ghee used to make ladoo’s. The goddess idol has a serene look like any idols in South Indian temples.

We stopped for breakfast and then switched bus. Only the local buses are allowed in Tirumala. Lord Balaji, the main deity resides on top of a hill, which can be reached by passing through seven mountains. Devotees prefer to walk all the way, which is a 13 km hike. The route is very scenic, but I was fast asleep as soon as the bus took off; here and there had few glances.

We reached the top at 8:00 AM. Few passengers had to offer their hair to main deity, which is a common practice here. After they arrived, we had to keep our cell phones and chappals at a shop outside the temple. 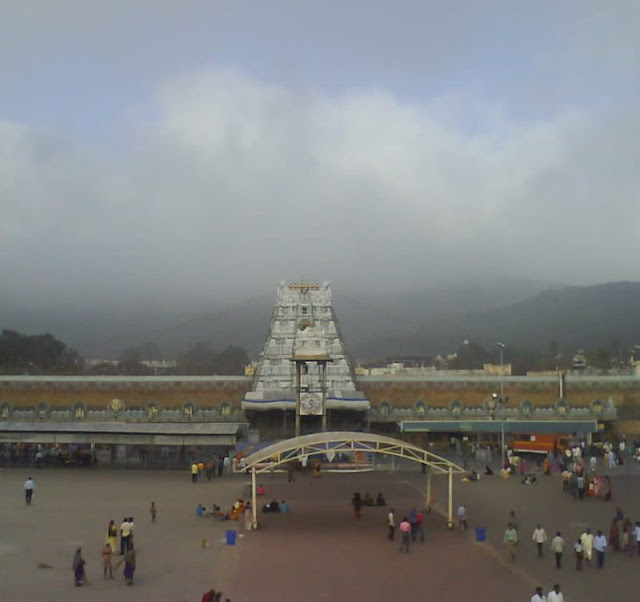 There are 3 classes in queue system. A free Darshan and Rs 50 Darshan and ours, which would join the Rs 50 queue through a shortcut.

We waited for Darshan from 9:30 to 11:15; which is much less as we were there on a week day. The temple architecture is very old and good. The entire interior shrine is covered with gold.

The queue when enters the main shrine ramps up so that we can see the face of the Balaji idol. The intention is to view the entire idol from head to feet as the queue ramps down. We were fortunate enough to go very close to the Garba Guddi.

I could totally feel the positive energy there. People chanted – “Govinda”. Women laughed out of happiness at the view of Lord; in the lamp light, Lords idol stood with a peaceful look on its face. In that one minute, I felt an unexplainable expression run through me.

After Darshan, we headed back to the bus, collected Prasad and drove back down the hill. The bust left Tirupati at 1:00 PM. We stopped for lunch at Chtioor at 2:00PM; returned back to Bangalore at 7:30 PM.

It was a nice experience and I wish to make this visit again. With some unexplainable reasons, I understand the reason for the crowd at temple, for one sight of Lord Balaji.

Thanks to my friends, this has been a week of spiritual journey.
on February 18, 2008 6 comments:

When my friend proposed a journey to Puttaparti, I was not really sure, why should I go there? As a devotee, which I was not? Or as a Traveler, which did not seem right? I agreed anyway.

G & I met at KSRTC bus stand at 7:00 AM and the bus took off at 7:30. There are few buses running daily and it would be better to make a reservation. There are Volvo buses running up and down from Bangalore.

We reached Puttaparti at 11:15 AM. During our drive into the village or is it a town? One can get a glance of its richness; a dedicated Runway and helipad, a medical science college, a planetarium, a stadium, two museums, International sports center and schools.

We walked into the Bhajan Mandir. We enquired that next Darshan of Baba would be at 4:00 PM. We then went to a museum on top of a hill. It was good in describing the Indian culture and heritage. University next to the museum was closed. These places close at 12:00 PM.

On the way, is a meditation tree. People write “Sai ram” in a piece of paper and hang it on the tree, which they believe will fulfill their desires.

We then took a walk on the main road. Unfortunately the Planetarium, sport center were all closed. 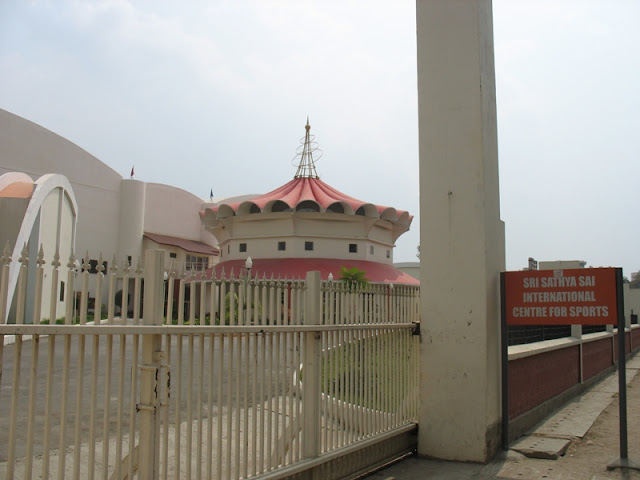 We next went to a temple on a hill top, nearby. The streets that lead to it are filled with shops selling Tibetans art crafts. The reasons for influence of Tibet are not known to me. The hill top is the best place to catch an excellent view of the entire Puttaparti. 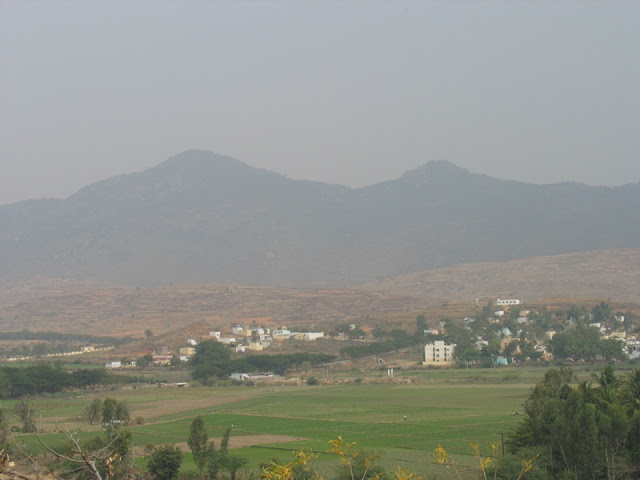 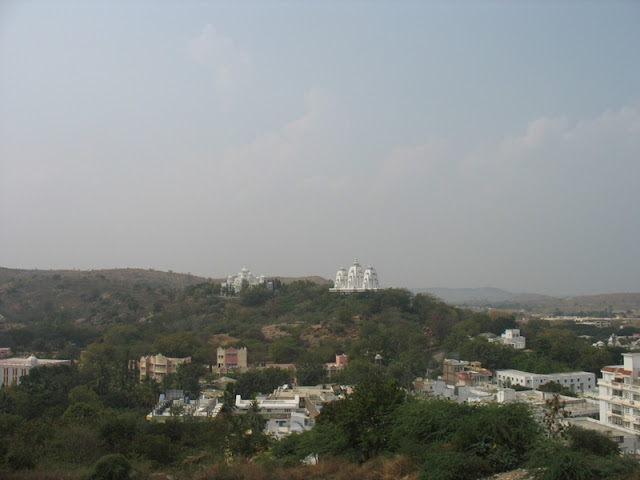 We had food in a nearby restaurant and went to another museum. There are many images and artworks of Baba with creative and sometimes funny collages. I gathered some information from them, that Baba is incarnation of Shirdi Sai Baba and the next incarnation is yet to come.

We then ran to the Bhajan Mandir and had a lot of trouble getting rid of our belongings. The cloak room inside denied to take the bags, which are not allowed into the Mandir. They only take cell phones or smaller items. We handed out the camera and cell phone and decided to leave the bags outside the Mandir for which the volunteers denied. Someone at last suggested that we could leave the bags in a cloak room in Bus stand. We ran back and stored them there.

Mandir was crowded with devotees, patiently waiting for Baba. There is a crowd of foreigners, not sure from where? They do not look British or Americans as they speak a different language. The volunteers there do not scold anyone. They fold their hands to form Namskara and say “Sai ram” and request us while we are misbehaving or not listening to them. This was a nice attitude I noticed among them.

Baba came in a car. He is around 80 now and is unable to walk, I guess. Sitting in the car, he folded his hands to greet all. The seat is automatically detached from the car and ramps down.
We returned back after having the darshan of Baba. Two people sitting behind us, in the bus, were loudly sharing their stories and interaction with Baba. One, a NRI, who gave up Wine, women and wealth to surrender himself to Baba; Other from Kerala, in his broken English tried to tell his story which when traveled from his mind to mouth, lost all the meaning. 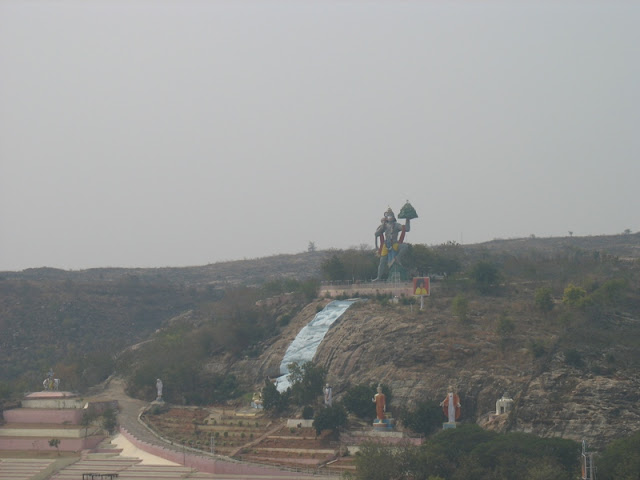 To be very frank, I do not believe in worshipping, humans as God. But I have to accept, that Baba is an enlightened soul and has a positive power to influence and inspire so many devotees. This is with no offense to any of his followers, as I think, everyone has a right to do what they believe in. I am happy to have visited the place to witness this sight and even have a chance to see Baba; I liked the good work Baba has been doing; he has built schools, colleges and Hospitals with most modern technology…all for free; which very much serves his mission – “Service to man is service to God.”

I read R K Lakshman’s “Distorted Mirror” and I was inspired by the humor with simplicity that he adds to even his stories. Of course his cartoons are a master piece. I had never seen even a photograph of RK L before, and this for some reason dint seem right to me while reading the book.

From this book I moved on to read “Between the Acts” by Virginia Woolf (VW). As always, her writing and thinking inspires me. The novel is of a day in British village, during the brink of Second World War. In broken words of people, in their conversations we get a fair idea of their thoughts about the forthcoming war and politics. The family members are getting ready for a village pageant that is to be conducted on their land. As village gathers, as guests walk in, we are introduced to the lives of family members. An aunt Lucy, who is fascinated by history, Isa, who loves and hates her husband Giles and is fascinated about being love with a farmer; Giles who has affair with Mrs. Manresa, a lady who all dislike for her overdone behavior; And there is Miss La Trobe, who is the director of the play a lady many dislike for her arrogance; several other characters that constitute in a unique way to the novel. At the brink of the Second World War they are worried if the rain or a storm would ruin their village pageant or not.

VW, mentioned in her diary, during the time of writing this novel that she is playing with words and this is what she exactly does. The words read one thing, but mean something else. The writing is very humorous in a unique way; as always she has written in the Stream of consciousness style, where she captures the flight of mind and its thoughts as is. In the novel the play villagers enact, illustrate history of England and different times till the present day and leave the audience gazing at the moral. “We act different part, but are all the same” it says and people struggle to break its meaning, by the end of pageant. After the pageant is over, people have dispersed, Isa and Giles have to confront each other, they have to talk to each other; the novel ends with a curtain raiser on reality, the play called life.

VW’s novels are not very simple, and one needs to understand the style of writing before reading them. I am no master; this is nothing close to a review yet.

I was watching News other day and I heard RK L’s name being mentioned. I raised my eyes from the newspaper to look towards the TV and saw RK L was being felicitated for life time achievement award by CNN-IBN. There he was, the Cartoonist/ writer, right in front of me, on a TV screen, shedding tears. He was unable to speak, he cried as he received the award. “I have been working towards this day since I was 5…” he said. Rest of the words just wasn’t audible; I felt they must have come out of his mind, but not as a noise. What had I expected? – A joke from the India’s best Cartoonist? A humorous speech, like his writing? May be I expected so. But the person, who brings smile on millions of hearts through his cartoons daily, was crying. At that moment all I could only remember VW’s words from Between the Act – We act different parts, but are all the same.
on February 04, 2008 3 comments: