On the morning of 22nd December, I boarded an intercity bus and headed towards Waitomo caves. I had booked a package with Intercity that included transport to and from Rotorua, tickets to the Lybrnyth black water rafting and a meal. It cost me $199. On our way to the caves, we passed by farmlands. The landscape was picturesque, like a desktop wallpaper. There were some Kiwi fruit farms along the way and it was surprising to learn that Kiwi fruit is not native to NZ. It is a Chinese gooseberry popularised by NZ. We also drove by NZ’s longest running river. 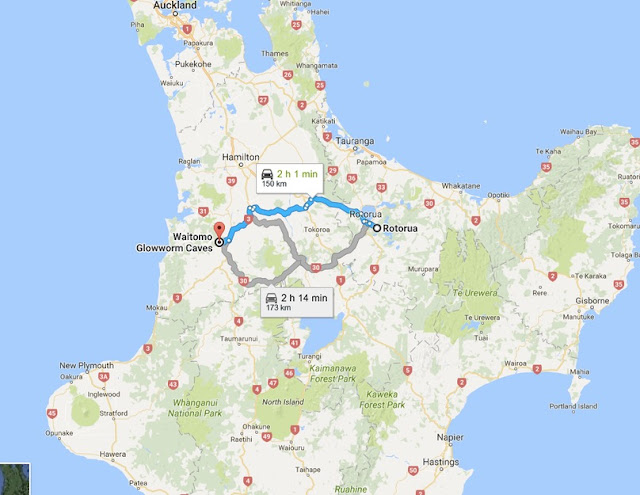 I was a little unsure of how the rafting would be as I can’t swim and I have never heard of such a thing called black water rafting. I did google up some stories and images but they just made me more nervous. Part of my fear was due to my shoulder dislocation; a problem that I have been dealing with for several years now. The last thing I wanted was to get stuck in the cave with a dislocated shoulder. I convinced myself again by reminding how this trip has been possible because I had taken certain risks and I shall continue with it and who knows, something unexpected would be awaiting.

The bus dropped me off at Legendary Black water Rafting Company, which is situated a kilometre before the main cave entrance. I got a 11:30 AM slot. 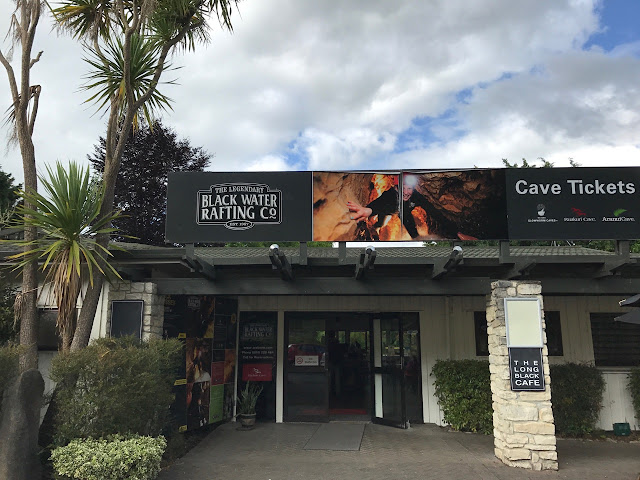 My group was a very interesting mix of travellers from across the globe. Two Germans, three Americans, an Irish lady and a family from Australia. Our guides Sebastian and Sarah (I think) briefed us about the tour. We were going to use tubes to travel through a stream inside the cave, spot the glow worms along, jump from a waterfall. Well that last part made me more nervous. I forced a smile to hide my anxiousness.

Seb mentioend to me that he really liked my name. Déjà vu! like the girl at the i-site centre at Queenstown. I think, I never paid attention to it until now. I had always loved the meaning of my name that meant "Invincible", but never did I pay attention to the sound of it. Pronounced with three syllables that sound like - "Aa" "J" "Ya". I have never been complimented thus and that made these appreciations very special.

We were given wet suits, shoes, socks and hats with lights. We changed into our costumes and headed towards the bus that took us up a small hill. Before heading to the cave, we picked a tube that properly fit our buttocks and tried a reverse jump at a stream. We had to hold on to the tube that sits firmly around our ass and then jump backwards to the river. I was scared as hell but I did it. I should have jumped a bit farther, but I was fine. But that jump was not from a great height so, I was a bit scared of what was to come. I wondered if I should tell Seb about my condition but I did not want to freak them out. Moreover, I was not sure if the activity would be that challenging. There was no heading back anyway and I decided to accept what was to come. 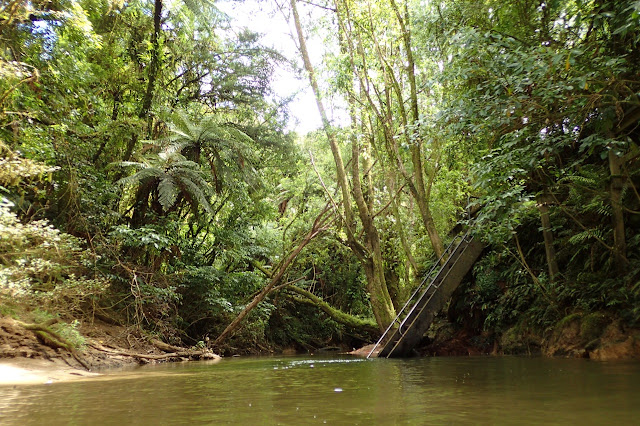 We entered the cave and it was simply amazing to view the rock formations. We walked some distance carrying the tube on our shoulder. 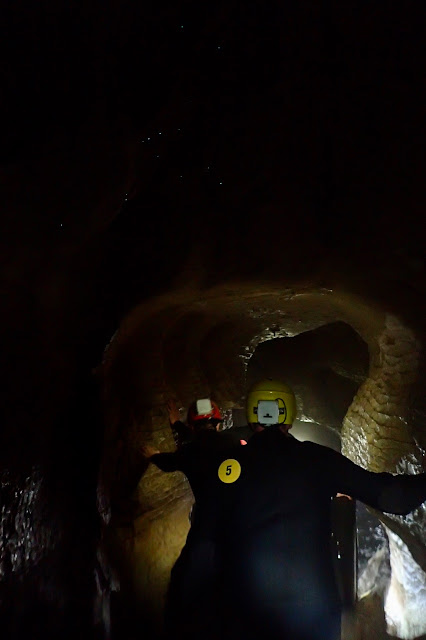 When we approached the first waterfall we had to jump. It was not that high so, we should have been okay but I did not hold on to the tube tightly so, as I fell the tube slipped. I feared drowning but it was not steep at all. I tried to get back on to the tube but it kept slipping. Sarah looking at me struggle, asked me to pull the tube into the water and jump into it. I did that and got back. 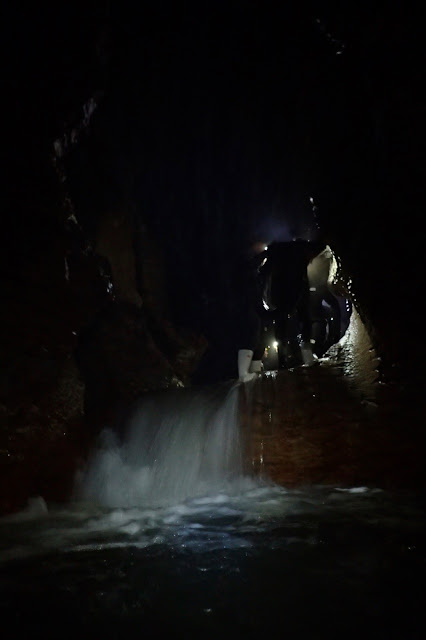 At the second waterfall, I did it perfectly okay. I jumped farther enough and I landed on my tube. That was a great feeling. We then formed a chain and sailed in darkness. That was the best moment of this tour. As we traveled, with lights switched off, we saw the cave roof high above, filled with glowworms. Seb and Sarah told us the story of glowworms. How they use fishing nets to attract preys, how the male breed for two days and die, how the female give birth to the babies and dies before they hatch. Upon hatching, the first glowworm to come out, finding no food, eats away some of its siblings and the whole process repeats. They also made us aware of the fact that the light we see, come from the buttocks of the glowworms as they burn away their food waste. Everybody laughed at this miserable story of glowworms. 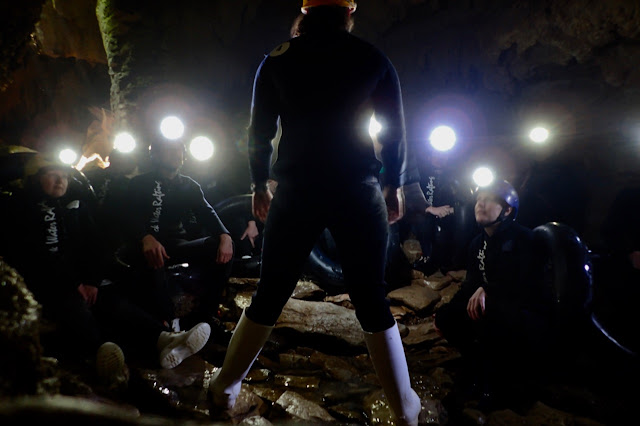 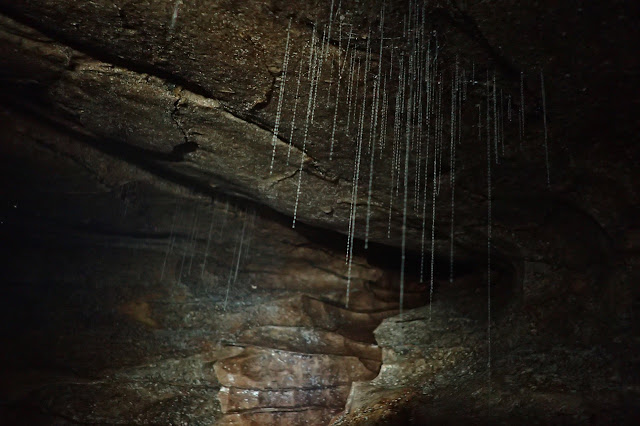 I was so happy to be here. I would have missed something incredible if I had not taken this risk. It was like sailing in the night, looking up at a sky full of stars. Just the fact that it was not a night sky but a cave and they were no stars but glowworms, made this whole experience special and memorable. 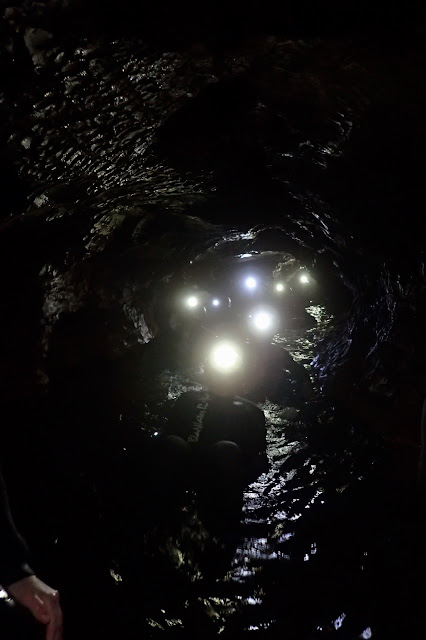 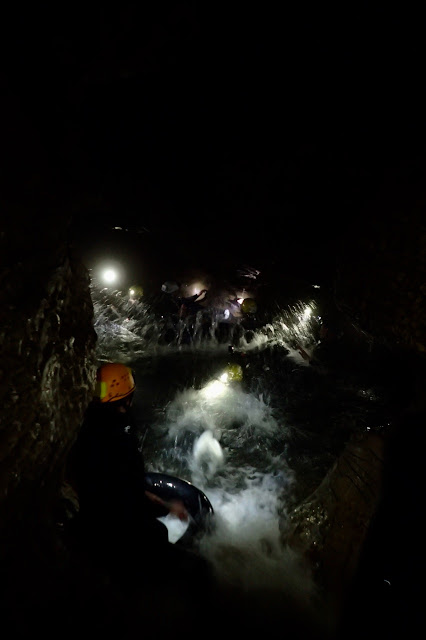 Somewhere along the way, somebody lost their tube. We tried to catch it but could not. Seb was carrying an extra tube so that was handed to the person who had lost it. The last stretch was to peddle the tube along a channel. It was hard for me as I could not peddle properly. I was too scared to move my arms beyond a point. Somehow, I struggled to move ahead. Everyone passed me and I was the last to reach the end of the cave. Seb was behind me, taking pictures. A few yards form the end, as I tried to rigorously peddle, my shoulder got dislocated. It was painful but I did not want to show it. After all it was just a question of a minute or two before I ended this ride. I asked Seb if I could walk. He said it would be better to peddle a little further. He asked if I wanted him to push me. I agreed and that was easy. I struggled to get out of the tube by pushing it in with just one arm. Seb thought that I was freezing. Sarah was looking at me wondering what was going on. But as I got off and began to walk, my dislocation corrected itself and I was normal. « My hand’s back » I said loudly. I bet no-one uderstood what I had just told. By explaining, I simply did not want to create panic for everyone there. For me, this was a common but it could have been an emergency situation for them. 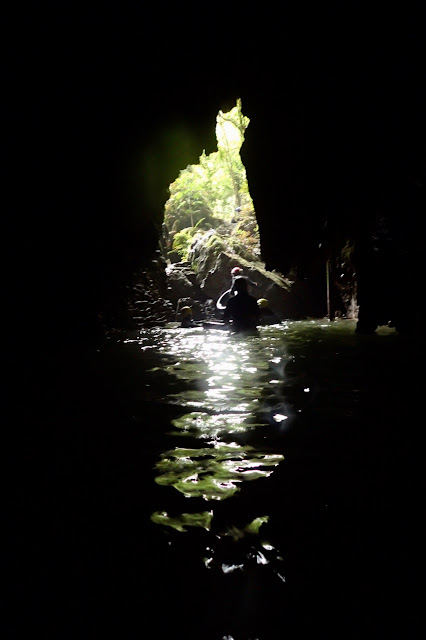 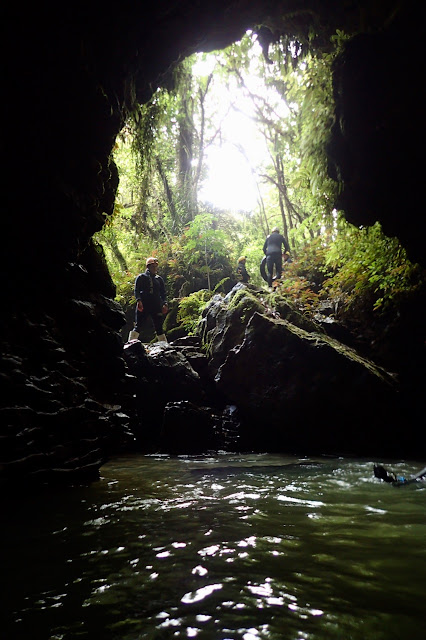 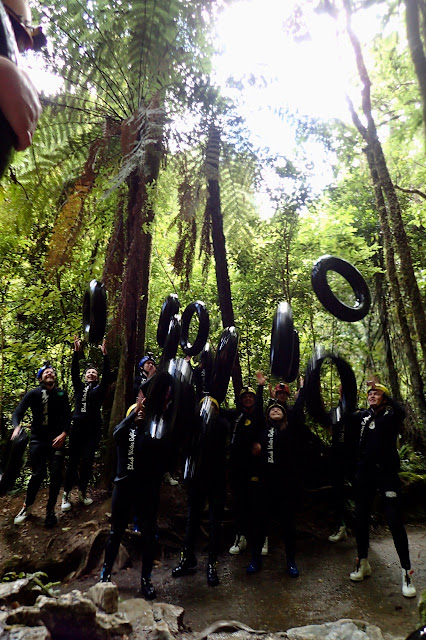 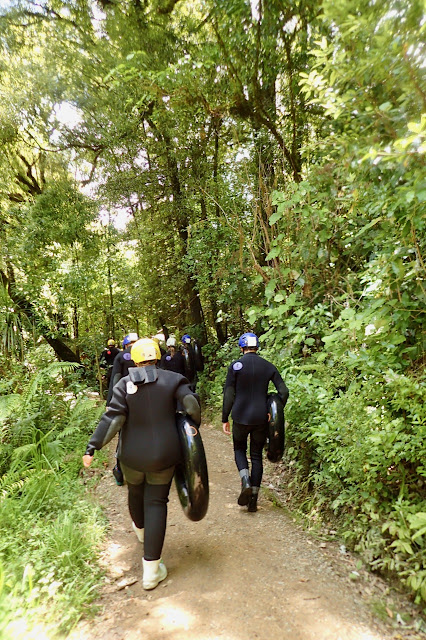 At the end of the activity, a great sense of achievement dawned on me. I was happy that I went there and did what I did. I could have never experienced this by walking in the caves like many others.

At the dining table, where we were served free soup and bagel, we sat and watched the pictures from the tour. Seb had captured my first fall in the stream and he joked how he loves that expression on my face that he jokingly said meant- "Why am I hear?" I thanked him for lovely pictures.

An American girl, an Irish lady and I were heading back to Waitomo caves to catch our 4pm intercity bus. We got a free ride till there. At a restaurant there we had our free meal. Well, not free but part of the deal kind of meal. I negotiated a replacement of fish with some samosas.

At the lunch table, the three of us discussed various interesting topics - Colonisation, Politics, Food in India, Ireland, America, Trump, British influence on India, movies, literature etc. The American girl was very funny and she would have these really interesting way of narrating things that made us all laugh. She told how it would be cool to have glowing butts like the glowworms and then we could walk around naked and if somebody’s butt glows we would know what they were doing. She also told how she would pack light and unlike other girls wore the same t-shirt multiple times. It did not matter as she would keep meeting different people everyday but then if someone noticed, she would say that she had many T-shirts of same colour.

It may sound weird that I met these people and spoke to them for hours but I never bothered to ask them their names. There was never a need to know the names. We shared an interesting moment and that is all that seemed important.

In the bus, I met this Japanese guy who spoke little or absolutely no English. He would speak to me in sign languages. Like, if he had to say something, instead of saying it, he would enact it. It seemed very funny in the beginning but eventually, I got a hang of it. At Rotorua, I decided to take a walk in the town and I met the Japanese guy again and again, he started to enact what he was doing there. It was an interesting mode of communication between us. I imagined how difficult it would be to travel , when no one understood what he was saying and at times the drivers were rude to him. That made me sad because, I would be more considerate and kind to people who cannot speak my language. Even though I could speak English, I tried to answer him using my gestures and expressions. After a while, when it got strenuous, I bid farewell and continued my walk.

There was a night market happening in the town. There was only food stalls there. As I was not in the mood to try any outside food, I returned back to the hostel to cook my dinner. 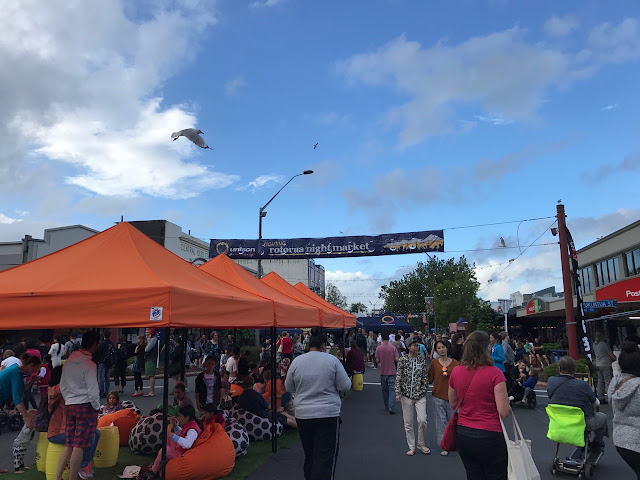 I met a Brazilian guy who had just arrived in NZ and we had a good chat. He was spending an year in NZ and two months in Rotorua. He was hoping to find a job soon to fund his expenses.

After dinner, I sat in the lobby, writing my journal. Spoke to a friendly German traveler who was visiting his sister in Auckland and then extending his leave to travel around the country. Bianca joined us too. The three of us spoke for hours about our travels in NZ, German Dialects, Caste system in India and so on. He had hurt his arm and back during a fall on a MTB track, earlier that day. He said that the tracks were really good around Rotorua and he thoroughly enjoyed it except for the fall in the end that he had misjudged. Again, I spoke to him until 1 AM but never bothered to ask his name.

This day had been one of the best. May it be the rafting experience that helped me overcome yet another fear, watching thousands of glowworms that resemble stars or meeting and conversing with interesting people, all of them had been very impressive, educative and enjoyable.