A morning walk is inevitable by me during an overnight stay in a beautiful place. In small towns, I enjoy the activity that people indulge in during dawn but in a remote island such as this it was birds chirping and trees swaying to the early morning wind that created a pleasurable walk. I took a short walk (Raroa Track) and returned to the hostel. At the breakfast table, I met a French guy who was starting the Rakiura trek that morning. 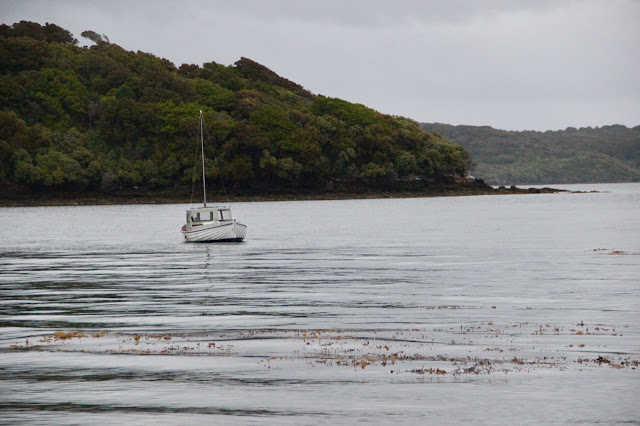 After having my breakfast, I checked at the front desk about different trails around the island. Rakiura track is one of the popular great walks but would take you at least two to three days to complete. As 70% of this island isn’t inhabited, I imagine that it would be an interesting walk. However, there are a couple of short treks along this track that could be done in a matter of few hours. The lady at the reception suggested that I hire a scooter at a shop close to the wharf. I thanked the old couple running the hostel and walked to the store that rents out scooters. An old lady there got my paper work done and I paid $70 for four hours. As a protocol she required me to ride a few distance as she observed. She also warned me about riding on the left side of the road. To that I told her that so was it in India.

It was little uneasy for a while to ride such a light scooter but I got a hang of it over time. I first rode to the beginning of the Rakiura trail near lee bay, which is about 5kms from Oban (The town by the wharf). I met the French traveller again here. I also met two Dutch boys from our bus who where doing the entire trek as well. At Lee bay is the other end of the chain that I had seen at Bluff. 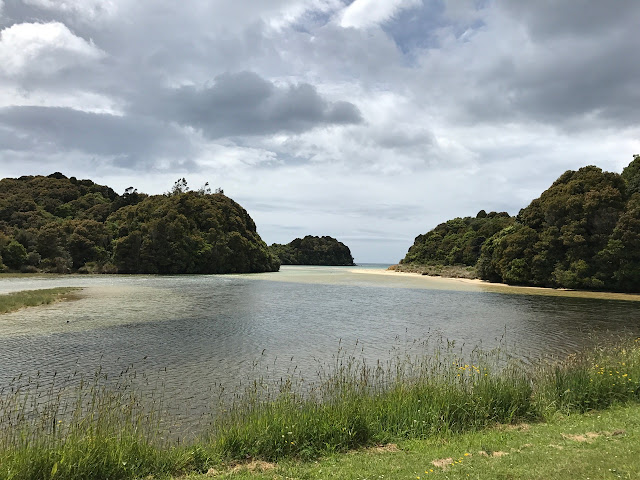 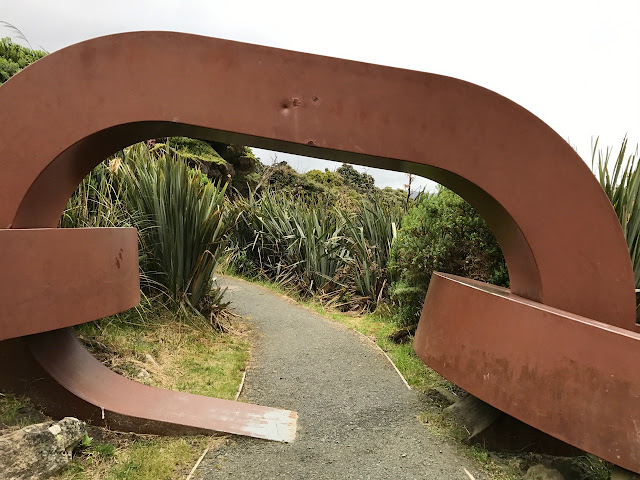 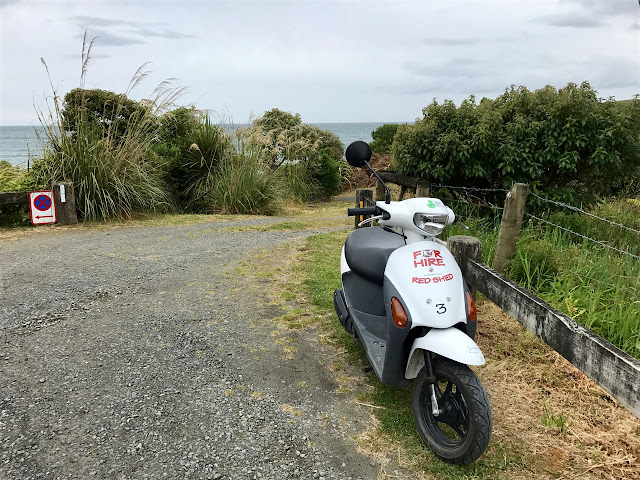 I decided to take the 3km walk to the Māori beach. From Oban it would have taken me 5-6 hours of return. I walked a little fast as I had limited time. The views were spectacular. It's a different terrain than the mountainous South island. I imagined that it would have been a great experience to do the entire trek and stay in the forests by the beach. 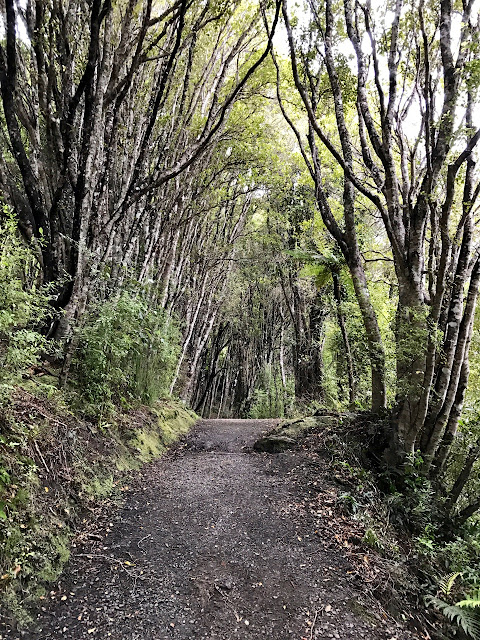 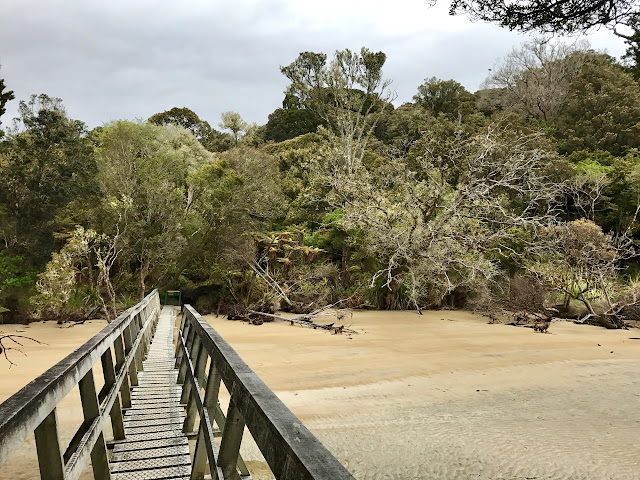 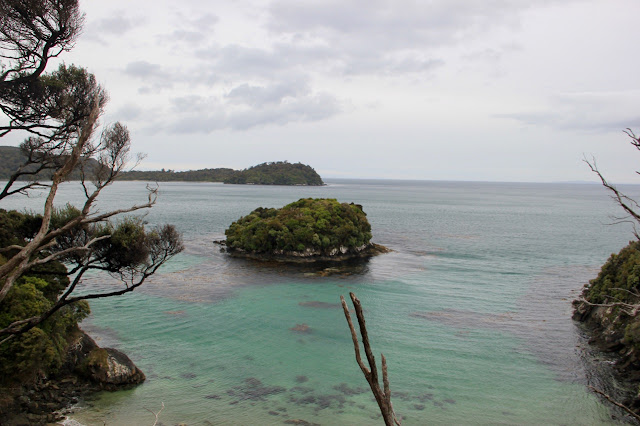 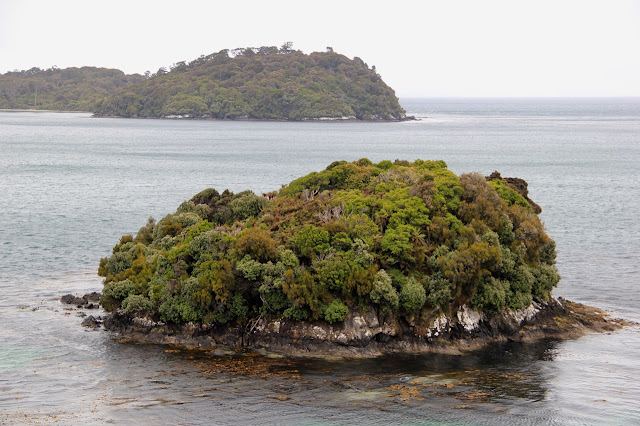 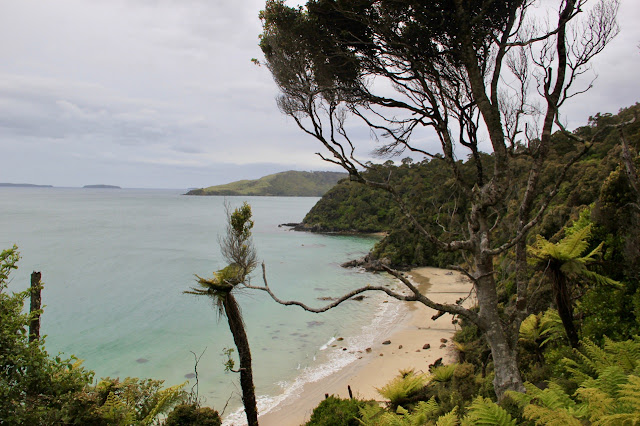 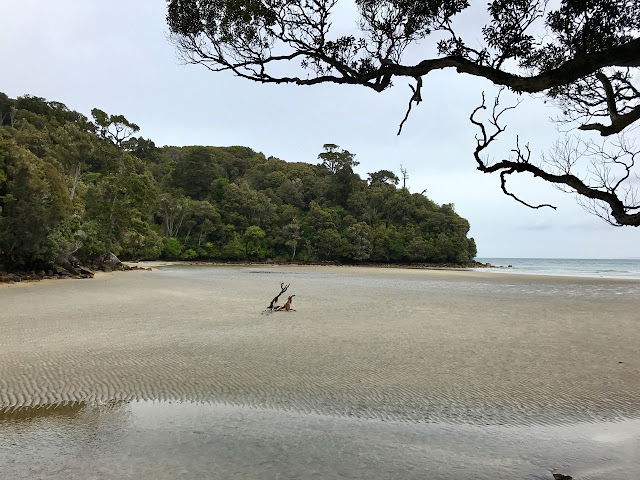 Having lived most of my life by the beach, beaches do not fascinate me a lot but at Māori beach, I was all alone and that made the difference. It is truly an unmatchable experience to be alone in a beach. Let me correct myself, I was the only human there. Several beautiful shells had reached the shores and I picked a few to carry back. 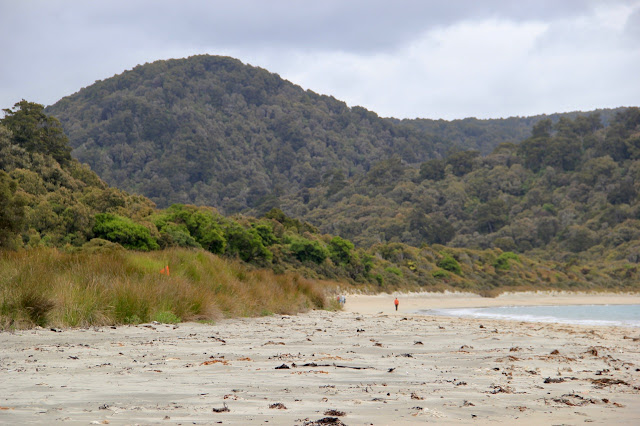 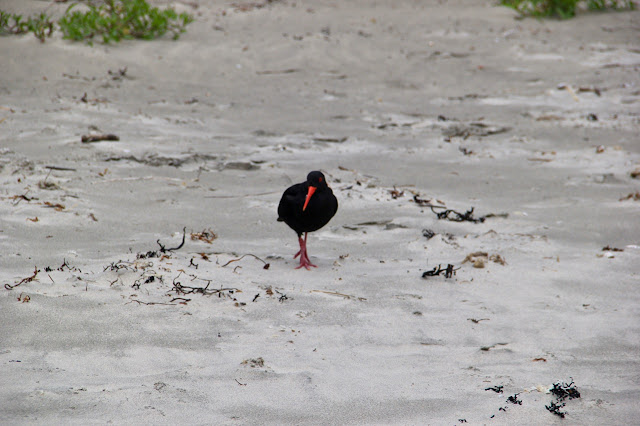 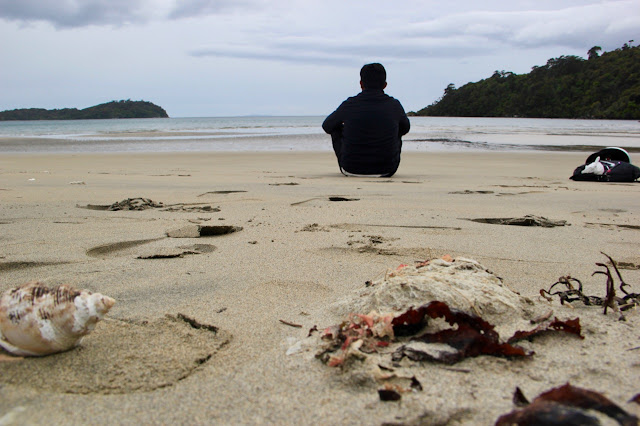 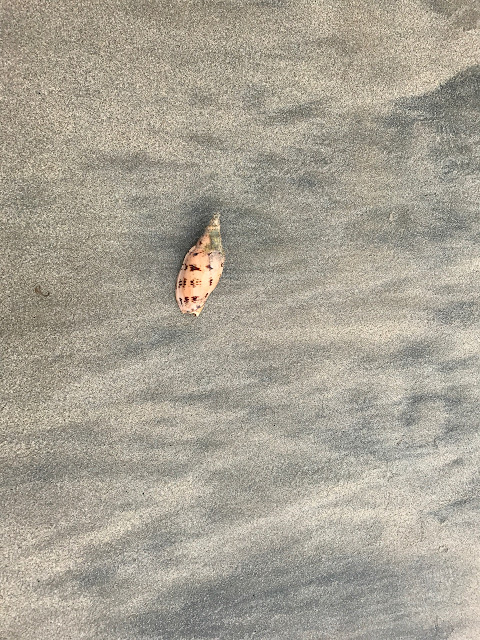 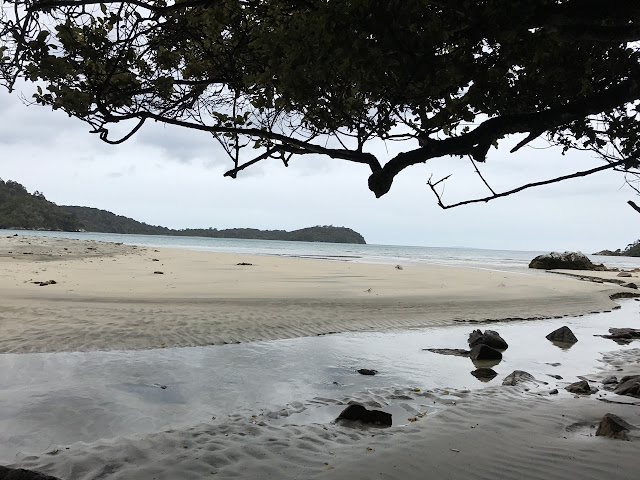 After spending some peaceful time at the beach, I decided to walk back. I speeded on my way back so that I could fit in another small trek before I returned the scooter. On my way back, I took some last glimpse of the beautiful beach. 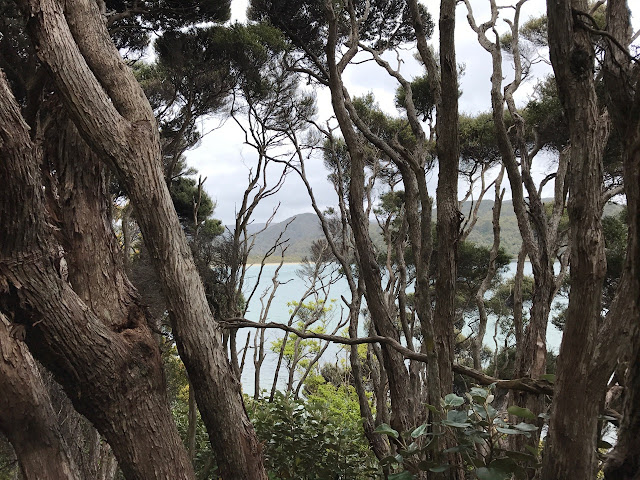 At one spot, I tried to take the route that is meant to be taken during low tide. Though, there was no high tide, at some point, I had to jump into the water and wet my shoes completely. I really did not mind that as heading back to the other route would have been a bad idea anyway. It was adventurous as at times I feared slipping on wet rocks. 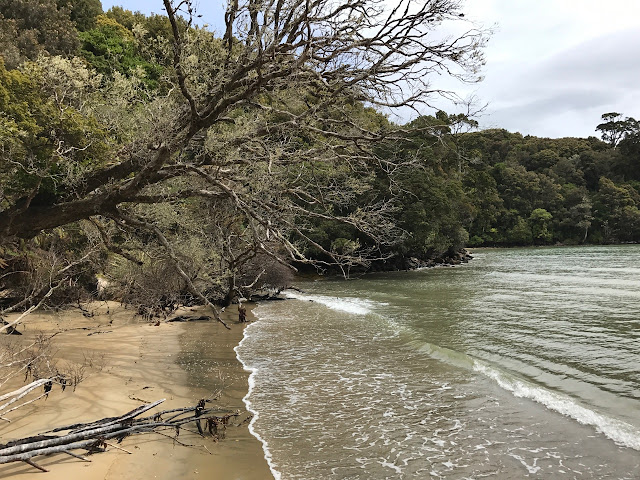 Back at Oban, I rode to the beginning of Acker’s track and walked to the lighthouse. My hometown has a beautiful lighthouse and perhaps thus, I had great expectations from this lighthouse. But what I found was a rather unimpressive structure. Everyone from the bus who had visited the lighthouse had similar opinion about it. On my way back, I met James who was taking a leisure walk along the road and reading his book at one of the view points. After speaking to him for a while, I rode back to the shop and returned the scooter. 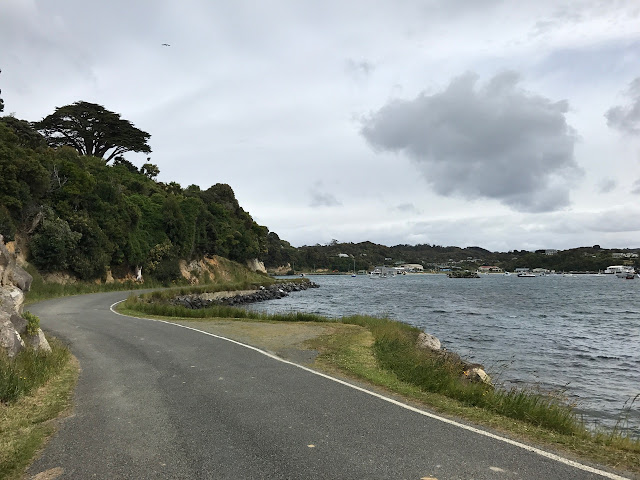 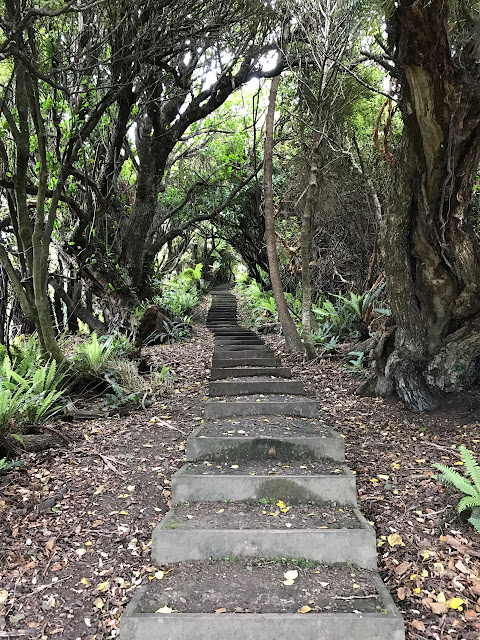 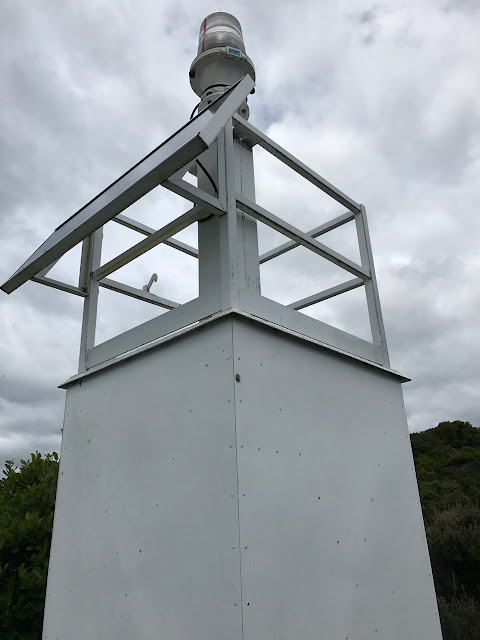 Back at the hostel, I cooked my lunch, packed my bags and checked out. At around 2PM we all left to the wharf and took the ferry back. 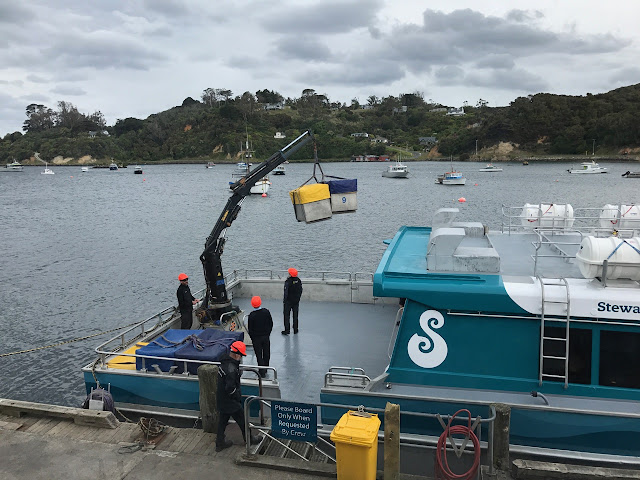 The bus ride back was uneventful and mostly quiet as all of us were tired. Our driver as usual had stories to tell. At Winton, she narrated to us a story about a woman called Minnie Dean who adopted children for money and then killed some of them. She was the first woman in the country to be executed.

As always, I was happy to be back by the mountains. The Remarkables had received some snowfall while I was gone. 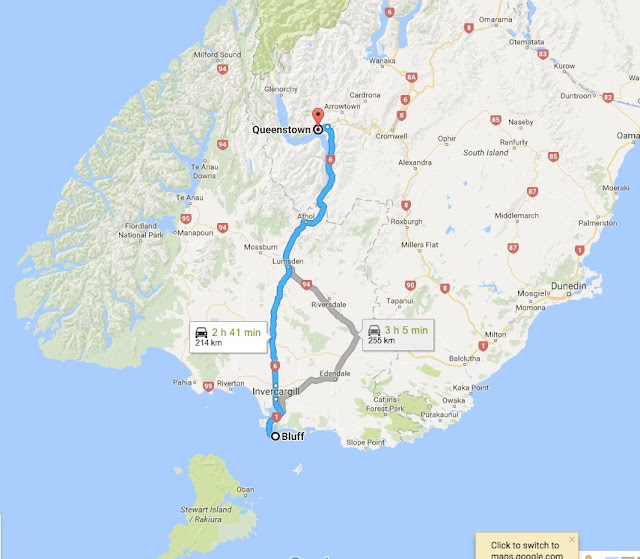 I bid farewell to some of the friends from bus and checked in at YHA. Stray had booked beds at Base for the others. I got the same room and was surprised to see the three German boys still sharing the same dorm. They have been in Queenstown all that while. When I opened my bag, a horrible smell filled the room. It took me a while to realise that it was from the shells I was carrying from the beach. I took them to the washroom and noticed some stinky weeds inside them.  I washed them and put them back in my bag.

I was not in the mood to cook so, I had some delicious enchiladas at a Mexican restaurant. 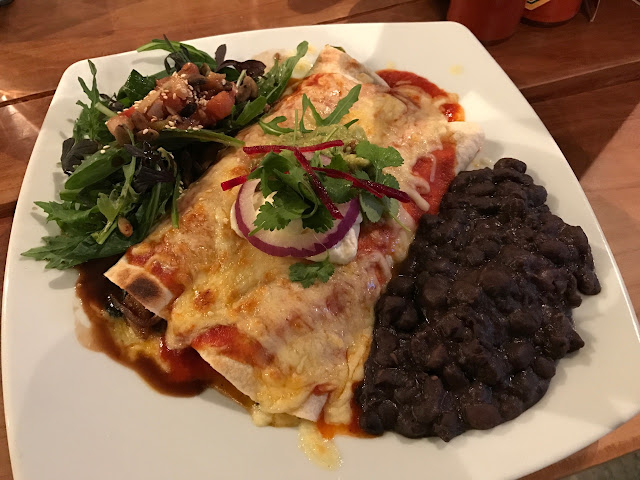 When I returned to the hostel, the others had sprayed some room fresher to supersede the odour from the weed. I felt so embarrassed. Thankfully, I was leaving this place early next morning.