A Most Awaited Journey

My intercity bus to Mt Cook was scheduled to leave Queenstown at 7:30 am. At the bus stop, I met Mandy, the American girl I had met at the Routeburn trek. It had been just one week since that trek but to both of us it felt like we were meeting after a long time. That is because so much had happened. While I had been to the Deep South, she had trekked in Te Anau area.

The bus driver was very friendly and he had stories to tell along the way. Some of them, I had already heard on my way to Queenstown.

We stopped at a small shop near Cromwell that is attached to a farm. They sell fresh fruits and fruit products. Cherry, apricots, pears and apples dominated the stall. I bought some sun dried and caramelised fruits. 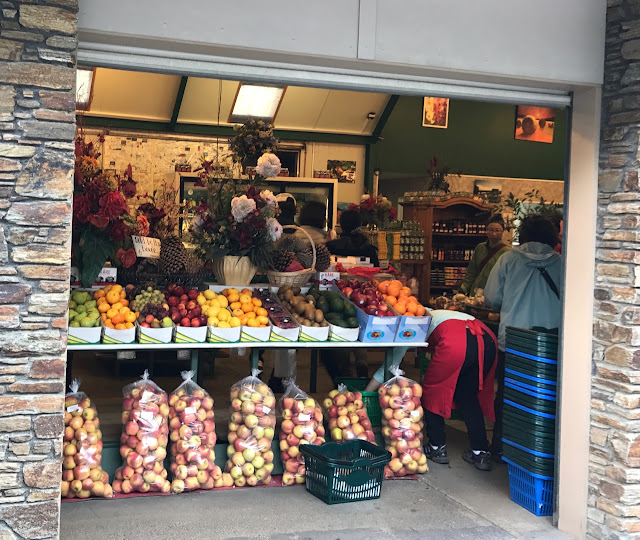 We also stopped to spot some lupins along the way. It is always a delight to view them in full bloom. 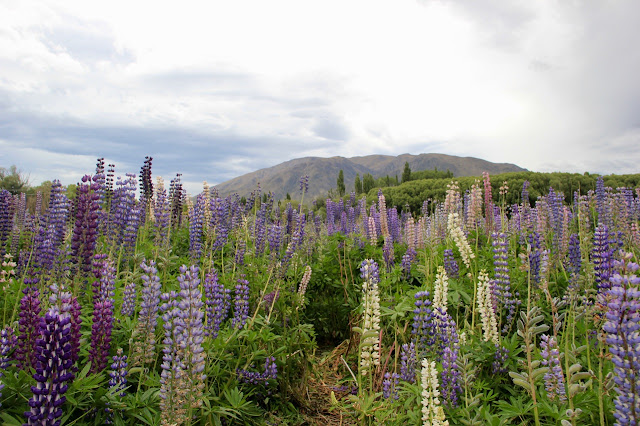 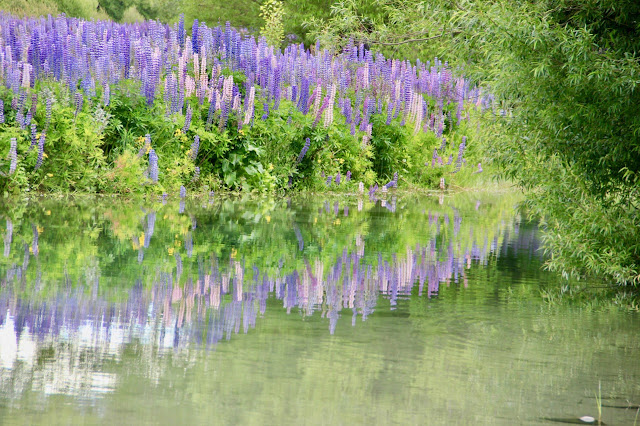 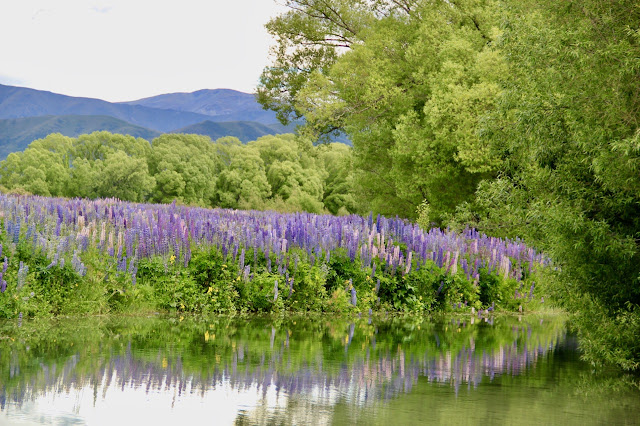 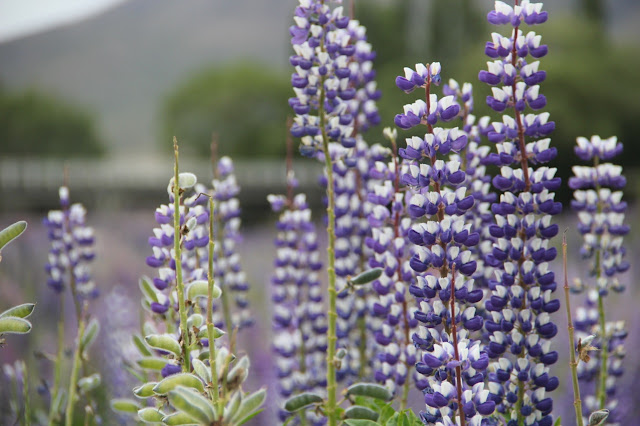 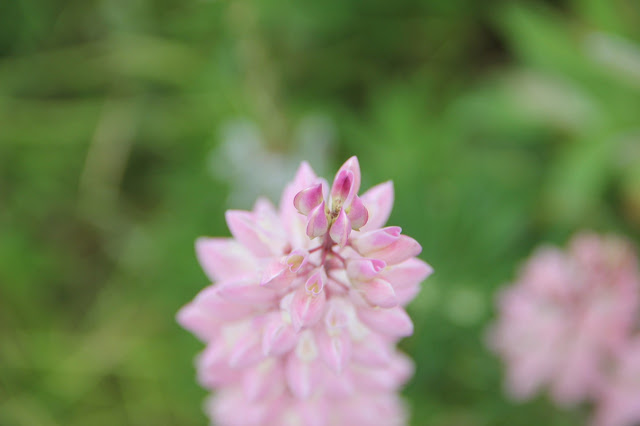 Our second driver after a change midway was very informative and we heard a lot of stories related to Mt Cook and the surrounding area. He told us about Harry Wigley who pioneered the use of ski planes. He landed planes on snow.  We heard about the first long car drive from Timaru to the Hermitage hotel in Mt Cook that took  22hours in 1906. And there was also the story of Lynne Cox who became the first woman to swim the Cook strait and other Great Lakes of NZ. We stopped at lake Pukaki for some views. Unfortunately Mt Cook (The tallest Mountain of NZ) was hiding behind the clouds. 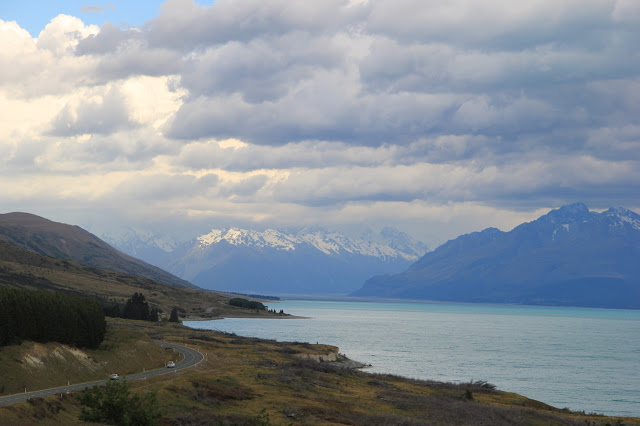 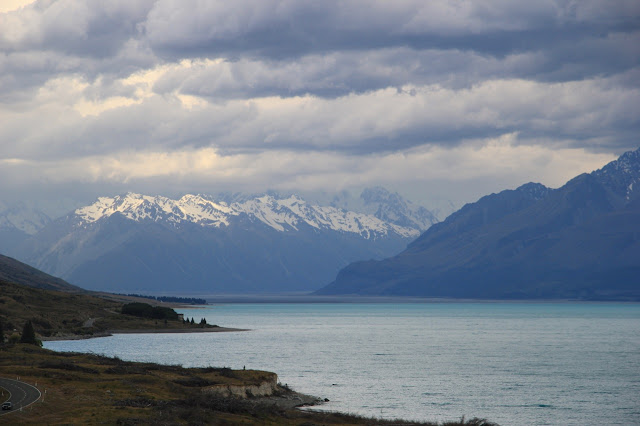 At Mt Cook village, I got off at YHA and took a short cut to my motel. There are limited stay options in the village so an advance booking would be a smart idea. Hermitage hotel is a landmark and stands tall with best views of the mountain. I stayed at Mt Cook Motels and lodges. Their dorms were full and I learnt later that the Stray bus was arriving there and the beds were all pre-booked for them. 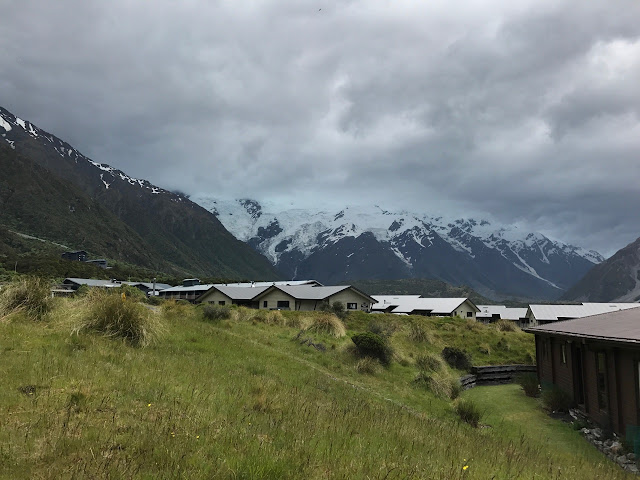 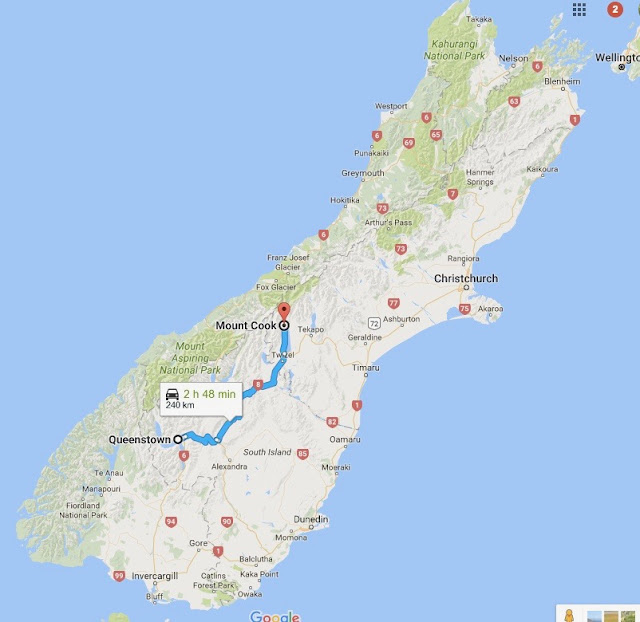 As my room was not ready, I dropped my bags in the store room and headed to the common kitchen to cook some lunch. I made some pasta for myself.

At 2 PM my room was allotted, I unpacked my bag and found the shells were still stinking and now they had worms growing due to the water that had not dried properly. I washed them again and allowed them to dry. It smelled sea weed everywhere in the room.

I got ready to trek in the cold and rain before stepping out on my first of the three treks in Mt Cook - Sealy tarns (6kms round trip with elevation of 547mts). The weather prediction showed rainfall late in the afternoon. With my jacket on, I walked up to the Hermitage hotel from where there are sign boards that lead you to different trails. Trek to Sealy tarns was amazing due to spectacular views the track bestowed. I shall let these pictures speak for themselves. 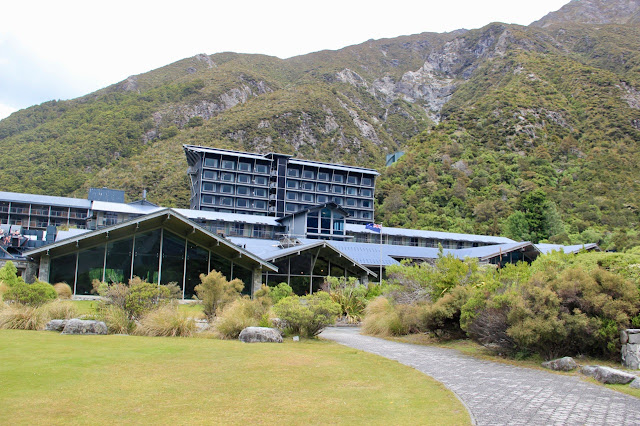 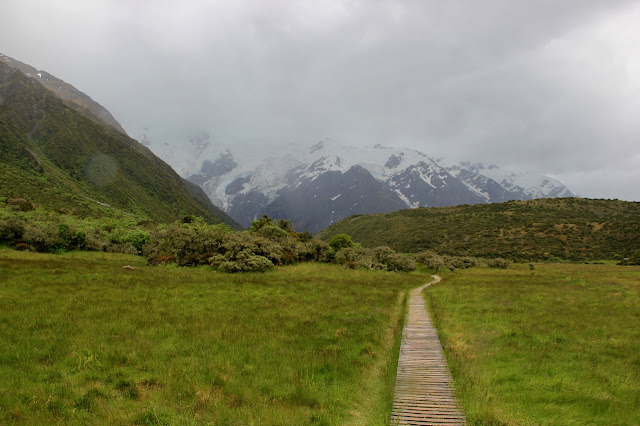 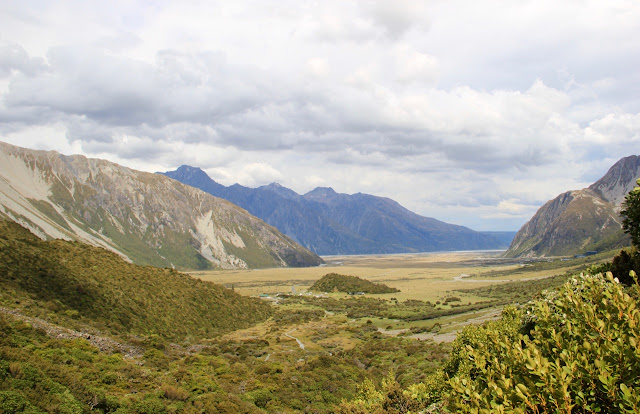 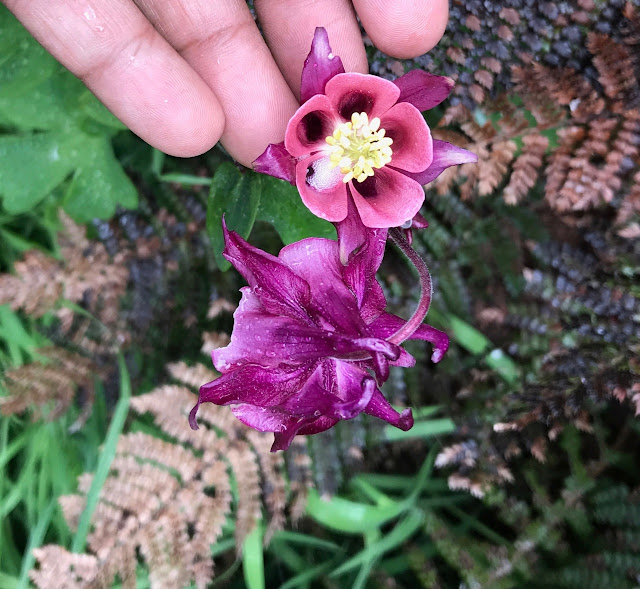 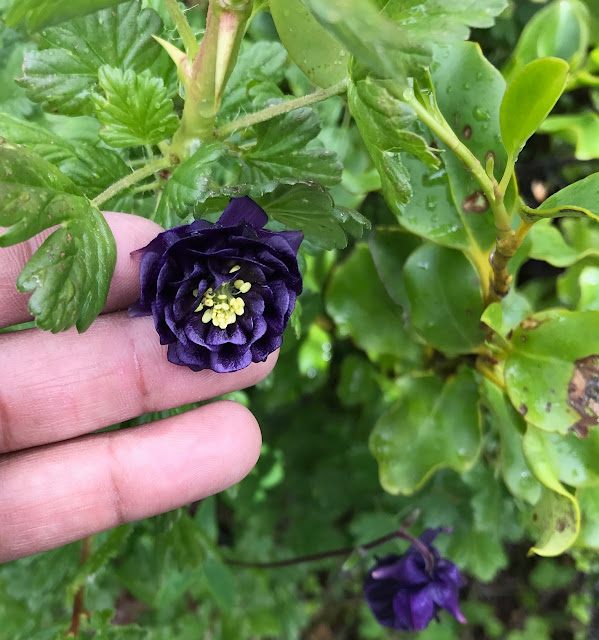 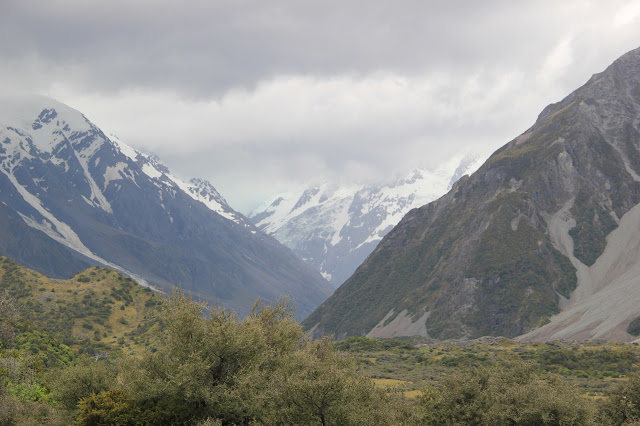 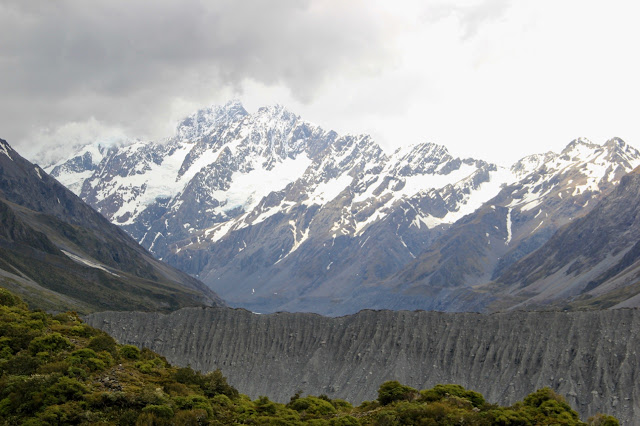 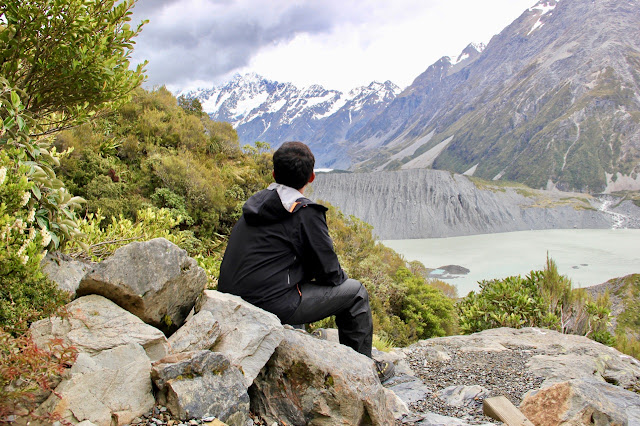 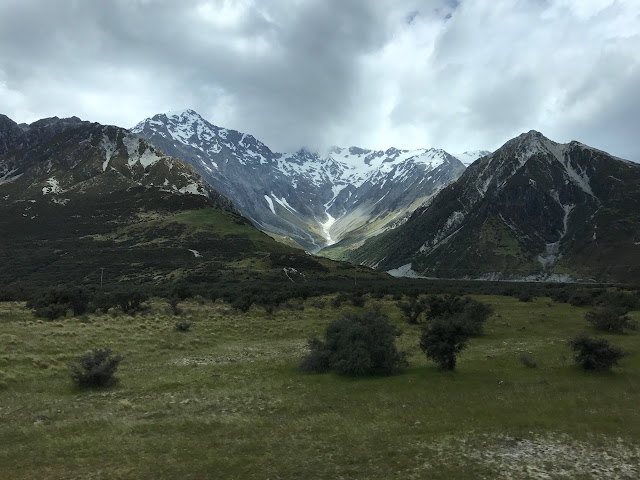 I was almost alone on this trail. The trek passed through some avalanche paths and the Mueller’s glacier looked almost at the verge of a break. Even though the thought of an avalanche could be scary, somewhere within me, a wish to witness a small shake or a slip of snow seemed exciting.

I met two other returning trekkers on my way. One of them seemed happy to see me. She said that she was all alone at the top and had wanted to trek upto Mueller’s camp but since she was alone she did not do it. I kind of understood her thought as sometimes its nice to have some like minded company while experiencing an exhilarating moment.

The wind blew so heavily that occasionally I felt that its power would throw me off the mountain. It truly was scary at times and being alone there made it worse. At the end of Sealy tarns trail is a small lake and a view point that over looks Mt Cook, Mueller’s Glacier and the Hooker valley. It is interesting to note that as you trek higher and higher the perspective changes and you get to view more than what you see at the lower heights. At the base, I saw only the mountains. As I gained some height, I could see a lake beyond those mountains and then a valley beyond that lake. Trekking truly, is a remarkable experience. At times as the clouds cleared I got a glimpse of Mt Cook. The experience was truly magical. 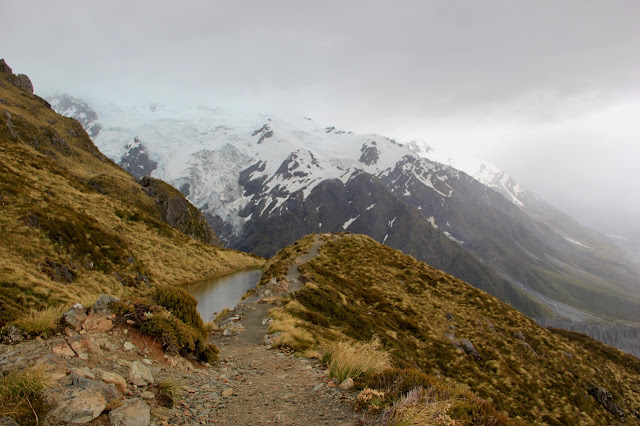 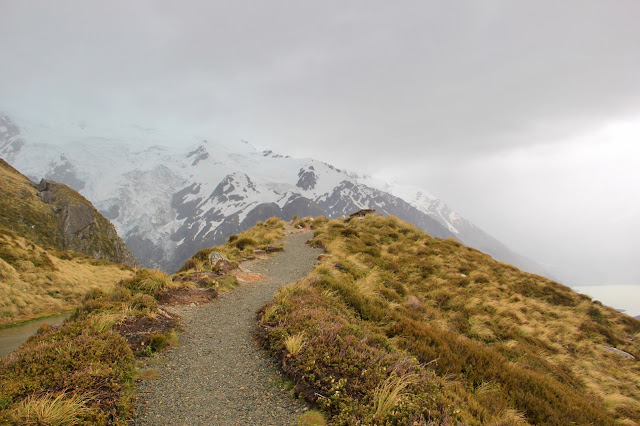 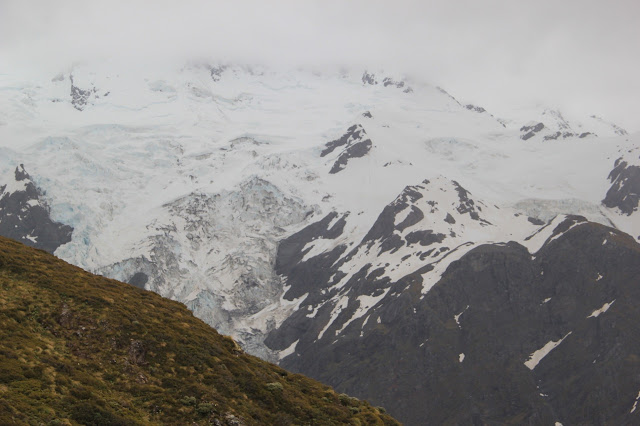 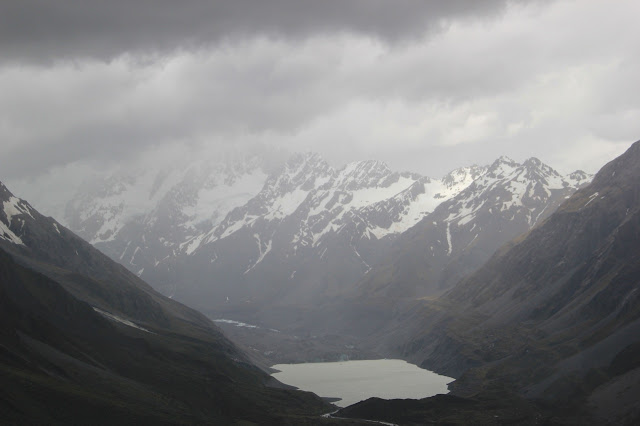 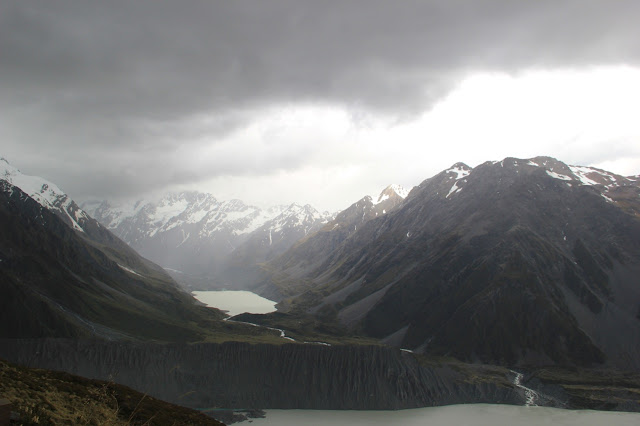 While I was up there I met Jack from Australia. He is doing a Pediatrist course in Sydney and also working at a place that supports disabled kids. He was planning a trek in Nepal during Jan 2017.

While returning, it began to rain heavily. Soaked in rain, I walked directly back to the hotel and took a much needed hot shower. I decided to try the café in the hotel for dinner. The guy who took my order checked with the chef if he could make something vegetarian for me and I got grilled vegetable wrap for myself. It was delicious. I saw some of the stray bus mates there but none I had been friends with were there so I happily chose my lonely corner table. I had great views of the mountains to accompany me and end my interesting day over some good food and a glass of apple juice. 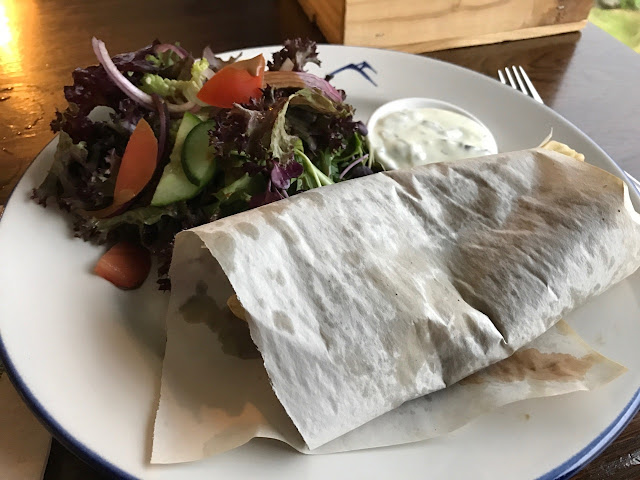 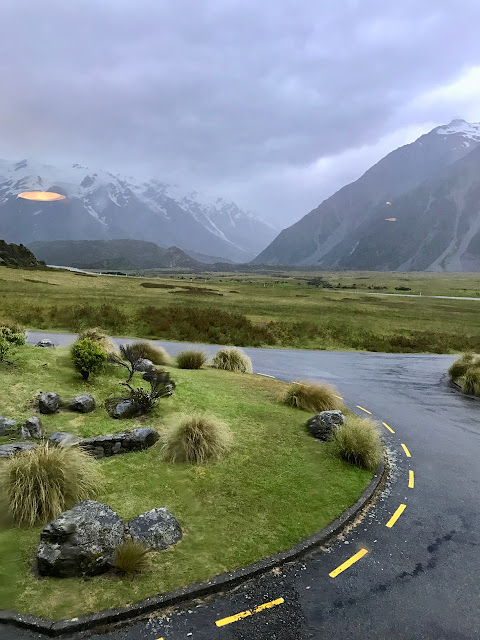