Next morning, after a quick breakfast, we left Gangtok. Our driver for the day was O.Bhutia, a very talkative and interesting character. He would scold almost everyone. “kuch teek nahi yaan saab” (Nothing is okay here, sir) he would say and scold the Government officials, police, army and people. He would ask– Kya hoga yis desh ka? (What will happen to this country?) His most favorite target was BRO, Border Road Organizations. “Ek number ka chor hai” (Thief number one, they are) he would say before mentioning anything about BRO. He told how they have been constructing the worst roads that get damaged in no time. He told that the organization is a big fraud. The road construction to Nathula, he said has been going on for years. His description of the issue was rather humorous. He would say that Chinese people, with their binoculars, look at our roads and laugh, while their roads are extremely well maintained. He is not totally wrong either; the roads are in pathetic condition near the border. To make all this more funny, BRO has boards showing their commitments at almost every bend in the mountains. Banners like “East or West BRO is the best”….”BRO never Looks backs”…”BRO serves nation” now gave a much ironic and sarcastic thoughts.

Several jeeps followed one another as the road swiveled around the mountains. We passed through Black cat division army camps and bought some tax free domestic goods. At Shertong, is Indo-China trading center. Chinese traders are allowed to travel till here. Similarly Indian traders are allowed to drive about 6-8kms from the border, into China. This route is also the old Silk route that once was the main silk trading route from China to India. 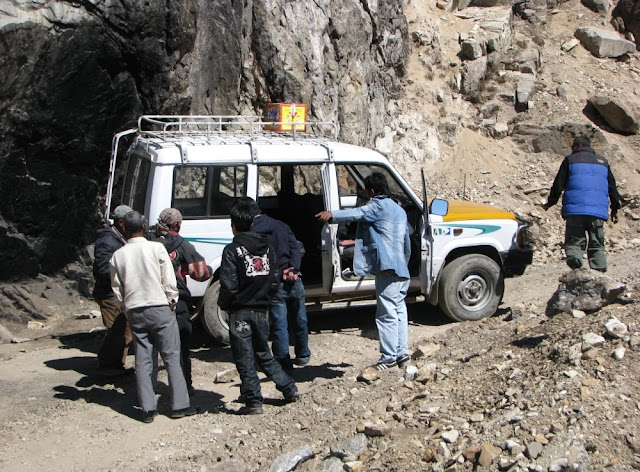 On our way, a jeep ahead of us stopped working and we had to give the passengers a drive till the border. Four men from Vishakaptnam joined us. They had trekked and traveled for 18 days in Nagaland, Mizoram, Assam, Shilong and now Sikkim. They had had a good travel around northeast and told me that Shilong is a must see kind of place. They had worked out a good deal with the travel agent in Sikkim. 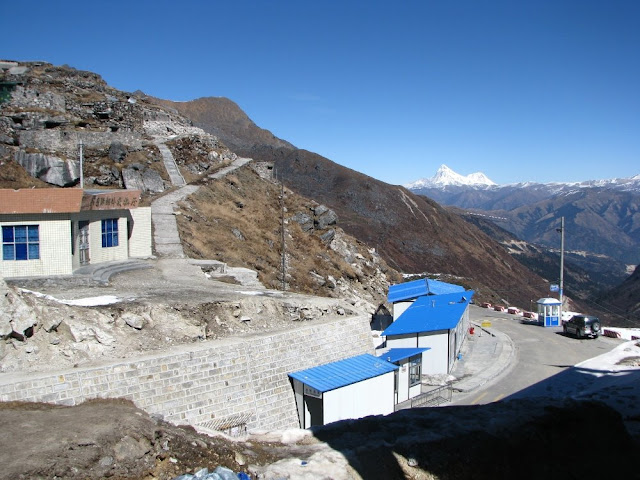 Chinese Side And a Mountain of Bhutan in backdrop

We saw some snow at Nathula pass, which is at 14400ft above sea level, almost the same height as of Pikes Peak, Colorado, which I have hiked. 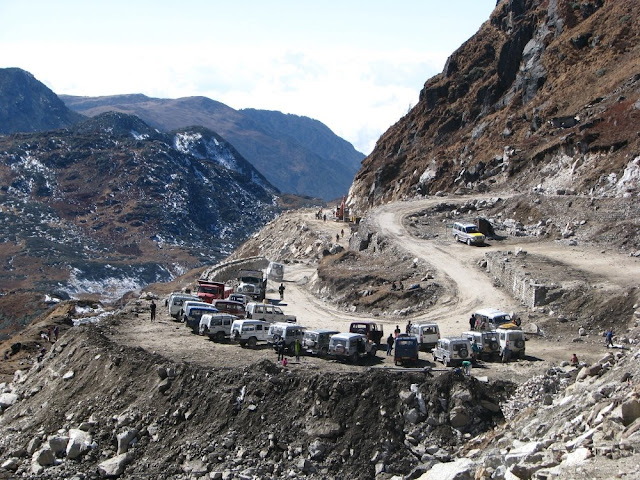 At the border, many Indians were eager to shake hands with the Chinese soldier and click a picture with him. We too got one clicked as though it was a ritual to be followed. :-) The Chinese concrete roads looked fabulous as compared to our roads. On both sides, new conference rooms are being built. Surprisingly, the other side of the border had only three construction workers and few soldiers at the check post. For the Chinese, this was no tourist point. Why it was for us? I thought. Perhaps we take pride in being in other countries or near it, reason for which may be many. 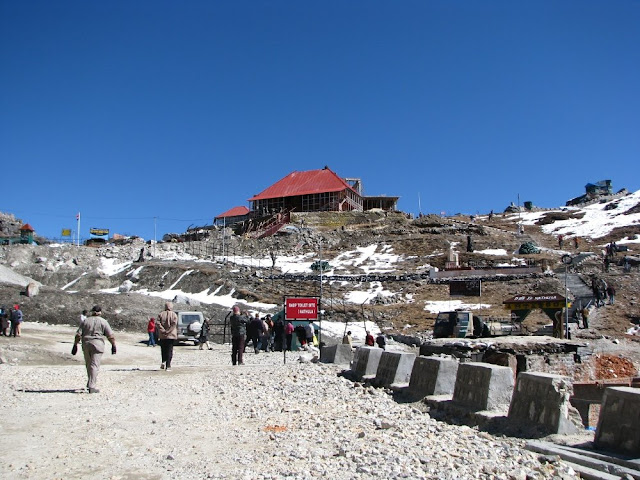 Spoke to few of our soldiers there. They get along well with the Chinese but language becomes a barrier and limits more conversations.

Our next stop was a Baba Mandir. Baba Harbajan singh was a soldier who after death appeared in a friends dream and requested for a temple being built in his name. Wishes made here are believed to be fulfilled. Our driver suggested that we should see the original Baba temple and a place from where the KCD would look great. He convinced us to see this place by saying – Delhi Jake Tajmahal nahi deka tho kya faida? (Going to Delhi and not visiting Taj is no good)
On our way we passed through a small village called Thukla. Here we had delicious hot Maggie at a small hotel. Indeed the view of KCD from here was spectacular. 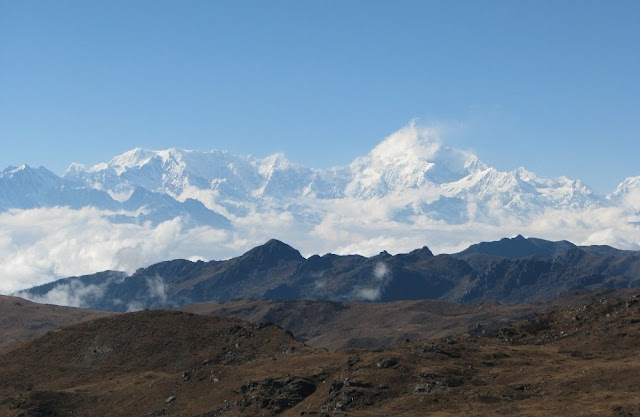 At Baba Mandir, the army had arranged free lunch to all devotees on the occasion of Guru Nanak Jayanthi. It was good to see the soldiers, cook, serve and clean the plates. They greeted us; spoke to us, offered food and water. They did not even let us clean the plates. It was a nice atmosphere. We visited the bunker of Baba. 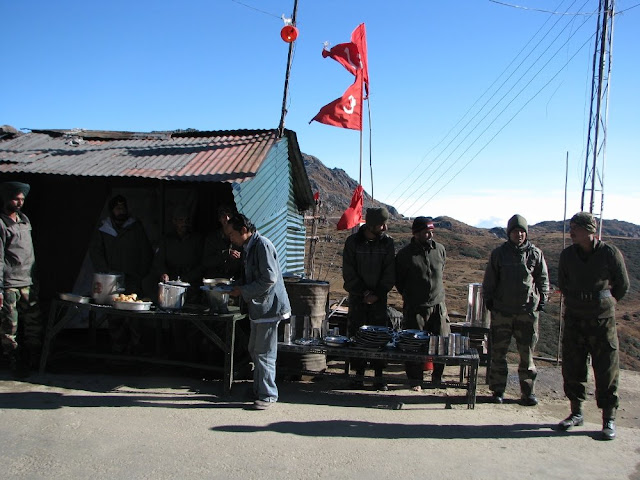 On the way back, we stopped at Tsongo Lake. Here you can find many yaks for ride or just a picture. The drive back was very beautiful with clouds flowing into valley as the sun displayed its usual strokes. 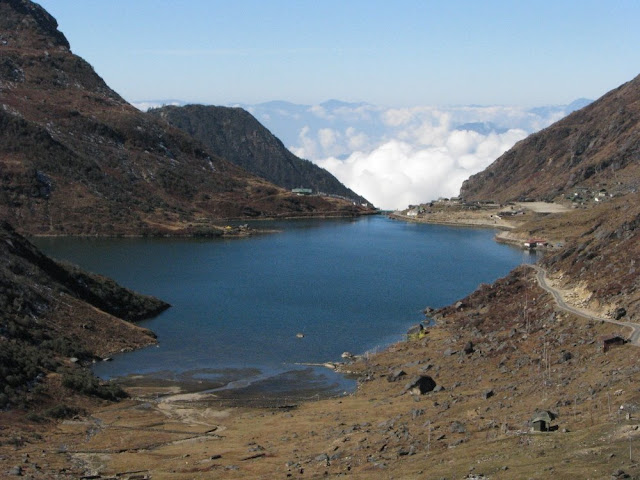 To Be Continued....
India Sikkim Travel