Next morning, at 6:00 Am it was a view, I had never witnessed before. From my balcony as I stood enjoying the chilled weather, I could see the sunlight act like a spot light on the Kanch-Chen Dzonga. And the mountain turned yellow, orange and then bright white. My dream to sit in a locale overlooking the mountains, sipping on a cup of tea finally came true. I could not take my eyes off the beautiful sight. 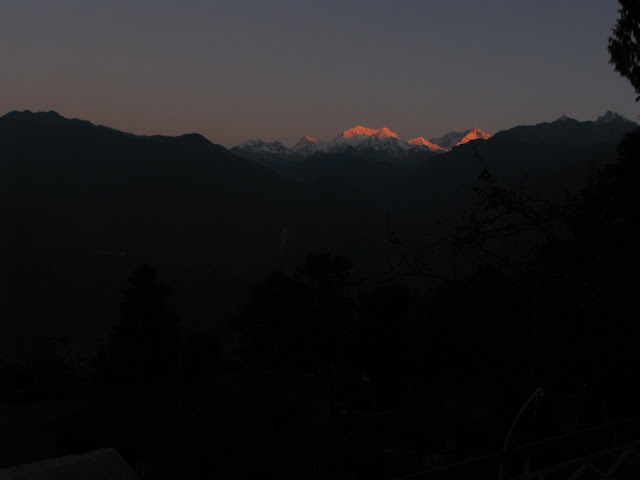 I got on to a chat with Tshering. He named for us, the different peaks of Kanch-Chen-Dzonga range; explained to us about the communities in Sikkim – Lepcha(The original inhabitants), Bhutia’s (Migrated from Tibet) and Sikkimee Nepalis (Migrated from Nepal and are now 70% of Sikkim Population). Several years ago, Bhutia’s and Lepcha’s signed a peace treaty keeping the mountain Kanch-Chen-Dzonga (KCD) as the witness. For Sikkimese, KCD is not simply a mountain; it’s a local guardian deity. I realized how important it is to know the local sentiments before traveling to a place, without which it is meaningless to be in a place. Every year sometime in July or August a festival is celebrated to worship the KCD.

After Parota’s & sabji for breakfast, we left for sightseeing around Pelling. Our tour plan was such that we had new vehicle and new driver each day. We drove to Rock Garden; Rimbi & Kanch-Chen-Dzonga falls. Kecheopalri Lake is a very sacred lake and a wish made here is considered fulfilled. Another specialty of this lake is that, even though it is surrounded by trees, not a single dry leaf is found on it. It is believed that bird’s pick the leafs away. 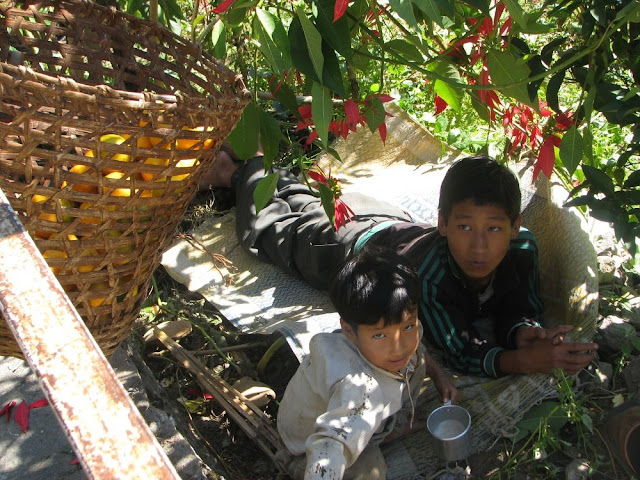 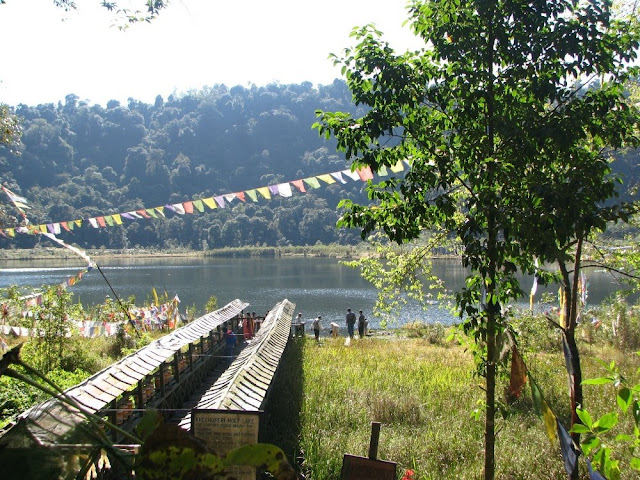 We went to Pemayangtse monastery; with its big beautiful prayer bell; painted walls; several flags with written scriptures, tied all over the place fluttered with the wind; young monks practiced some form of martial arts in the front yard, which was interesting to observe. Peaceful Buddha idols added so much beauty to the already serene atmosphere inside the monastery. 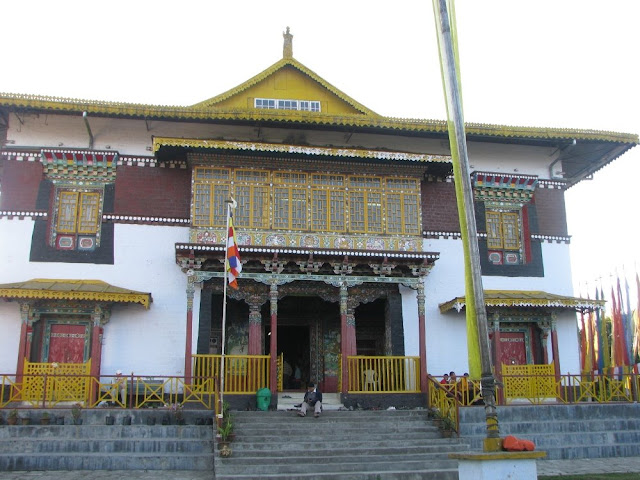 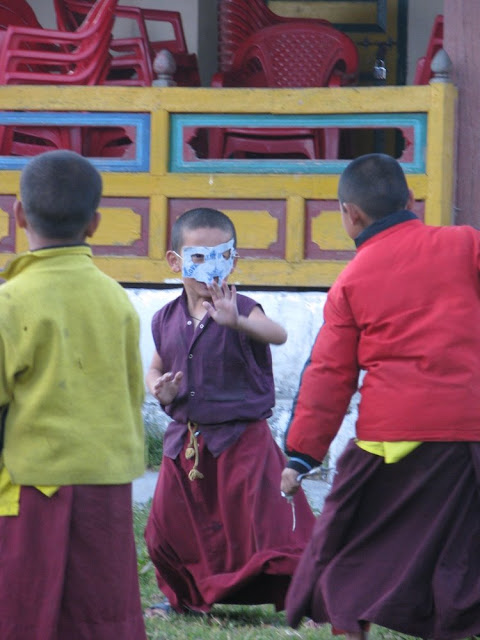 As I was interested in knowing more about how people lived there, we dropped rest of the plan from the itinerary and instead asked the driver to take us to some village. Kumar, a small boy joined us for the rest of the drive and he took us to a small village near Pelling by name “Char Gharey”. 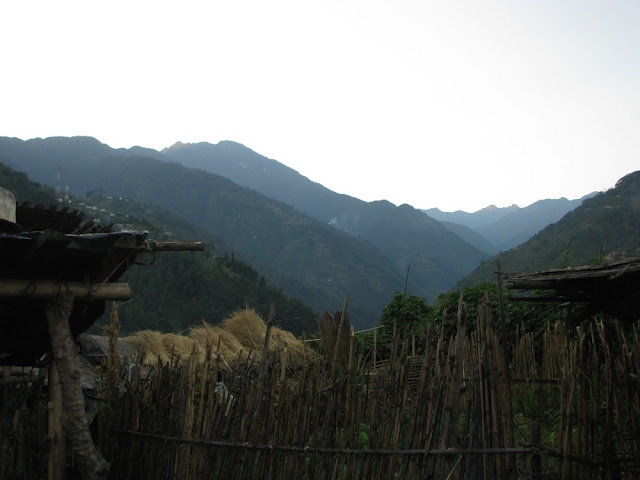 We walked into some houses, interacted with villagers. All were very kind to show us around. The houses have a very different construction from ours. Each room is like an independent house; one shelter just for kitchen; another independent shelter as bedroom and so on. 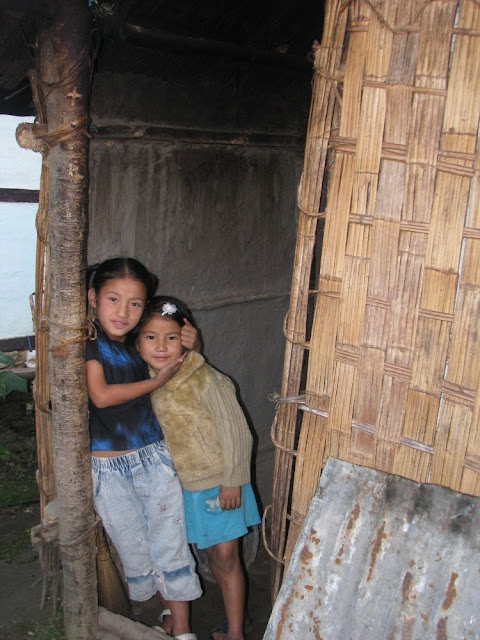 We met a school teacher by name – Premkumar Suba. He travels about 2 hours to school every day. He teaches English and Social science to primary classes. He introduced to us, his 2 year old daughter and told that he had always wanted a daughter and because she was born fulfilling their strong faith to have a daughter, she is named Ni…., which means faith. Happy and surprised, I asked why he had wanted only a girl child. He told that in Sikkim a girl and boy child are equally treated. The main difference he thought was due to dowry system, which was not present in Sikkim and most often it is love marriage. Of course there are few restrictions such as religion etc but even that is minimal, he says. He told us that prayer flags contain mantras which are believed to reach God as it flutters in the wind. He is a Hindu Sikkimee Nepali. When I asked him about Ganapathi painting that I saw in monasteries he told that most of Buddhist epics are close to Hindu epics. (It is now after reading S L Bhyrappa’s novel Sartha, I realize the reason behind similarities)

Next morning (Nov-12th), After Breakfast and thanking Tshering, we left Pelling; kissed good bye to kCD which was today covered with cloud and more snow. 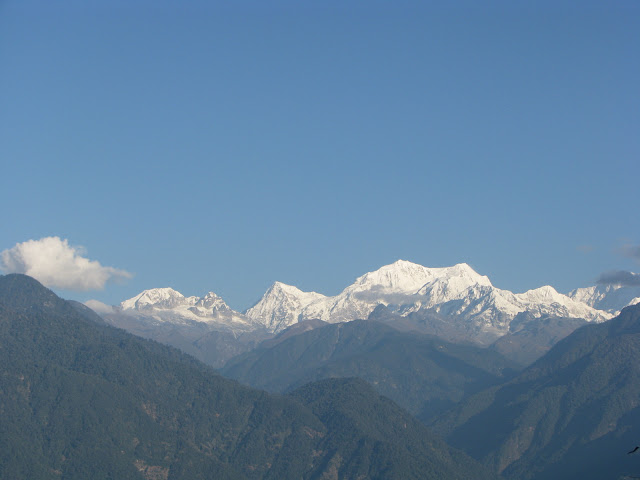 Gangtok is 5 hour drive from Pelling. On the way we stopped at Leping to view a Shiva temple; which is situated at a beautiful locale by Theestha River and overlooking the hills around. We reached Orange Village resort at Ranipool, Gangtok at around 2:00 PM. Took a walk down to a river.

Our tour agent called us to inform that we had to be ready at 7:00 AM next day and briefed us our plan for the day. I was excited to go to Nathula Pass, the coming morning.

To Be Continued….
India Sikkim Travel