Trees Around My House - 2 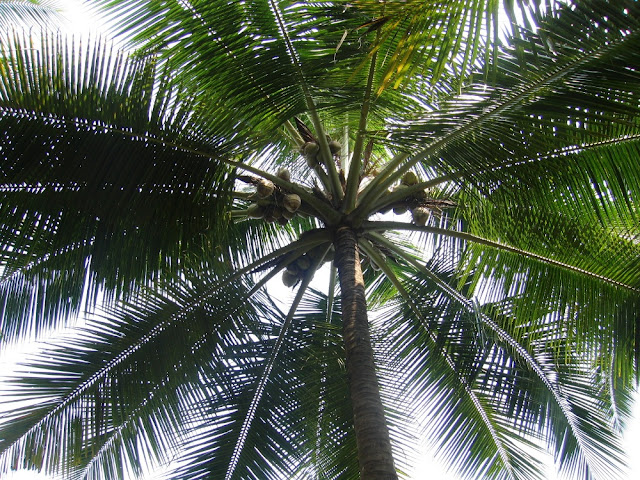 We have about 50 odd coconut trees around the house. As our ancestors have named it, indeed it is a Kalpavraksha – A tree from the heaven that can offer anything desired. Every part of the tree is made use of -Tender coconut to drink; the grown one for cooking or to make oil. The leaves are stripped to make broom stick and the rear end of the leaves can be used as fire wood or for children, can be converted into a cricket bat. After you rip off the outer cover of the coconut the coir is used to make ropes and mats. In older times we used to even tie the leaves crossed to convert it as a shelter, when shamiyana’s were not in use, these were the substitutes. Now we can’t deny the word selected by our ancestors to this wonderful tree, can we? I used to try climbing it and had rashes all over my leg once. It requires a very good skill. Every month we got the grown coconuts plucked and to me the worst part was to collect all of them and get to the common location where we stored them all. Every year we make oil out of the hundreds of coconut collected. First the coir is removed, and then the nut is cut into half, dried for several days until the nut is easily separated from the dried flesh which is called Kopra. Kopra is then sent to mill to make oil. When you break the coconuts, the ones that are very old would have sprouted and inside the nut we find an excellent, sweet and tasty growth that we call “Moonge”, which is still a treat to us. Even today my mother keeps them stored in the refrigerator until I arrive. 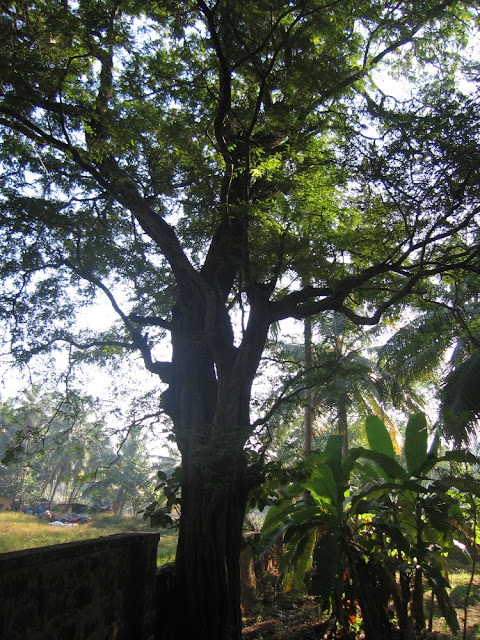 Tamarind tree has a story similar to the coconut tree. We use tamarind every single day for cooking sambhar. So it follows the same procedure. During a suitable time we pluck all the tamarind and then dry it for several days. Then we peel off the outer cover (Which for me is a boring job but forcibly done.) Amma, Ajji and Appa would separate the seeds out. The flesh is stacked for use during the year and the seeds are sometimes fried and eaten. The outer cover and some seeds are thrown out on the road. A belief from ancient time is that if done so there would be more tamarind on the tree during the successive year. Before the tamarind is plucked, several fall off and our neighbor’s kids come to steal them, so we had to be alert to chase them away. Ajji used to be our guard in such matters. “Yer Ambhey Aow” (Who is that man?) she would run shouting at the kids. 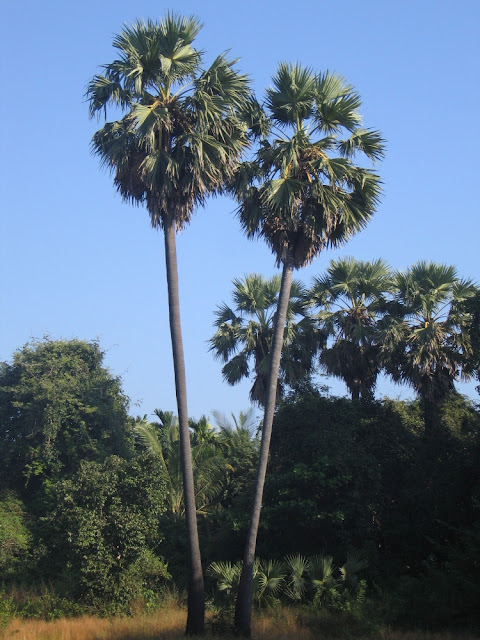 Several stories haunt me about these trees. Two beautiful palm trees stand even today in front of my house. When I was small, my sisters would fool me by saying stories about them; that they were ones lovers and a curse had them turned into trees. So they made me apply powder on the bark of the tree to heal their rashes. Well these fooling techniques are kind of hereditary. My elder sister would fool my second sister and my second sister would fool me; Anupama and I would fool her brother krish.

Another memory related to this tree is about a unique game invented by my Muslim neighbors. We would play cock fight with the fruit from the palm tree. The fruit is not eaten, so instead we assume that they are cock. :-) We would select the best fruit each and hit the opponent’s fruit as hard as we can. The fruit that rips off completely is a loser. 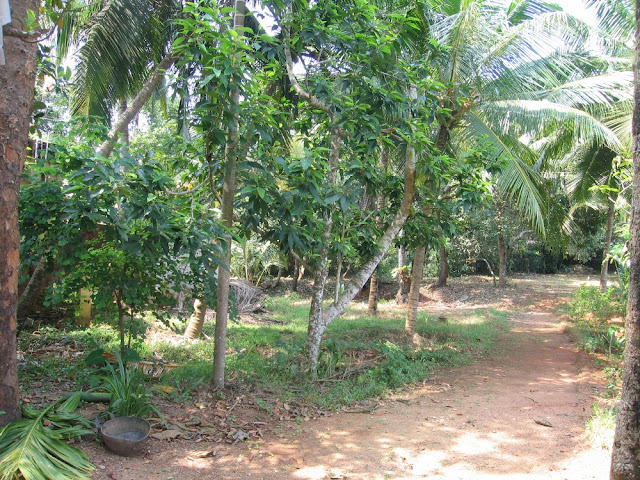 I have two memories related to this tree. When I was a kid, I used to wait for my mother to return from her party meetings (My mother was a politician). When I saw her coming, I would hide behind the Sampige flower tree and surprise her.

The second memory is with Vasu, my childhood friend. Sampige flower spreads a beautiful fragrance which some like and some don’t and my mother was in the latter group. Vasu’s mother on other hand loved the flowers, thus he would come home to collect them for her and in turn I would get to play with him for a while. 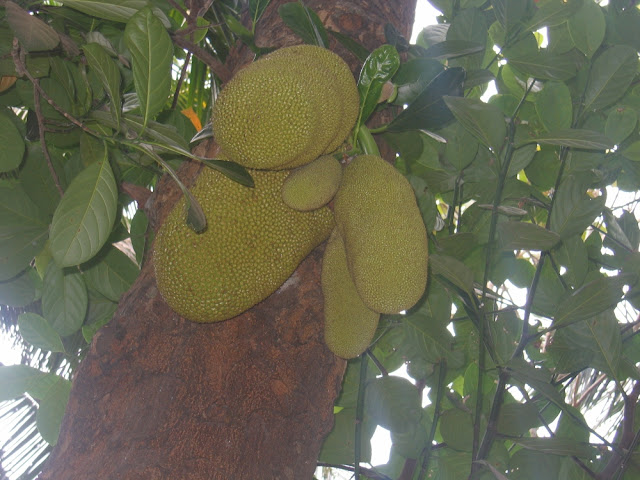 We use the leaves to cook “Mudde”. Jack fruit leaves are pinned together with sticks (left after peeling off Coconut leaves) to form a cup shape, into which the idli – rice batter is poured and steamed; the fragrance from the leaves blend with the batter to provide excellent taste. I don’t like the fruit a lot but my grandmother and father love it. We lend the extra ones to relatives and friends. I love the seeds though; mother cooks excellent sambhar from them. We have about 3 jackfruit trees. Out of them one is not at all sweet, so it is generally used for cooking curry’s or making papads. Ajji and mother make a paste out of the jackfruit after separating the seeds and they make papads out of it which are dried and stored and as and when required, fried and eaten. Even today every year, we use homemade papads, coconut oil and tamarind.

Well we do not own this tree, but our neighbor does. Nobody wants to break their head with the almond, because it’s a tedious job to peel of the flesh, then nut etc. The owners had abandoned it and we enjoyed the freedom; hit the Badam with stone until the shell breaks. The hard work isn’t very relishing. It is much easy to buy some Almonds from shops.
Garden