On the 3rd of April, our Prime Minister (PM) addressed the nation again. He assured people that everything was on track. He even apologised for having caused inconvenience to the migrant workers and the poor. He thanked people for contributing to PM care, a fund raiser initiative for fighting the pandemic. As always, rhetoric superseded data in his speech. Before taking leave, he announced another task for the citizens. On the 5th of April, at 9:00 PM, he wanted everyone to switch-off the lights at home and light lamps, candles or use flashlight for 9 minutes, as a mark of solidarity. With all that had gone wrong last time, we could have expected nothing but a circus this time around. People indeed are fed up of staying indoors.

After weeks of being locked indoor, my neighbours seem to have finally decided to show their faces. They are now seen playing shuttle badminton or taking a walk in the premises. The apartment opposite to ours, is regularly conducting a sort of shuttle badminton tournament in the evening. Of course, the children and adolescents are finding it difficult to contain their energy and enthusiasm under this lockdown. They have to be constantly kept engaged.  Me on the other hand, have been taking a walk in the terrace, which allowed me to take notice of the migrant workers living next-door.

The house next to our apartment is under construction; almost nearing completion. I have seen a few construction workers there for a while now and had always meant to find out if they were doing okay. On the 4th fo April, I noticed one of them at the balcony and asked him if the construction work was still in progress. He told me that they have run out of material and therefore there was no work to do.

There is Upendar, a carpenter from Bihar and four painters from Uttar Pradesh (Sugreev and his 3 friends). They generally live in the construction site until the work is complete. While Upendar stayed and cooked in the third floor, the others lived in the fourth floor. Upon enquiry, I learnt that the owner, who has recently moved to the first floor, isn't very supportive. With no way to earn, they have to spend on their own. When I asked him if he needed any help, Upendar mentioned that his cooking gas cylinder was empty and the nearest filling station seems to be demanding double the money. Speaking to my watchman, I learnt that there was another filling station nearby who charged only Rs 20 extra. I directed Upendar to that place. This incident reminded me of others who may be in need of help.

Several years ago, we used to live in an apartment complex, located three blocks away. An old couple, whose son lives in the US, lived in the opposite flat. Though we had stayed there for only a year, we had developed a special bond with them. I decided to visit them and check if they were doing fine. The old are vulnerable to the disease therefore, even though they asked me to enter, I stayed at the door. They are doing fine and the neighbours are helping them with grocery as needed.

During my evening walks in the terrace, I made it a point to speak to the migrant workers who are stuck in the construction site next to our apartment. Among all, Sugreev is the only one who speaks without hesitation. He told me that with nothing much to do all day, and no one to speak, it was getting frustrating. The vegetable vendors or store owners rarely understood their language and thus it was always a challenge for them to buy what they wanted. Additionally  the vegetable and lentil prices have skyrocketed, making things more difficult for them. All they wanted now was to return to their respective villages.

The roof of every house in the neighbourhood was covered with small yellow dots. Sugreev suspected that it was medicine sprayed from the top. It seemed funny to me that someone would spray disinfectant on roofs, but I had no better explanation at that moment. I learnt later that those were honey bee poops. It is spring time and all trees have begun to blossom. It is interesting that we are now paying attention to nature and understanding it better; something, we have perhaps forgotten.

They also told me that their friends in Delhi are receiving free ration and had no issues. I have often seen the Chief Minister of New Delhi give press conferences with detailed updates on what is being done, the challenges being faced and what remains to be done. The state of Kerala too has handled the situation well. Bhilwara model of Rajasthan is also a good case study. Anyways, the very next day, I bought some vegetables and lentils for the men next-door.

As soon as our PM had announced the Diya Jalao event, astrologers on all television channels took up the responsibility to justify this decision. According to them, this was an auspicious day and time, meticulously chosen by our leader. All religion, in some way are the other, seem to endorse this belief in apocalypse, which according to me, is the constant fear of extinction, that humans live with. It also imposes the superiority of morals and rules established by a religion; which if ignored, may cause devastating effects.

The Hindus believe in the concept of Kali yuga, the final stage in the cycle of four yugas (Stages). It represents a world devoid of morality which will be fixed by Kali, an avatar of lord Vishnu. The Christians, who believe that man is born in sin, consider this as God's punishment. Such claims are well contested in Albert Camus's "La Peste". They also await the second coming of Jesus. The Muslims, on the other hand, seem to believe that they are safe under the protection of Allah and this is the apocalypse mentioned in the Quran. Islamic literature appears to suggest that Jesus will return to abolish Christianity and confirm the truth of Islam. So, with all these belief systems in place, one could only expect extreme behaviours on the 5th of April, by the devotees of God and the Government.

On the 5th of April, at 9PM, the lights went off and people began to light candles and lamps. Others came out to their balconies and terrace to wave their flashlight. We also witnessed some firework. Within no time, social media was flooded with pictures of people lighting lamps and celebrating this event like the festival of Diwali. All Pro-Government news channels and journalists went crazy talking only about this for about two days and turned this into a mega event. There were videos of people bursting crackers, parading the street and setting up camp fires. To be honest, I made a conscious decision not to take part in this show. I found all this absurd and even insensitive to a certain degree.

You can stay at home all day, only if you have one. One may never step out of the house, if one did not have to look for food. One can celebrate this event only if one has enough money to buy some fancy lamps and oil. I appreciate our Prime Minster’s effort and ability to mobilise the citizens, but we need to reflect upon what we are mobilising the people for.

Dressed for the occasion, our PM released a video of himself lighting a huge lamp. He donned a mundu from the South of India and an Assamese gamosa from Northeast India and a Kadi (Cotten) kurta. Self publicity, brand building and showmanship doesn’t seem to have taken a backstage even in such times.

Honestly, that night, I could not sleep well. I had this mixed feeling of anger, sadness and contempt. We were perhaps the only country in this world to celebrate a pandemic. Words fail to express the gamut of emotions I experienced at that moment. Therefore, I chose to paint them. 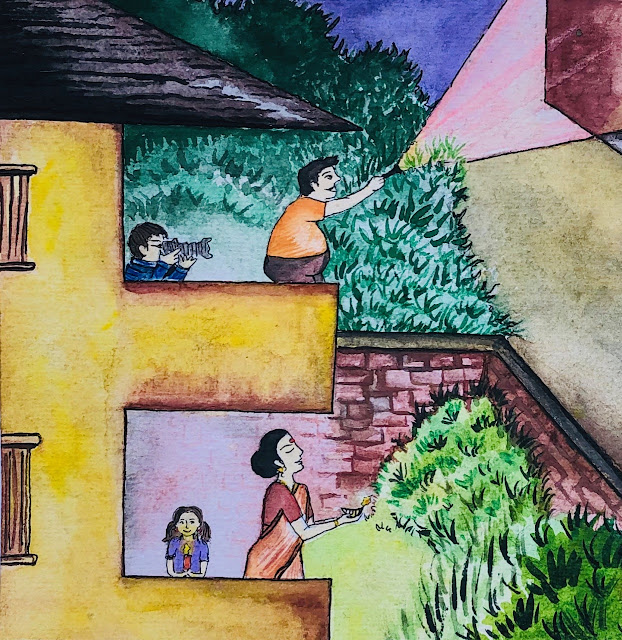 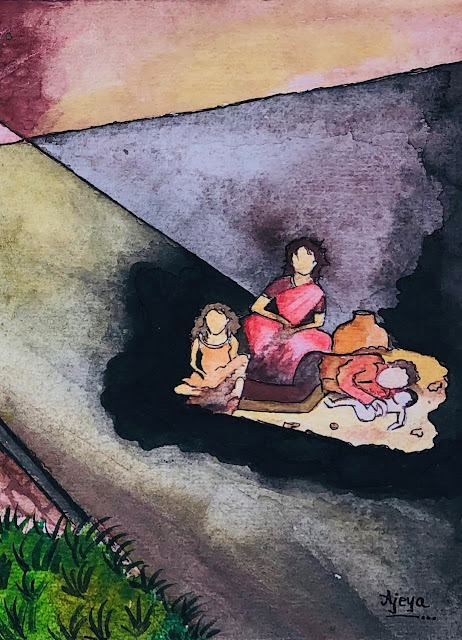 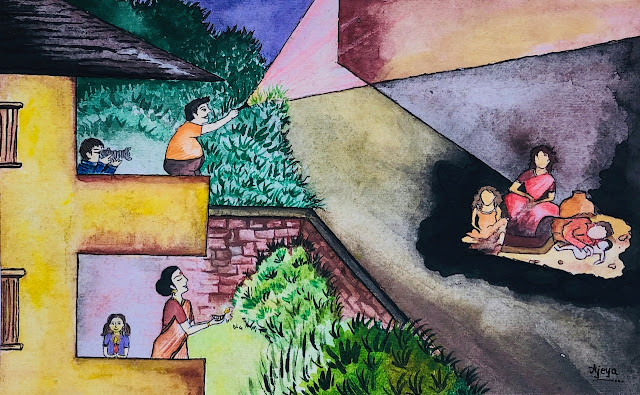