RBI has announced moratorium on EMI (Equated Monthly Instalments). This means that term loan instalments that are due for payment between 1st March to 31st May can be deferred. This includes all home loans, personal loans, car loans, working capital loans and agriculture loans. Credit card dues are also eligible and the credit score of the users will not be impacted. The moratorium will therefore shift the repayment schedule by three months. The borrowers who will avail of this facility will have to pay added interest accrued during the three months after the moratorium expires.

The city of Bangalore is under a complete lockdown; so it seems, in my part of the town at least. Only a few grocery stores are open. The police is confiscating two-wheelers if anyone is seen loitering around. People are asked to walk to the nearest stores to buy essentials. Thankfully, pet stores are open and we were able to buy some food for our cats and the apartment dog. As my wife feeds stray dogs, we also ensured to have a good stock of biscuits for them.

Speaking of dogs, a friend of mine from the University, along with her sister, was feeding street dogs while people in that neighbourhood verbally abused them and asked them to leave. People complained that this would increase the number of stray dogs in their locality. "Care for humans, not animals", they are said to have added. In an other incident, a lady was almost beaten up by the locals for feeding street dogs at night. After several such incidents were reported, the Police has informed that people who are feeding the animals will be issued a pass at the Police station which will help them confront those who are objecting it. The true nature of each human seems to be surfacing during this time of distress.

While there are many landlords who are being kind to their tenants during these times, there also exist some who are asking frontline workers to vacate their home or sleep at the hospital due to fear of contracting the disease from them. Some Students and bachelors living as paying guests are also finding it difficult. A fruit vendor near my house, complained about police demanding a bribe from him. On the other hand, social networking sites, where most of the upper middle class and rich seem to be residing these days, are going crazy with stories of how people are dealing with their boredom.

Instagram travellers are making a list of the places they have visited and their favourite places for various reasons. On WhatsApp and Facebook, people are challenging each other to post a certain picture from a particular time in their life. Women are posting pictures of themselves in sarees, so on and so forth. Well, all that is okay but some are posting suggestions like - "Why doesn’t Government make use of this lockdown to fill potholes and lay new roads?" As if the lives of the labours are of no significance. I saw another educated friend of mine posting a forward on how people have all along been criticising Brahmins for practicing untouchability and now are following the same practice. How does that justify untouchability? Is it so difficult to give it a thought before forwarding such posts? Many of them, in their blind faith towards the current Government have turned a blind eye towards the issues that migrant workers and homeless are facing due to this lockdown. The frontline workers are also struggling with lack of enough Personal Protective Equipment (PPE). Anyone pointing out these issues or shortcomings are trolled for being antinational and anti-government.

These behaviours have proven one thing for sure, that the lucky to be educated and employed graduates of India represent the new Bourgeoisie. These Nouveau Riche seem to view the world with rose-tinted glasses. Their views on this world, often boldly displayed on social networking sites, are devoid of the struggles of the poor. What they do not understand is that they themselves are nothing but a part of modern-day slavery; working for a foreign country, in exchange of a marginal salary.

Personally, I have been busy with my dissertation. I am conducting a comparative study between two characters - Swami (Swami And Friends) and Nicholas (Le Petit Nicholas). Additionally, I am conducting online classes for my students. Thanks to the technological development, students will not be deprived of education. We are soon to begin our University classes online.

During free time, my wife and I decided to revisit some traditional dishes. Scorching summer helps the preparation of Sendige (Sun-dried spicy rice and sago paste). Sendiges can be prepared from different ingredients and can be stored for several months or even years. They are deep fried in oil before being served with rice and curry. 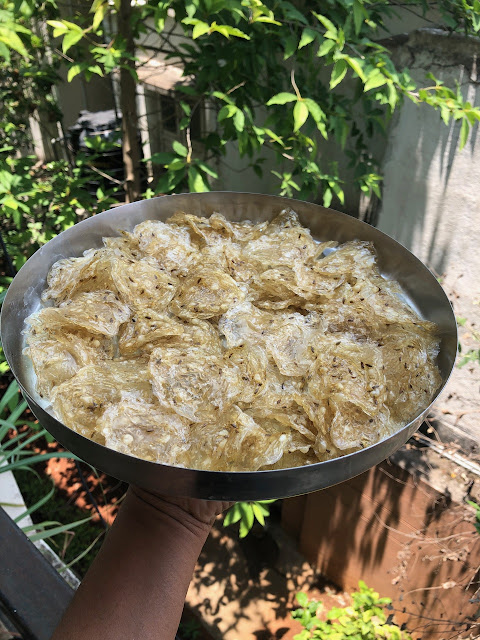 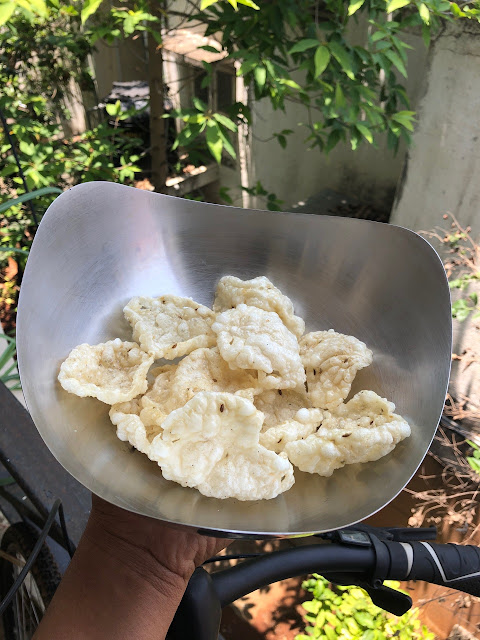 A stray cat visits us every now and then. When she had first come to our house, looking for some food, she was extremely thin and weak. She would gobble up everything that was offered in a minute and ask us for more. We therefore named her Baki (Short form for Bakasuri - Imaginary feminine form of Bakasura - A demon from the epic Mahabharatha, who ate a lot). No, we are not being mean to her. It's a common colloquial usage in our culture to call someone so, if they are seen gobbling and eating excessively. She has been doing good now. Currently, she is pregnant, hence she spends most of her time at our place. She visits us at least two or three times in a day. 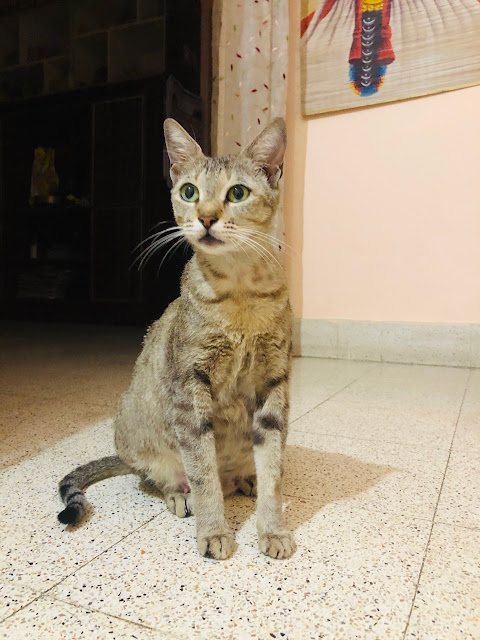