My alarm went off at 4:30 am. I noticed that many in the hostel were getting ready for the same trek. That was good. At kitchen, I met Bianaca from Germany. She was traveling alone and was a bit unsure about this trek. We decided to trek together. The bus was on time and they dropped us at the start of the trek. It was a bit scary to see the mountains fuming out steam. This was an active volcanic zone. Despite that slight fear there was excitement and when I saw hundreds of people at the parking lot, I knew that this was one of the most popular treks in NZ. 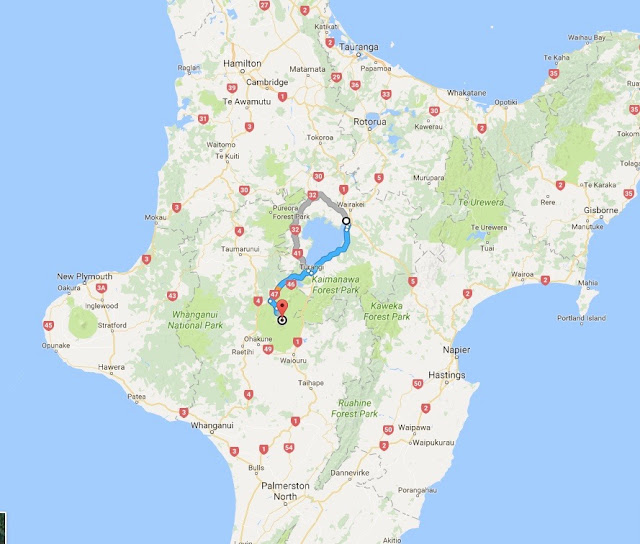 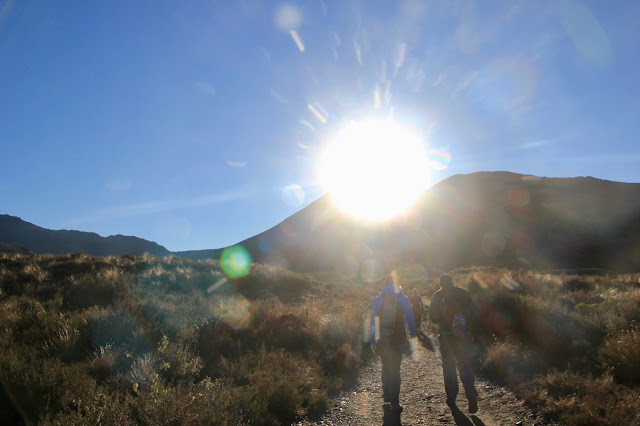 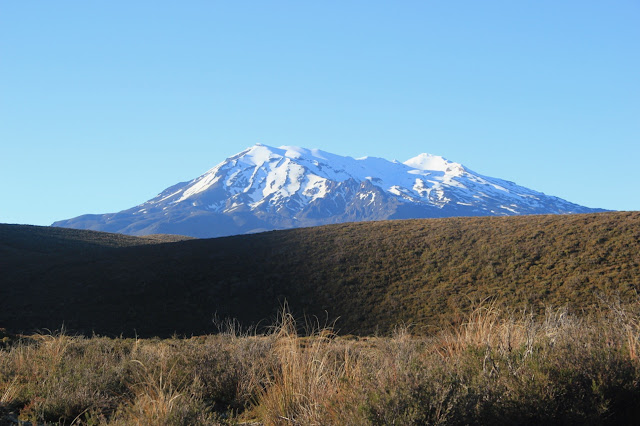 So, Alpine crossing at Tongariro national park, a 19.4 km walk is the best part of northern circuit (43km, 3-4 day loop). It takes about 6 hours and 20 minutes to complete this trek. It has three peaks that are active volcanos - Ngauruhoe, Tongariro and Ruapehu. If you want to trek at least one of these peaks, then you need to be fast so that you can catch the last bus back at 4:30pm. Else, you have to have your own transport. Mt Ngauruhoe was very tempting but I simply did not have the time to do it before the time limit. But in a way that was good as we spent more time by the red crater, emerald lake and the blue lake.

There were about 500 or more people trekking this stretch on this day and it is normally that crowded. It is one of the most popular treks in NZ. There were a lot of Lord of the Rings fans who kept identifying the spots shot in the movie. The rocks, the colour of mud and the terrain as very different from that of South Island. A volcanic texture to the entire place created some great shades that gave the place a rugged look. 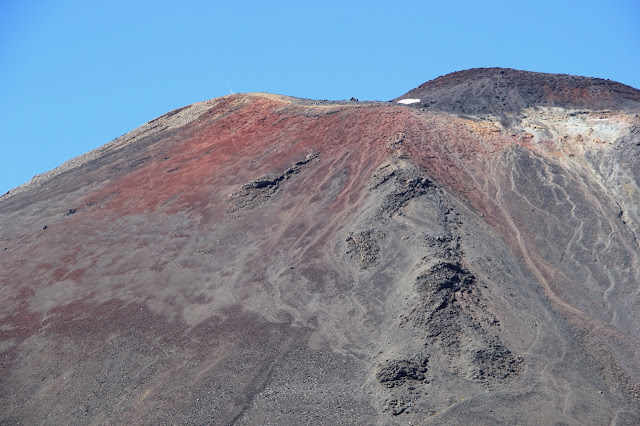 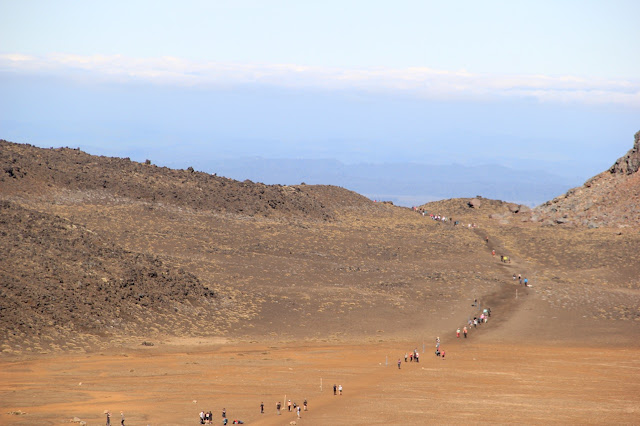 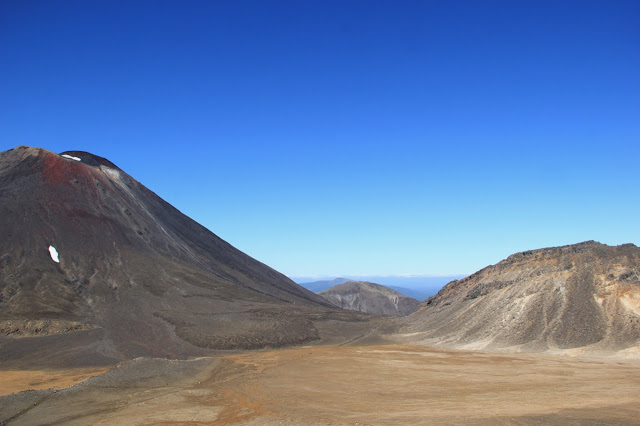 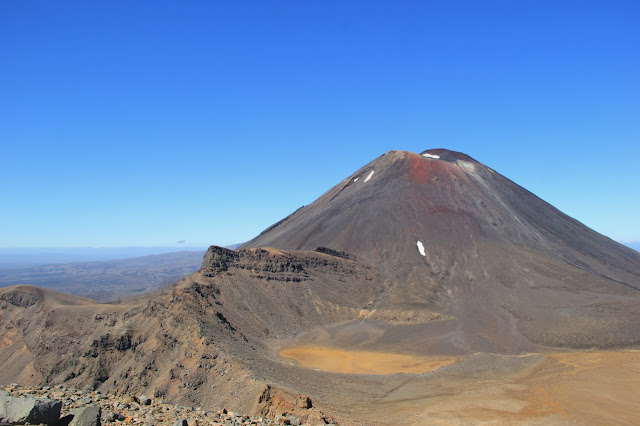 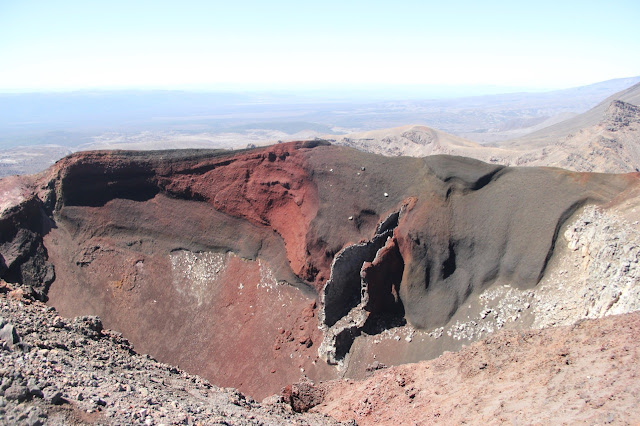 I thoroughly enjoyed the views at emerald lakes. The vibrant colour of the lake was a major attraction. The entire place was smelling sulphur and there were steam vents from one side of the lake. 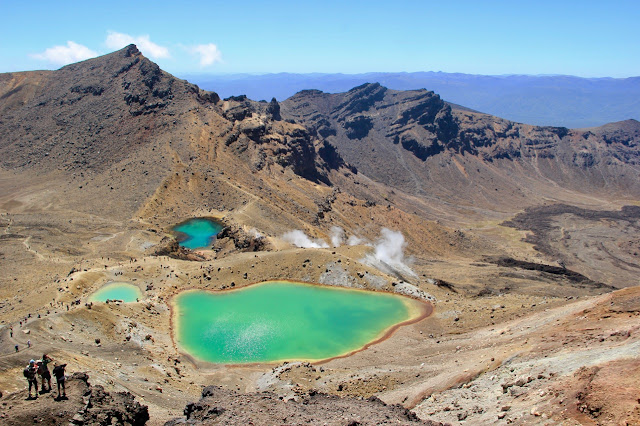 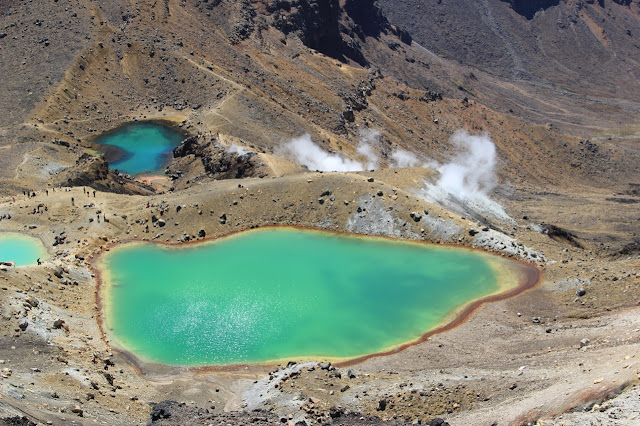 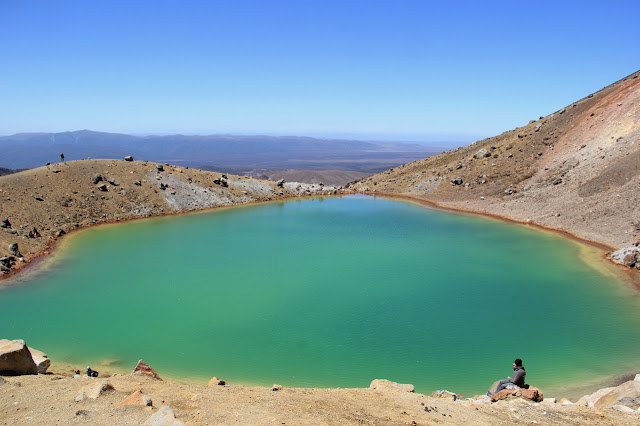 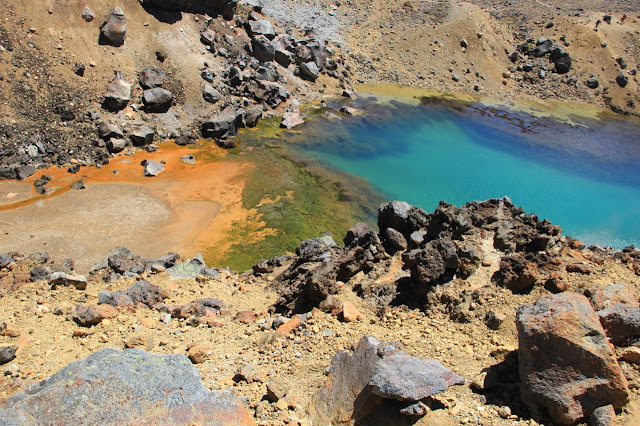 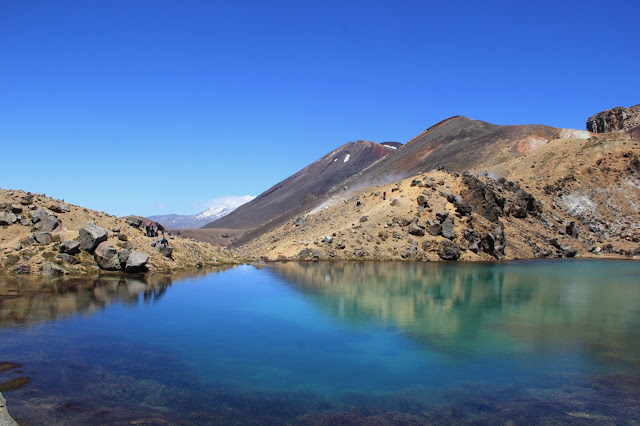 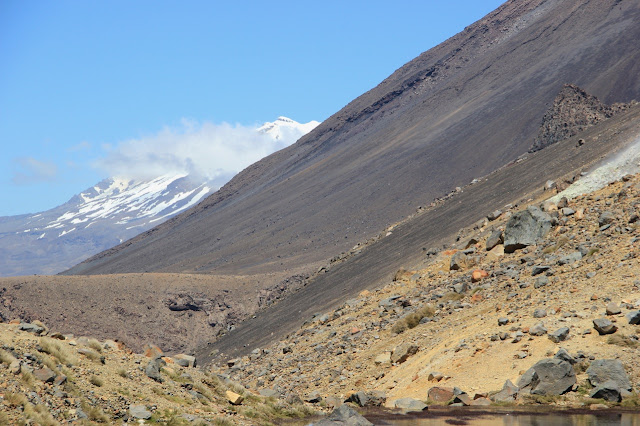 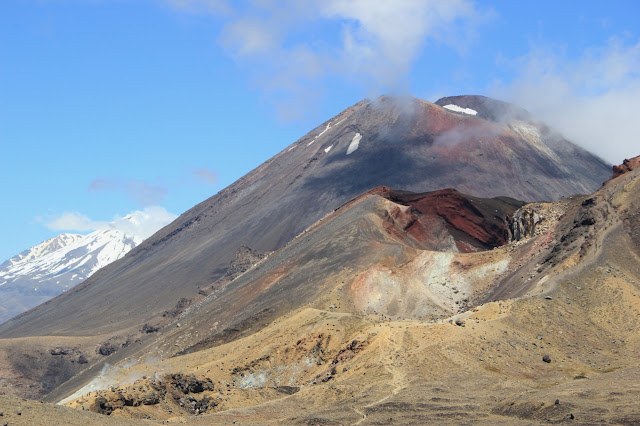 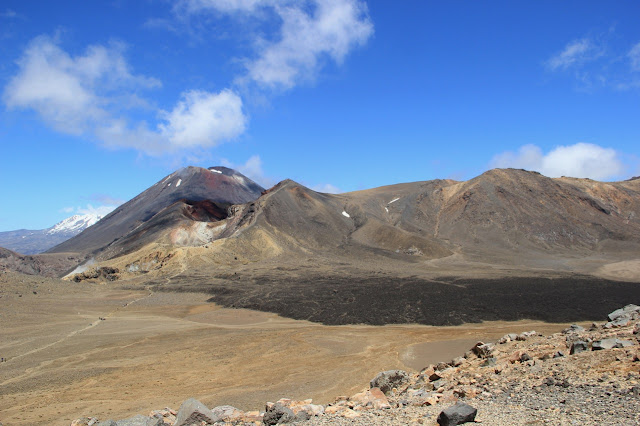 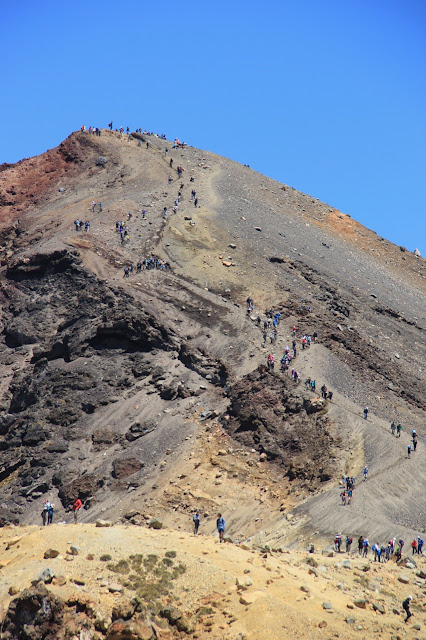 Toast with some extremely tasty hazelnut spread and some fruits made up for my lunch at the beautiful blue lake. 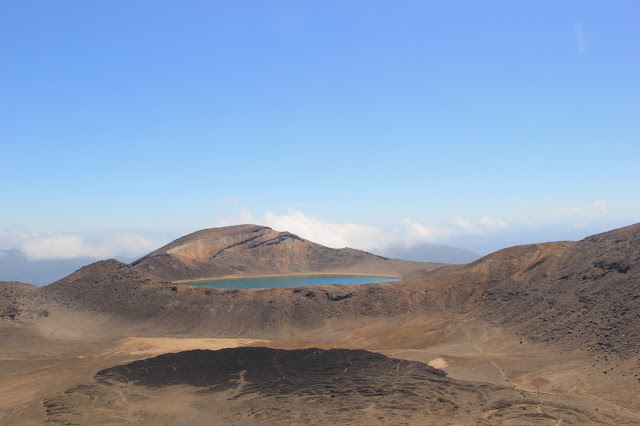 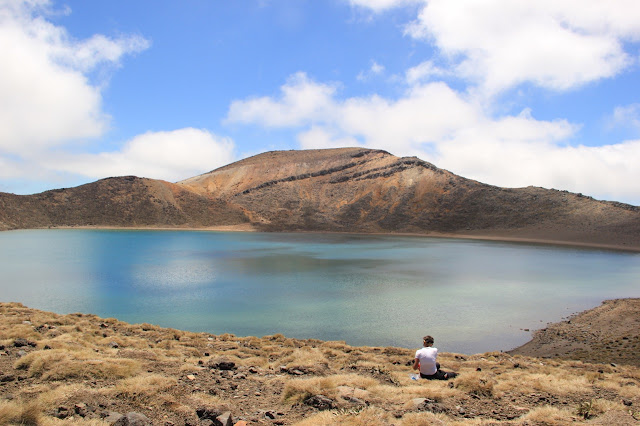 We did see some alpine plants during the descent. There were more steam vents filling the air with the pungent smell of sulphur. It was an amazing experience to be trekking in an active volcanic zone. 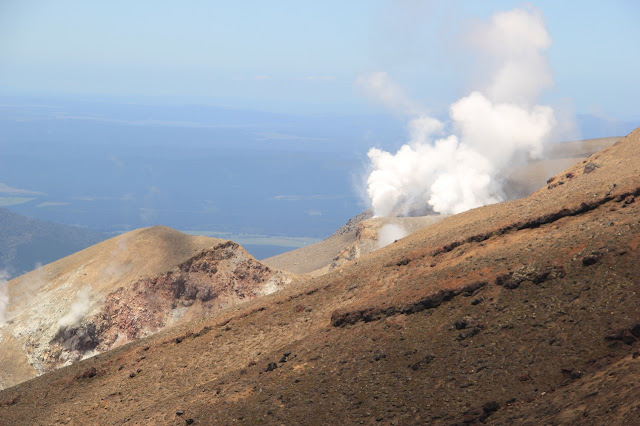 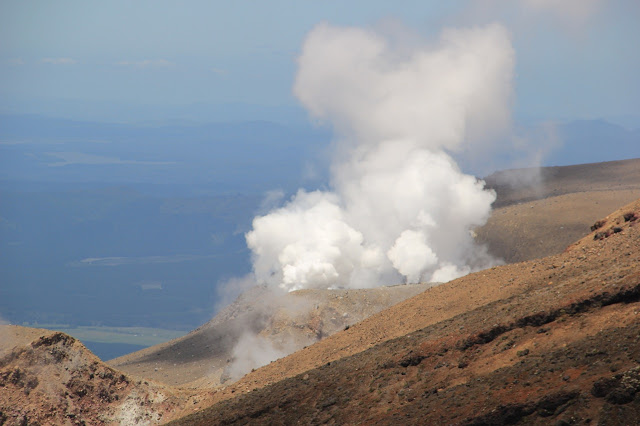 The descent was rather easy and we speeded to reach the parking lot quickly. The trek had begun at 7:10 AM and with a relaxed walk and lot of breaks to take pictures, we reached the other end of the trek (Ketetahi car park) at around 3:40 PM, that is about 7.5 hours. 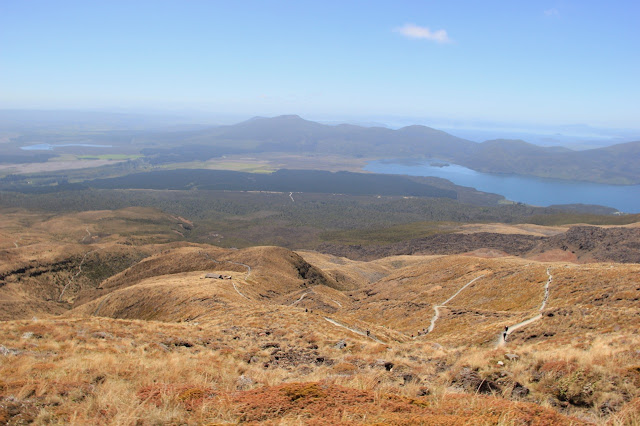 One of the buses was ready to leave and we ran to catch it. It was a pleasant drive back and a sense of having achieved yet another long distance trek dawned on us. It is truly a great feeling. Every trek on this trip has been so different and incredible. It had different landscape, different weather conditions thus creating experiences so distinct from one another.

Back in Taupo, I walked into an Indian grocery store close to the hostel. As I was looking for things, a local was asking for this particular sweet that resembled a Gulab Jamun but was white in colour. The shop owner was unable to identify it for her. I told her that she was looking for Rasagula. She was delighted to recollect that name. The shop owner, who is a punjabi looked at me and spoke to me in Hindi - Aap samaj gaye gori kya bol rahi hein karke. (You identified what the white lady was referring to). The usage of the word "Gori "(White lady) made me smile. I don’t think I can explain that to a non-Indian why it sounds so funny.

The owner and his son began a conversation with me. They were from Punjab and have relatives working in Bangalore. I bought some frozen parathas and headed back to the hostel to cook some of it. I had found my replacement to bread.

Back in the hostel, the three German guys were on a mission. Two of them were dyeing their hair white. It was crazy. We joked about it for a while. They were reading the instructions and laughing at what was to happen. They were traveling for 2 months and they hoped that the colour would fade by a month, before they are ready to leave. They are on a gap year before joining university. They would travel to a couple of other countries after NZ - Like Thailand, Australia, USA and some other country that they have not decided yet. They were really a happy group and their energy seemed contagious. I was part of their crazy affair.

Bianca and I decided to walk up to the lake to view the sunset. I always enjoy watching the fading colours by a water source - a river, lake or beach. It is always a formidable view. 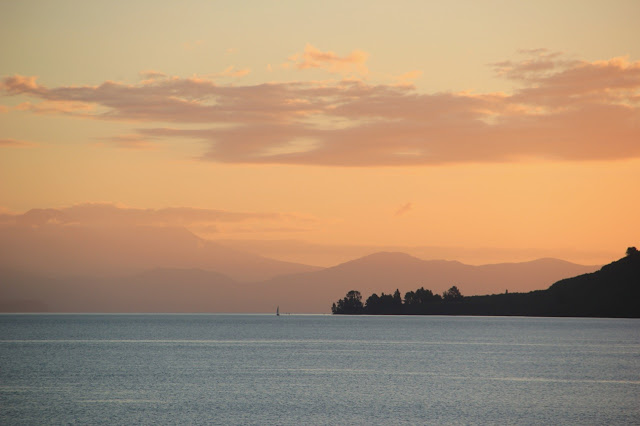 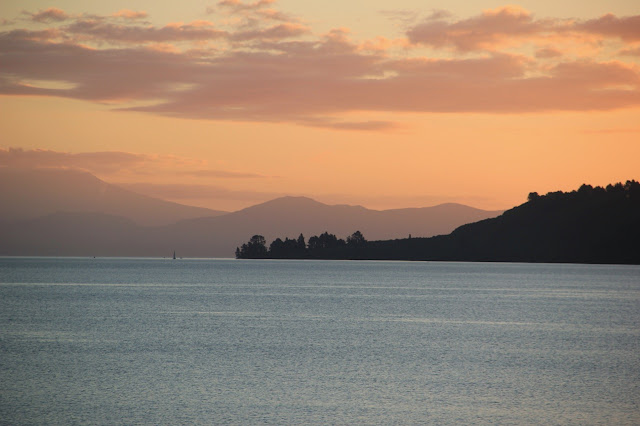 Back in the hostel, the German boys had coloured their hair. One of them already had blonde hair so, he looked okay. The other had originally black hair and he looked way different. He told me that he had shared the pictures already with some of thier good friends and his mother. His mother had replied saying -  I don’t know what to say. At night, the boys left to the free spa. I took a small walk to view the night sky filled with lots of stars.

Another great day had come to an end. Tomorrow, I would be heading to another town were I hoped more more such interesting events to surprise me.