It was a relaxed morning. I had time till 10 AM to checkout. So, I slowly packed my bags and got ready. I decided to head to i-Site and book some of my future transports. i-Sites are information centres that exist almost everywhere in NZ and they help you with your plans. They can book you tickets, hostels and provide all sorts of information that you need. Every town would have an i-Site, that you should be first looking for if you need assistance. Generally, they are also the bus stops for Intercity transport.

At i-Site,  I booked my bus to Wanaka and back. I decided to directly head to Wanaka post my trek to skip the crowd at QT. The girl processing that for me, told me that she liked my name very much. I mean, it was not just a kind gesture but she seemed to really mean it. Repeating my name, she said, "I really like your name." I specifically mention this because I received a similar compliment again later.

After that, I headed to four square, a grocery store and bought some most wanted food for the next three days - Bread, cheese, Bananas, apples and HI-Protien snack bars. I choose food that needed no cooking.

Back in my hostel, I checked out at around 10 AM and dropped my bags off at Info & Track. At a fast food restaurant, I grabbed a pita bread filled with garden vegetables and feta cheese. Seemed like a healthy start for a trek.

I had booked my transport to the Routeburn shelter at around 12:30 PM. That would bring me to the start of the trek at around 2:00 PM.  Our ride arrived on time and we were, I think about 13 people in the van including a family of 5. Our driver stopped along the way for some great views of lake Wakatipu. 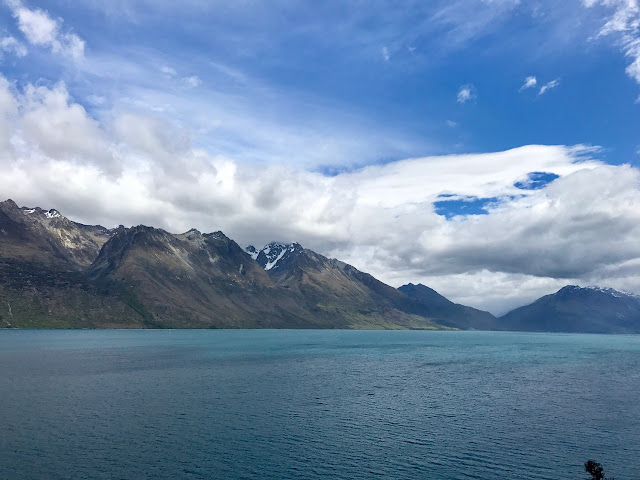 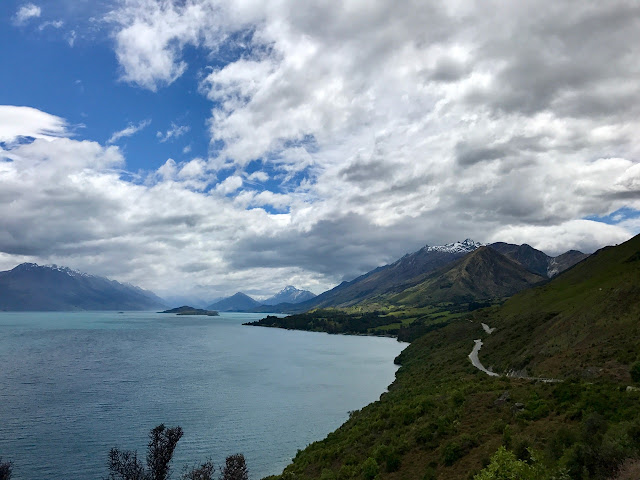 We also stopped at what I consider, one of the most beautiful little towns in the world. Glenorchy is a small town nestled between snowcapped mountains. We stopped here for about 45 minutes for tea and the views as you can see are stupendous. 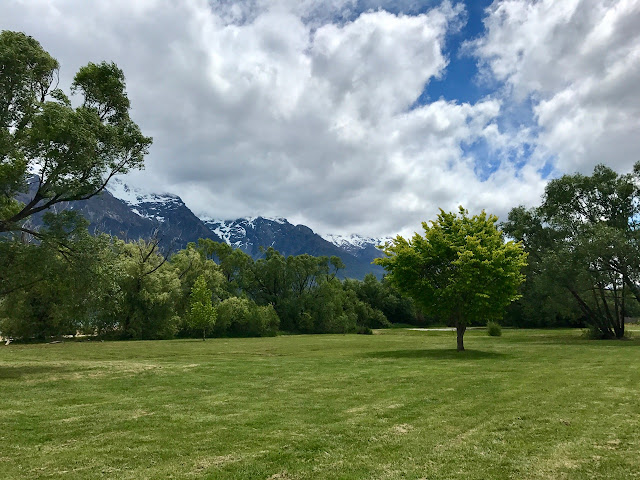 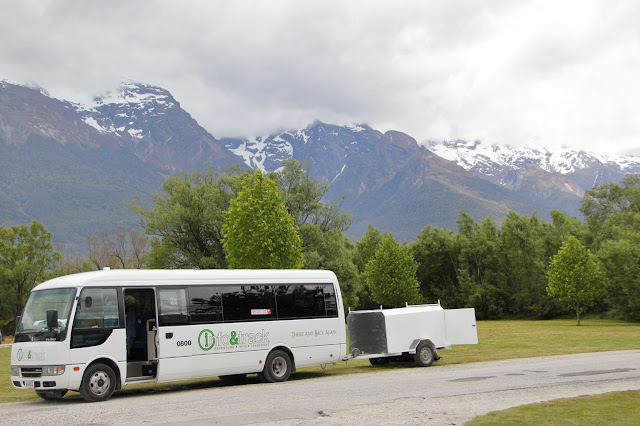 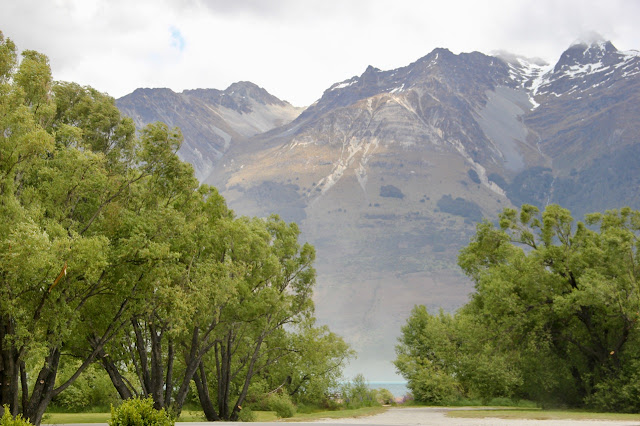 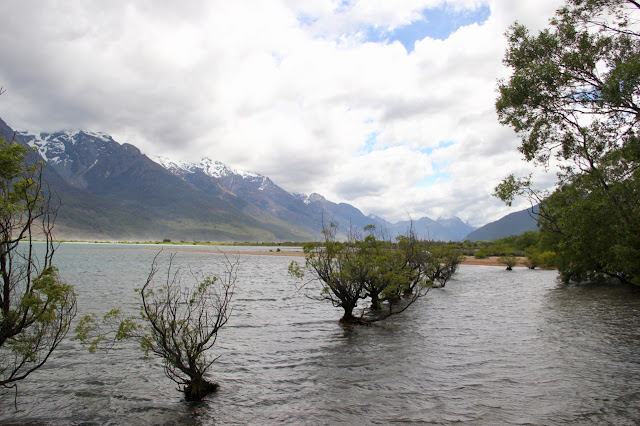 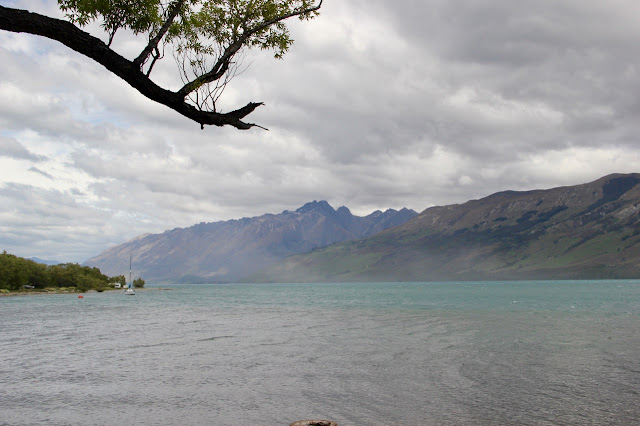 We reached Routeburn shelter at around 2:00 PM. 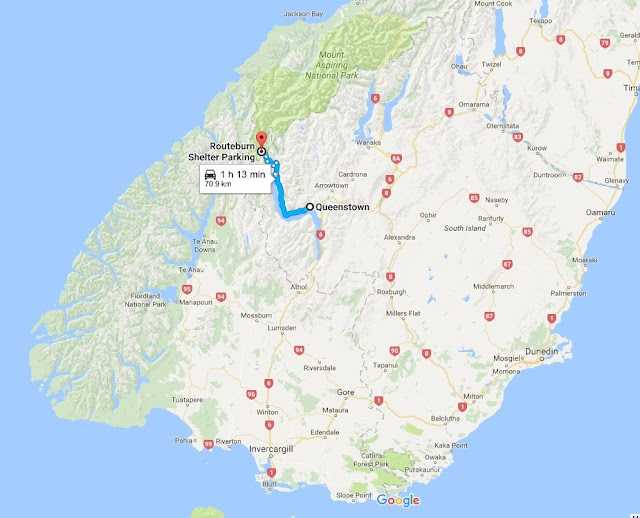 Signboards can easily put you on the track almost immediately. All of us began our trek, separately. The first stretch from Routeburn shelter to Flats was 6.5 kms. 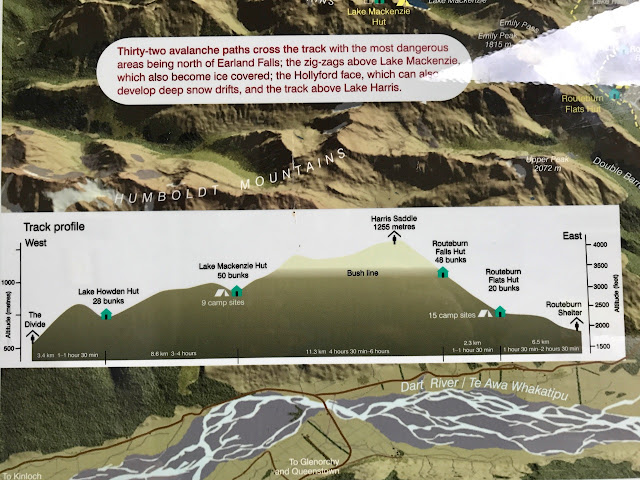 I enjoyed my slow walk along the forest. The air was so fresh. Several people passed me, and many were heading in the opposite direction. Everyone greeted each other with a smile and a "hello". That was comforting as until then I was heading towards an unknown. To know that enough people trek here, was very comforting. Everyone was carrying a 70L bag filled with I don’t know what. An old lady from the family of five, looking at my two small bags, asked me if I had enough food for three days. I replied saying that they were just enough for me. 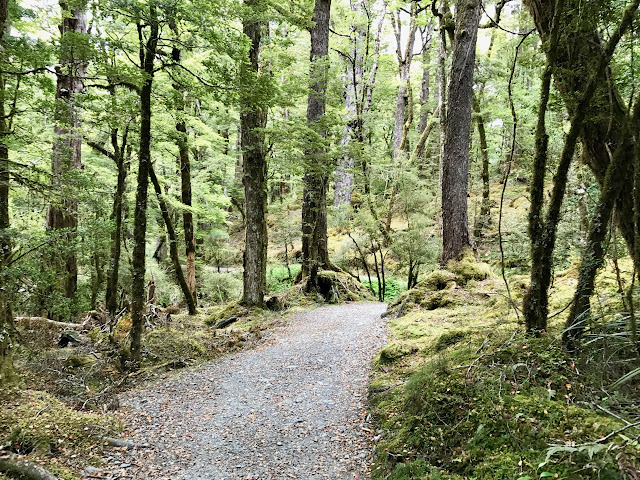 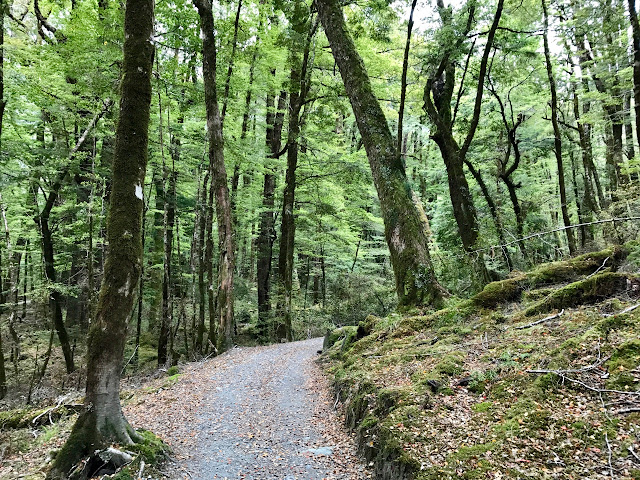 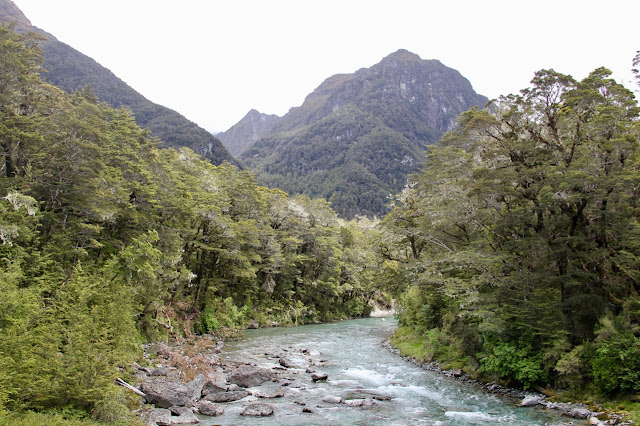 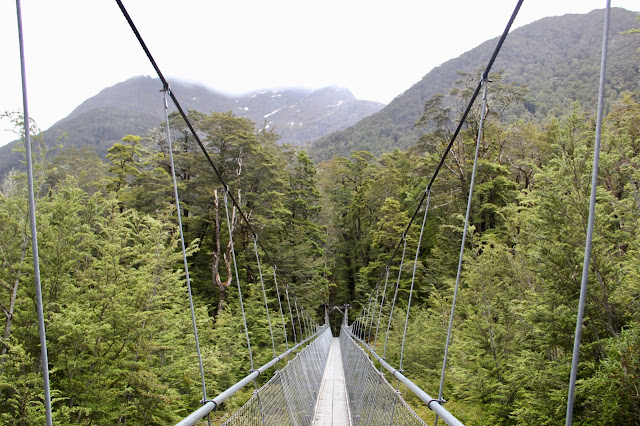 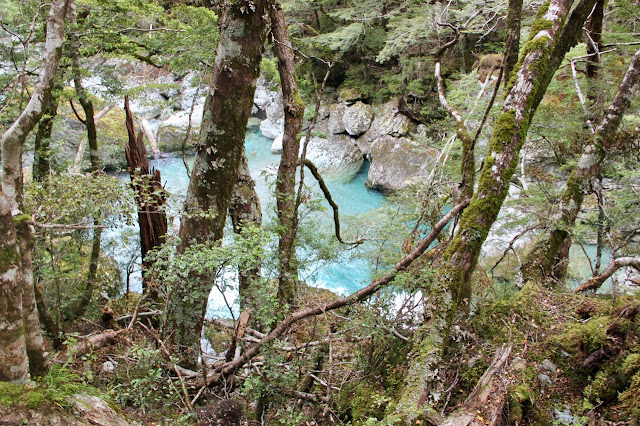 The first stretch of the trek was easy and short. I completed 6.5 km walk in about little more than 2 hours. I reached Routeburn Flats hut at around 4:20PM. 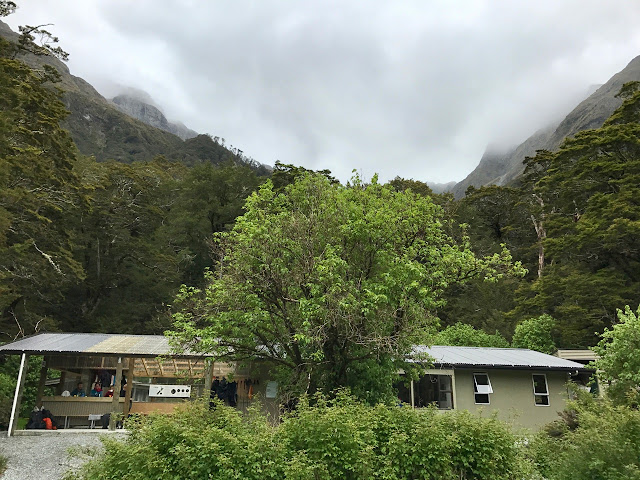 The hut was full of people. A group of youngsters were playing cards. Others were spread across the main sitting area and some sipping some tea outside. I was unsure of how this whole thing worked. Hoping to figure that out soon, I entered the hut and picked a bunker for myself. The hut has a sitting area, a kitchen with some gas stoves (One has to carry utensils and food for self), two rooms with several bunkers and a toilet outside. The bunkers only have beds and you need to spread your sleeping bags over it. But the highlight of this shelter was its location. The hut was situated in a valley overlooking the magnificent mountains.


Imagine a hut in a valley, surrounded by hills filled with tall trees. Not so far away, peaking from between the hills are snowcapped mountains.  A river flows in front of the hut; the banks of which are filled with gravel. Medium sized grass fill the rest of the valley; some still green, others already dry and brown. They are spread all around till they meet the foothills. Well, if imagining that is difficult, here are some pictures. 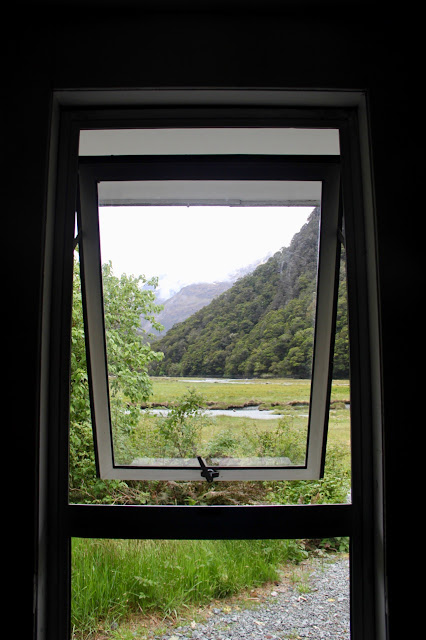 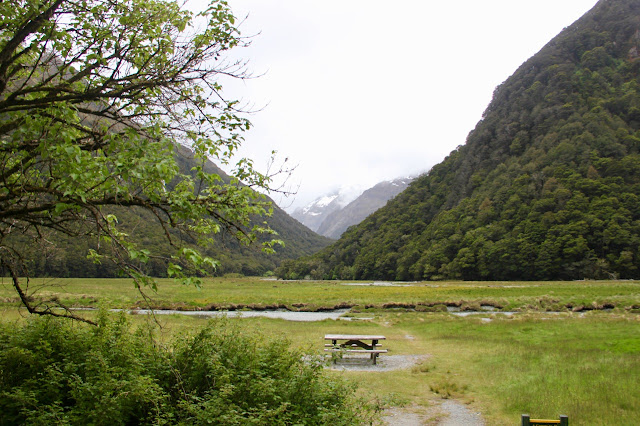 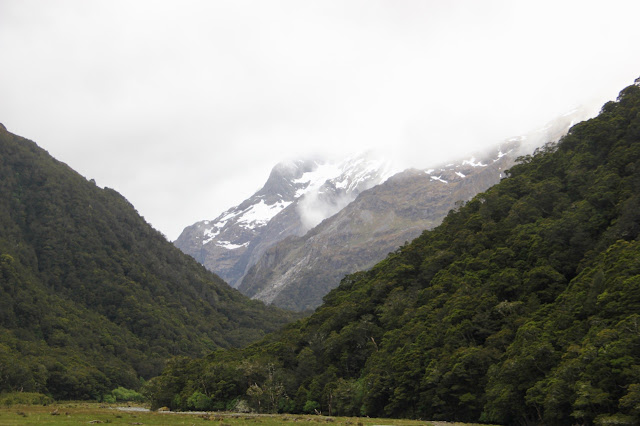 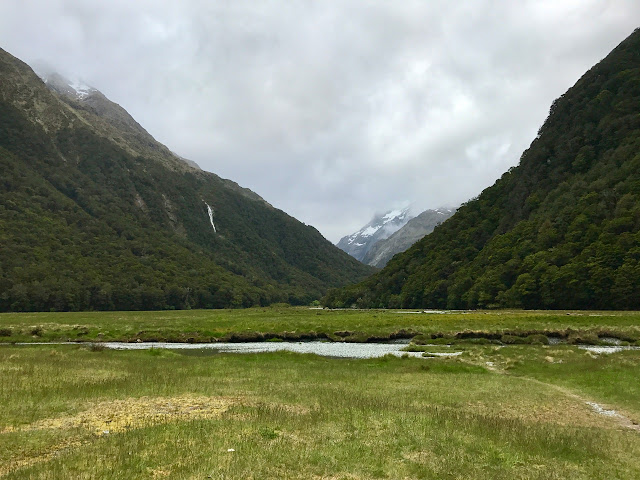 I took a walk around the hut to absorb some these great views. Back at the hut, our warden, a middle aged lady with great sense of humour briefed us about the facilities in the hut and some rules to be followed. During summer, the great walk season, these huts have a dedicated warden.

I had Bread and cheese for dinner. It was surprising for me to see the others cook all kinds of delicious food like Pasta, noodles and what not. They had carried all the utensils and ingredients to cook a perfect home meal. No wonder their bags were huge and heavy. By the way, some of the bananas that I had carried were smashed inside the bag. I cleaned them before putting them back into my bag. So, make sure that you are careful with the bananas while carrying them on an over night trek. If possible, avoid them all together. Apples are a better option.


Anyways, after my dinner, I began to sketch. On the same table sat an old couple from Belgium, their daughter and son-in-law and an Israeli couple. The old Belgium lady was the first to talk to me. She was interested in seeing all my sketches and eventually we began a conversation. She talked about her travels in India. She said that she was pleasantly surprised and impressed to see all that devotion and culture in the temples. She was very animated in her speech hence it was very interesting to observe her expressions as she recreated the moments she had witnessed. Thus began a discussion on Indian culture, religious beliefs etc. By this time others had joined the discussion and the topic shifted towards more serious matters like the recent attacks in Brussels, on-going tension in Israel, racism and terrorism in general.


I must say that it was a very interesting discussion and over that conversation we all connected very well. At times it got a little too intense, specially  within the Belgian family as there seemed to be some internal tension surfacing. The daughter explained how racism is a reality in Brussels where Muslim students have to struggle to find internship while the white students find one easily. The Israelis talked about their mandatory army service and how some skip it with an excuse of Bible study.


We also talked about languages as there seemed to be an interesting mix in the family. The old man was a Belgian French and the lady, a Belgian Dutch. It was also surprising to know that there exists some tension between the French and the Dutch speaking population (Flemish) in Belgium. I realised that after all, the problems around the world are all similar, no matter were you go.

I also spoke to Julie who was the only one in the hut walking the same distance next day, as me. We both had to cover 22kms to reach Hut Howden while others had booked Hut Mackenzie. Julie tells me that she found the two huts in the middle booked almost two months ago. She also suggested me two other must do treks that she has been on - Roy’s peak in Wanaka and Alpine crossing in North Island.

Some of the trekkers who had originally booked campsites (Campsites are available at this hut for a lesser price) had decided to sleep in the main area of hut as the weather forecast predicted an all night rainfall.

At around 10 PM, electricity (Solar) was cut off and the entire place plunged into darkness. That was when I realised how deep into the forest I was. I was in middle of nowhere, along with travelers from around the world. That thought was really exciting. I had thoroughly enjoyed this day, specially the dinner table conversation. In pitch darkness, nothing else to do, I went to bed after filling my thoughts with the beautiful images of the valley that I had witnessed earlier that evening. 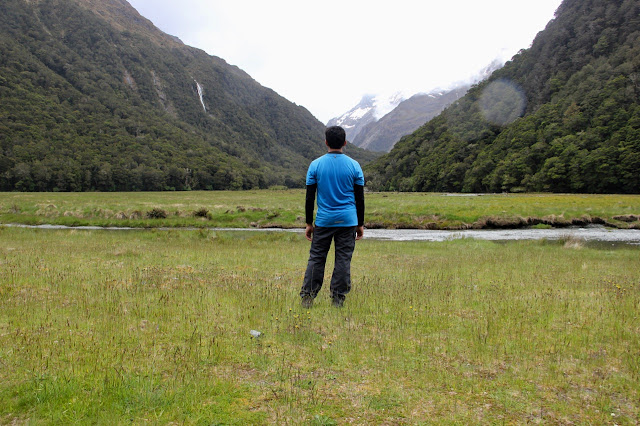