Somewhere post midnight, a sudden scream woke me up. An Indian, who was sleeping in the bunker above me was mumbling in his dream with occasional loud cries. Others in the room woke up by the noise as well but as he went silent after a while, we went back to sleep. Well, apart from that one instance, there was no disturbance until late that morning when I woke up and got ready to leave the hostel.

I walked to the Department of conservation which is only a few blocks from the hostel. Almost every town has a DOC that helps you with all the details you need regarding tramping in NZ. Here, I enquired about the Routeburn track. A girl who attending to me, informed that the entire track is of 32 kms and there are four huts along the way. However, two of them in the middle are already booked until January so, I had only the first and the last hut. That meant, I had to trek for 22 kms on the second day. She also warned me that the weather was going to be cloudy on the second day and may be with light showers as well.

I contemplated a bit about this situation. I had no clue of how this is going to be and how many people would actually be there or how dense the forest is going to be. But, I very badly wanted to do this trek. So, I thought about it for a while. Despite the unknowns, I was confident that I could do a 22km trek in a day considering the extra day light I would get. I recollected my experience of hiking pikes peak in Colorado Springs, a fourteener in 2004 which was a 21km hike. I also recently walked for 75kms in 2 days in the Sayadris. That recollection was encouraging. Most of the stretch on the second day seemed downhill so, I was certain that I could manage this. I had already taken a risk of coming to this country wihtout a plan and taking more risks only seemed to justify this entire experience.

So, I requested her to book the first and the last hut for me. She seemed to agree with my justification and thought I should be fine even with that long walk on the second day.  Huts are a bit expensive - NZ$ 54 per hut/per night.  She also directed me to an agency (Info & Track) that can arrange transport to the trails. I thanked her and headed towards Info and track. I booked my drop at Routeburn shelter (one end of the loop) and pickup at The Divide (the other end), two days later. They also store luggages for $5 a night. Since I was not going back to the same hostel, I had to find a place to keep my luggage while I was on this trek. If you plan to return to same hostel, then they normally agree to store it for you.

I needed a good day pack for my trek, So, I went to a North face store to buy one. I was planning for a 30+L bag but found a good 28L one which I could not stop me from buying.

With all that planning done for the trek, I walked to QT garden which has some neat trails to walk on. The view of the town and the lake from here is amazing. I enjoyed a leisure walk along the lake capturing some happenings. The town was in full action with a lot of people busy in some or the other form of adventure activities like para gliding, riding jet boats, cycling etc. 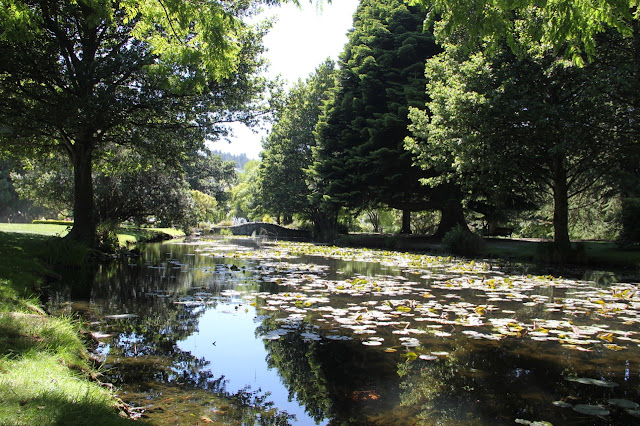 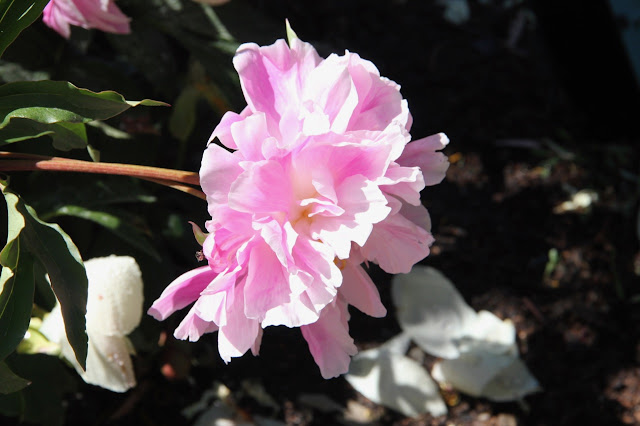 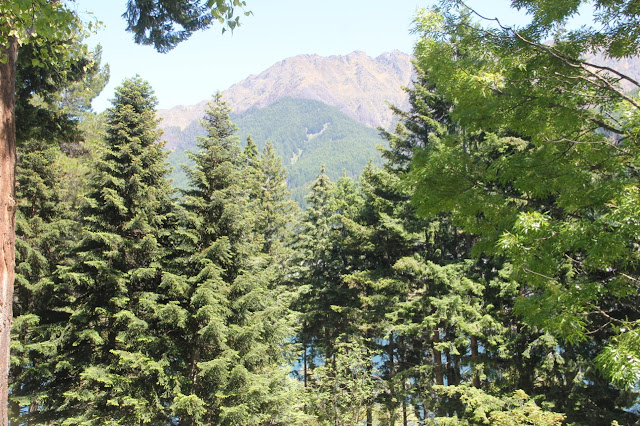 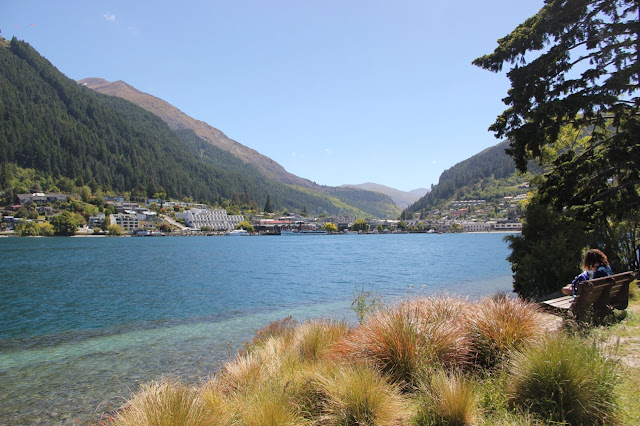 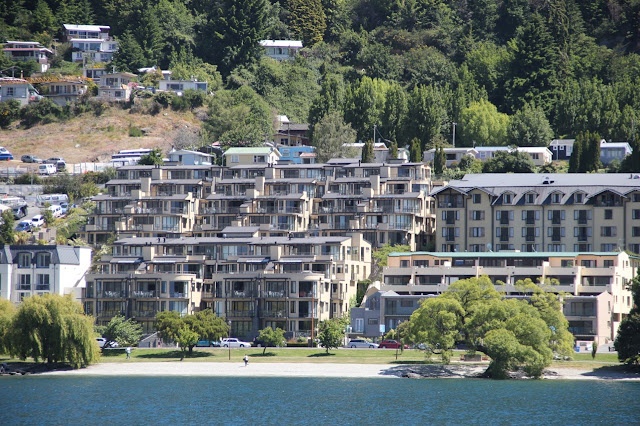 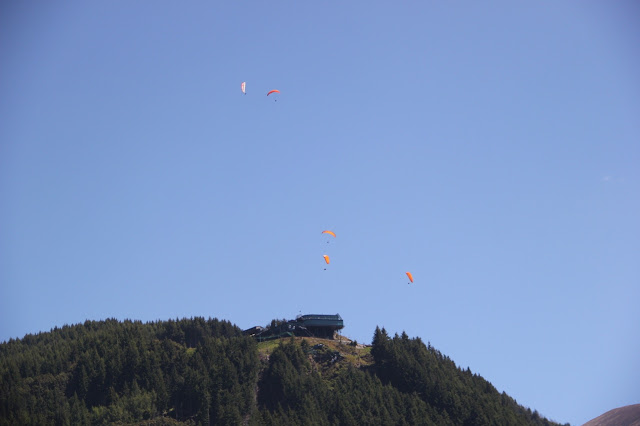 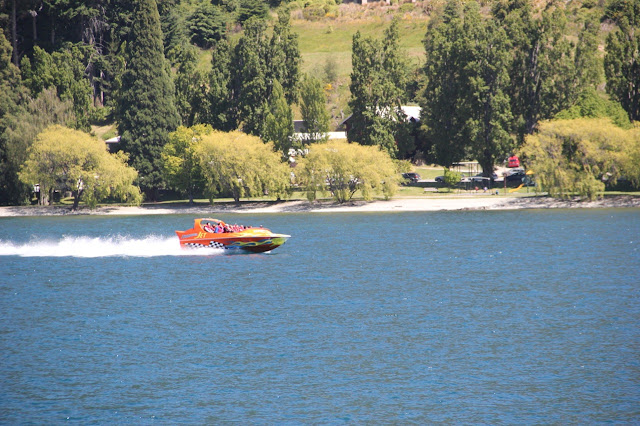 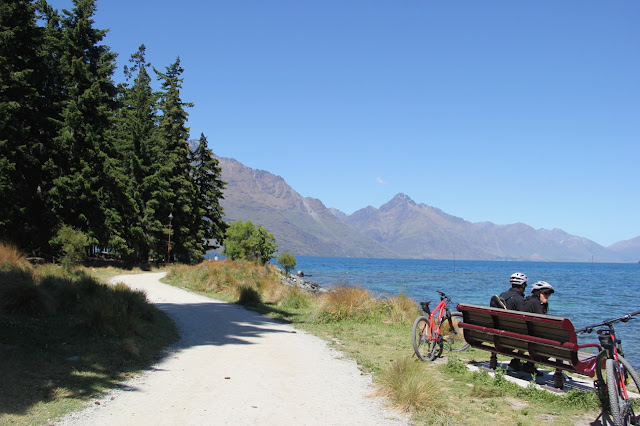 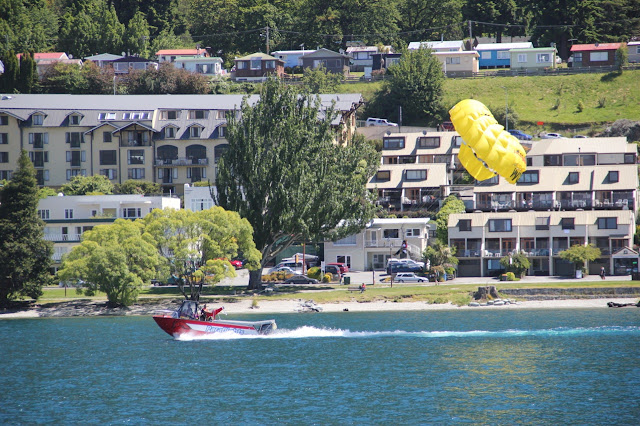 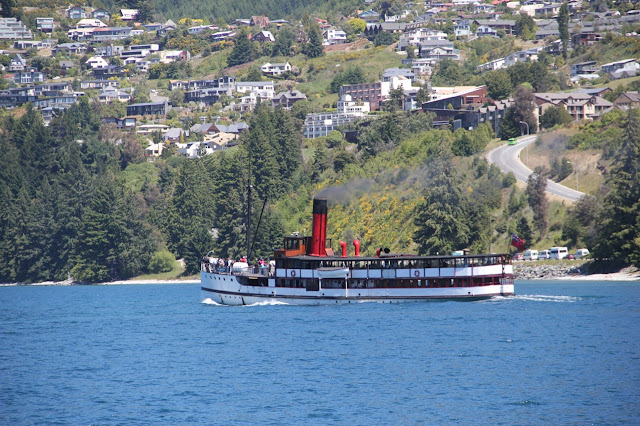 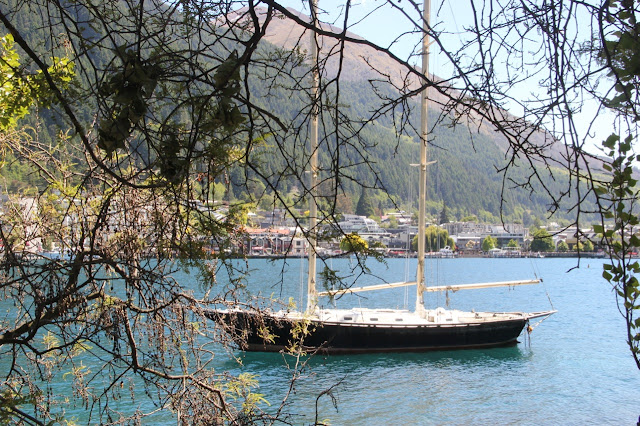 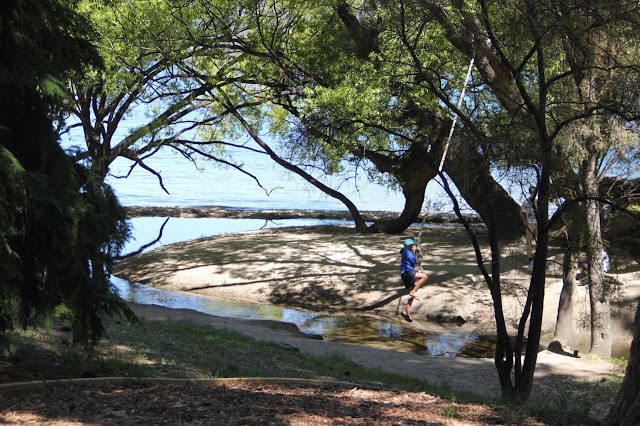 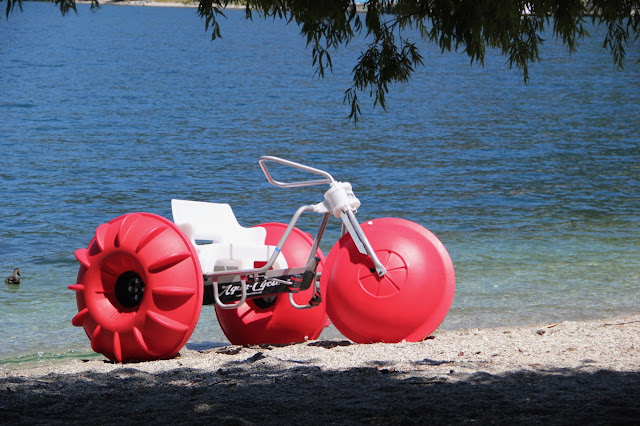 Back in town, I craved for a burger for lunch and wanted to try Fergburger , one of the most popular burger place in QT. But this place is always crowded and has a really long queue. So, I decided to google up other burger places and found Devil’s Burger around the corner which had the same two veg options that Ferburger offered for a little less. I enjoyed my meal before heading to the lake. 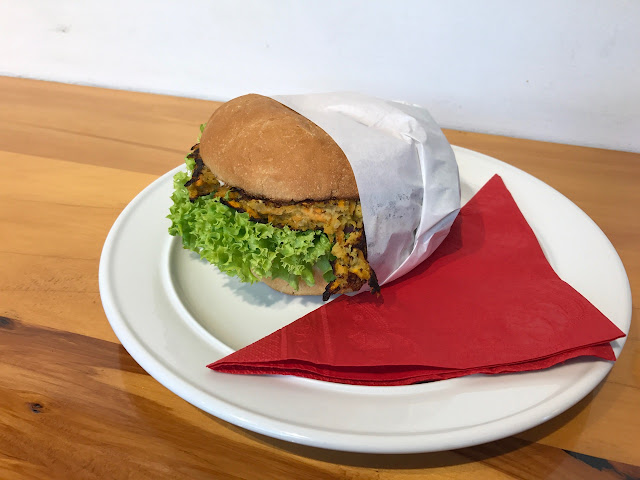 I sat by the lake observing everything that was happening. I think it was at that very moment that it happened to me. Thinking about all that excitement and planning I had just done for the next few days, I felt a sudden rush of amusement run through me. As I sat there observing everything that was happening around me, I felt like I was completely in that particular moment, away from everything I knew. Just sitting there, observing what is happening right in front of me and thinking of nothing else. That feeling of a free mind, I imagine would be something similar to a birds flight in the blue skies. 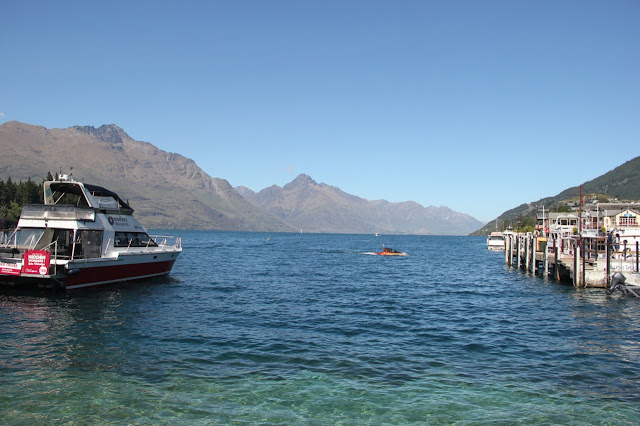 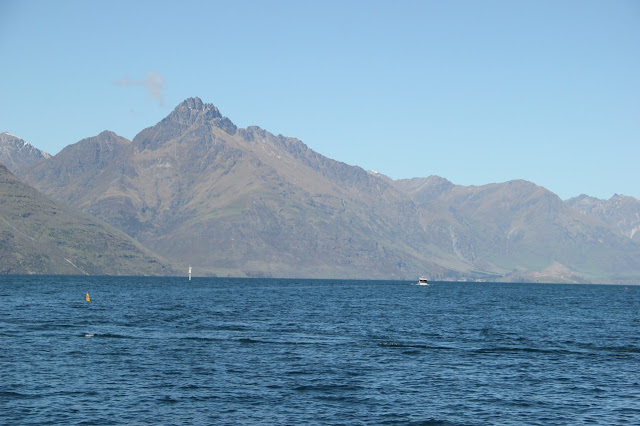 I also remember thinking of how every country is different and I could not compare my backpacking in Sri Lanka with that in NZ. They are two countries of separate culture, different kinds of people, dissimilar ways of life and they are bound to be distinct experiences and that difference is what makes my travels interesting. As I get adapt to the rules of the country, I learn how I can mould myself to different situations. In Sri Lanka, I did no prior planning but in NZ, specially during summer,  it definitely helps do some amount of planning, at least a day or two in advance. Adapting to the country and its life style is what makes traveling so interesting and sometimes adventurous.

At the lake, that evening we had an unexpected street performance by a Swedish artist. He was basically juggling a few objects but what was more impressive was the way he had staged the whole thing into a very funny and hilarious drama. He was very witty and he masterfully involved the audience in his act. I cannot go into the details of the act but all I can tell you is that I did not stop laughing even for once during this entire act of about 30 minutes. 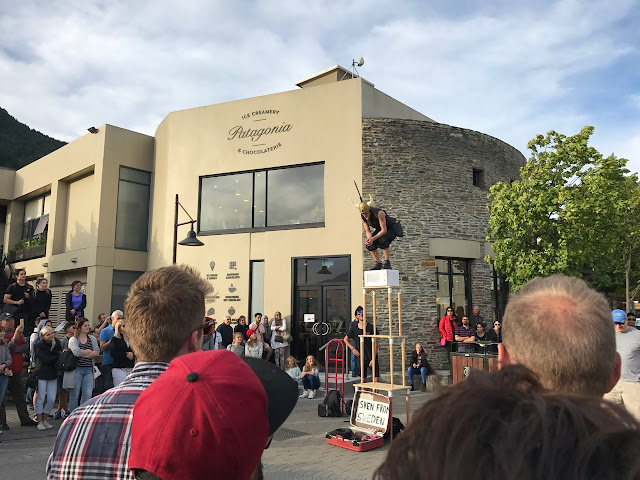 I wanted to try Mexican food for dinner so I found this really nice Mexican restaurant with friendly staff very close to the lake. Unfortunately they had no place. So, I packed my Burrito and ate it by the lake. Many were doing that anyways. Some had brought beer crates, a stereo and settled there watching the sun go down. The seagulls hovered over the heads of those who carried food.  Another interesting thing to notice here is that the bank of the lake had a feel of a shore. The waves roared as they hit the land. 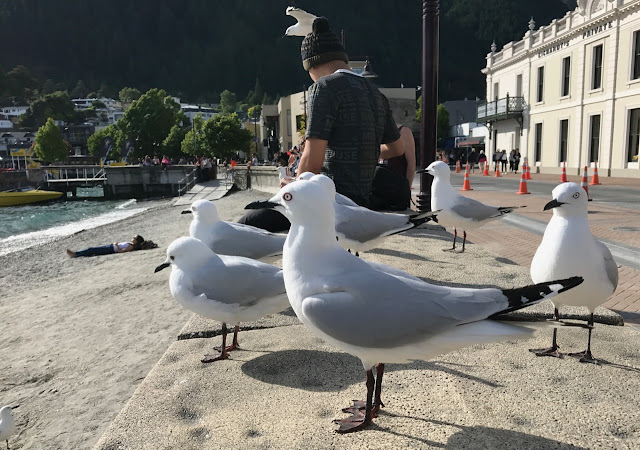 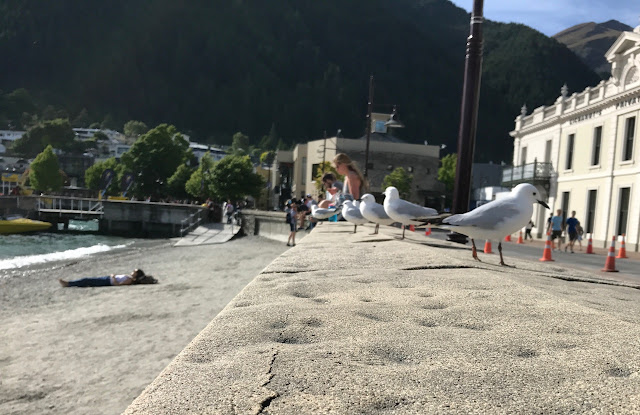 As it got dark, reflection of the lights from all the buildings by the lake seemed to dance with the waves. It was getting extremely cold, so, I decided to head back to the hostel and rest. A big day was soon to arrive. I think, this day, I spent most of the time by the Wakatipu lake. It truly was very peaceful there. 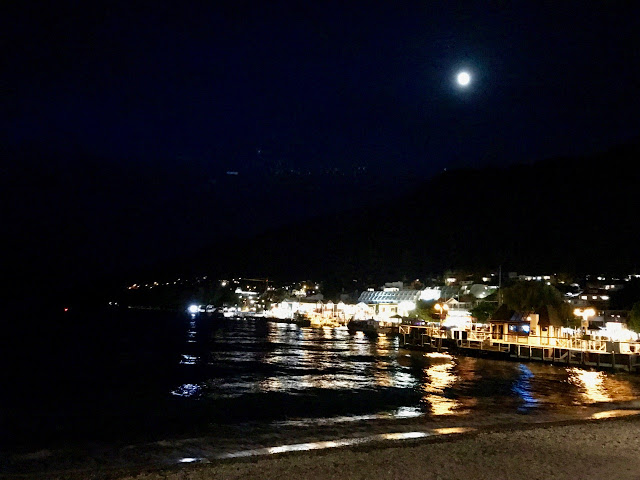