I was the first one to wake up, at around 6 AM. Outside, it was drizzling. Cloud and mist were slowly filling the valley. 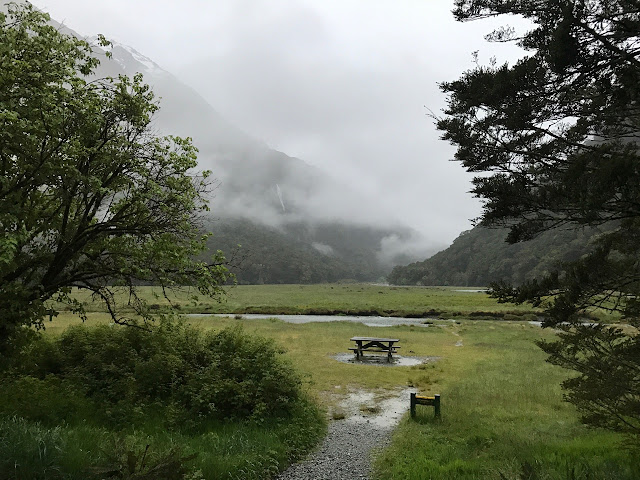 By the time I finished packing some bread and cheese for lunch and had some for breakfast, one by one, others woke up. Julie wanted to wait until the weather report came in at 8:30 AM but I wanted to leave early because, considering my slow speed, I knew I would take more time on this long trek.

I pulled out my water proof jacket, pants and covered my bag with rain covers. The Belgian old lady asked me if I had also covered everything inside my bag with a water proof cover. I do not know why I nodded despite not having done that. All geared up for a walk in the rain, I left the hut at 7:40 AM.

2.3km hike up to Routeburn Falls hut is a bit steep and is probably the most toughest climb of the entire trek. Well, I did not feel it was too tedious but it was relatively challenging as compared to the previous days walk. I took my time to stop  and watch the game of hide and seek between the clouds and the mountains. 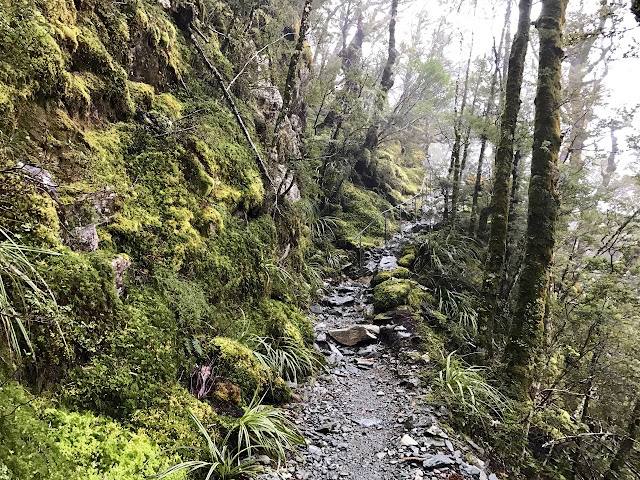 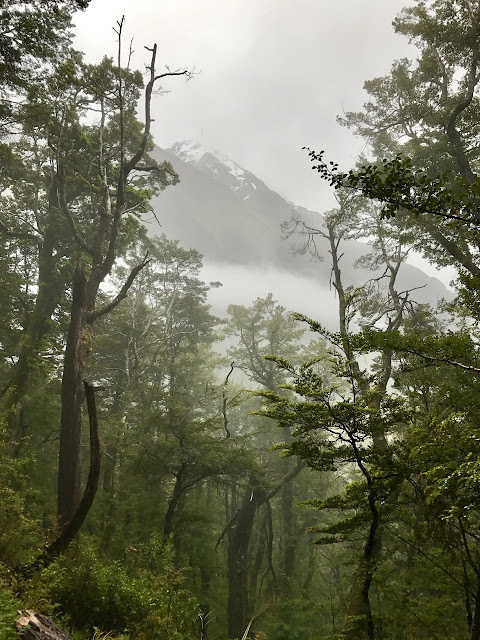 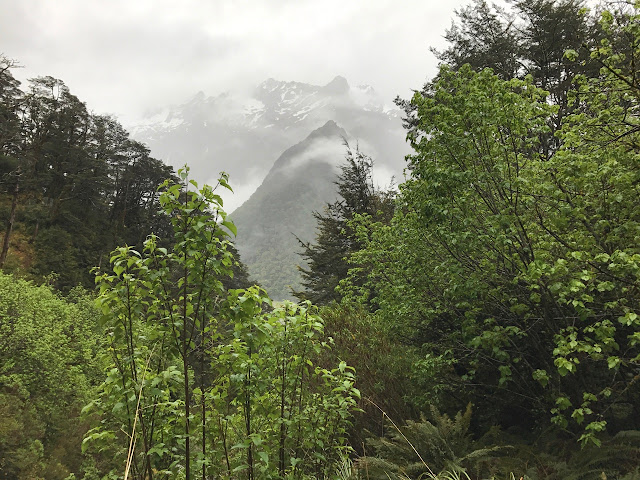 Along the way, I imagined how the Māoris or the Britishers would have traveled here, perhaps on foot or on horses. I remembered some similar visuals from the movie Cold mountain.

By 9AM, I was at Falls hut. I spoke to the warden who by then had received the weather report. He told me that it was going to be cloudy all day and since there was no wind it was highly unlikely that the cloud would clear later in the day. I was slightly disappointed but I remembered how the warden at Flats had joked about it - Everyone has pictures of the mountains in clear blue skies, who needs them, you guys are gonna see something new. 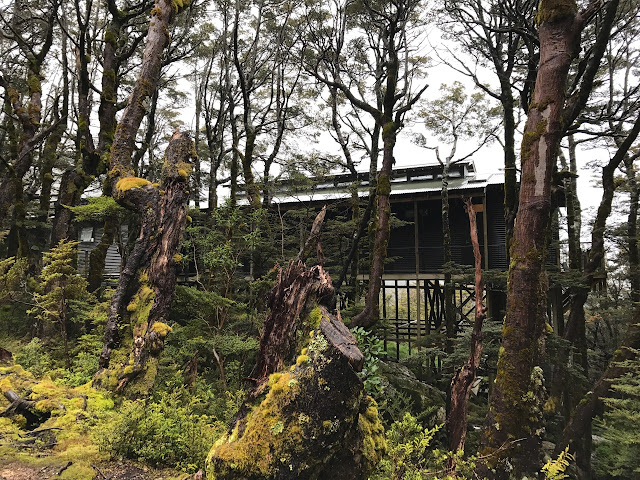 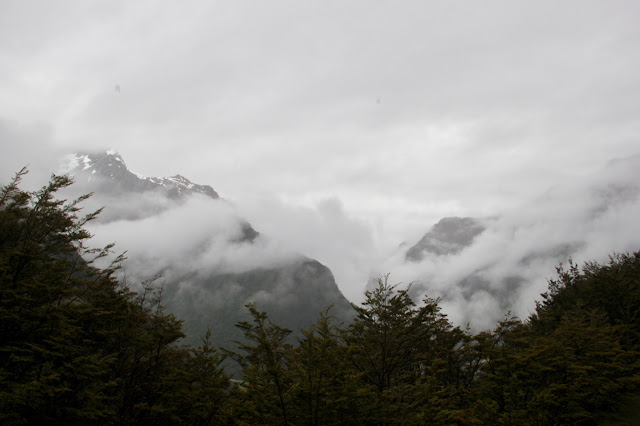 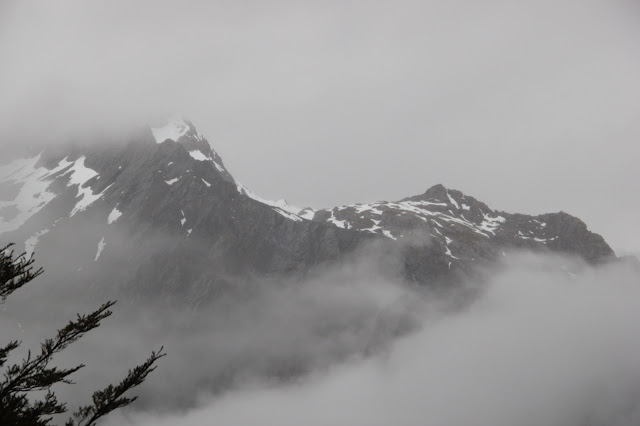 After spending almost 50 minutes at the Flats hut, I set off on my next leg of journey to Harry’s saddle, the highest point of this trek. On my way up, I saw these green stones. 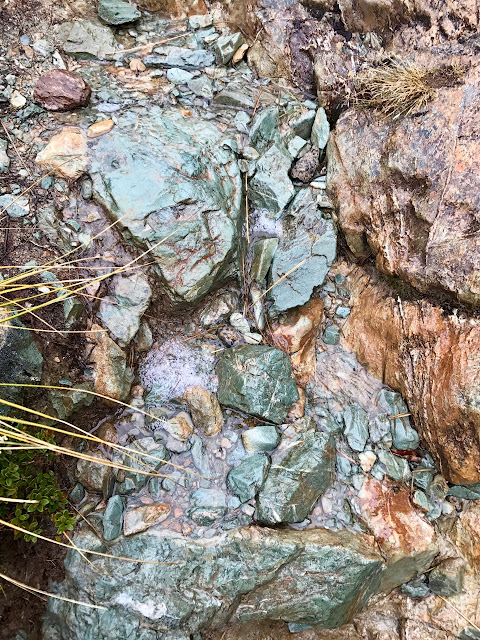 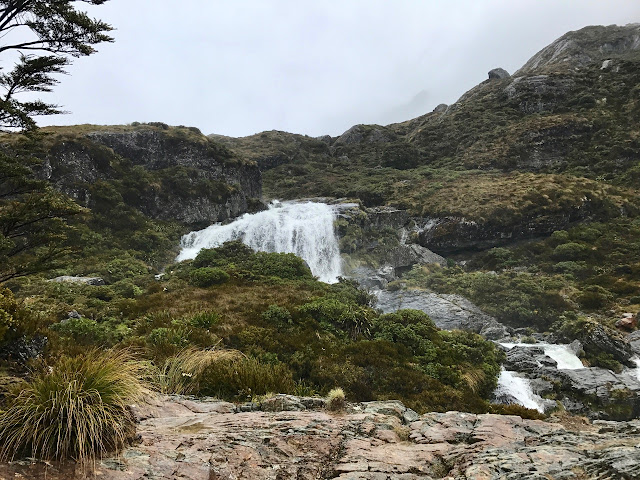 The first human traffic in the Routeburn area (around 1500AD) is believed to have been local Maori on the pursuit of their precious Pounamu (New Zealand Greenstone or Jade). The Routeburn itself didn't contain large quantities of Greenstone, but was used by Maori as a passage between two of their main sources, the Dart Valley and the Arahura River on the West Coast.

David McKellar and George Gunn were the first Europeans to map the area whilst searching for grazing land in 1861. Gold was discovered and so the government investigated establishing a port on the West Coast and a track up the Routeburn Valley over the Harris Saddle to the Hollyford Valley with the intention of transporting gold overseas. Work was started on the track but abandoned in 1870. However the Routeburn did become the link between those families who had settled in the Hollyford Valley and the Wakatipu, which was a thriving commercial centre.

The first sightseers from Queenstown up the Routeburn Valley were in the 1880s. The NZ Government Department of Tourism was set up in the early 1900s, and work on the Routeburn Track restarted. In 1912 a direct route from the saddle to Lake Howden was investigated, which led to the discovery of Lake Mackenzie. Construction of the track began, but tools were downed with the outbreak of World War 1 and this section was not completed until the late 1930s.

On this stretch, I was walking with a very sweet Malaysian family. I later learnt that the boy and his wife lived in Australia and the girl’s parents and siblings lived in Dunedin, NZ. So they had planned this trek during their vacation to NZ. The girls’ father and her brother both had the same Quechua jacket as mine. We joked about it by complimenting each other for having a nice jacket. Even the French traveller I had met at Christchurch had the same brand. Seems like a popular one.

Despite the rain, I got some great views of the mountains as the clouds slowly moved uncovering the landscape beyond. 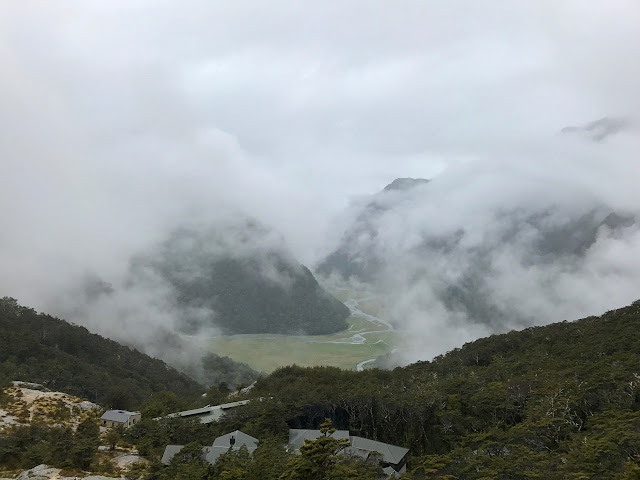 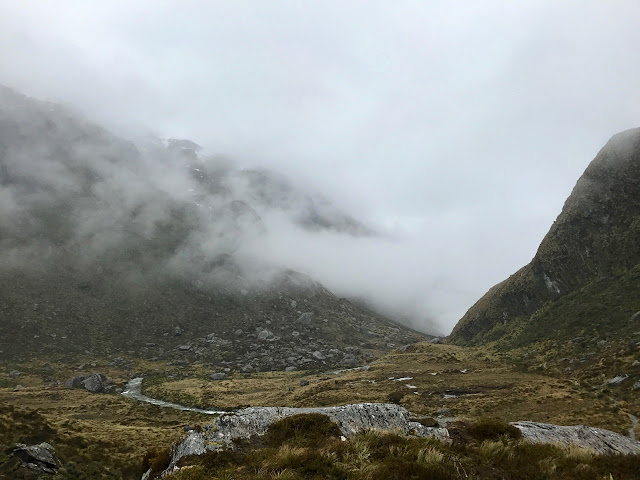 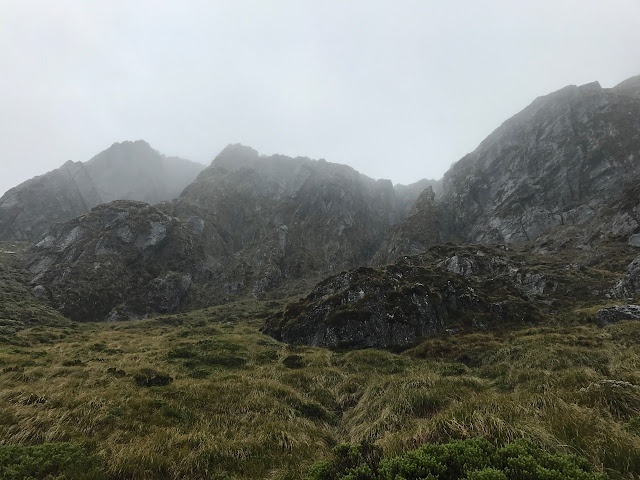 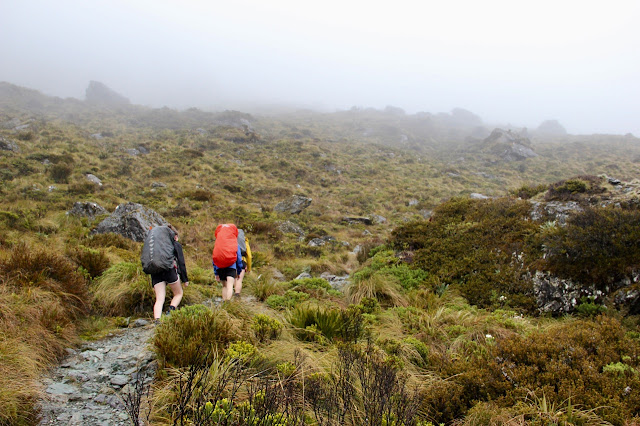 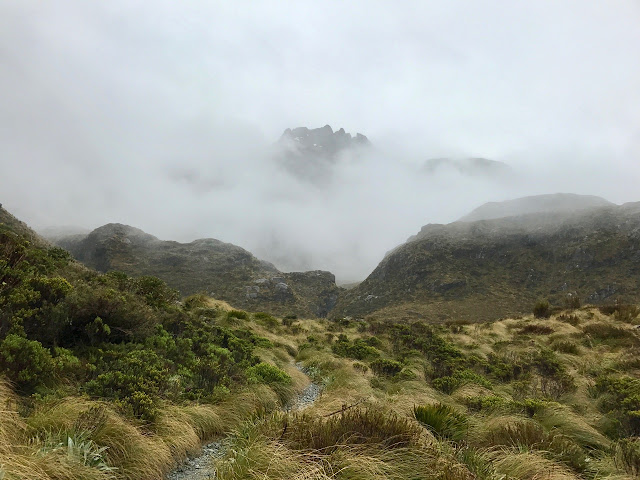 All along the track there are some blue or pink arrows with numberings. They are basically pointing towards traps. The population of Weasels, Ferrets and Stoats that are a threat to the birds are being controlled. They were introduced to the island due to the growing number of rabbits.

Green and purple stones were all through the track and I was really surprised to see the colours. I grabbed a few for my collection.  Also stunning were the alpine plants and flowers. 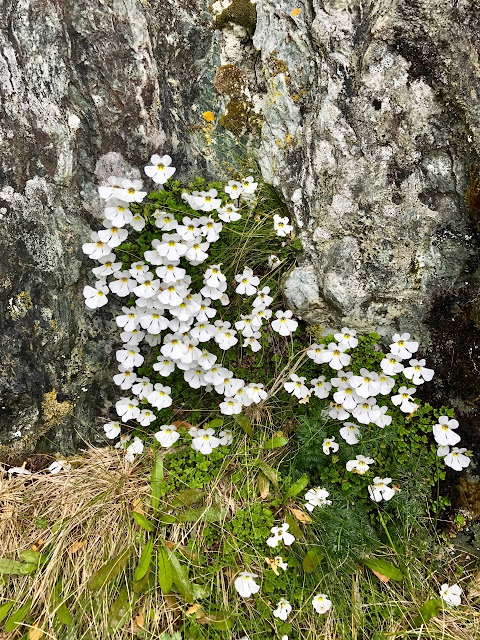 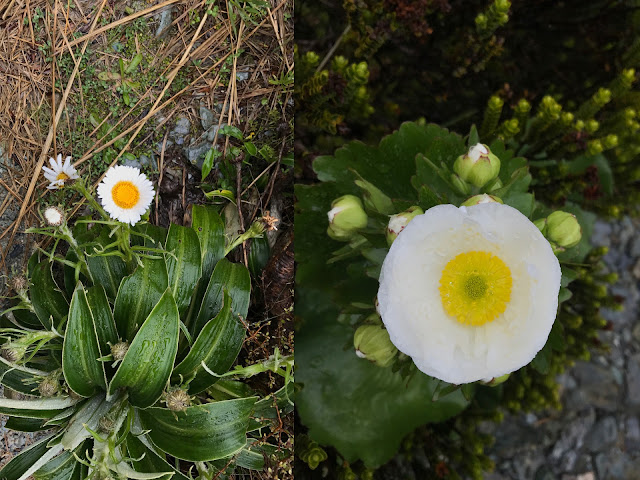 At one point, while clicking pictures, I dropped my iPhone 7 into water. Quickly removed it fearing a damage. But thankfully, the latest iPhone is waterproof.

It was drizzling all through the trek and my waterproof gears saved my life. I was happy that I had decided to carry them from Bangalore. I reached Harry’s saddle, the highest point (1300 mt/ 4300 ft) in the trek at around 12:20 PM. 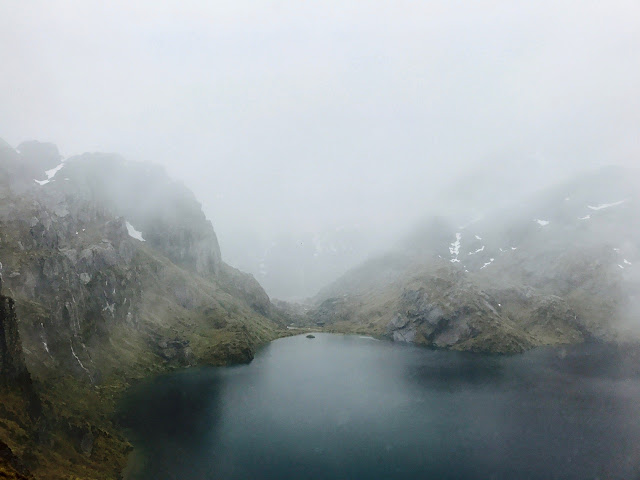 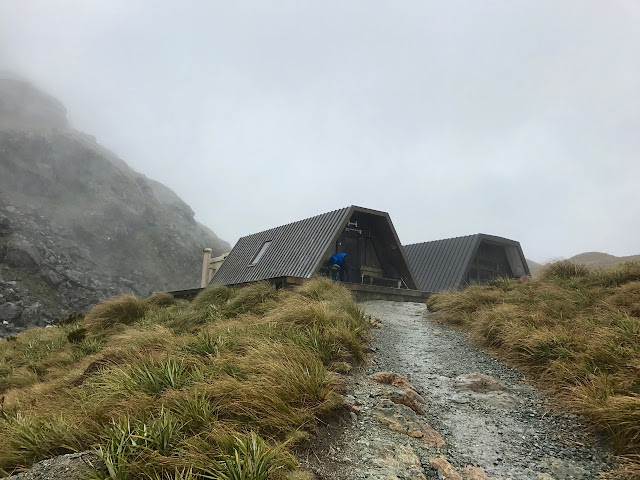 There is a hut that has wooden bench along the four walls. People had occupied the available space to prepare their lunch. As I munched bread and cheese again, I saw people prepare burritos, heat some water to prepare tea. No wonder their bags were that big, I thought again. I met this old couple who were in the same van that dropped me at Routeburn Shelter parking. I was surprised to see them so fit and active at this age. They were faster than me, a man perhaps half their age. More than feeling bad for myself, I felt inspired.

Soon after my lunch, at around 12:55 PM, I began my journey downhill to Lake Mackenzie. This stretch was a disappointment as on my right, was probably a beautiful valley but all I could see was clouds. Nothing was visible. 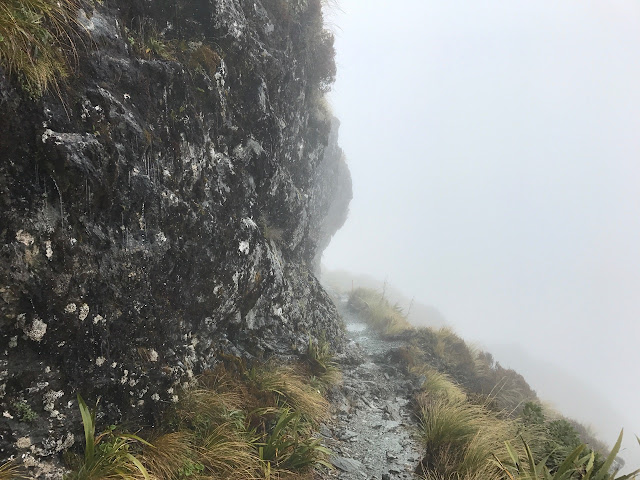 But as I descended into the forest, I was taken aback by the views. Moss covered trees and rocks created a magical setup that resembled a fantasy movie set. 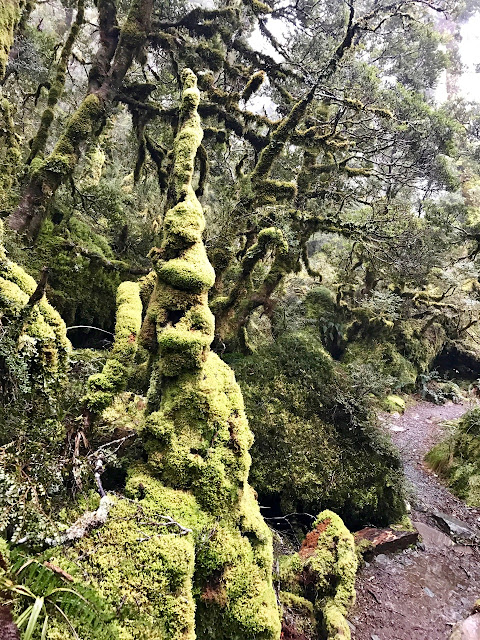 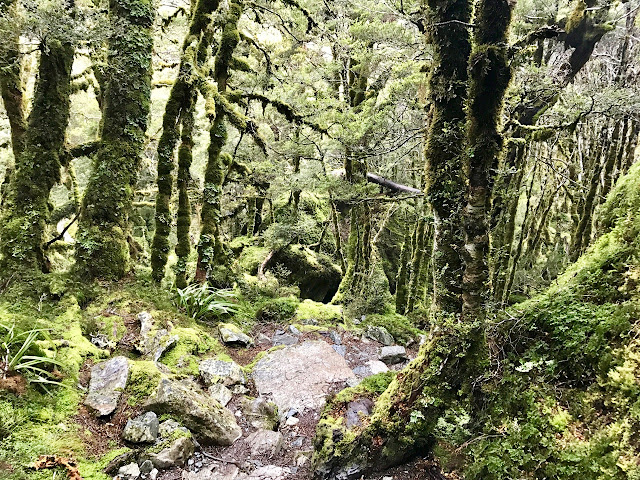 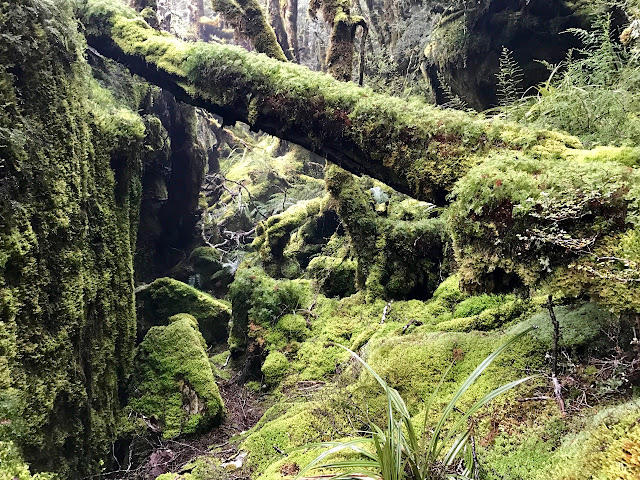 After what seemed like a long walk, I reached Hut Mackenzie at around 4:15 PM.

The hut is located by the lake Mackenzie. It is a beautiful place. I saw a rabbit run into the bushes here. That was the first animal I had seen in the forest. I wondered why there were no wild animals in such a dense forest. Not even snakes. That surprised me. 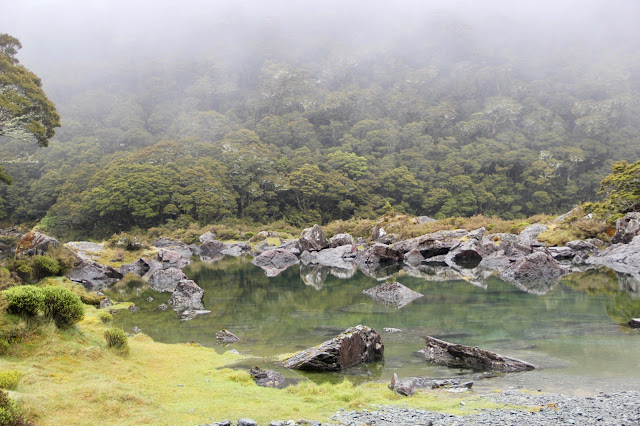 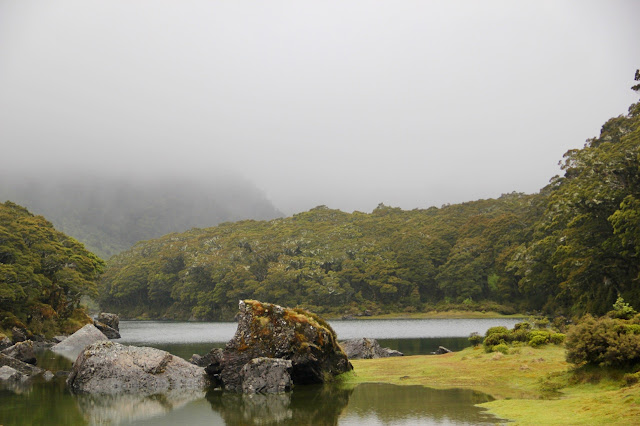 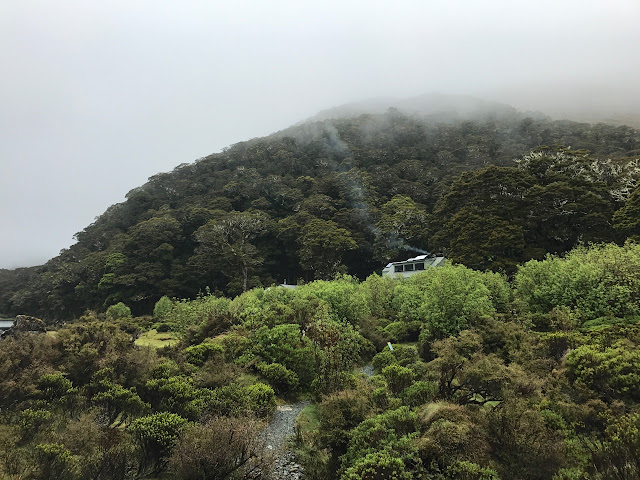 I sat outside the hut talking to the Malaysian guy and that is when he told me where they were from and their plans of heading to Malaysia for Christmas. I also met the Belgian couple who were waiting for the girls parents to arrive. They were planning to camp that night as otherwise all the pain they took to carry the tent would be pointless.

The next 8.6km walk from Lake Mackenzie to Hut Howden seemed the longest walk of this day. I remembered what Julie had told me the day before. "It is going to be a long walk but finally you will be so happy to see the hut." I was mostly alone on this track. 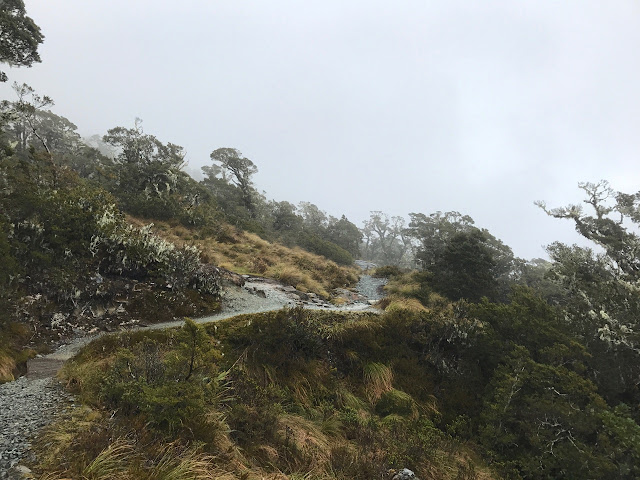 However, the best part of the trek was when I arrived at this gigantic waterfall called Earland falls. Water ferociously dropped from a great height, hit the rocks below and splashed the water droplets as far as it could. To my shock, the trail was leading me almost into the waterfall. I  must admit that I was scared. The ferocity in which it fell and the roaring sound it created, overpowered all my senses. The track took me very close to the waterfall and then deviated away. By the time I crossed it, I was completely drenched. 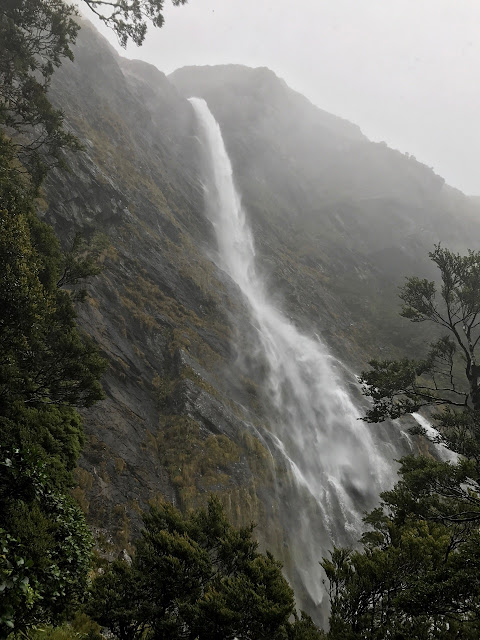 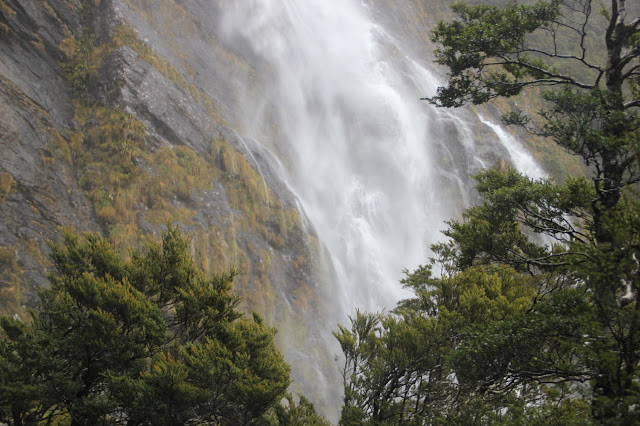 Thrilled by this walk across the waterfall, I threw my bags and headed back to the waterfall to experience the same feeling of fear and excitement. I stood there, facing Earland falls for about thirty seconds before I gave up. But those few seconds that I spent there facing it was one the best moments of this trek. I was drenched but it felt awesome!

I was the last to reach hut Howden at around 7:30 PM. As Julie had said, I was glad to finally reach the hut. 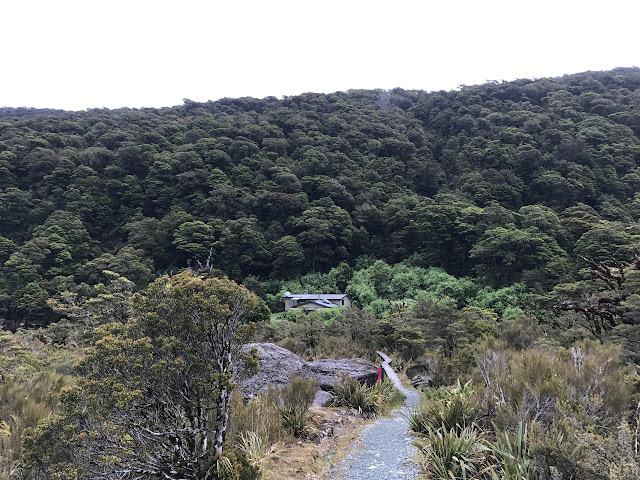 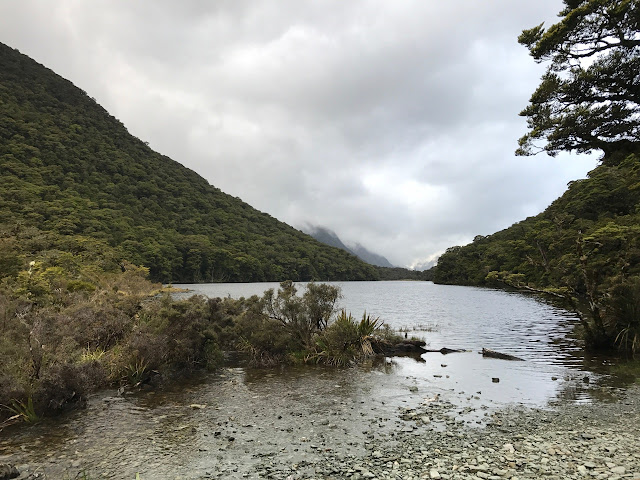 Inside the hut, the warden was briefing everyone else. Julie had arrived an hour earlier. She probably overtook me when I was at Routeburn Flat hut speaking to the warden. Hence, I never met her on the way.

I spoke to Mandy, an American girl who is doing a couple of treks in the country. After dinner, I wrote my diary and at 10PM, when the electricity (Solar power) was cut off, I headed to bed for a much needed rest after that long walk of 22 kms. What an incredible day this had been. A memorable one to cherish for a lifetime.