When I woke up next morning, I witnessed one of the most beautiful sights that I have ever seen. The morning sun was playing a game of light and shadows with the snow capped mountains. 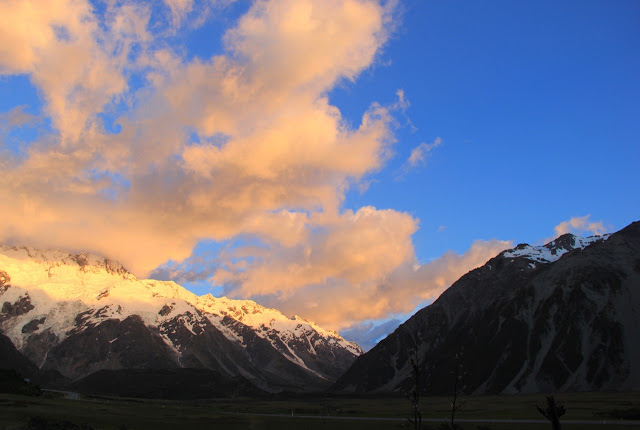 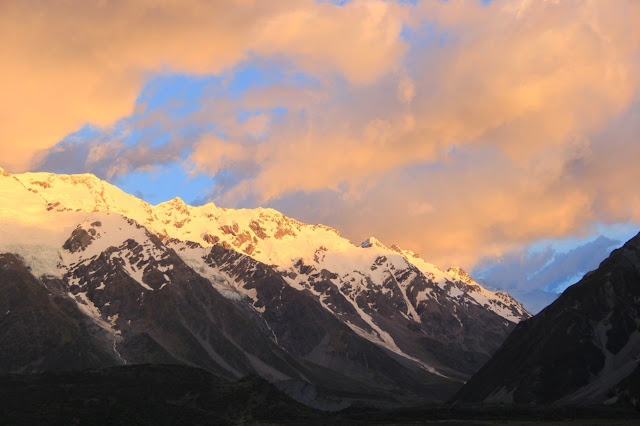 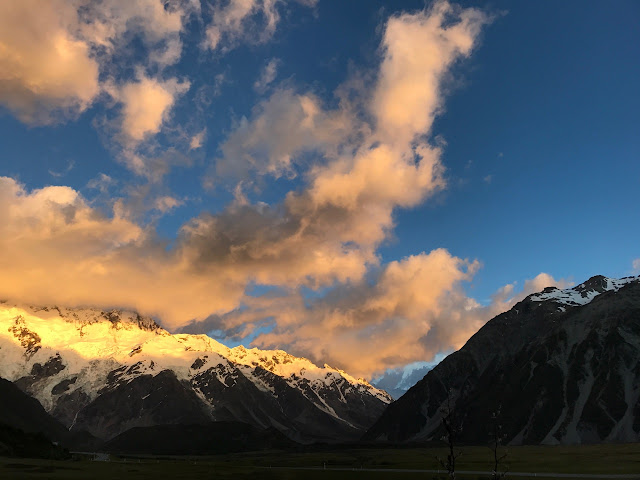 I got ready and left on my first trek for the day - Red Tarns (2hrs return, 300mt height gain). The trail starts behind the motel so it was easy to get there. Again, I was all alone along this trek and the views were stupendous. Occasionally as the clouds cleared, I got a glimpse of Mt Cook, Standing tall. 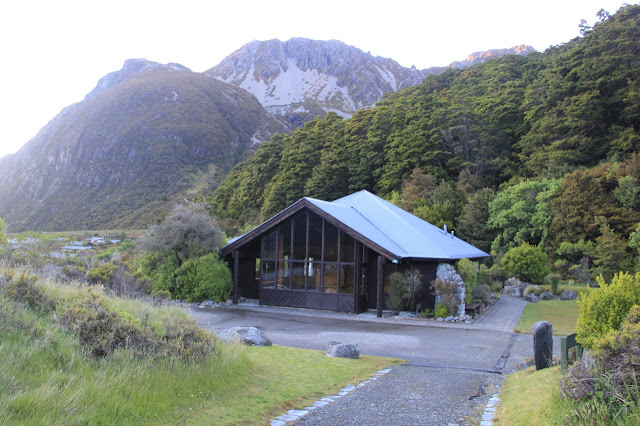 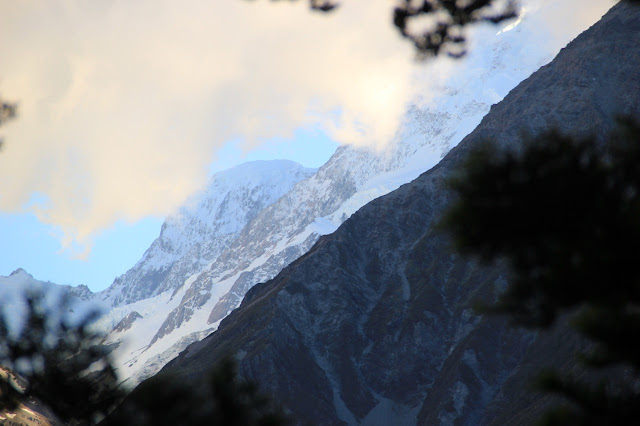 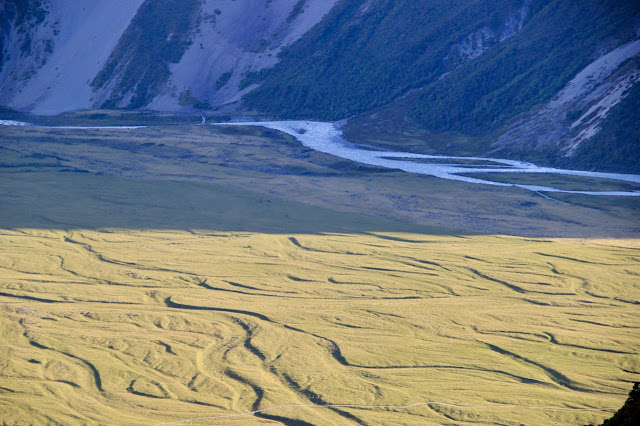 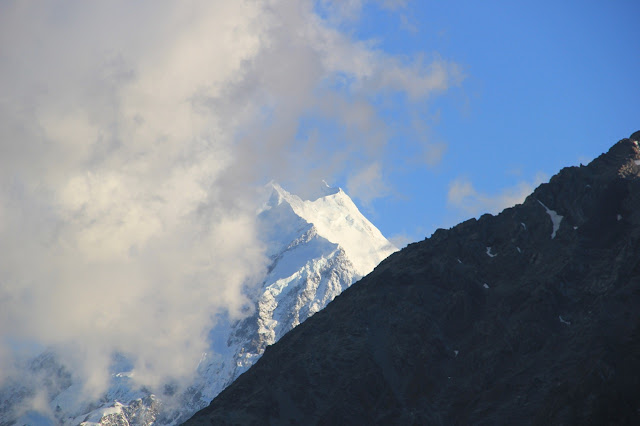 At the end of red tarn trail, is a lovely little lake. To be alone there, midst the mountains, absorbing every bit of that beauty in silence and tranquility was an inexplicable moment of joy. 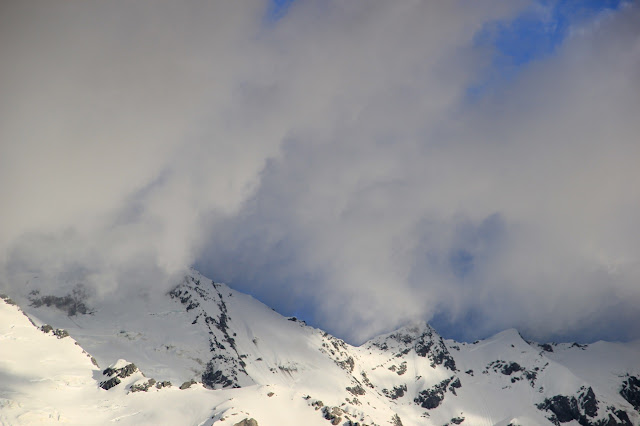 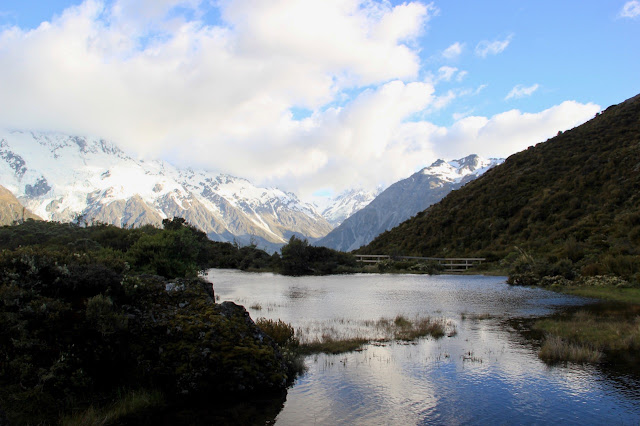 I headed back to the motel and had my morning tea. It had a lovely view from my room. 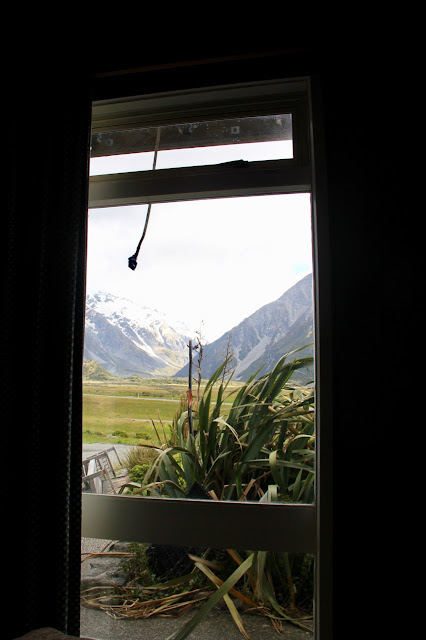 I checked out at 10 AM and moved my bags to the storage room. By then the clouds had poured into the valley and it was drizzling. Despite the weather condition, I went ahead with my plan to trek the Hooker Valley. Anyways, I had my gears to prevent me from the rains. I stopped at the museum to view some interesting displays before heading on the trail. 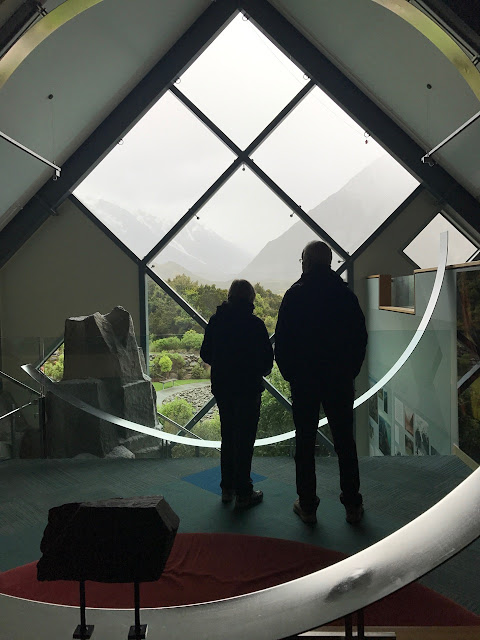 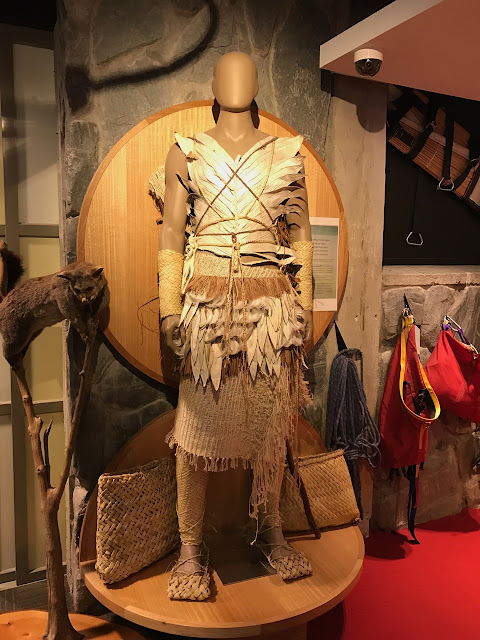 As I walked the Hooker valley trail, the clouds and the mist gave the experience a mystical touch. Hooker valley trek is very scenic and generally takes 3 hours for a return journey from the Hermitage hotel. It is about 5km walk. During my walk, the rain turned into a mild hail storm. Visibility level began to reduce drastically. 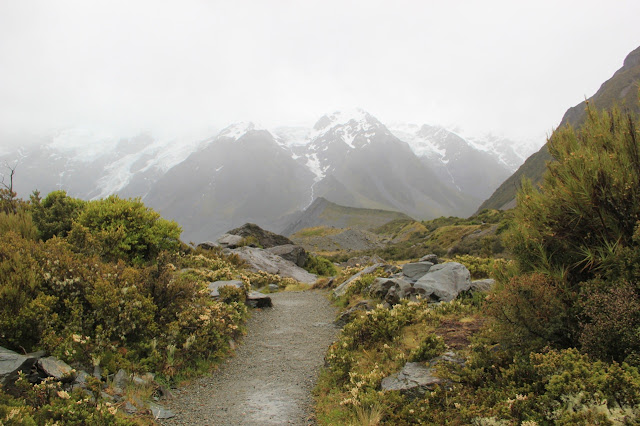 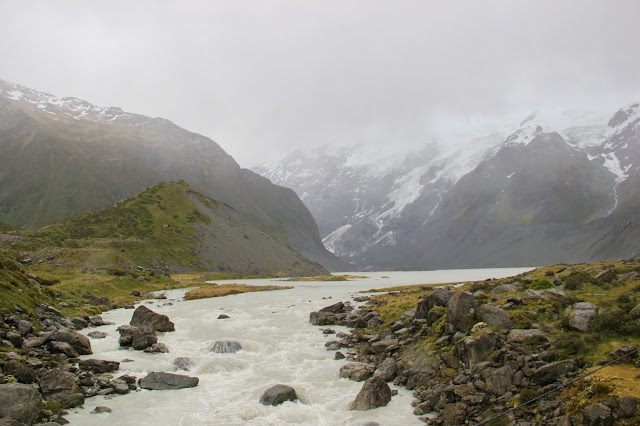 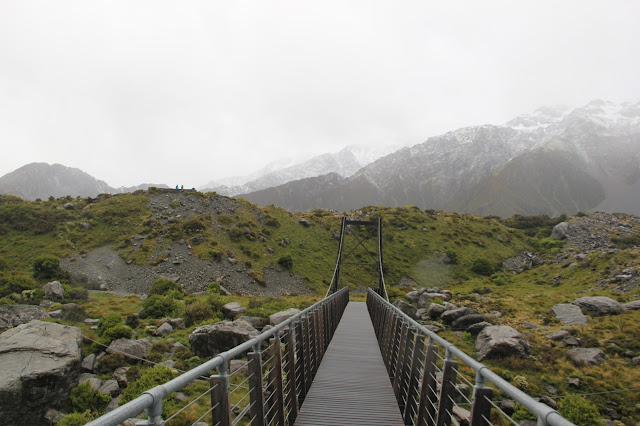 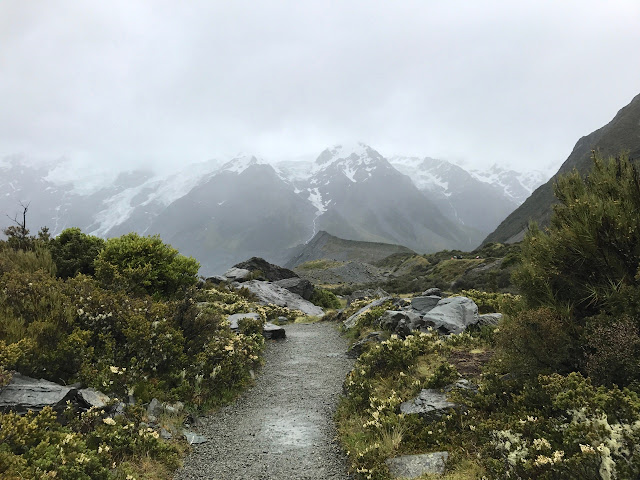 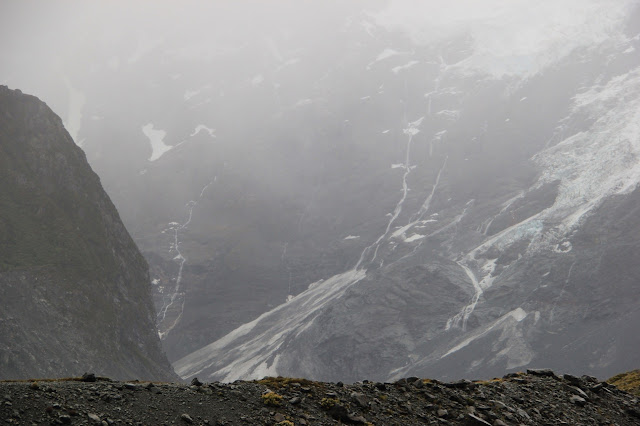 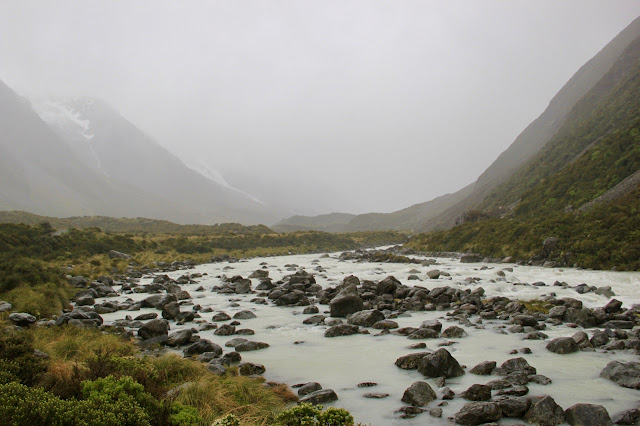 I am generally not the one to give up but considering poor visibility and my bus timing, I decided to turn back. It was pointless to continue when I could not see the mountains anymore. I had enough time to return to my motel, cook some lunch and then head back to the Hermitage hotel to catch my 2:30 pm Intercity bus.

On our way, the Pukaki lake was a major attraction; hard to be missed due to the colour of water. 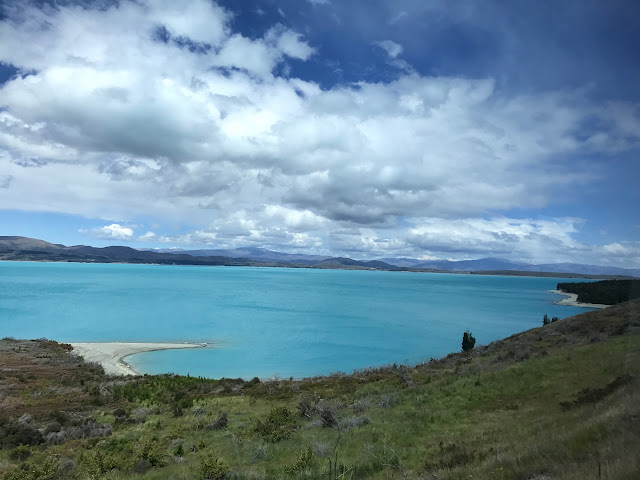 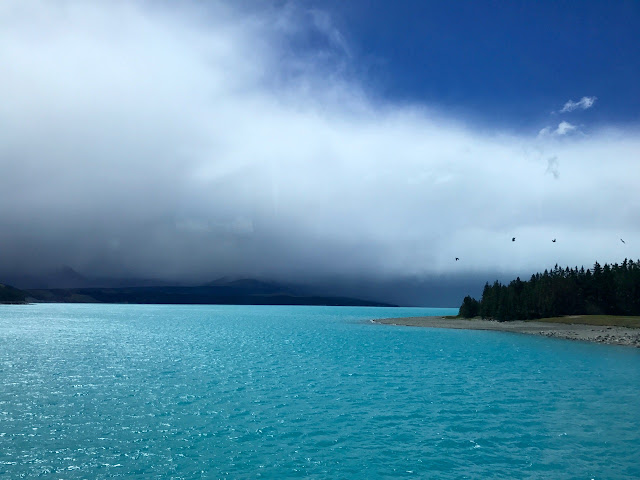 The bus drivers are really informative and they always have interesting stories to tell. Our driver educated us about the different types of sheep in New Zealand. He talked about Merino sheep from Queenstown area and English sheep found on the way to Christchurch. He also told us how silly they were in naming the MacKenzie Basin in the 1850s by and after James Mckenzie, a Scottish-origin shepherd and sheep thief.

We stopped at Lake Tekapo to view the Good Shepard church. I had missed seeing this so called iconic church on my way to Queenstown. But again, the church is no architectural wonder or anything but the pictures of Lake Tekapo night sky by the church makes a great shot and thus it is popular. 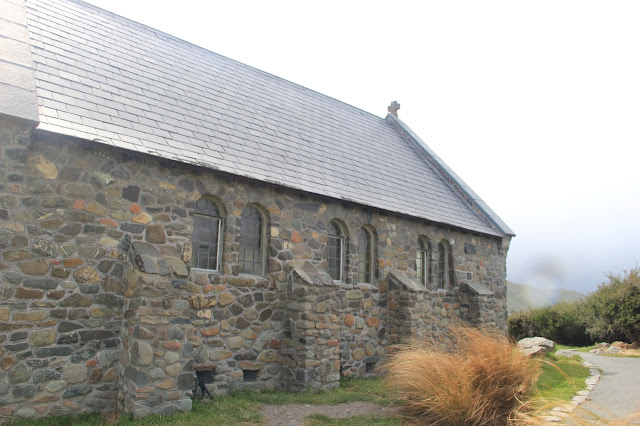 We stopped at Geraldine again and I had some tea and Shortbread. I have got hooked to this delicacy called Shortbread. I tend to buy them in every café I stop at. Most of these guided tour buses have Chinese tourists. They usually travel in a large group and they continuously head from one place to another, eventually covering the entire country.

As we approached Christchurch, mountains gave way to plains. I enjoy observing the farms. It always is interesting to note what man can do with a piece of land. I was also eager to view the modern farm tools and equipments used here as compared to the traditional tools still being widely used in my country.

I reached Christchurch at around 8 PM and checked in at YHA. I had walked around Christchurch when I had arrived to NZ, So, I really did not feel like going except for buying some grocery. After dinner, tired that I was, I straight away headed to bed. 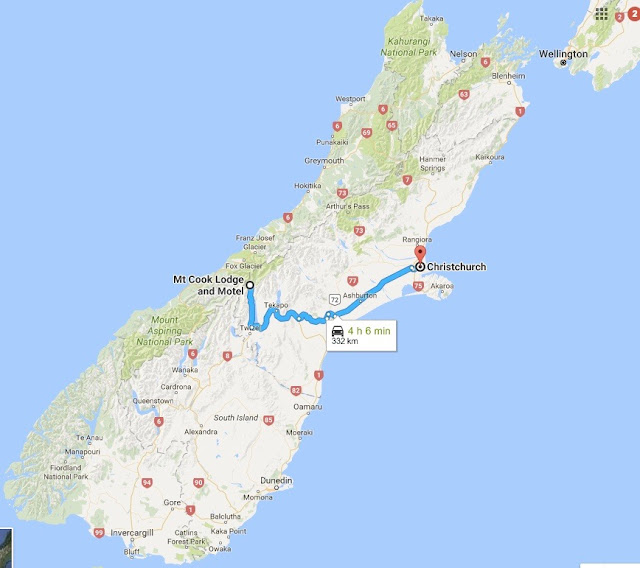