Early in the morning, I walked to the the bus station. I had booked a bus through Ouibus travels. It was a long walk to the bus station and my bag being heavy already, made it tiring. I sat at the bus station and began continuing the sketch I had started at the Calanque de Sugiton. With my sketching book and pen, I seldom feel lonely or bored. There is always a better way of making use of free time. 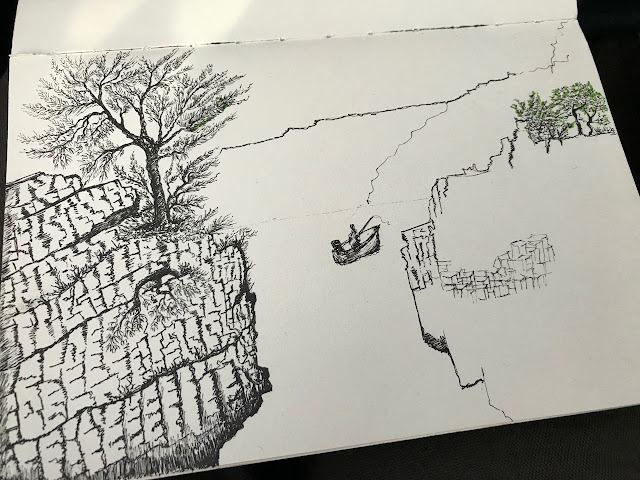 The bus was right on time. The driver was very friendly and he let all of us in after checking our tickets. Funny safety messages set the mood for the journey. I always enjoy watching the landscape while driving past the countryside. With some music on, I enjoyed the views. 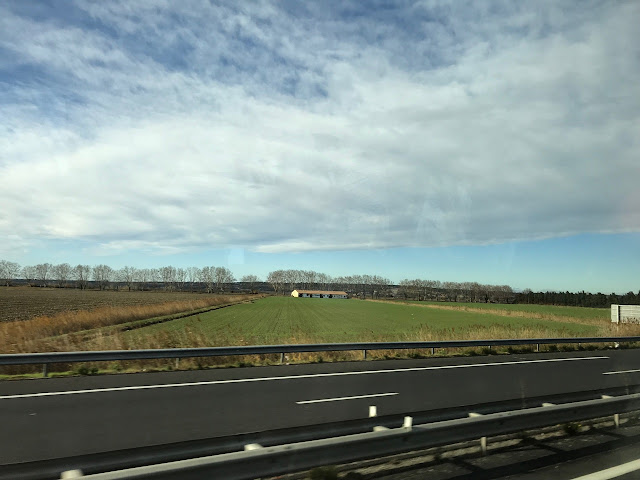 At Montpellier, the bus stopped about 3kms away from the town center. At the tram station, I bought a ticket from the machine and rode a blue tram to the city. My hostel - Jimmy’s Backpacker was behind the main railway station. When I reached the place, I saw no board and the location seemed residential. I was a bit confused. Observing the labels on the building entrance,  I learnt that the hostel was on the first floor of the building. I pressed the buzzer against the label and someone opened the door for me. I entered in. It was a beautiful old building and I was already happy about my choice. 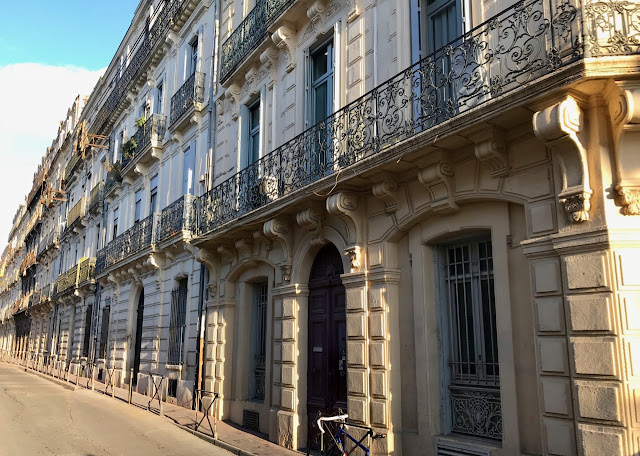 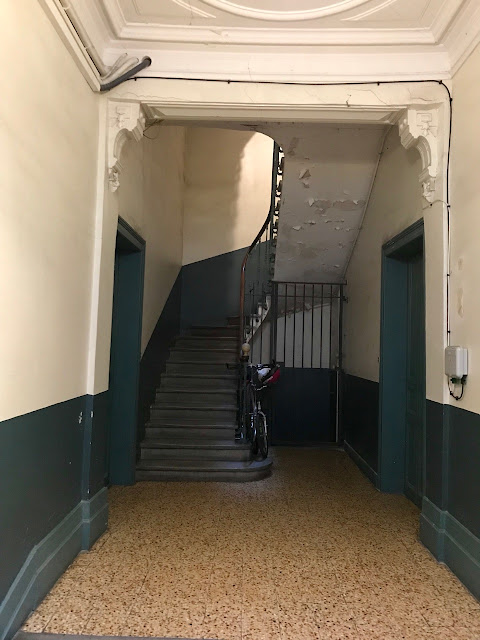 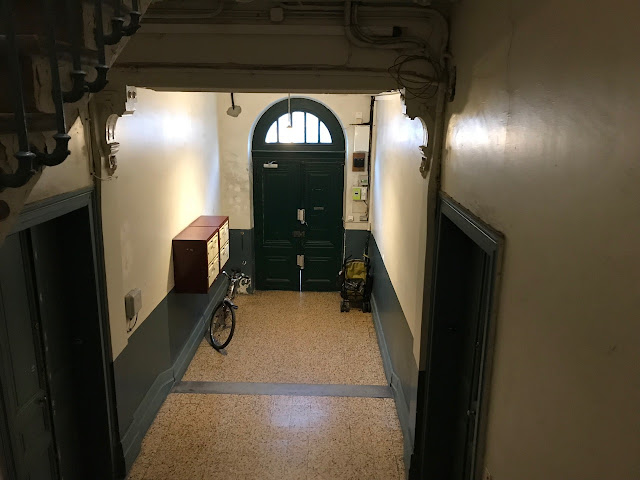 Vélario, the caretaker greeted me from the first floor. He is basically an Italian and works as a chef in a restaurant. He also takes care of his Korean friend/Boss’s apartment turned hostel. This was a two bedroom house turned into a hostel. I took an instant liking for this place. The windows opened to the street and there was a small balcony. I reckon this to be a very old building where many families have lived. On the other side of the street is the railway station. Unlike in Indian, the trains made no noise at all. 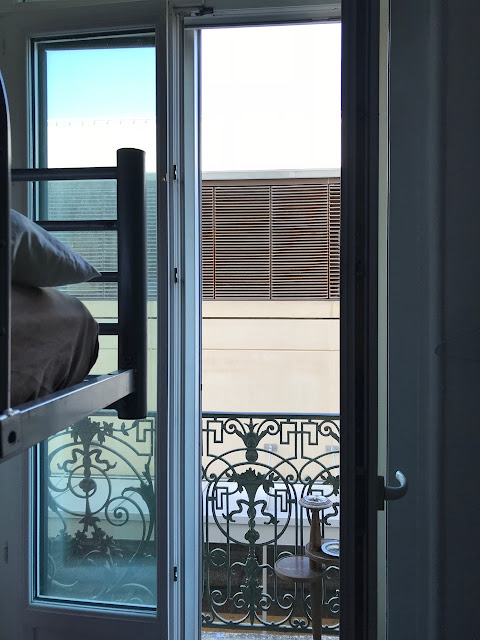 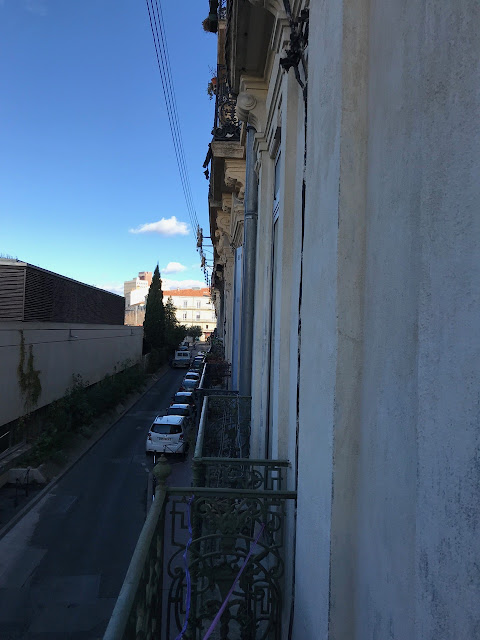 When I learnt that Vélario is a chef, I told him that I loved Italian food; specially pasta. He quickly offered to cook for me that evening. He told me that we could go buy some stuff from the grocery store. I happily agreed though, I was not sure if he really meant it.

I had googled this really nice vegan restaurant called Joy Healthy Food and so, decided to go there for lunch. I think they were about to close but they took me in for a final order. I tried their Buddha bowl. It was really tasty. The Thai gravy and steamed vegetables tasted really good, specially the sweet potato. I tried their Fondant au chocolate for dessert. it was just irresistibly delicious. Coffee with almond milk was very tasty as well. 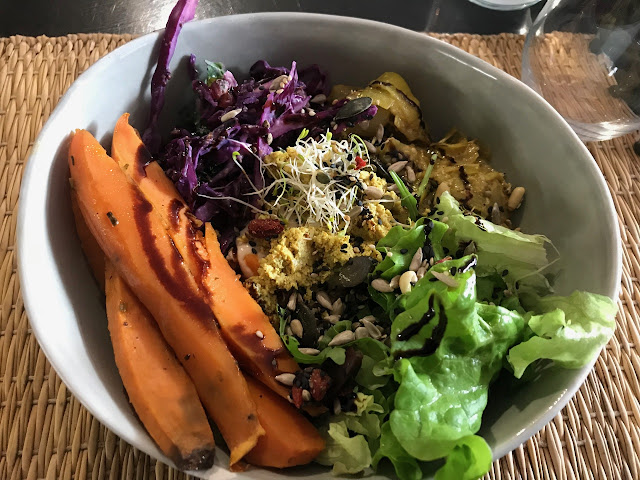 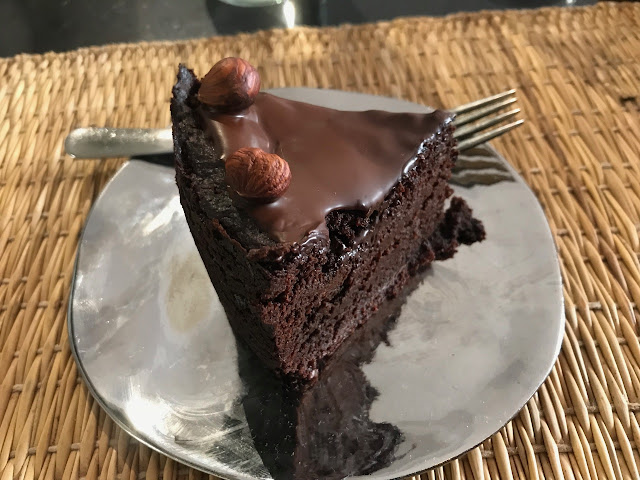 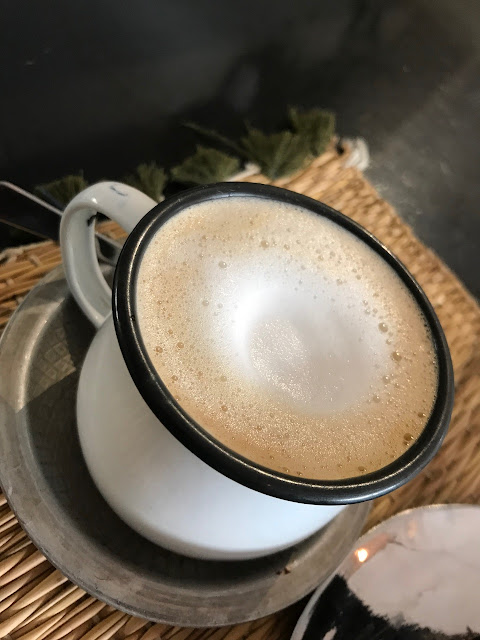 I then headed towards the post office. It was interesting to see that they had a help desk at the entrance. I believe, these are to help the old people in particular who are not accustomed to the new technology and of course for foreigners like me. I bought a few stamps and posted the cards. For me this experience of visiting the post office in a new country and figuring out how things work is very exciting. 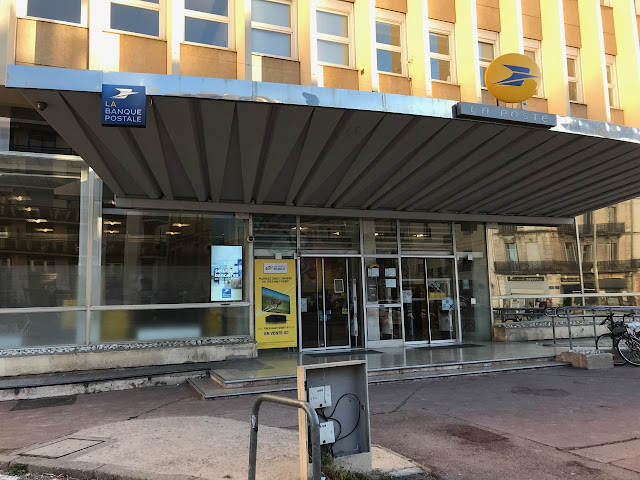 I bought some grocery before heading back to the hostel. Vélario made some expresso for me. He told me how French coffee did not taste good as compared to Italian coffee. He is really fun to talk to. I sat in the living room and completed my sketch of the Calanque. 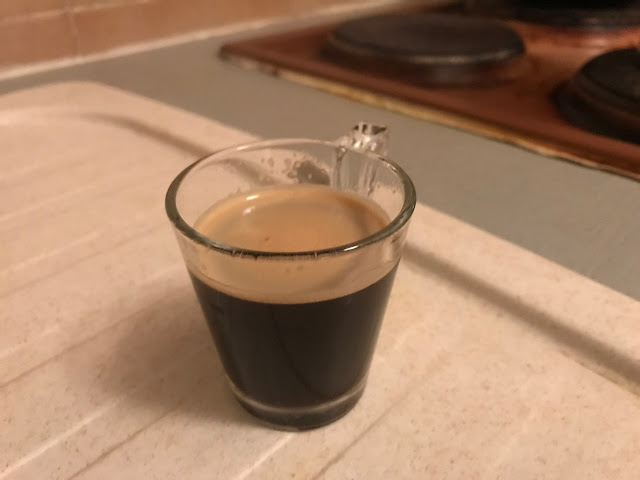 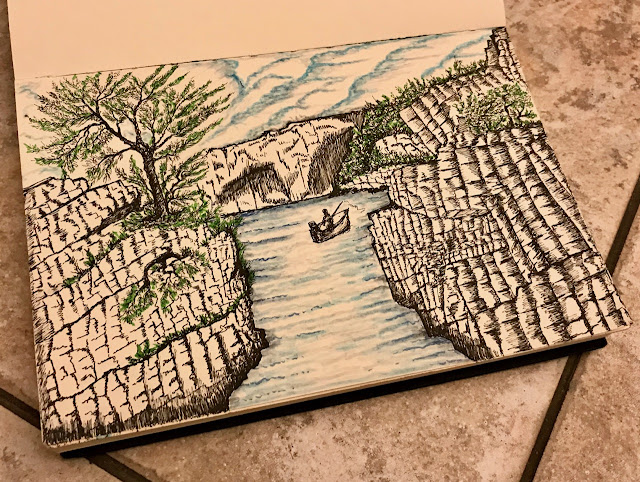 At the hostel, I met two other dorm mates - Nikita and Sergio. They are entrepreneurs and run a company that makes sensors for agricultural purposes. Nikita is from Russia and Serigo from Chile. Apparently, Vélario was serious about the cooking. He wanted to cook a dish made of aubergine for me. He also spoke about the man from India who cooked for free. "This guy is a real master chef", he said showing me a video of this old man from Tamil Nadu who cooked food and distributed them to poor children for free. He and I went to the grocery store together to buy the ingredients for our dinner. He was very upset that he could not find aubergine. He finally got some tomato sauce, pasta and cheese.

Back in the hostel, Vélario explained to me the process while he cooked. He taught me a few tricks that make the pasta tastier even when the sauce is bought from store. He also explained to me, what cheese are to be mixed and what herbs are to be added. It was amazing. He explained how cooking was a ritual in Italy and how he had observed his mother and grandmother cook and had learnt from them. He told me about the traditional cooking methods practiced in Italy. 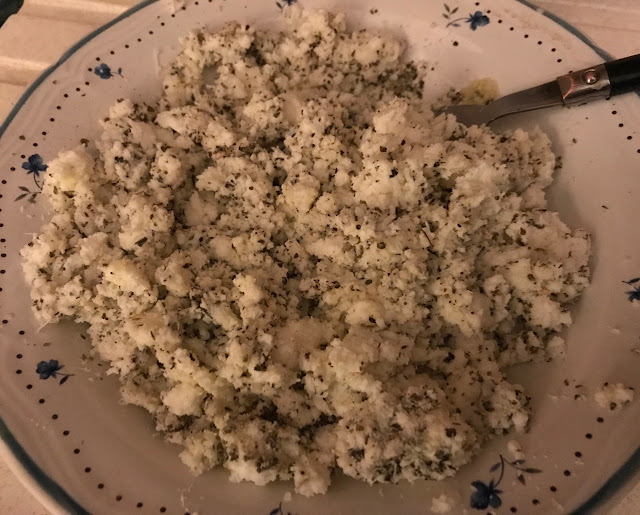 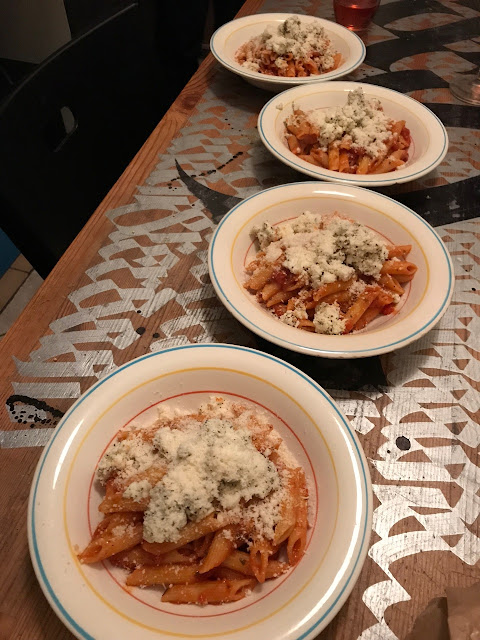 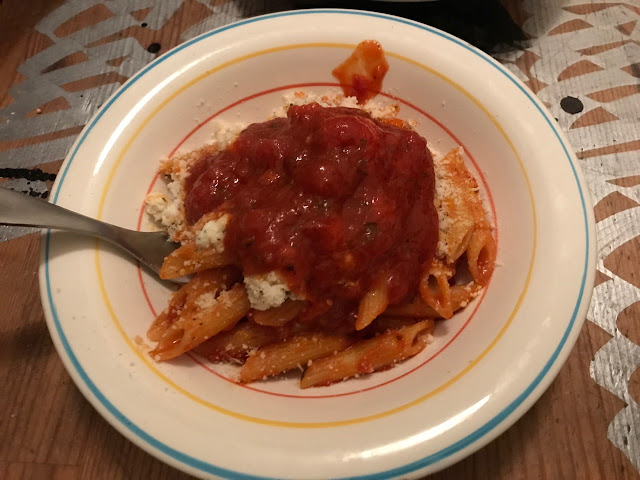 In the cramped dinning room of the hostel, which also happens to be Vélario’s room, four of us sat eating dinner and drinking the rosé that the two had got from the vineyard they had visited earlier that day. We chatted a lot. Vélario of course had a lot to say. He spoke about his days in Italy and in Ireland etc. Sergio told us why he became a vegetarian. Nikita and I discussed Putin and Modi and other political matters from both our countries. It is interesting to note that how well these people knew about India. In America, most of the questions I get is out of curiosity to know more about our country because of the absence of knowledge. But, in Europe most of them knew India as a country very well. They discussed current affairs. So, four of us sat there drinking wine and chatting there until midnight about everything under the sky. I must tell you that this was the best hostel moment so far on this trip. I truly enjoyed the company.