My train to Aix-en-Provence was at around 8:30 AM. While I was dragging my bag into the tiny lift of the hostel, one of the buckles got stuck between the doors and while the lift began to descend, the buckle began to move up, lifting my entire bag. At the top end of the door, it remained, bringing the lift to a stand still somewhere between the third and the second floor. I was terrified and for a while wondered what to do. I started looking for some note to call the reception for help but then thought of trying something on my own first. I tried to lift the bag higher allowing some slack in the strap. That seemed to help and the lift began to descend again. But that happened only till my bag was raised all the way to the top of the elevator door. At this moment, thankfully the buckle broke off. I breathed out in relief as the lift began to descend freely. For a moment, it was really scary.

Anyways, I walked to the station and learnt that my train was delayed and thus sat there to eat some delicious crêpe. While, the traditional crêpe making still remains, the areas where the demand is high, automation has been adopted. I thought that this was a great idea and we could have something similar for Dosas. It seems more productive. 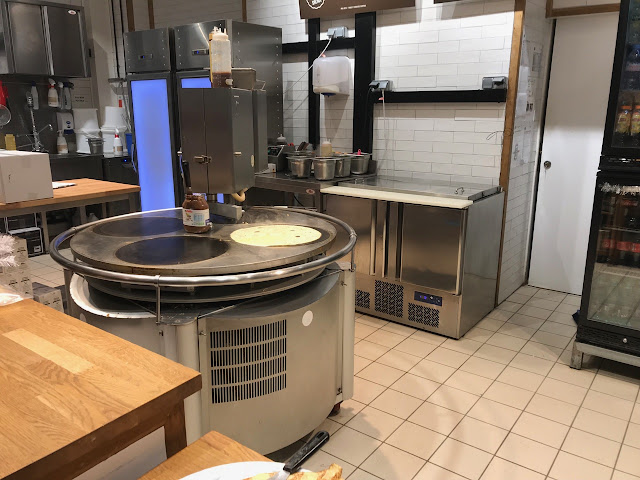 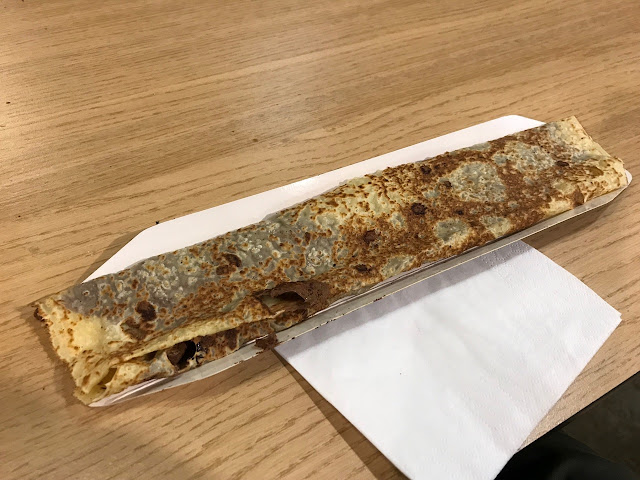 At the station, I observed the graffiti done on some of the trains. Every train has some interesting art work on it. 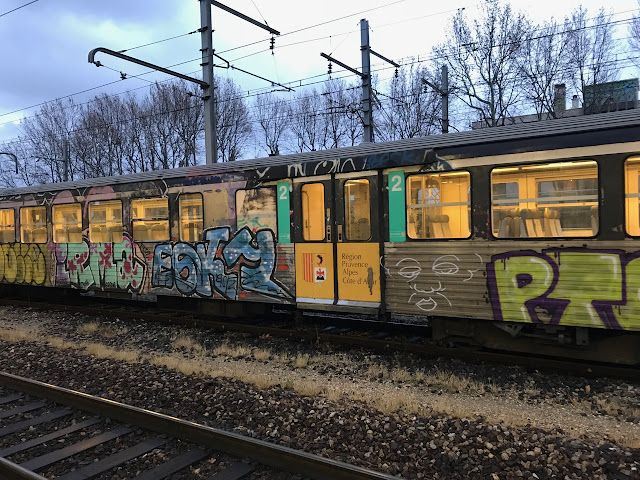 My TGV glided past the beautiful landscape. I am so impressed with the trains here. We boast a lot about the Indian railways being well connected and I totally understand that but we should not turn a blind eye to the advancement in technology that the west is already seeing. The train's speed here is such that, a TGV from Paris to Marseille takes only 3 hours for a distance of 775kms. That is like 50kms less than the distance from Bangalore to Pune. Imagine, if we could travel to Mumbai from Bangalore in just 4 hours. Moreover, this thought is neither new nor unachievable. Yet, many of us laugh at the idea proposed by our current Government to have more bullet trains.

The TGV station at Aix-En-Provence is about 14kms from the town. I could have taken a local train to the station in the town (Gare de Aix-en-provence) but I was not really sure where the youth hostel was located. I was aware that it was situated somewhere outside the  town center. So, I took a taxi to the place. On our way, we had to take some deviations due to a fallen tree blocking the road. The taxi driver knew the location well. The youth hostel - L'auberge de jeuenese is situated in a beautiful location about 2kms from the town center. I left my bag at the reception, gathered some basic information about how to get to the city and set off to explore the town. 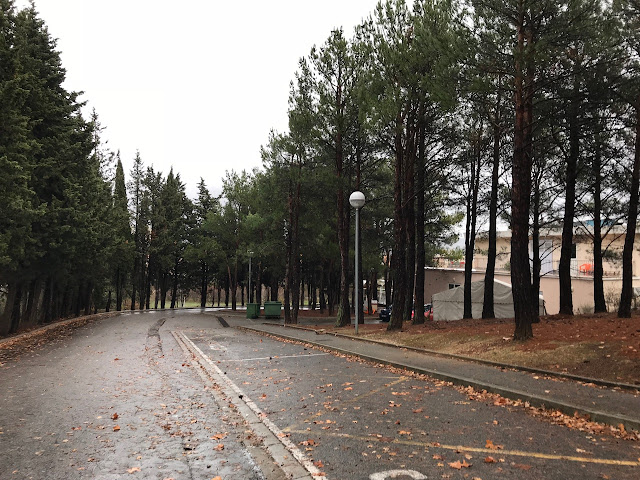 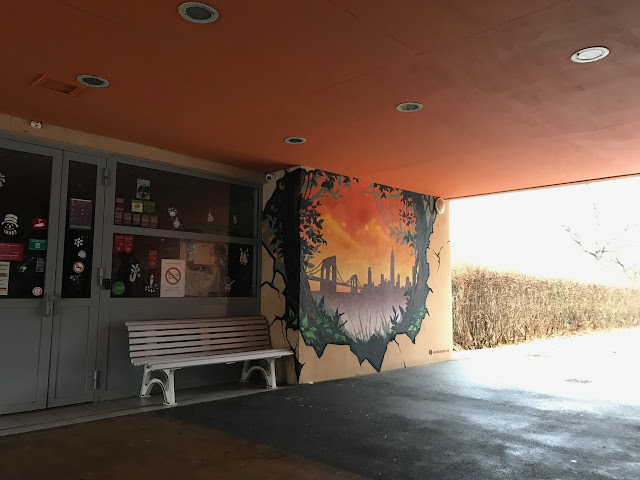 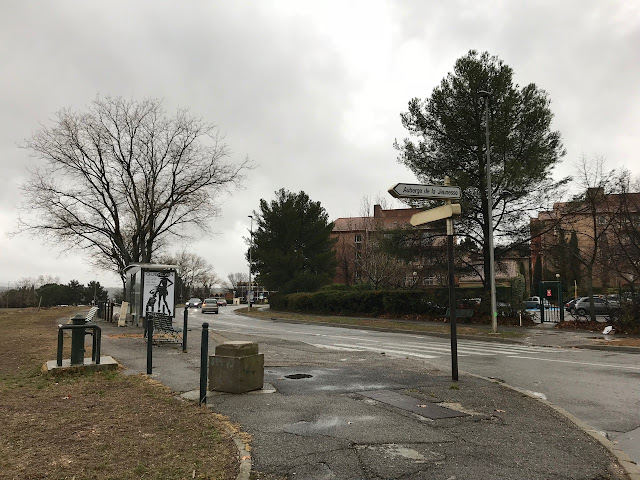 As guided by the manager at the hostel, I waited at the bus stop for bus number 2. There was one more lady at the stop. She was of African origin. A drunk white man walked to the bus stop continuously cursing someone. He seemed to have had a fight with his woman. We both ignored him as he continued to scold someone and talked to himself. We boarded the bus when it arrived and I bought a single ride pass for a dollar. The lady who had boarded with me, understanding that I was a traveler, explained to me how things worked. She told me that the pass worked for any number of rides for an hour. There was another that could be used on a single route for multiple rides in a day.

I got down at the town center. Aix-en-Provence is known for its streets filled with shops that sell top brands. It is a very upscale area. I loved my walk around the town. The streets are beautiful and the buildings are very impressive and coloured thoughtfully to present a picturesque view. 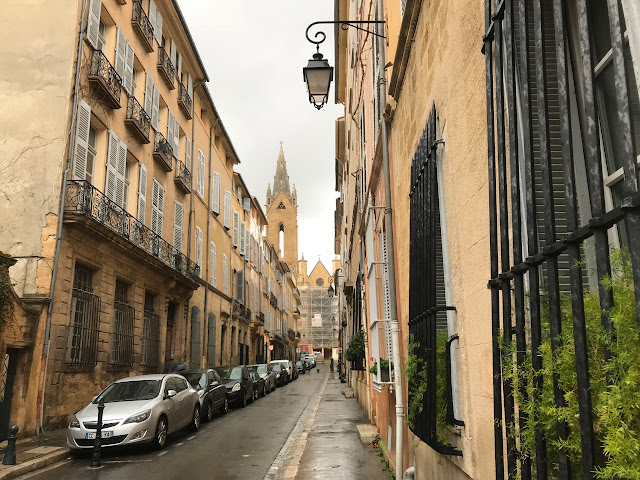 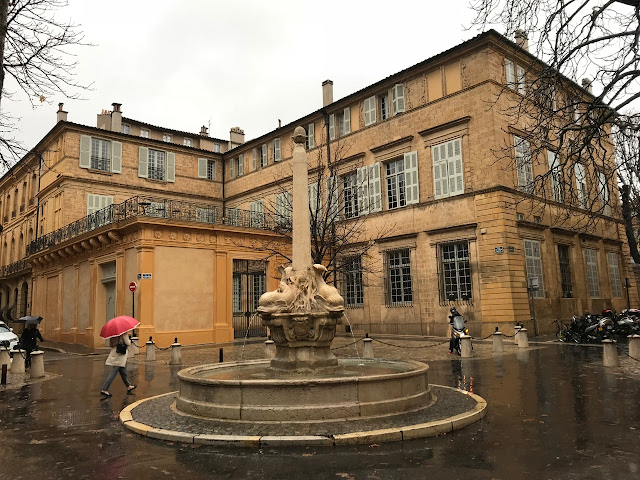 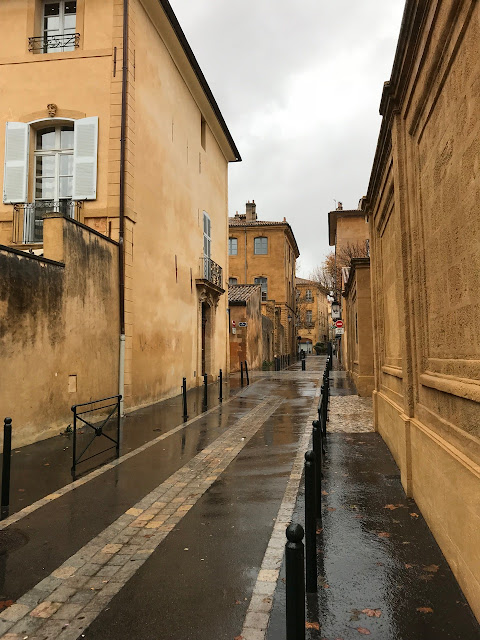 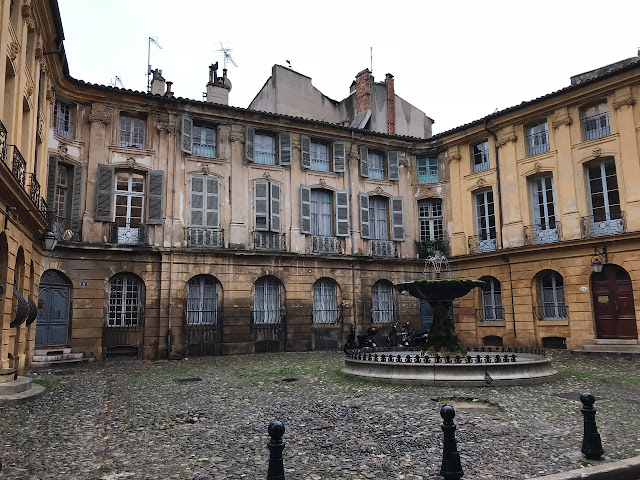 The main street was filled with tiny wooden shops like in all other towns that I had visited thus far. They sold interesting products. I bought a pack of tasty Calissons - a delicious sweet dish made of almond paste topping with candied fruit base. They looked very pretty and inviting, just like the beautifully constructed town of Aix-en-Provence. 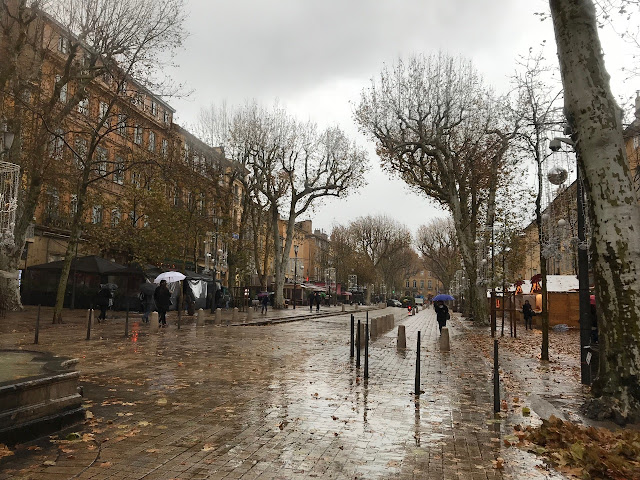 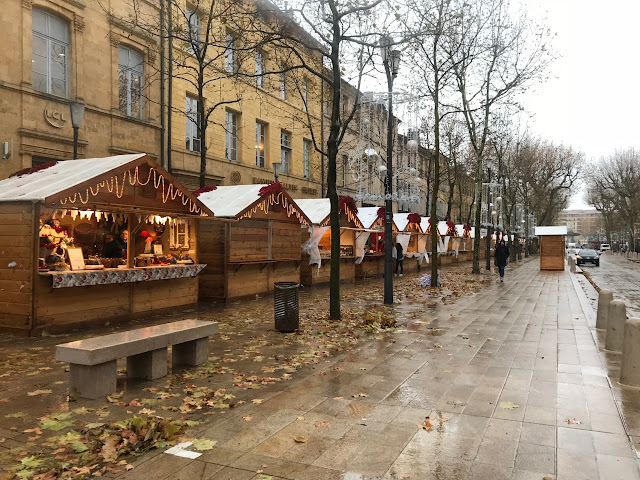 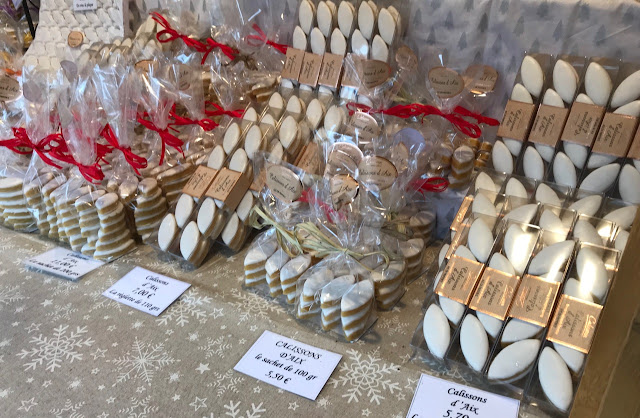 The town also seems to be obsessed with the famous local artist - Paul Cézanne and you could find his name everywhere. He was one of the popular post-impressionist artist who hailed from Aix. 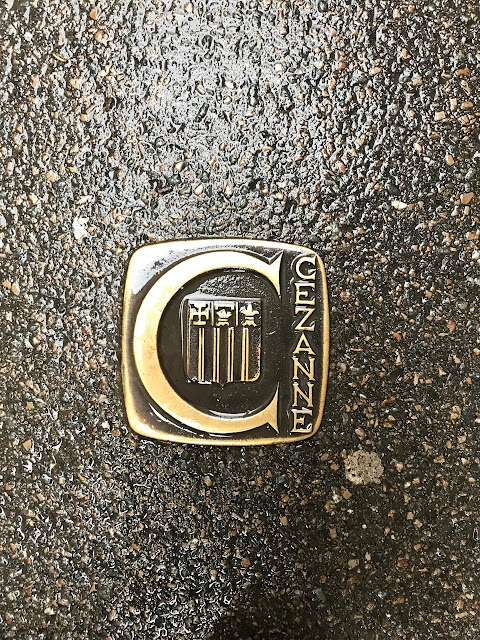 I also stopped by a hotel where I witnessed a very interesting exhibition of paintings by Botero, a columbian artist who was inspired by Pablo Picasso. These paintings have nothing to do with cubism art form but they take some known works and recreate them with fresh look and a different perspective. All characters in Botero's paintings are overweight and they bring a very different sentiment to the topics. 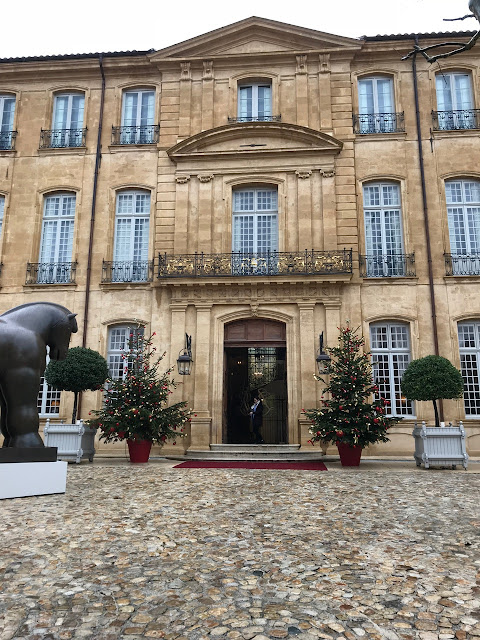 I googled for a good vegetarian restaurant and found one. I had some tasty dish with rice, vegetables and peanuts, coffee and tarte  The tiny restaurant run by two women was very neat and I sat there for a watching the town soak due to light shower. 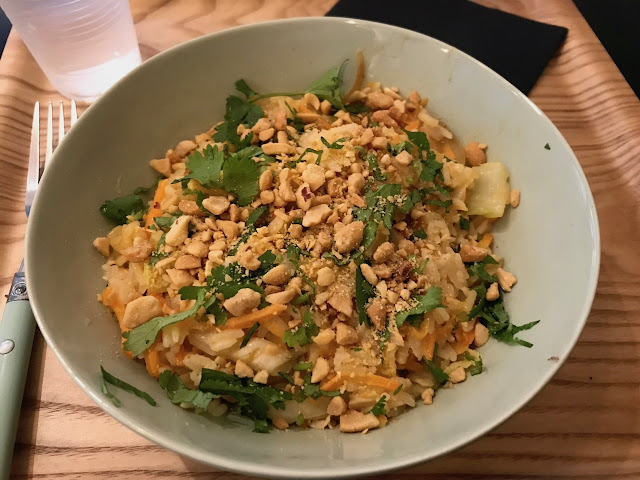 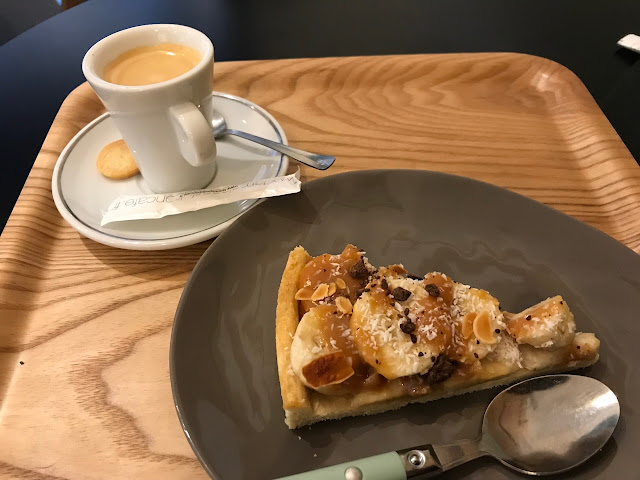 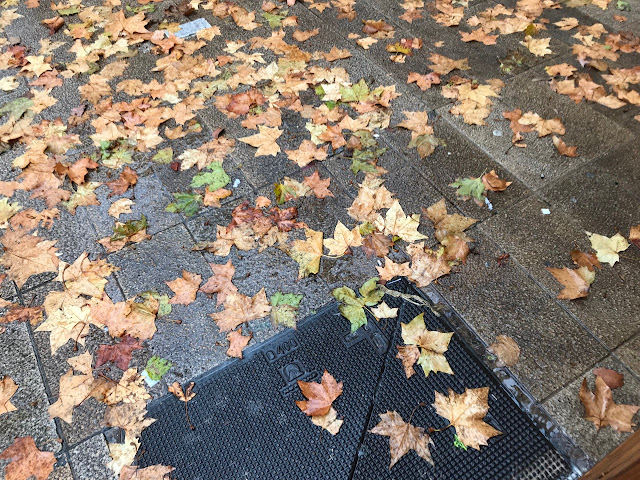 I returned back to the hostel and checked into my room. In my dorm, there was this grumpy overweight guy who did not bother to return a smile. Half naked, he lay on his bed, busy staring at his cellphone. I unpacked and walked to the dinning room to have my dinner - Some remaining baguette and cheese. I wrote my journal and came back to the room. The grumpy guy found something very exciting on his phone and suddenly got up from his bed to dress up and left almost immediately.

An Arab boy also shared the same room and he seemed to be very friendly. We spoke a little. But he appeared over excited. I did not really like the room as it was not very clean. There was this odd smell that came from the attached bathroom that was mostly left open by the others. But, I was extremely tired so, I decided to go to bed early. It was the dullest hostel I have ever been to. At around midnight, the Arab boy was talking loudly with some girl on phone. He had set his phone on speaker and thus it was very disturbing. However, since I was really exhausted, nothing seemed to bother me and I went back to sleep quickly, despite the noise.