Every day thus far had been so loaded that I had to change my initial plan and explore some place close by. Kowloon Peninsula is a big place though and would be hard to cover in a day. So I had planned two days for this area. We left the hostel at around 10:30AM and took MTR to Prince Edward station where we changed to the Kwun Tong line. We got off at Wong Tai Sin Station and at the B3 exit itself is the Sik Sik Yuen Wong Tai Sin Temple. The temple compound shares a wall with the station so it is impossible to miss it.

As soon as we were at the entrance we saw a crowd of tourists. To me, this place appeared more like China than Hong Kong. There were visitors all around taking pictures beside every sculptor; security guards were screaming to clear way. But the temple is humongous in size as compared to the one’s we had visited previously with an over explosion of colours, pillars, incense and of course visitors and devotees. 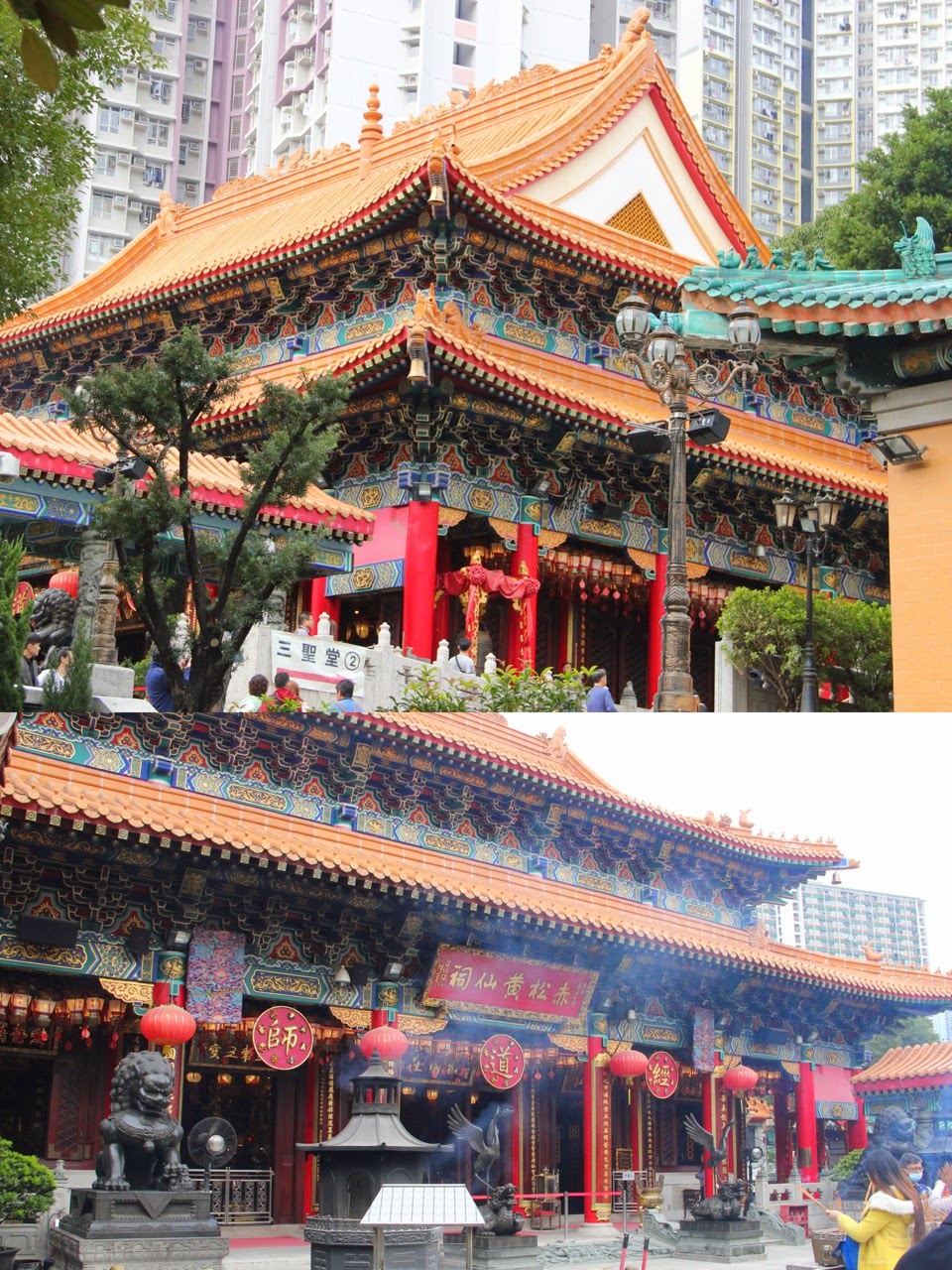 The main entrance has some interesting and strange idols of half man half animal kind of species each carrying some thing unique. 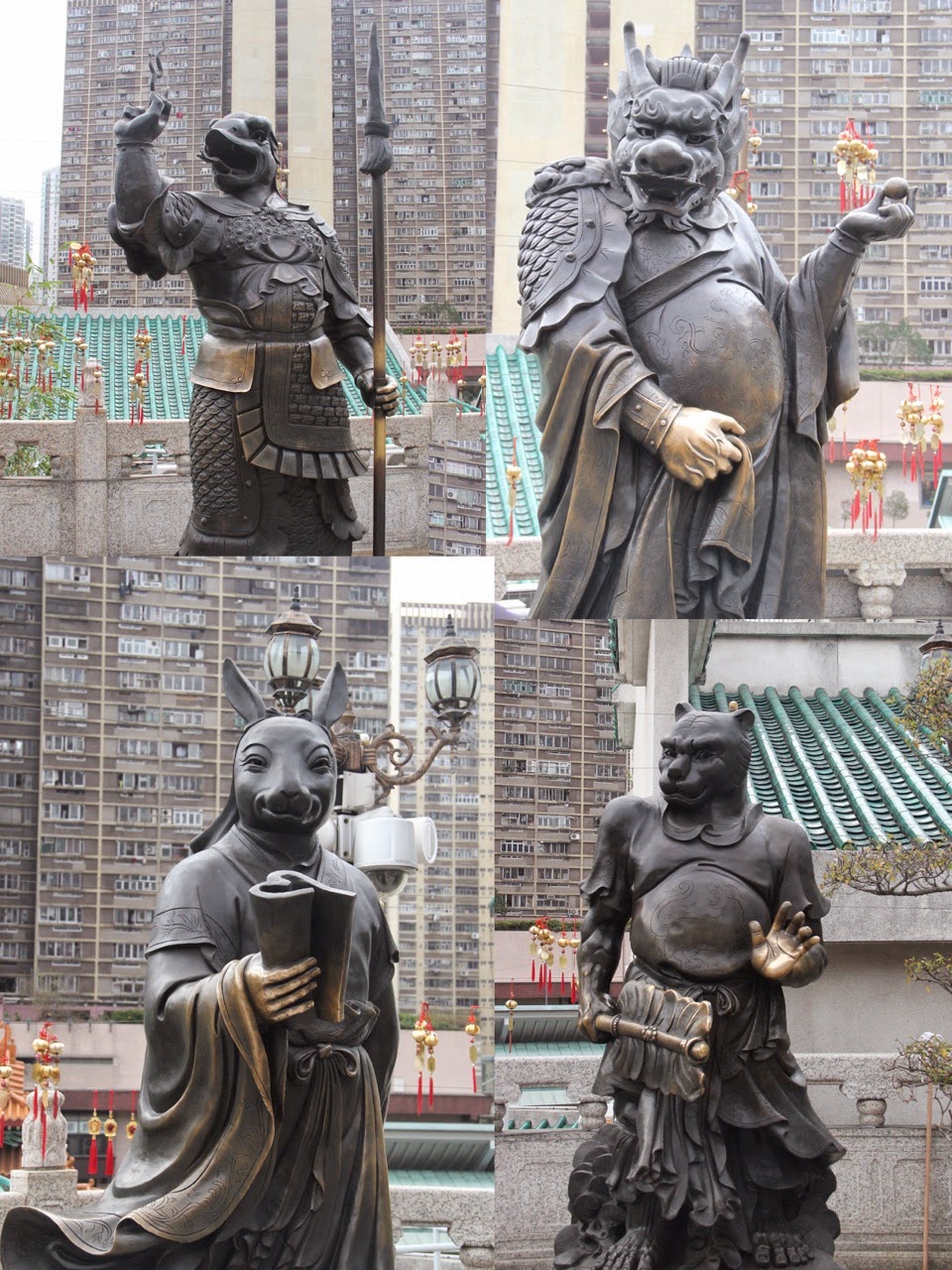 This Taoist temple is dedicated to a deified healer named Wong Tai Sin who, as a shepherd in Zhejiang province, was said to have transformed boulders into sheep. When he was 15 an immortal taught him to make herbal potion that could cure all illness. Taoist ceremonies and rituals take place in the main altar. 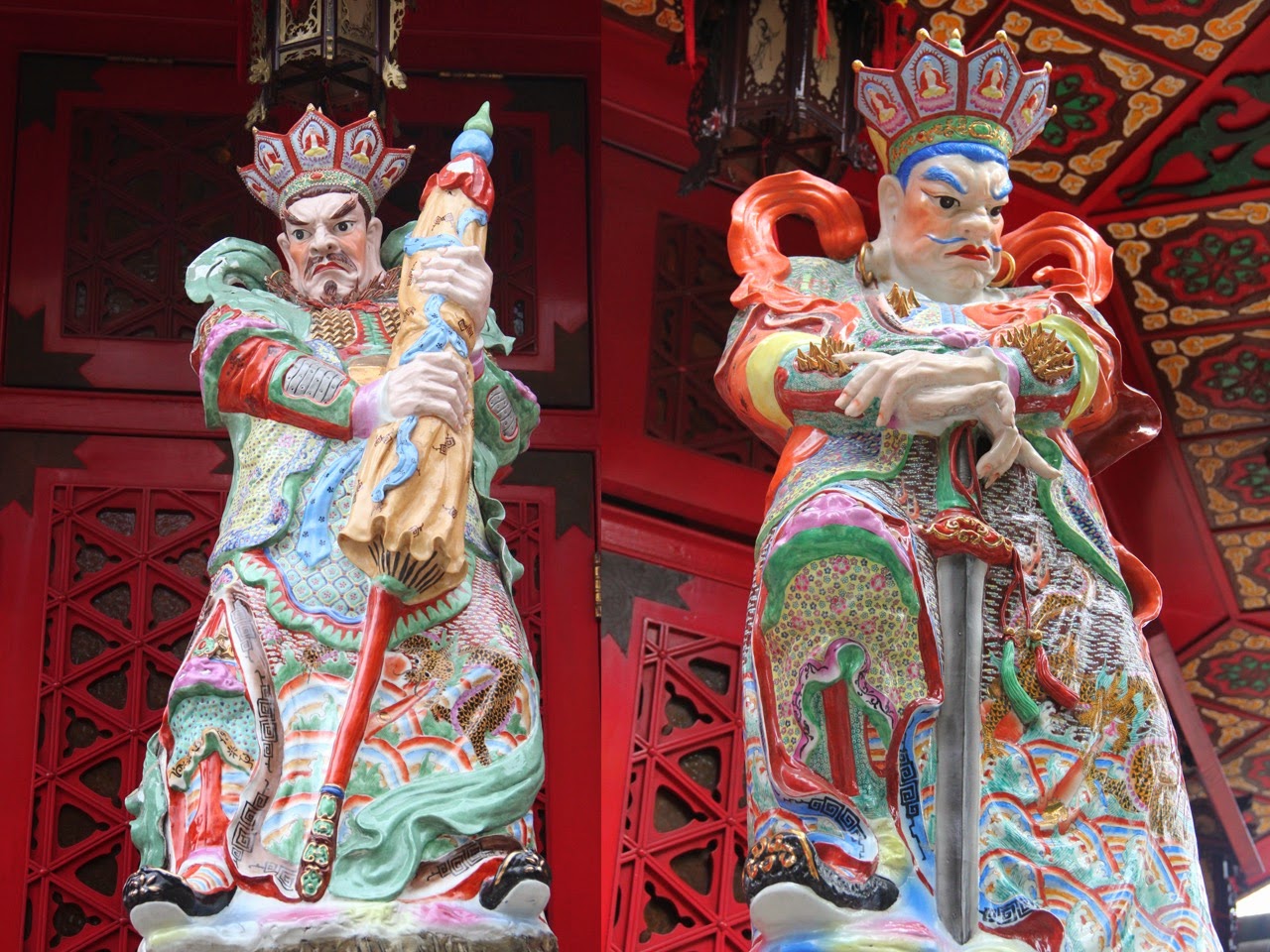 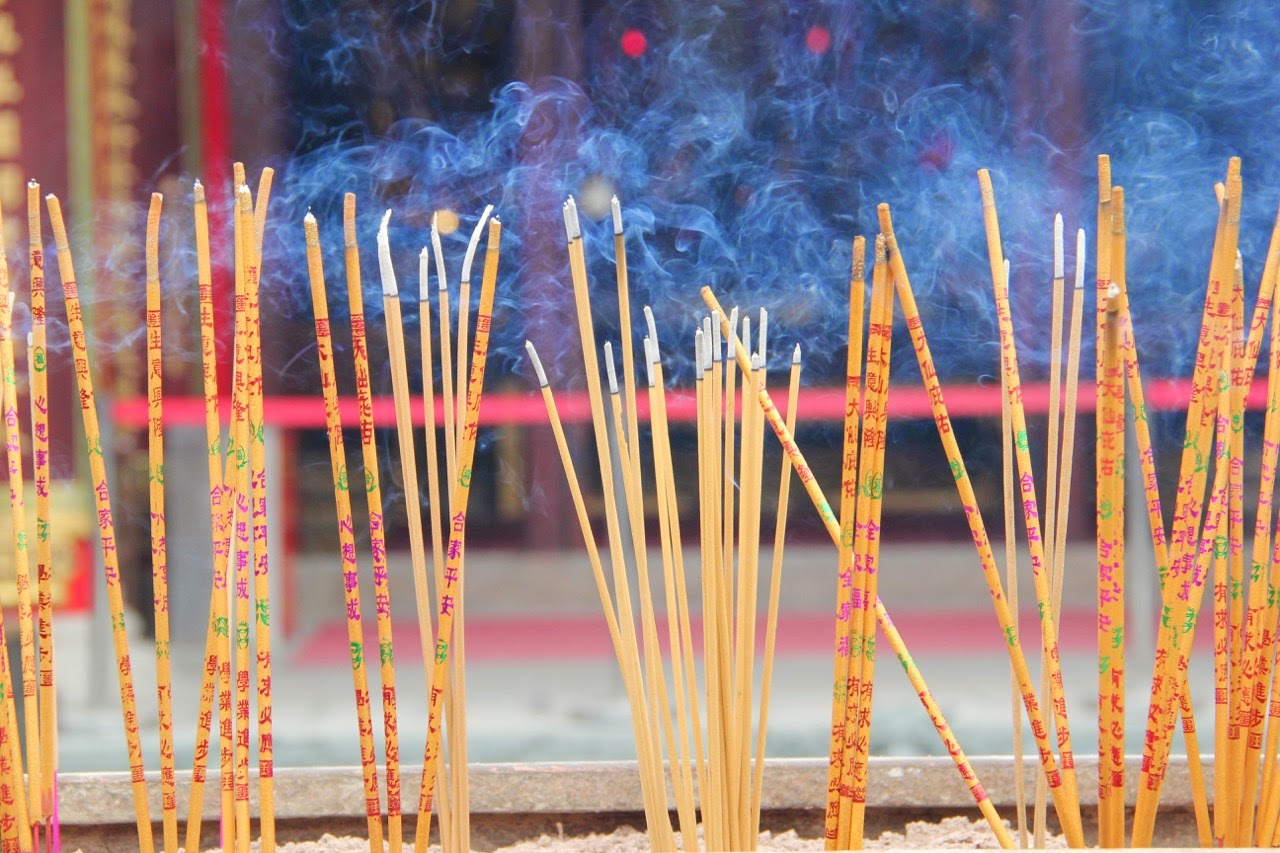 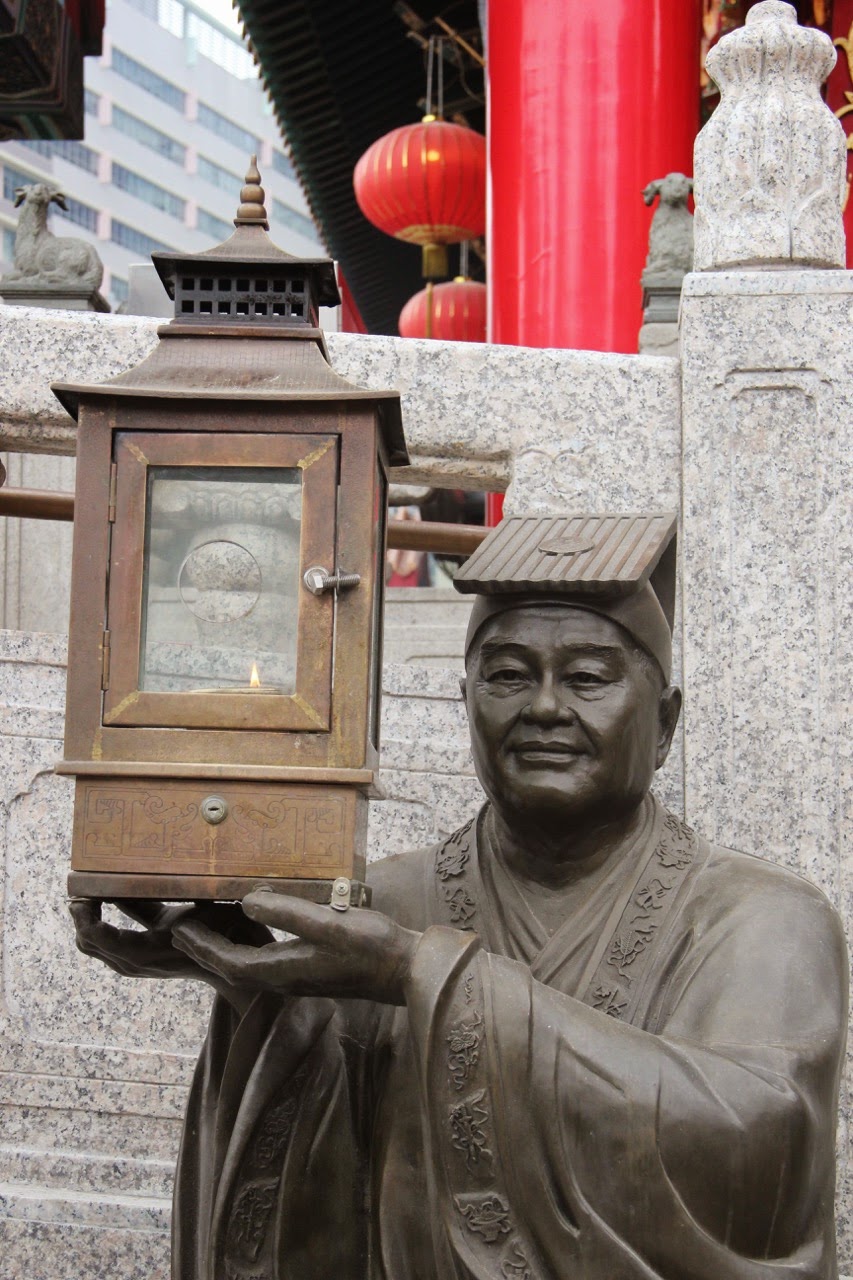 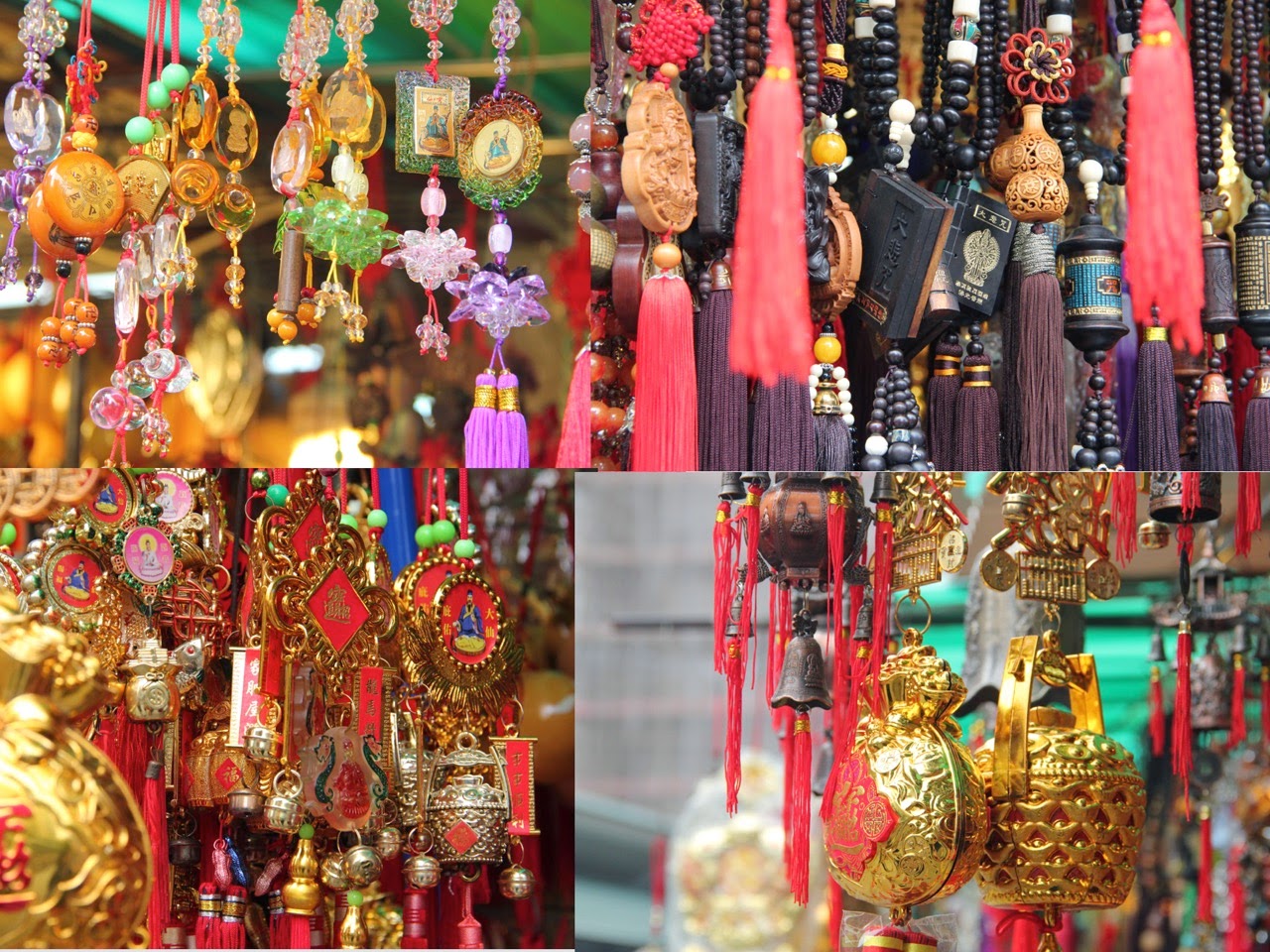 Something interesting to notice while here is the use of fortune sticks called Chim. Devotees pray with a box full of chips and they shake it constantly until a few fall. These chips are then interpreted by fortune tellers in the temple premises. It was a quiet interesting sight. In the few days of my stay, I had understood that Hongkongers are quiet spiritual. 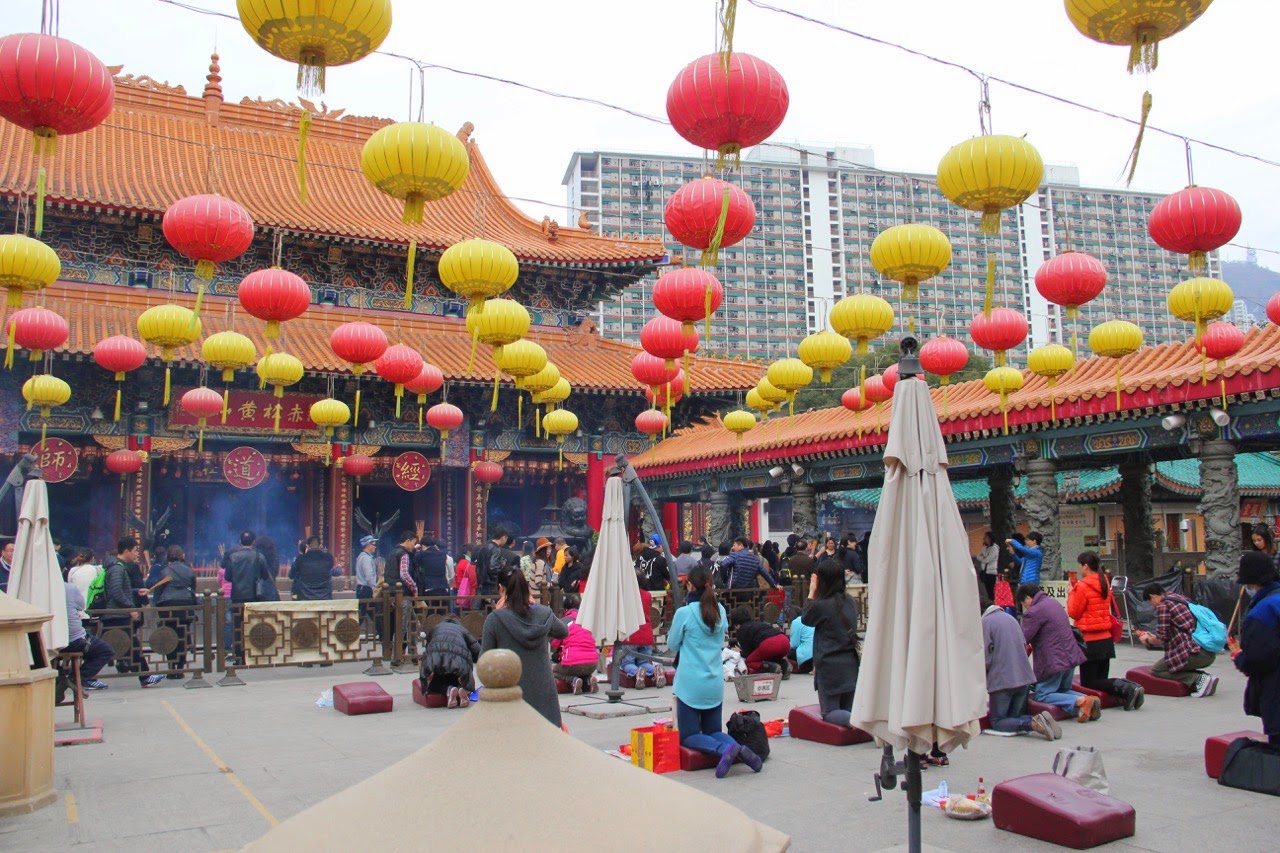 On one side of the temple are the Good wish gardens.  Its a nice place to walk and relax. 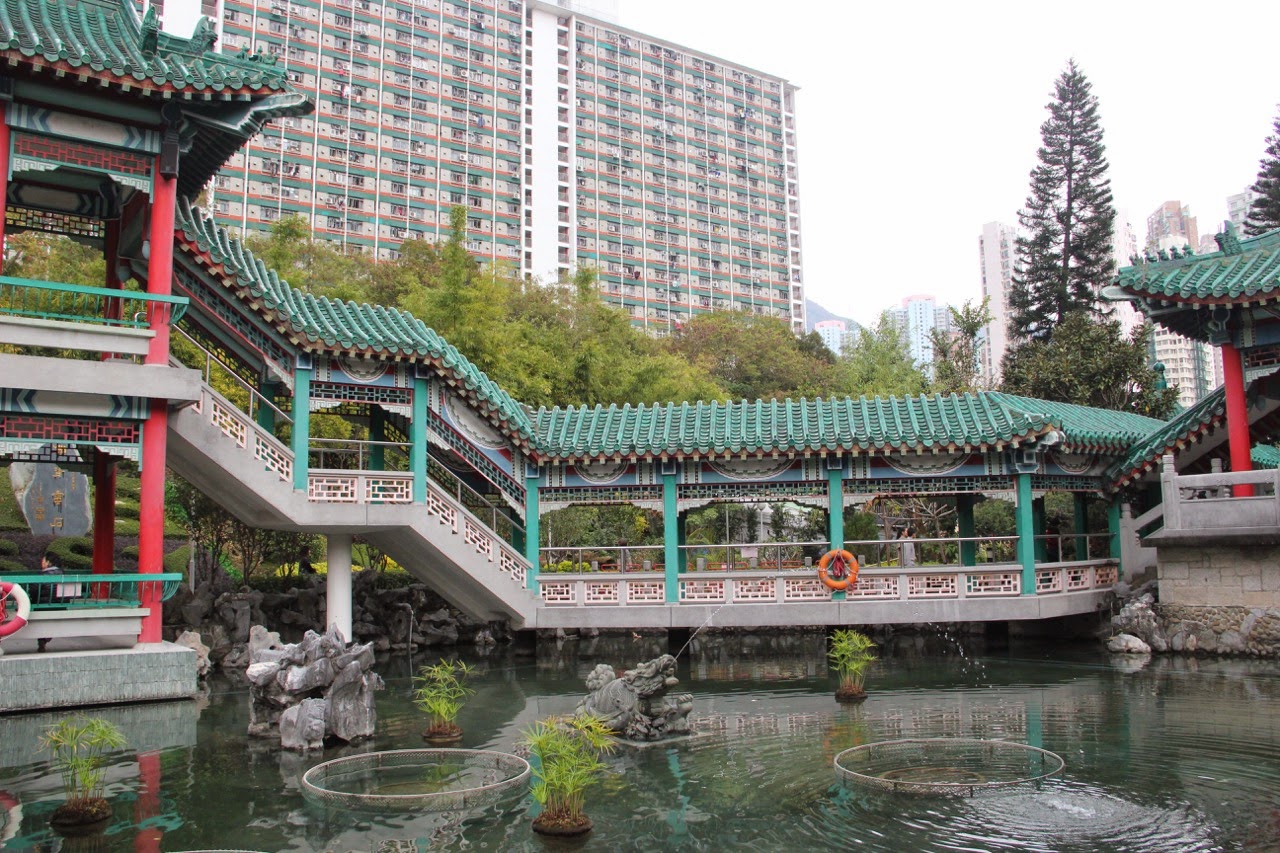 Just outside the temple a visitor from Beijing asked me if I could pose for a picture with him. I agreed. He seemed delighted by the acceptance and started looking for someone to click the picture. He found a tour operator who could speak English. We got our pictures clicked. Then through our interpreter 9the photographer) we exchanged our country of origin. We said good bye to each other and left. It was strange but an experience to remember.

We continued the MTR line to Diamond hill station where there are two attractions - A nunnery and Nan Lian Garden. Both are on the either sides of the Fung Tak road as you take Exit C2 and go through Hollywood plaza.

The Chin Lin Nunnery complex is an impressive architecture built entirely with wood and all the joints are without nails. The inner sanctum has Huge Buddha idols surrounded by the six celestial kings. Several other idols are all along the main complex. Outside, you shall find a lot of bonsais of pine tree, boganvilas, orange and many other variety. 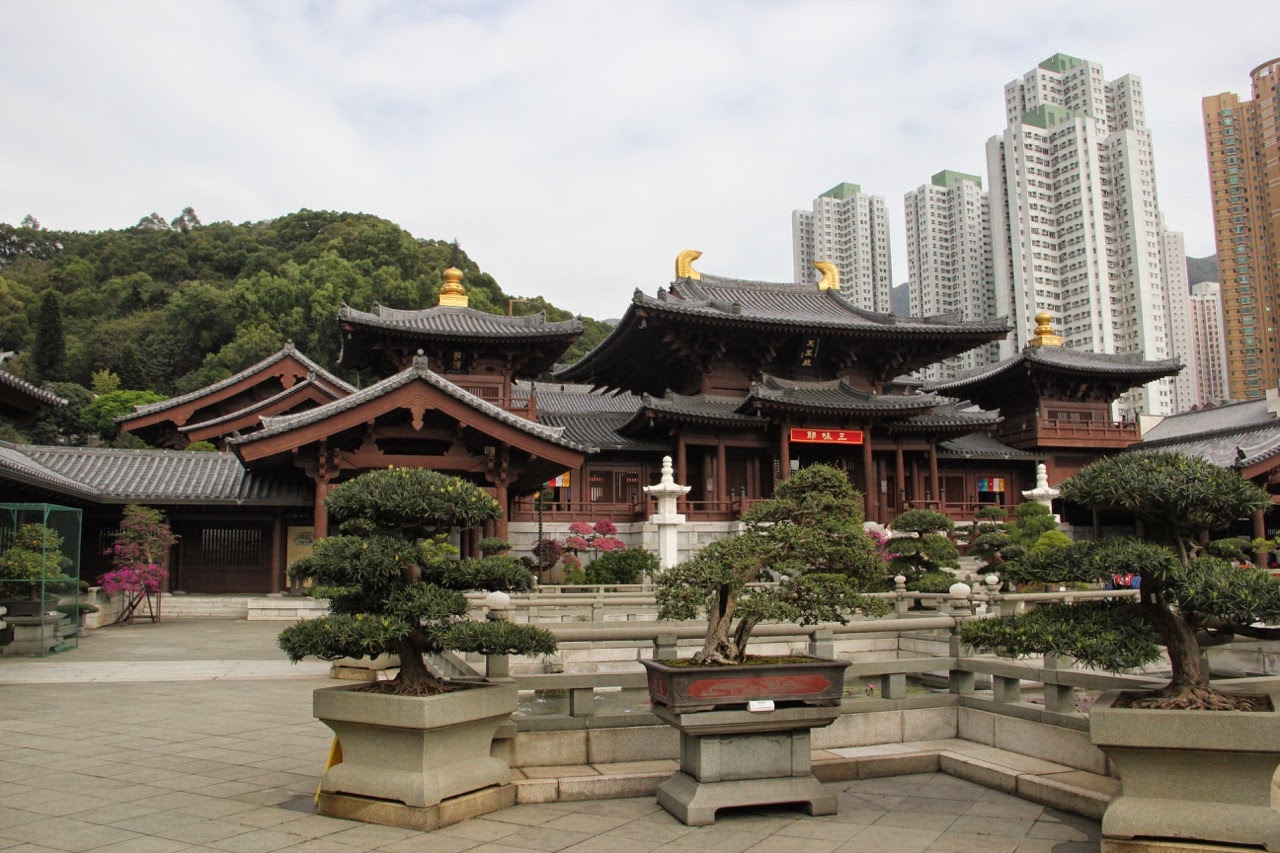 Next to the compound is the prayer hall where the Buddhist nuns pray. A kind security guard allowed us to view the ceremony that was in progress for a while.

We then took a stroll in the Nan Lian Garden. Nothing great but some impressive architecture will keep you engaged. 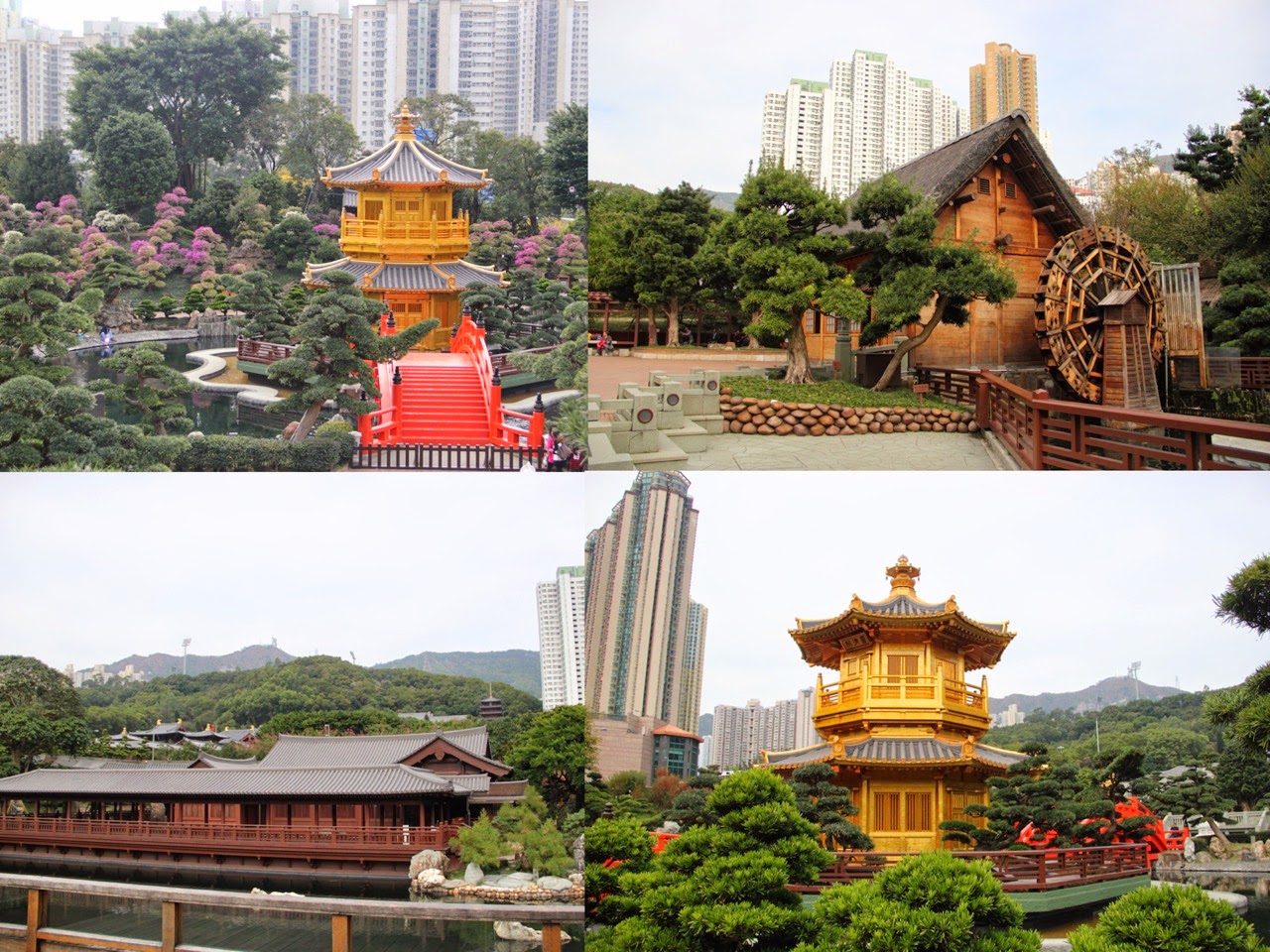 The rain harvesting technique seems to have been in use since a long time here. Interesting metal structures lead the water droplets down from roof to floor and as the droplets travel, hitting the metal cups the create music. A visitor explained this phenomena to me while I was observing one of them. 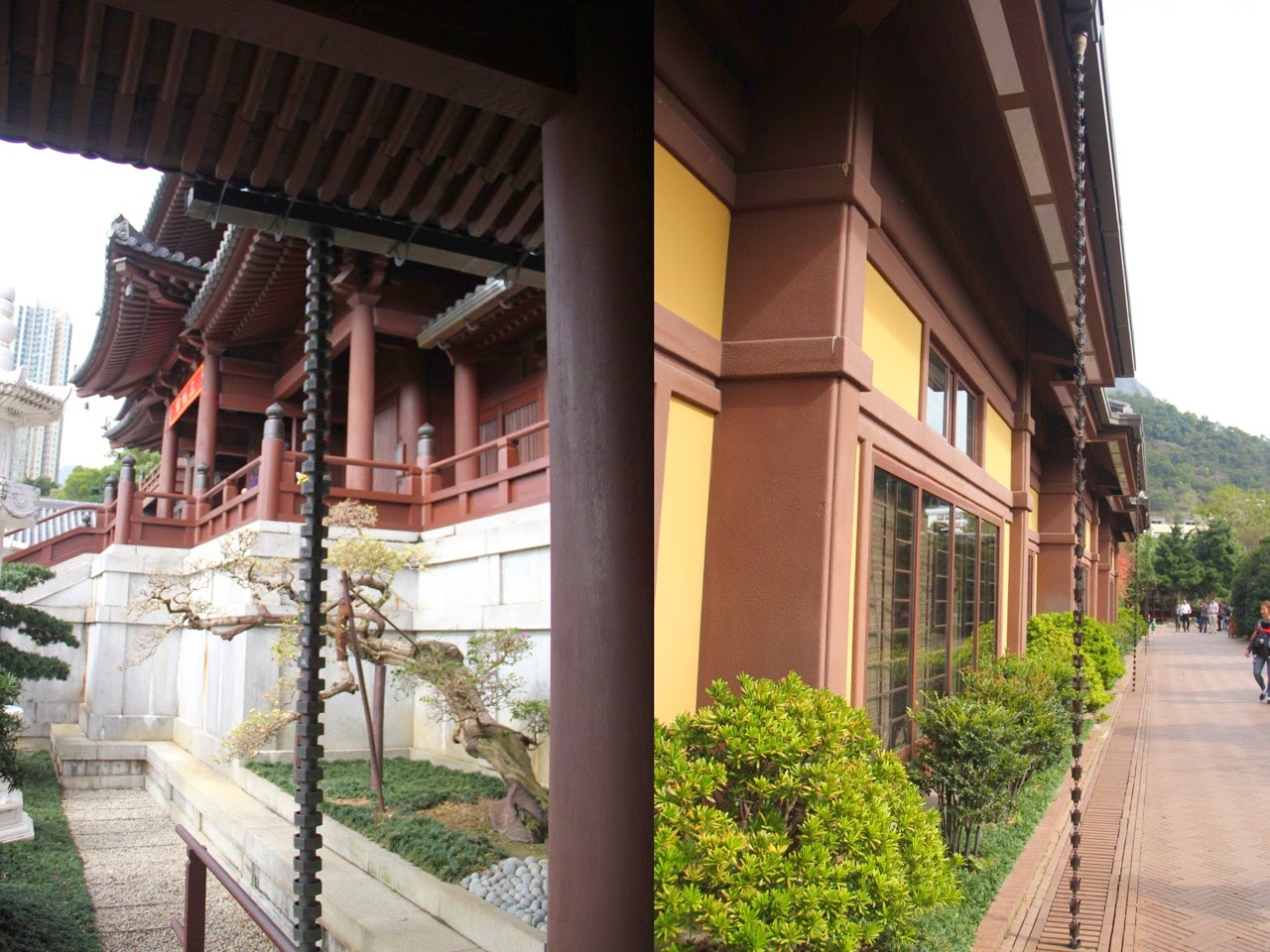 They do have a vegeterain restaurant here but the menu looked very similar to that in the Po Lin Monastery, so we did not want to take that risk. So we enjoyed the surroundings for a while and decided to leave.

We went directly to Tsim Sha Tsui and thanks to our lonely planet guide we found an indian restaurant called Tandori Nights. As you take Exit B1 towards carmon road and walk along the road, the restaurant is on your right. They were just about to close the lunch buffet so we were on time. The food was good. It was like heaven to taste some good indian food after these many days. While we were about to finish a group of indians walked in asking for food. It seemed like they were a few families on a package tour. The tour guide had directed them to this hotel but they were 30 minutes past the lunch cut off time (3 PM). The server asked them if they could adjust with what is remaining. Seeing no choice they had to agree. Thats when we were ready to go after a good Indian buffet for HK$110.

We next walked to the Hong Kong Museum of History which is on Catham Roud South. My cellphone battery had died and the adapter stopped working so I had left my phone at the hostel. But I think it was for good. Google maps can confuse you. I realised that the signboards in Hong Kong are just awesome. All tourist attractions are clearly written on a pink signboard and they lead you all the way from a nearest MTR station.

This being a Wednesday, entry was free. So you can keep Wednesdays as your Museum visit day. If you are fond of museums, then there are plenty in Kowloon alone and a tourist Museum pass is also available.

The Hong Kong Museum of History had some interesting short films -  On Prehistoric Hong Kong, A history of Cinema and the story of Hong Kong from the British rule to return to China in 1997. Lots of display of utensils from olden times and a fine display of HK folk art comprises of the rest of the meuseum. The Museums normally close at 6pm but this being Christmas eve they were closing at 5pm. Just opposite to this museum is the Science museum which looked interesting too but we were out of time.

Impressed by the suggested walks on my lonely planet book, I took one here too. We stopped at Rosary Church on Chatham rd South (the same on which are the museums). The crib was ready and they were getting ready for the evening celebrations.  It is supposed to be Kowloon’s oldest catholic church. 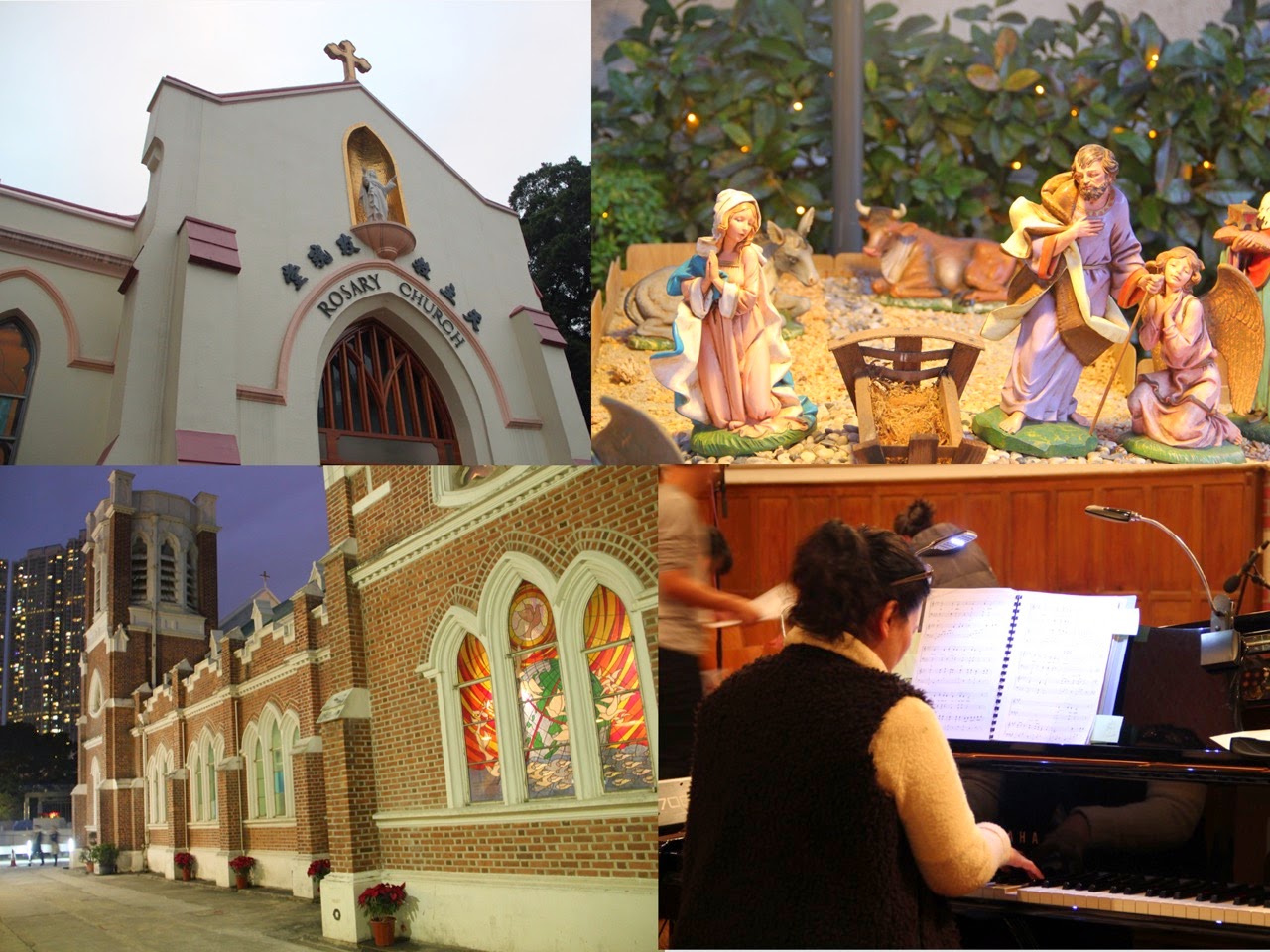 We then took Austin road to reach Nathan road where we stopped at St Andrew’s Church. Here, preparations for a choir. We sat there for a while observing everything happening there. Everyone were nicely dressed to celebrate Christmas with family members. Selfies were in progress here as well. Lots of musicians were in action. The pianist was brilliant. However, the main singer or coordinator was a little to hyper. She kept screaming, dropping things and giggling all the time. We stayed there for a while and heard them sing. We decided to leave before the event could start at 7PM.

We walked continued on Nathan road till we reached the harbour. Nathan road is filled with shops and it is almost impossible not to stop at a few. At the harbour the laser show (Symphony of light and sound) had begun. Roads were all blocked for God knows what reason. We had to take a long way to get to the Hong Kong Cultural centre. The Laser show is from 8PM to 8:20 PM every night. Many buildings on either sides of the harbour display the lights for a background music played at the cultural center. It was simply magical to observe the HK skyline all lit for christmas. 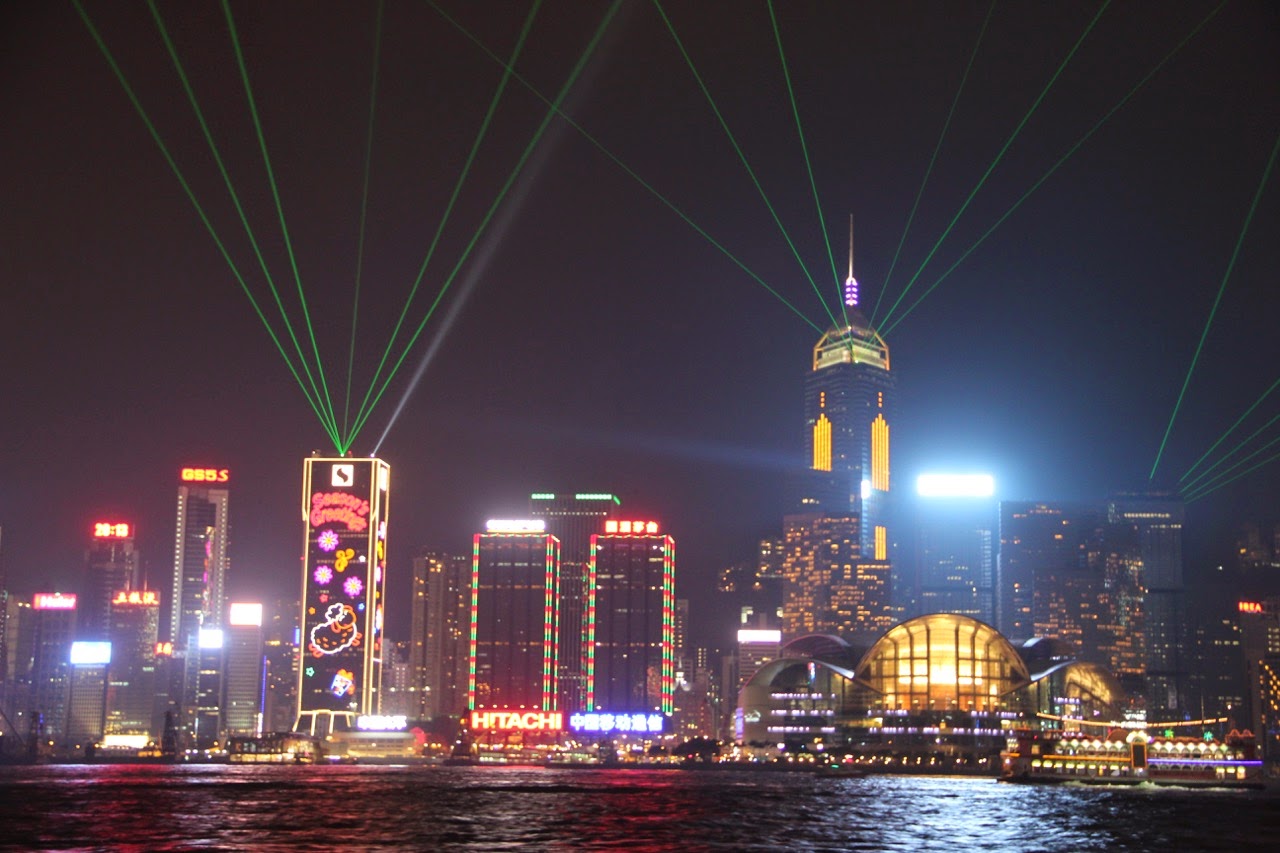 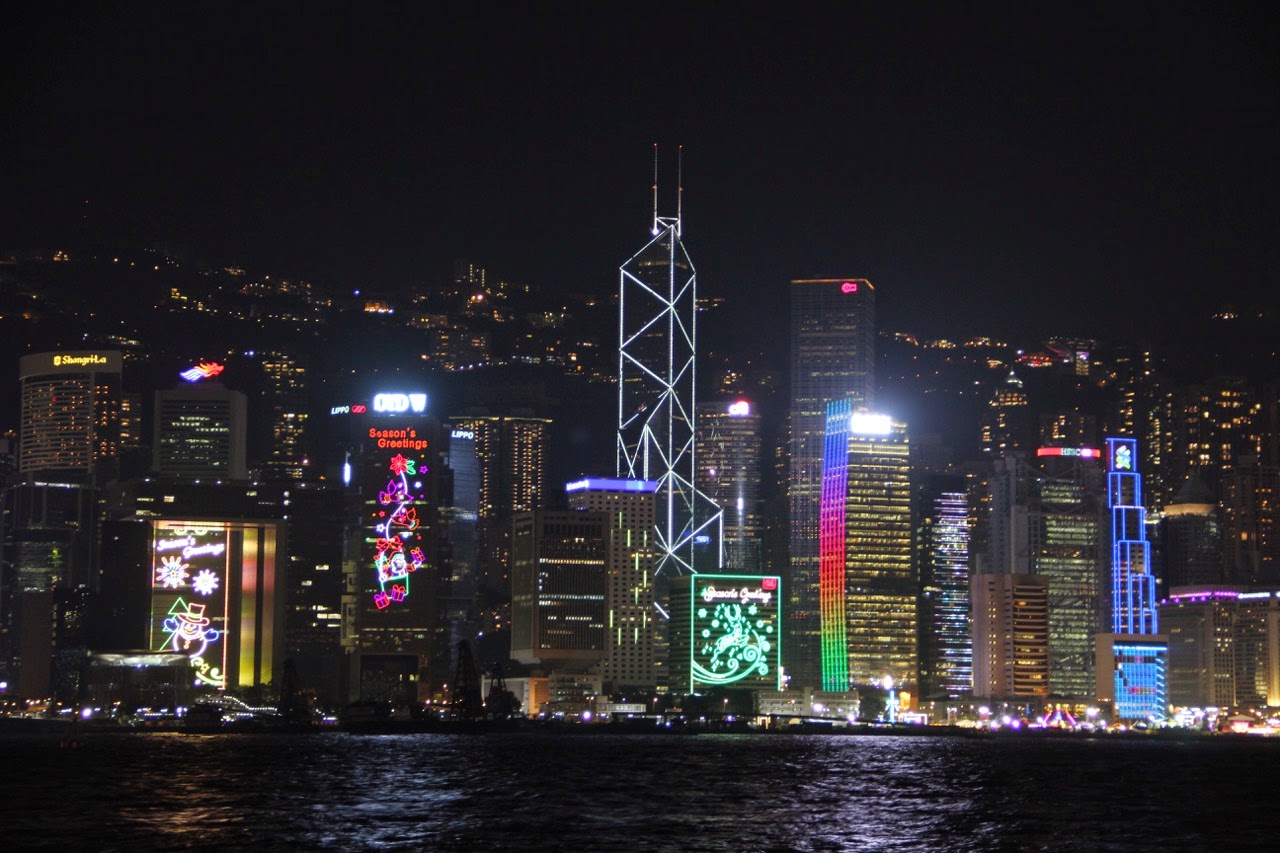 The harbour was filled with few ferries, boats and a cruise. Out of those the junk boat with its red sail cloths looked fabulous. 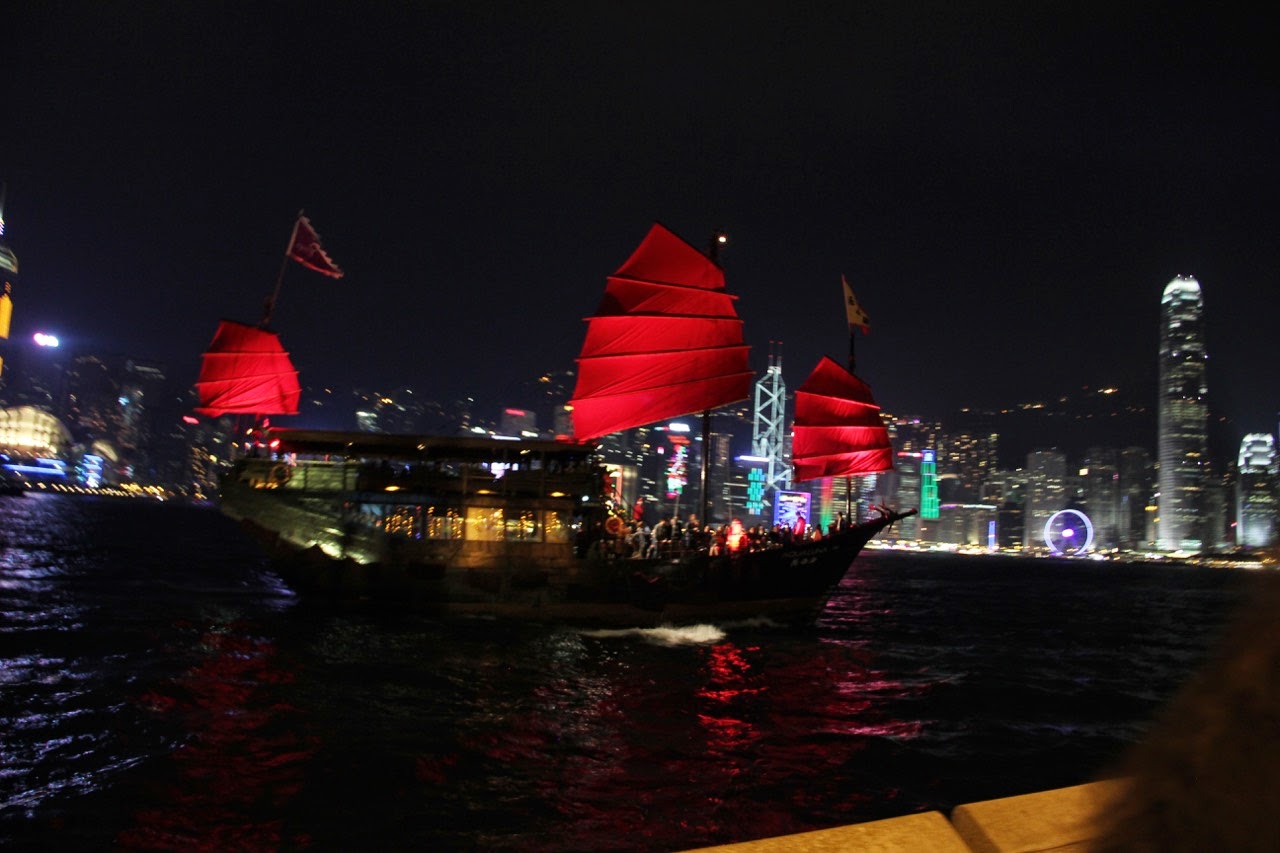 Again the entire Salisbury road was blocked so we had to walk a long way to get to the MTR station. There were several bands of young musicians and singers performing in public. The roads were jam packed with people shopping for Christmas. It was truly a festive atmosphere everywhere. MTR was to run 24 hours this day to support public. Leaving all that Euphoria at Tsim Sha Tsui, we returned to rather quieter side of Kowloon, to our Hostel.