It had been two days and we were yet to see the Business district of Hong Kong and the day had arrived to view the cit with most number of sky scrapers.

We had begun to love MTR and the ease with which we could travel in it. We took the train from Sham Shui Po to Tsim Sha Tsui. The train was crowded as people where hurrying for work. Almost everyone seemed to be to themselves or with their cellphones. No body stared at people like you might see in India. Youngsters where always busy with their cellphones playing candy crush or other games. And then there were tourists like us observing everything but avoiding an eye contact. We could have taken the same train o central but I had planned to take the ferry to have different experience.

Tsim Sha Tsui metro station Exit L6 will directly take you to the bus terminal and star ferry. One of the two ferry terminals have service to Central and the other to Wan Chai.

The ferry is the most inexpensive way to cross the Victoria harbour (HK$3) as compared to MTR or Bus which is around HK$9. As we sailed across, the closer we got to the spectacular view of the city filled with sky reaching fascinating structures. 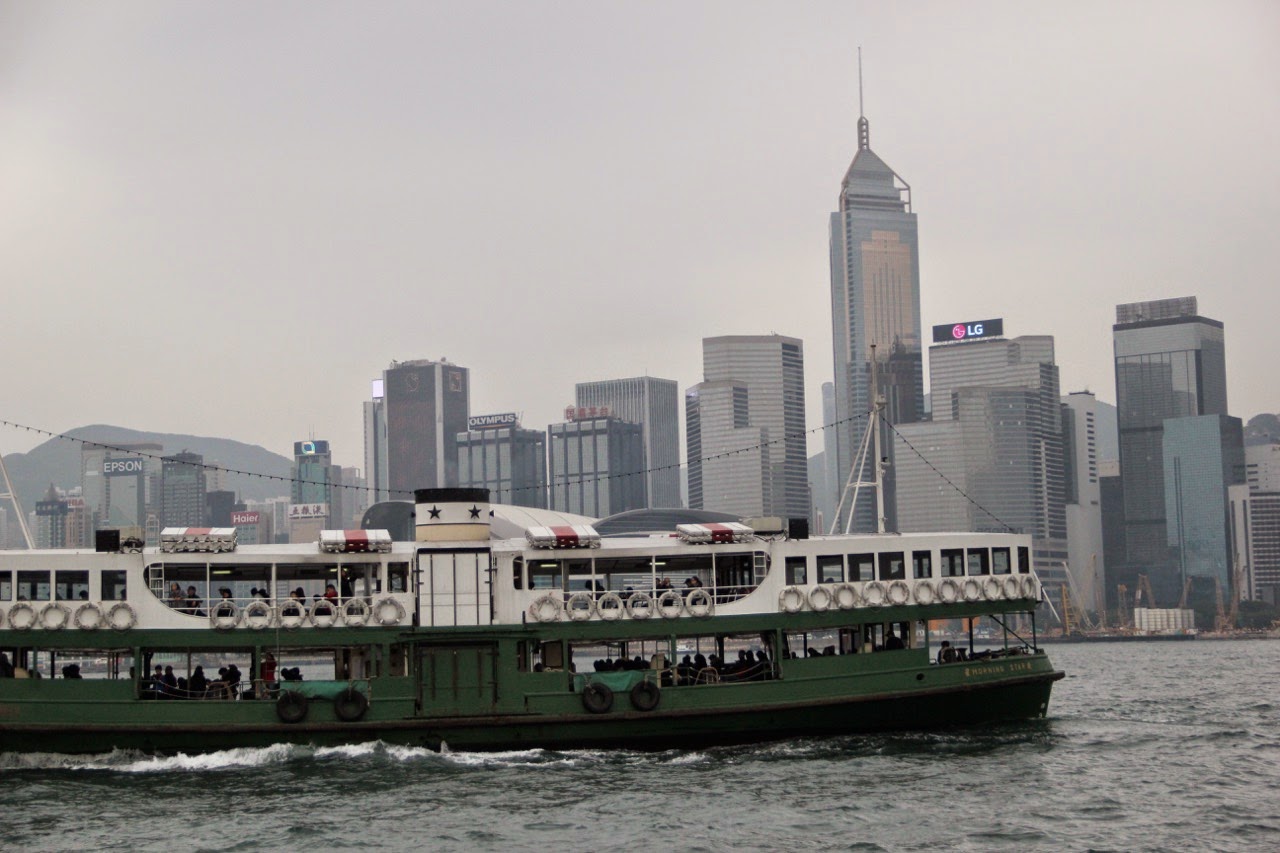 The ferries to Kowloon arrive at Pier 7 of 8 piers on the Central side. We walked to central MTR station through the biggest mall in Hong Kong - IFC. But however, to get to the Victoria peak, we had to take either a bus or a tram. The bus terminal was just outside the IFC and we took route # 15 to the peak. Sitting in the top seat of a double decker bus and riding up the Victoria peak is quiet an experience. Like all other bus terminals and MTR stations the station at Victoria peak is also under a Mall. As you climb up the mall you have some free observation decks. But the best one is called Sky Terrace 428 which is at the topmost floor of the mall above the tram station. They charge you around HK$25 or something for the viewing and an audio guide. The view from here is spectacular. The experience of looking down at this magnificent city is just beautiful. These pictures must speak better. 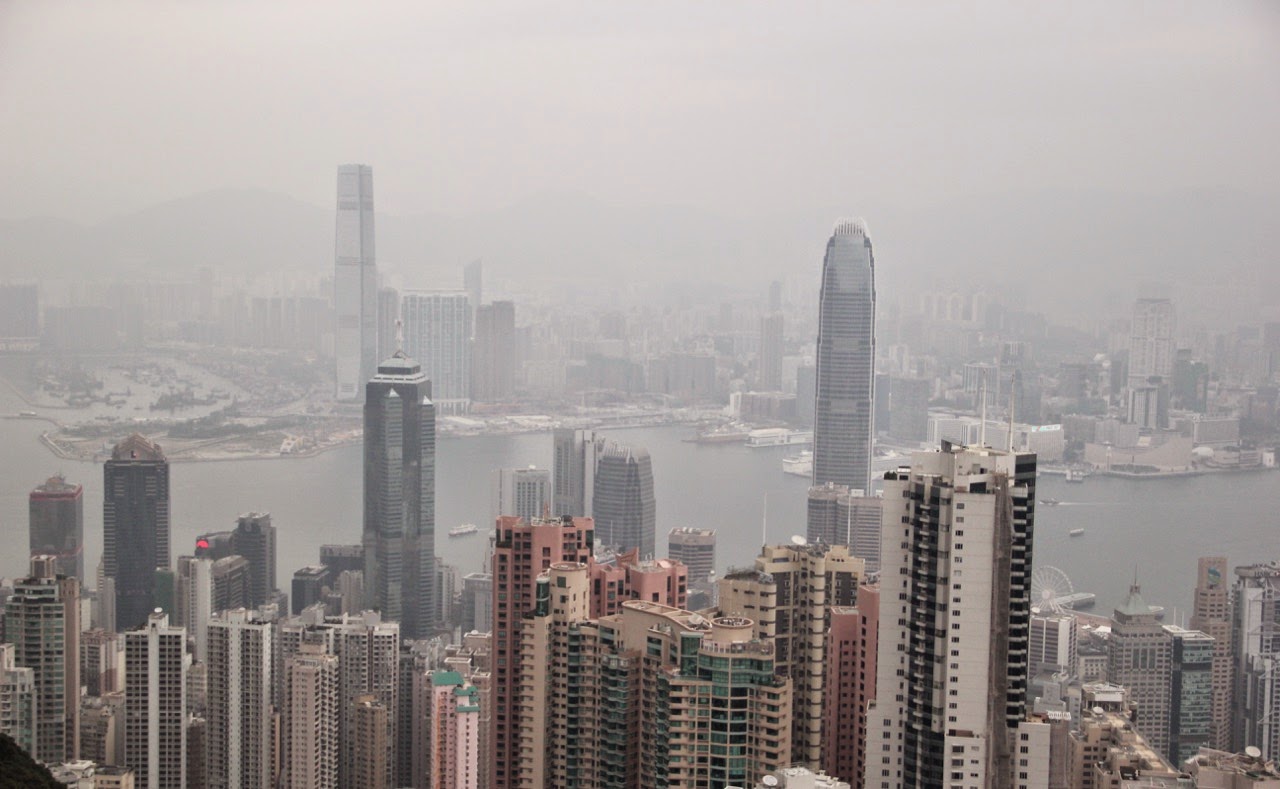 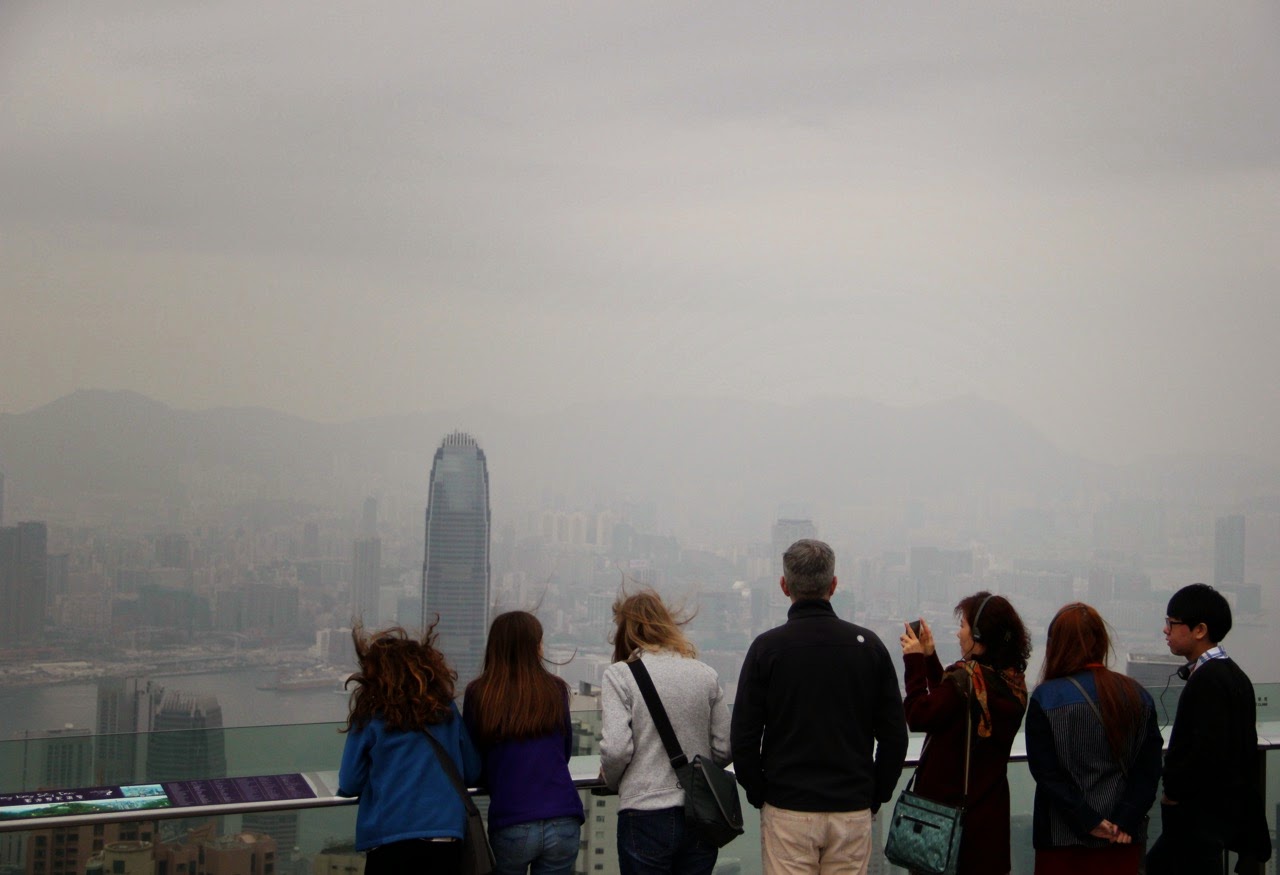 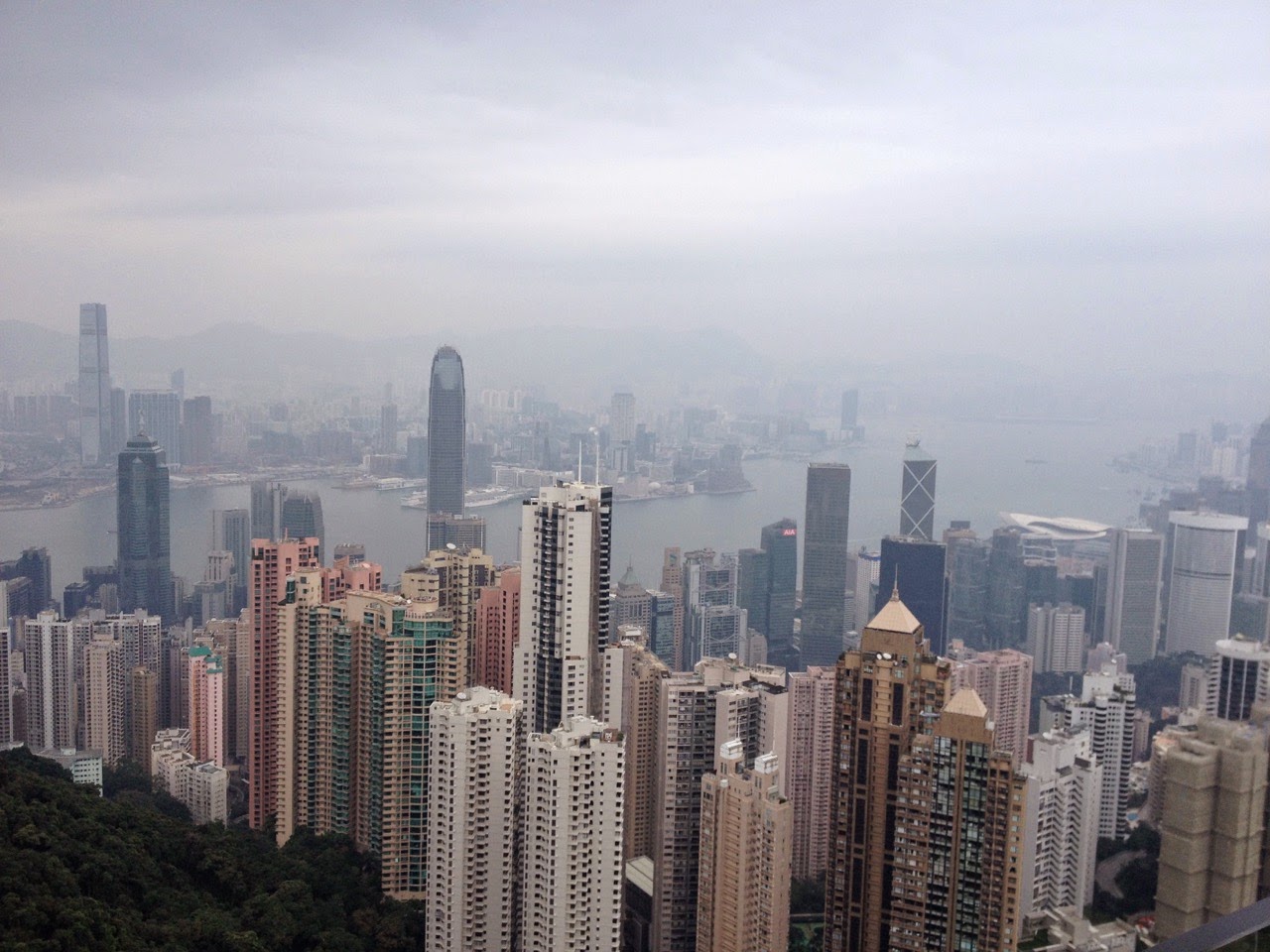 The mall below has some souvenir shops and restaurants. We grabbed some quick lunch at Starbucks where we could find some Vegetarian sandwiches.  While returning, we took the tram. Its just an 8 minutes steep ride as compared to 30 minutes by bus. However, the price is much higher in tram HK$28 as compared to HK$9 in the bus. 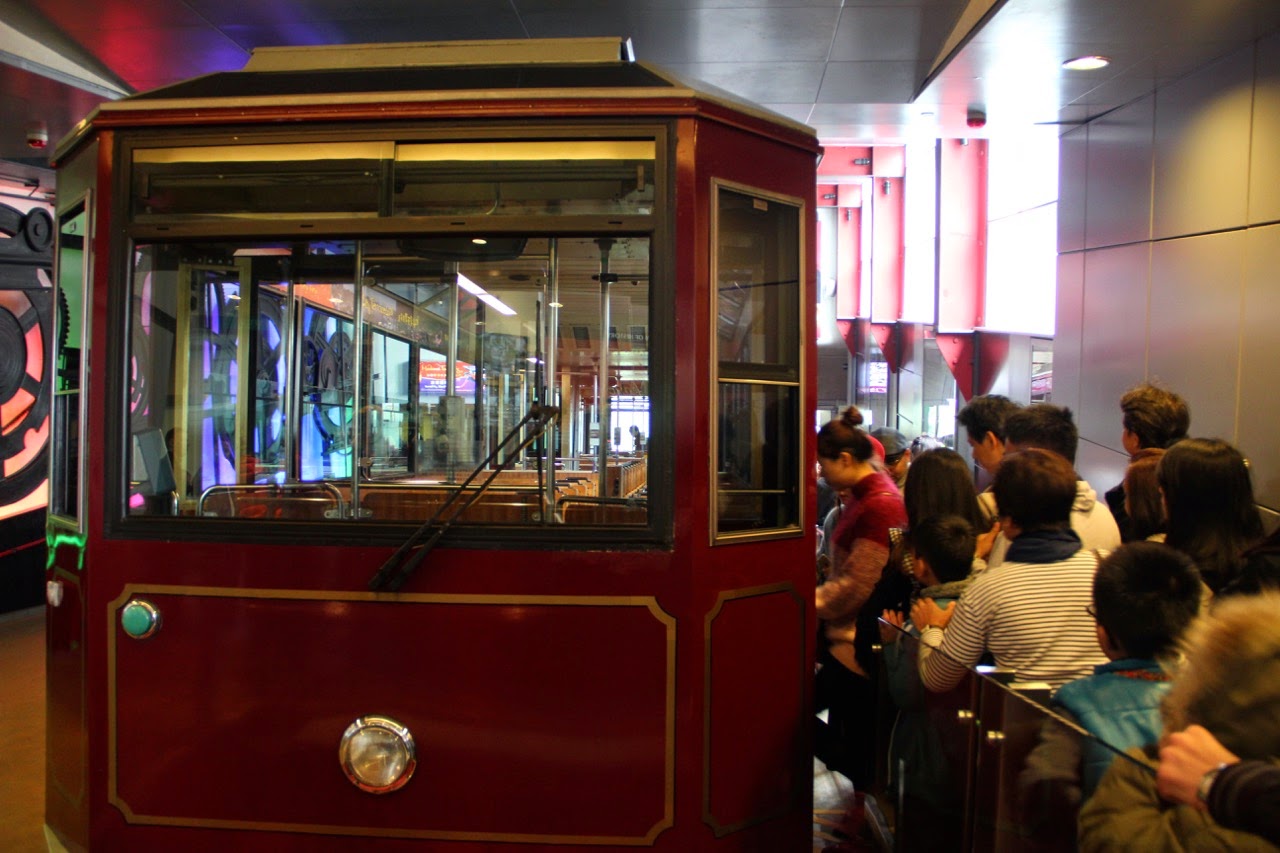 After some meddling with google maps, we finally got the bus stop on Queensway from where we took bus number 101 to Hollywood terrace street. Here if you climb up the stairs, you shall get to Hollywood road. Man Mo Temple is right at the end of the stairs. You could smell incense sticks from outside. There are several coil shaped incense sticks hanging from he roof creating a very mystic atmosphere. The temple is rather small though. God of literature and war are both worshipped here. Apart from a lot of tourists there were a few locals praying. But they seem undisturbed by our presence and photography. 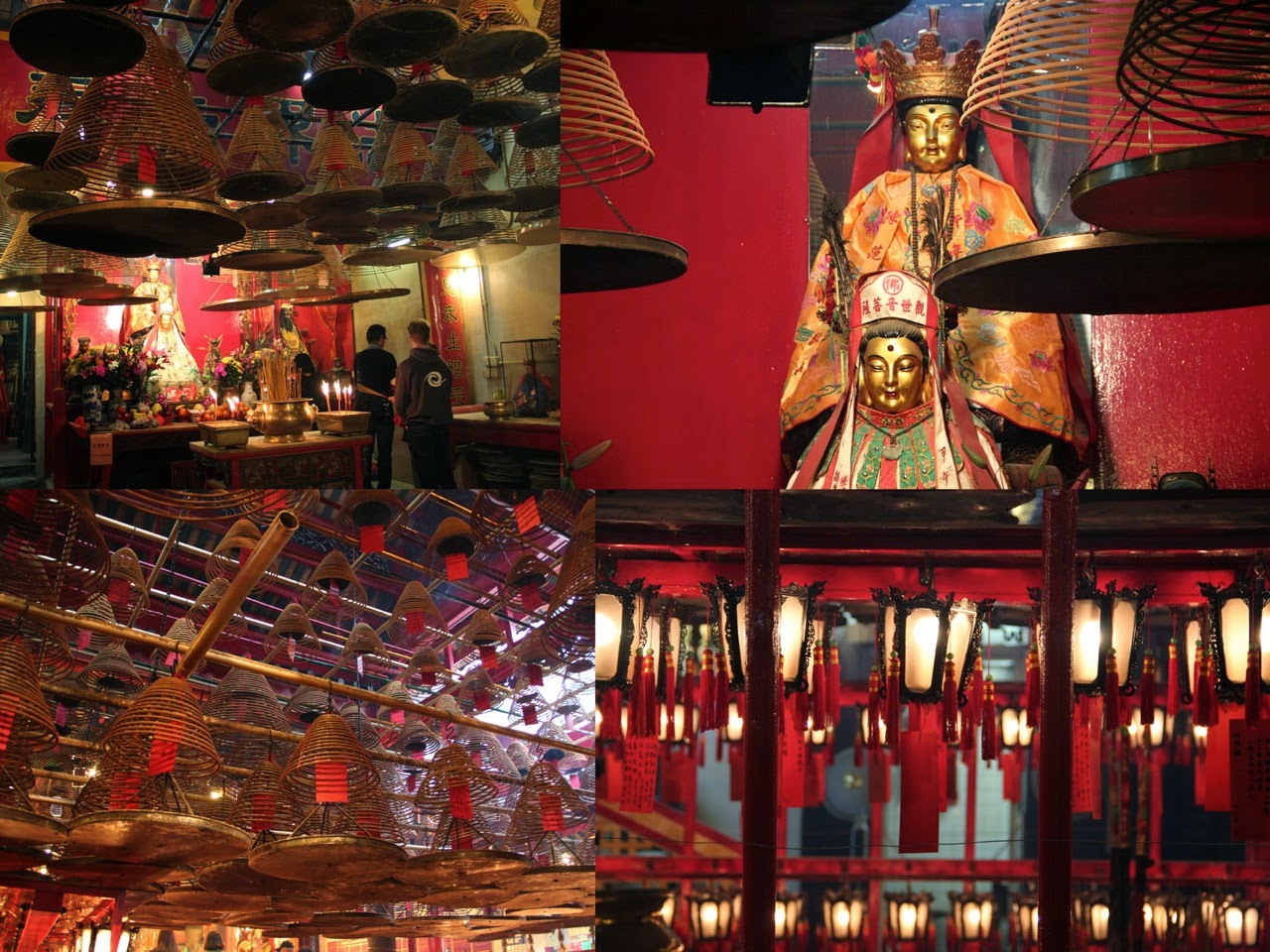 Lonely Planet book that I was carrying, suggests some walks around certain areas. I decided to take the one suggested near Sheung Wan. We started by walking on Des Voeux Rd West observing the dried seafood shops of which there seems to be plenty everywhere in HK. 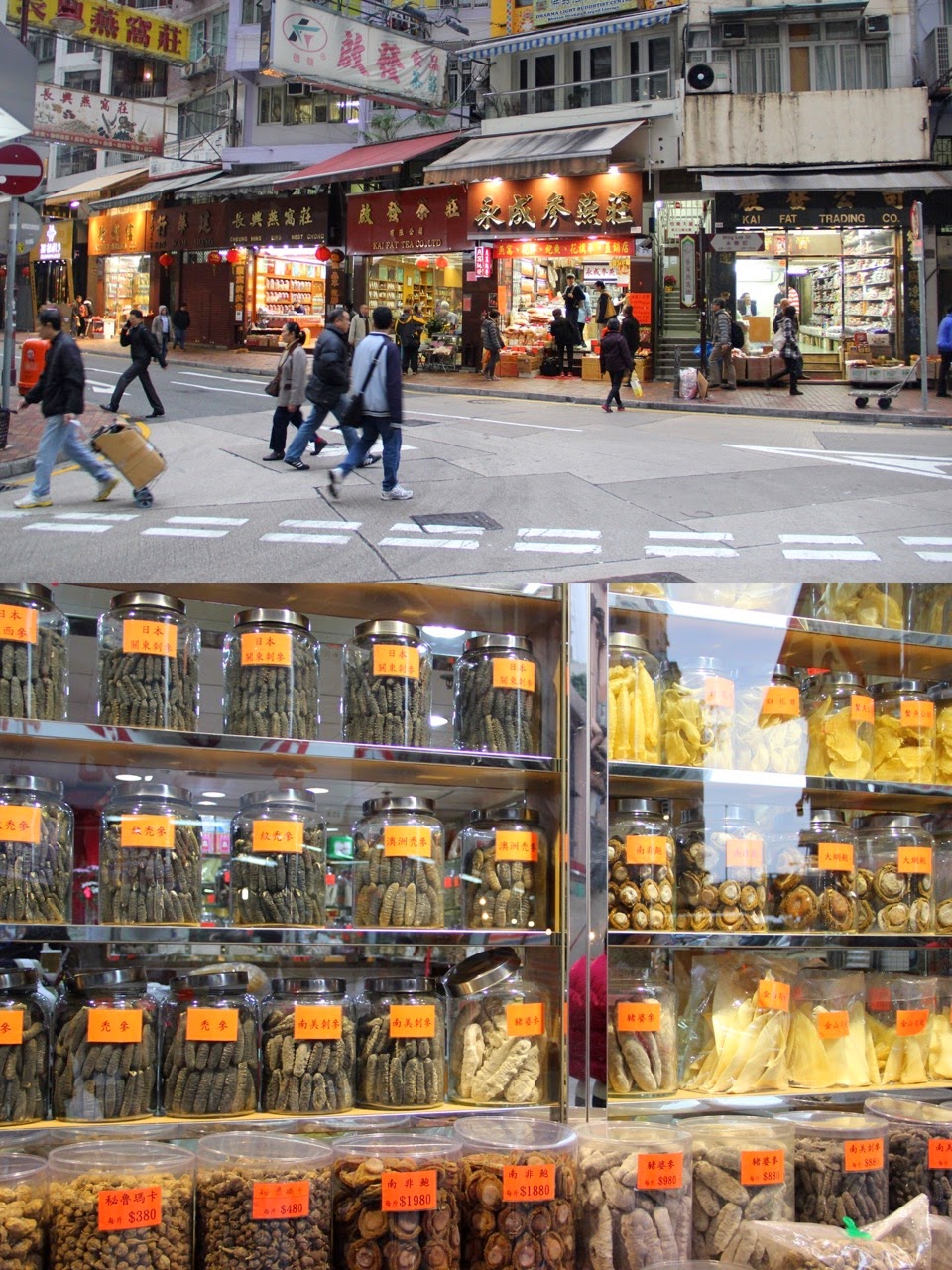 We passed through streets full of herbal-medicine traders and then ended at one of the streets that has several temples in it. However getting here might be a trick.  As you climb up possession street and reach hollywood road, take left. On your right you shall see Upper station street. take that up and you shall see temples on one of the cross roads. One of which includes Kwun Yam temple. These temples are less crowded. Here, we watched the locals discussing astrology, packing a powder similar to kumkum and an old lady working on a calligraphy. None of them seemed to be affected by our presence. Their undisturbed behaviour sometimes would make me feel bad and wonder if it was their tolerance or indifference. 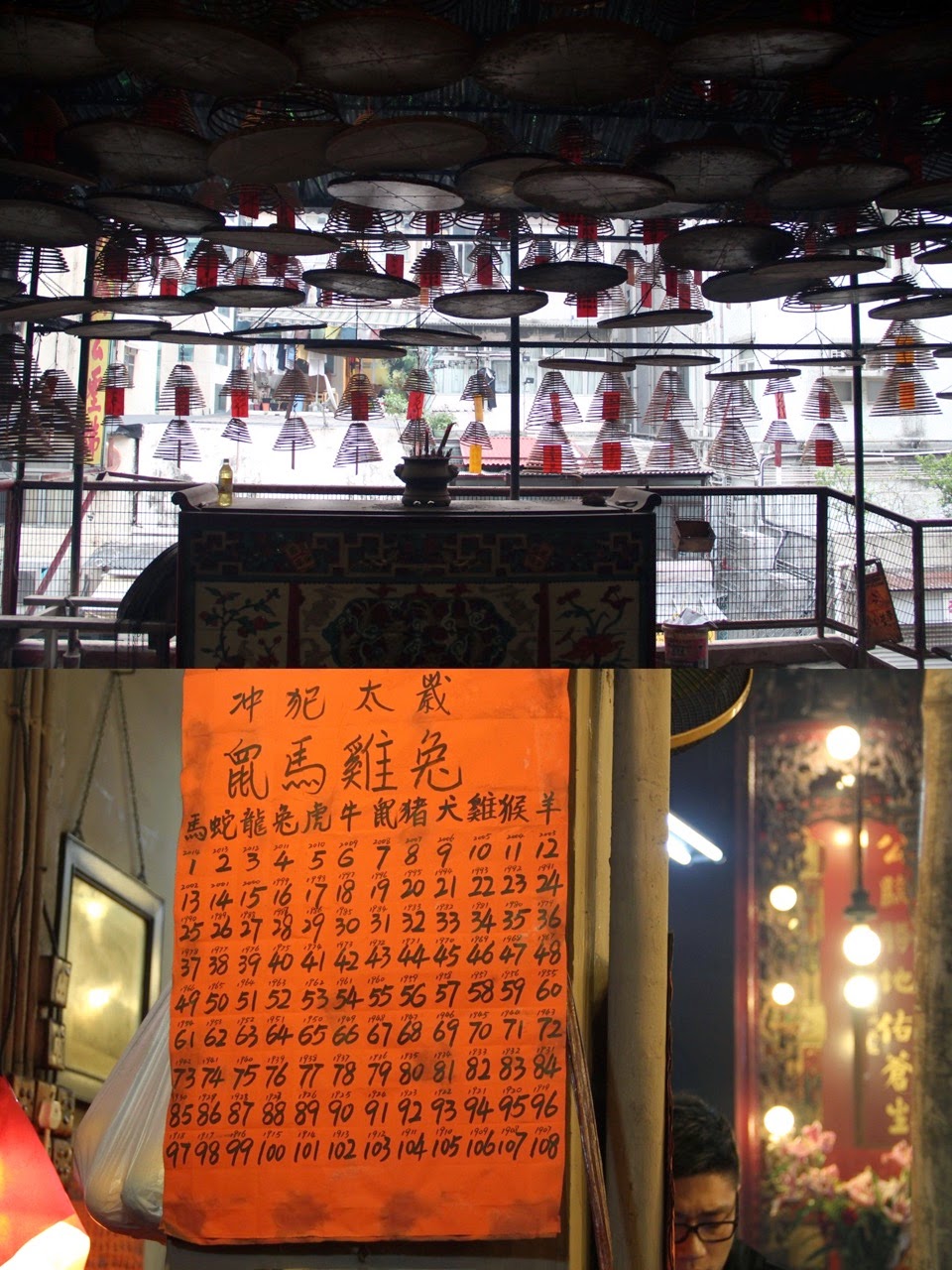 The display of incense sticks was amazing in these small temples. 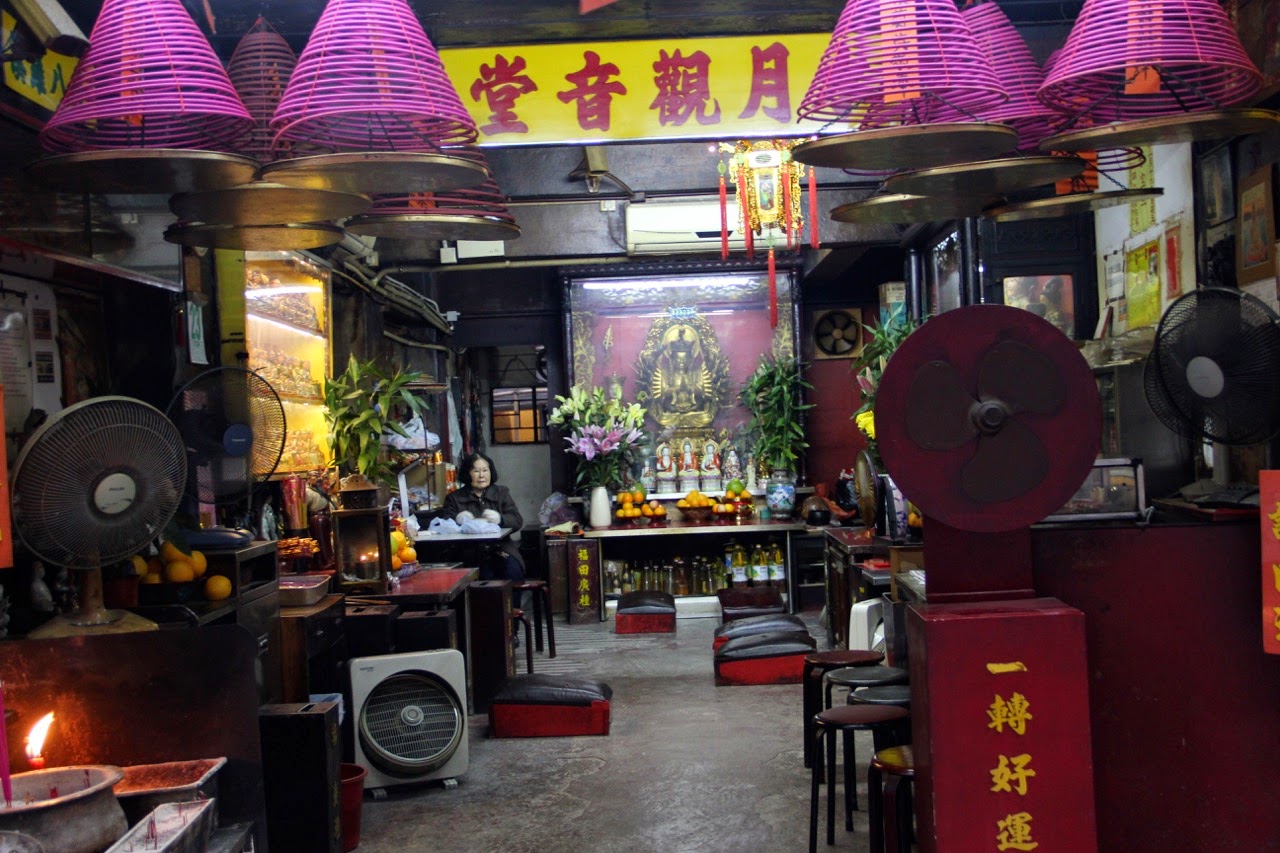 On our way back we stopped at the Hollywood road park where a bunch of old men where chatting very loud and a group of turtles were stacking up over each other. It was good to see some normal life outside of the metros and city. 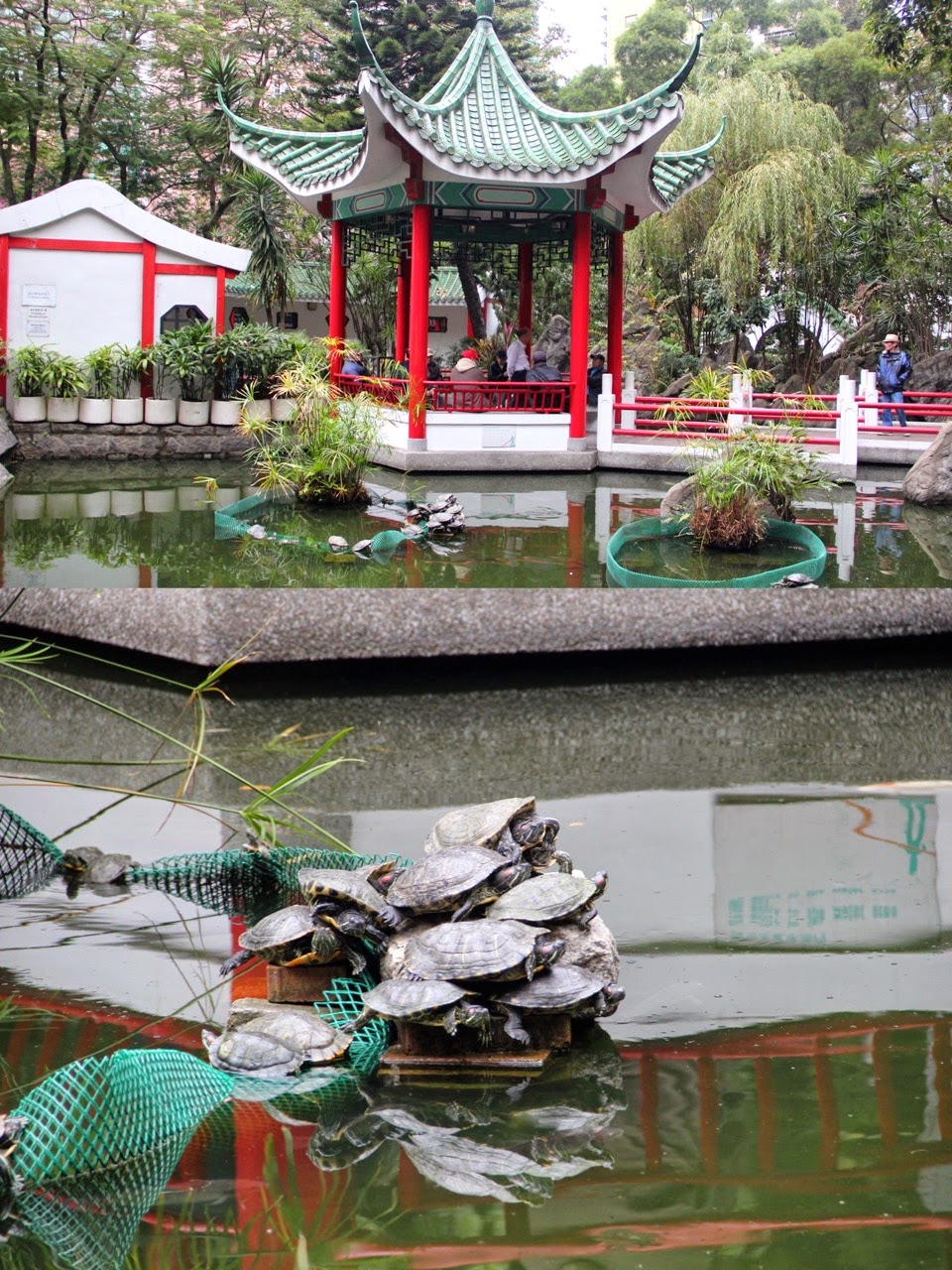 We then took a tram to IFC mall. Trams are the coolest mode of transport in HK island. They are slow but very inexpensive. HK$2.3 from anywhere to anywhere. You can drop change or show your Octopus card like anywhere else. Its always interesting to see several trams twist and turn as they follow the rails. 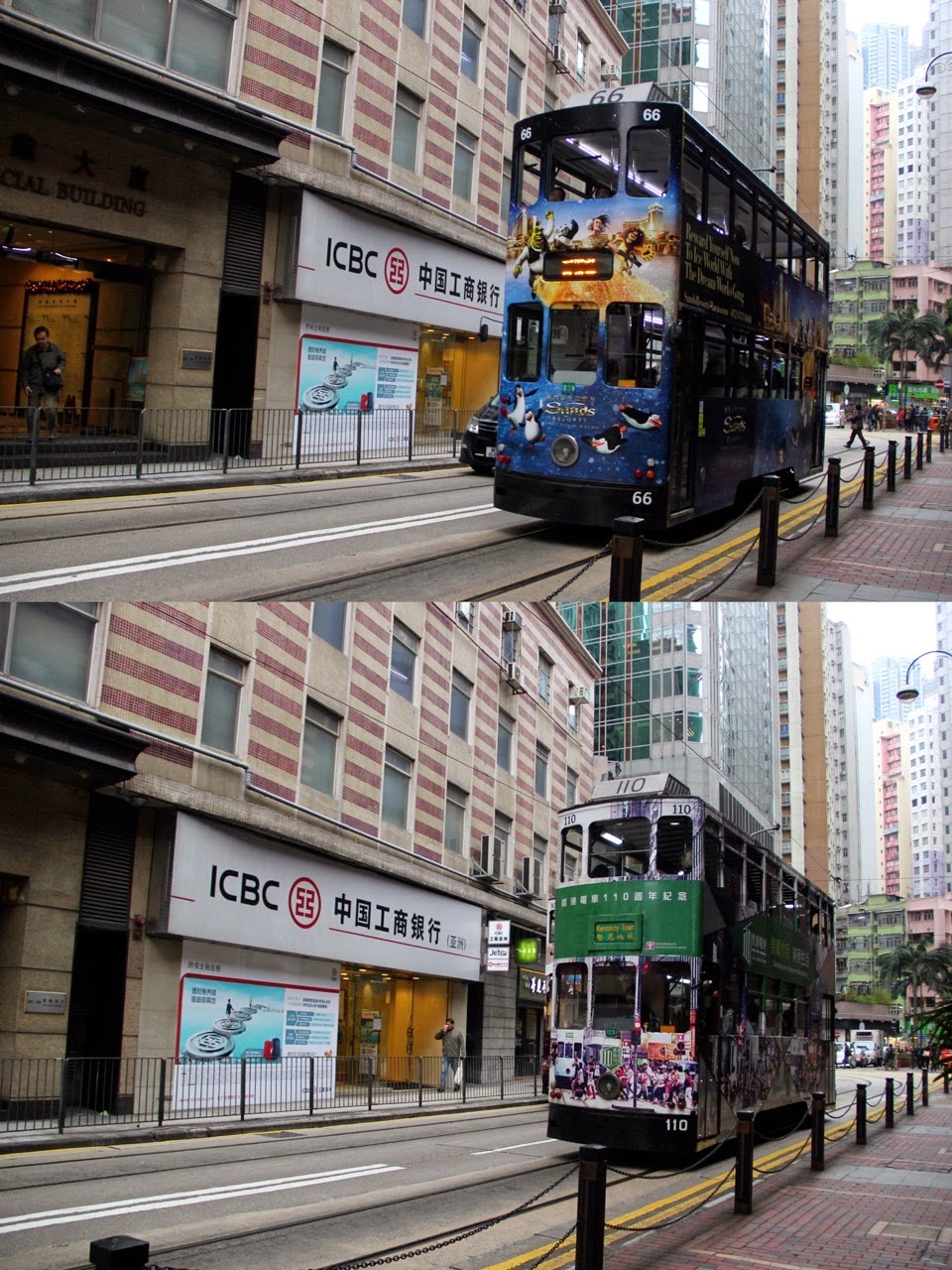 IFC mall is one of the biggest in HK and they have two towers. One could find all expensive brands here. After some window shopping at the mall, we took the ferry back to Tsim Sha Tsui in the Kowloon Peninsula. By now the buildings where illuminating slowly one by one. Kowloon, though less dramatic than the other side, looks amazing too with all the lights. 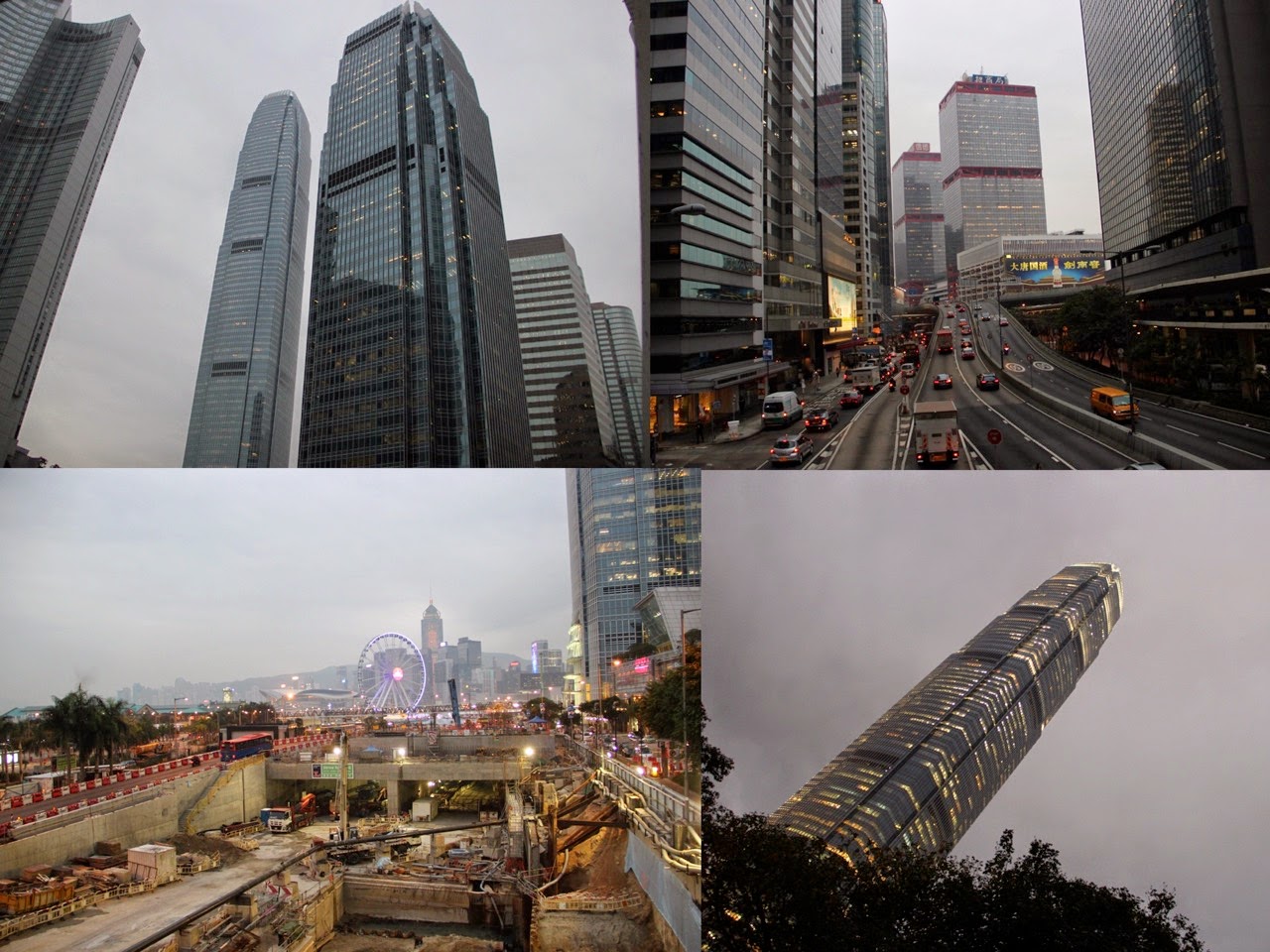 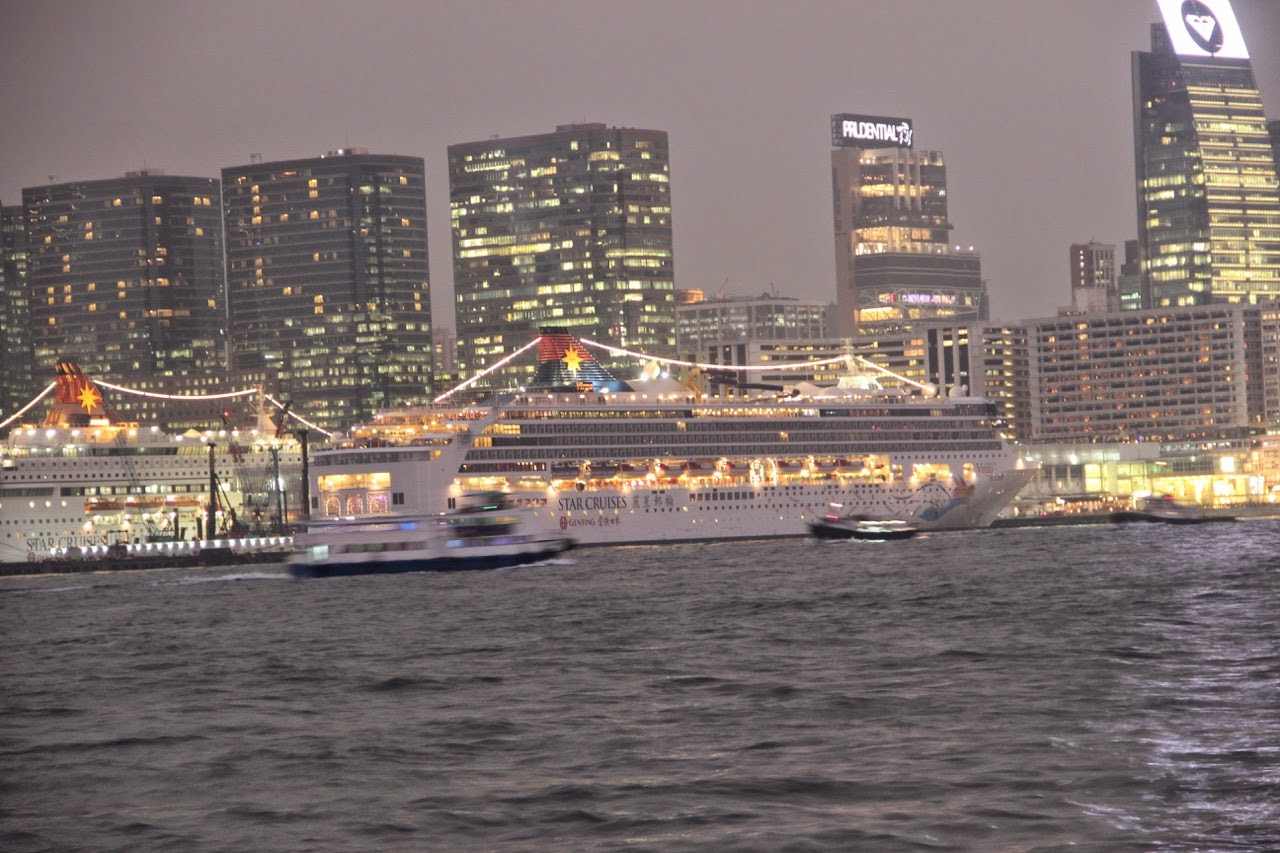 We headed back to the hostel and took MTR from Tsim Sha Tsui to Sham Shui Po. During these busy house, the MTR is generally crowded. However, its not like one might see in Mumbai trains. Whatever may be the crowd, there seems to be no body contact. No matter whatever the hurry is or the crowd is, everyone follow rules. They let the people to walk out of the train first, they follow queue system; specially the younger generation. I did not see young people act stupid like I have in India or even in the US. They are highly disciplined.

After relaxing for a while at the hostel, I headed to Mong Kok to meet Stefan who had crossed border from Schenzen for some Christmas shopping. Kong Kok is flooded with electronic shops and people. One of the most interesting things here I found was going into some of the shopping complexes. each floor has some 10 or 12 shops all in a 10X10 ft room. So you can count around thousands of shop in a building. It was amazing how such a small shop survived. But the young buyers seemed to know exactly what they wanted and where to go inspite of these tiny shops not having any boards of publicity outside the complex. Perhaps they had sold some custom products that attracted crowd instead of the publicity, i thought. I also wondered where all the money came from to do so much buying. Stefan was looking for a particular shop in one of these building but had forgotten the location. So we got into the 20th floor and walked all the way down till 13th floor, checking every one of the floors in between. Sadly, we did not find the store so we headed back. 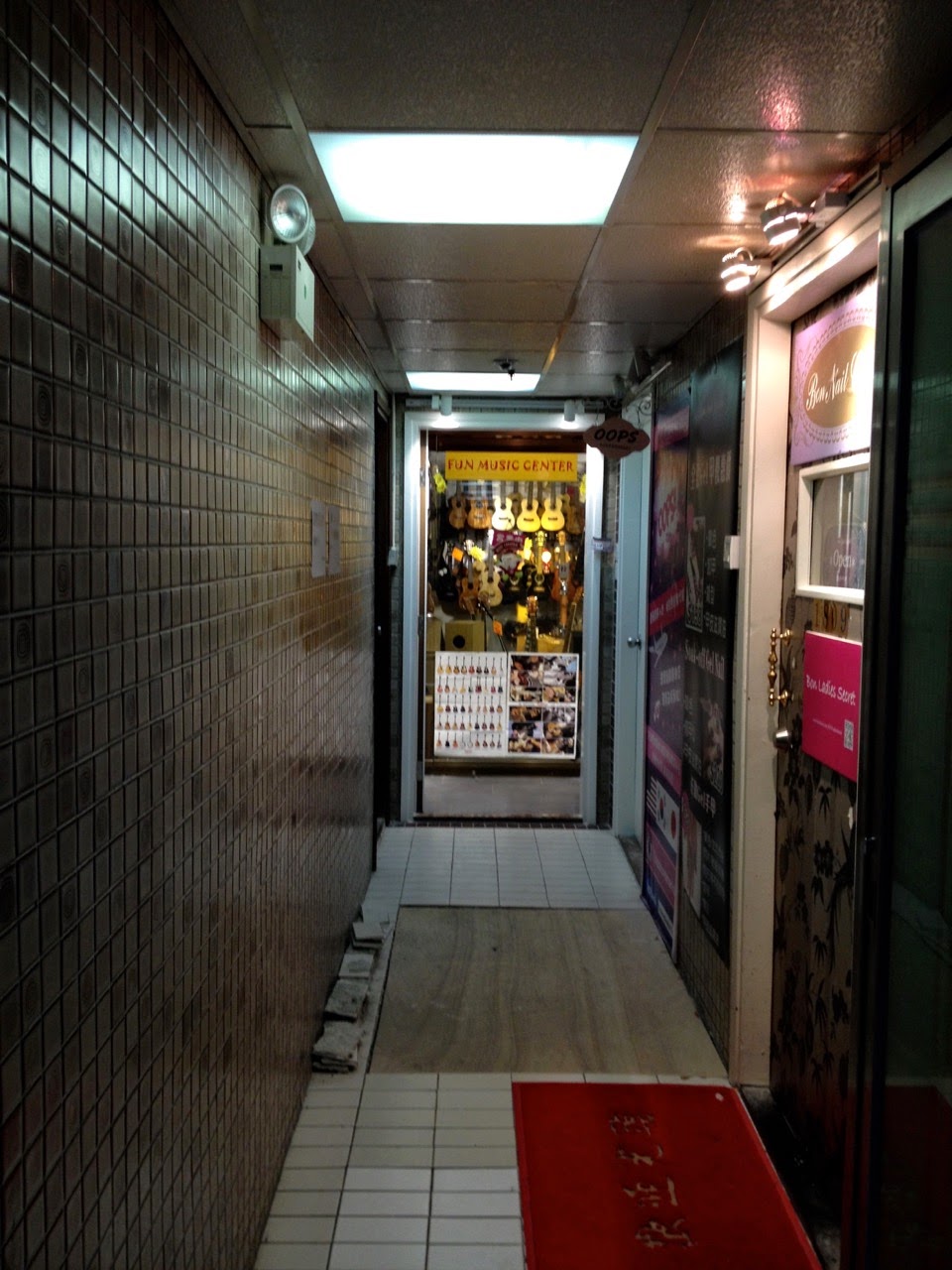 On our way, we also saw some people with the yellow umbrella protesting for a democratic government. An old man seemed unhappy with them and screamed angry words at them. The protestors ignored them. Stefan told me about the last day of the two month long protest. When the court ordered to clear the protest area, the protestors, who were mostly students, made sure to through every bit of trash into the trash can before leaving. Very impressive!

Stefan and I walked all the way from Mong Kok to Sham Shui Po where he took a bus back to Schenzen and I walked to my hostel. Another long day had come to an end with lot of excitements. And I looked forward for more.