Next morning, we were ready by 6:30 AM and we made a move to Uravakonda. Light drizzle slowed down further the activity in the town that was just waking up. But we had to get back on the road and head further away from where we had come. 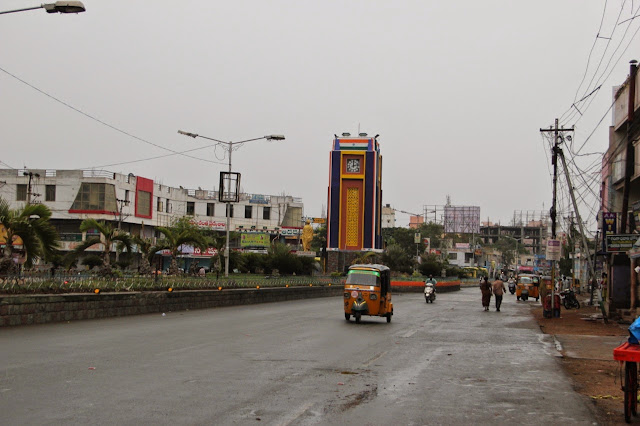 On our way, we stopped at a small road side shop for breakfast. The hotel is run by a lady in her late 50’s. She offered us seat and slowly moved on with her work to prepare the chutney as the idli’s were getting ready. She seemed in no hurry at all and our waiting did least to speed her work. She seemed to calculate and do every move without haste and lot of confidence. She reminded me of my aunt Jayashree who has a balanced and calculated approach to cooking. We tasted some soft and hot idlis and a delicious chutney. When asked about her secret recipe,  she told us that she used idly rava (1 cup) instead of rice with urad dal (1/4 cup). And for her special chutney she seasoned them with roasted onions and curry leaves. Yes, roasted until they are black and crunchy. We had some coffee as well and thanked her for her delicious breakfast before continuing our journey. We shall always remember this breakfast to be one of our special ones had outside of home. 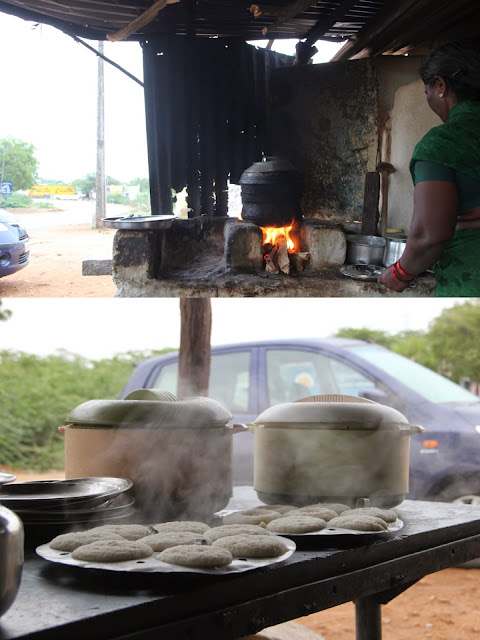 At Pennahobilam, near Uravakonda is the Lakshmi Narasimha Swamy temple. The morning was very peaceful. 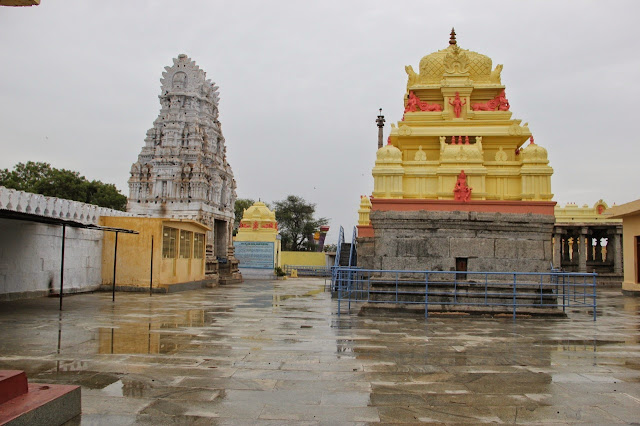 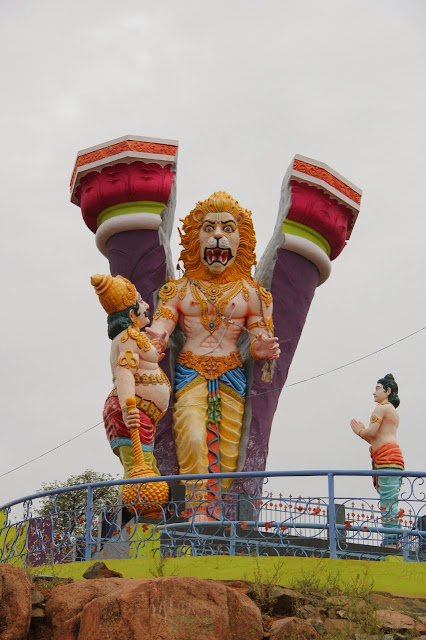 Our next stop was at Budagavi. You have to drive straight without taking right deviation to Uravakonda and in about 5-10 kms you shall reach Budagavi village. Here is one of  the three surya temples of our country. A small temple with an idol of Surya riding his chariot with seven horses in the main sanctum is a visual treat. 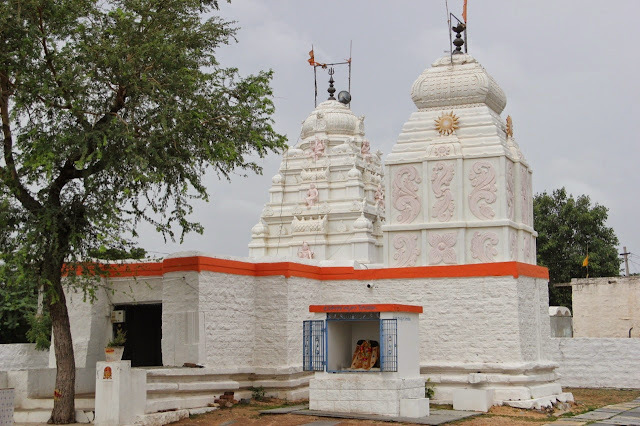 We came back to the bypass road and took a different route to Gooty via Pamidi instead of originally decided Guntakal route.  This route took us to the remote villages in the district. At Pamidi, we visited two temples in the same compound (Bhogeswaraswamy Temple  and Sri Laxminarayana Swamy Temple). Approach to these temples is via narrow unclean streets of this town. It is believed to be built by the Cholas and one could also find a sasan carved on a rock written in Pali language. Here we met a middle aged lady who spoke to us for about 10 minutes in Telugu. We could only reply in Kannada yet an understandable communication continued. 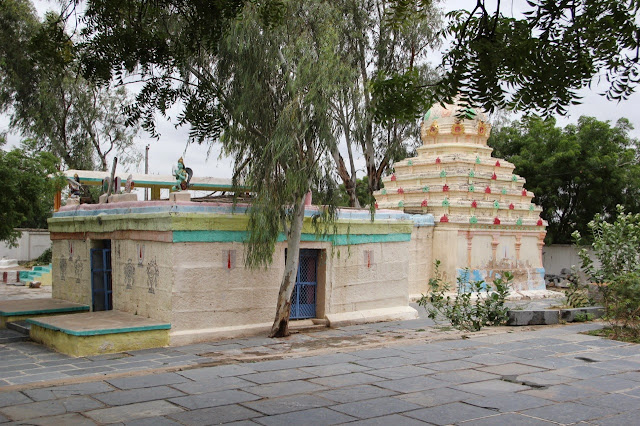 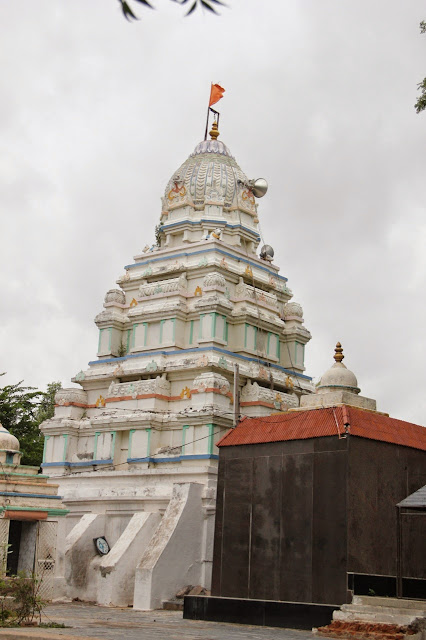 We stopped next at Gooty. We directly drove to the fort hoping to drive up just like we did in Penukonda. The roads are not motorable. You could try to ride a bike at your own risk. Seeing that it was very high and the sun was already atop our heads, we decided to skip the trek as my mother would have found it hard. So instead, we took a short walk around the British cemetery at the base of the hill fort. It was interesting to see that several British officials and their family were buried here; so far away from their homeland. Some of the writings on the graves were interesting. 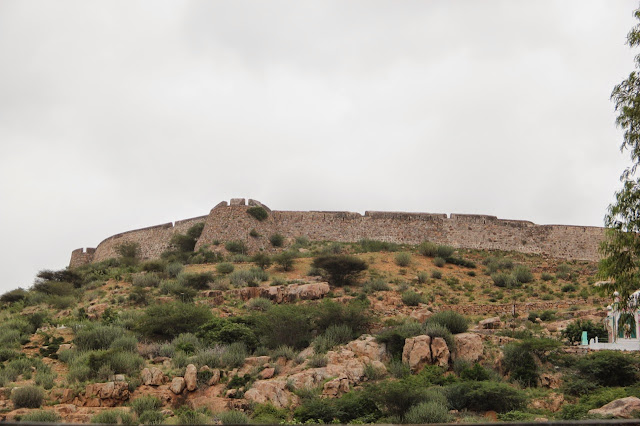 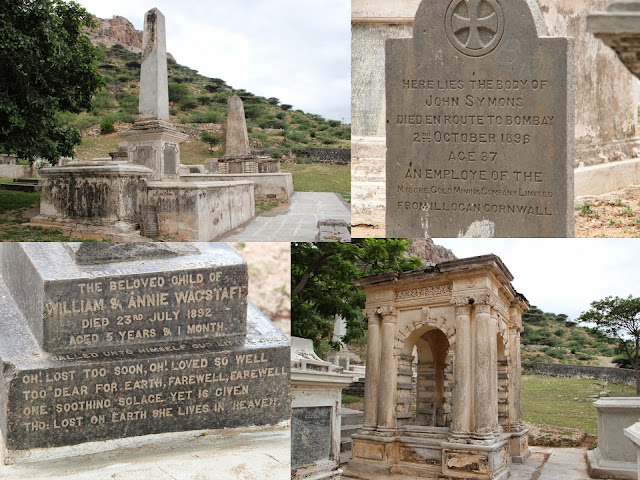 We had a quick meal in a restaurant at Gooty and decided to drive to Yadiki. Before reaching Yadiki, if you take a left turn it leads to a village called Kona. Here we hoped to visit some caves. But when we reached the place we saw that it was deserted. Fortunately after some time of driving on deserted area, we found a house of a Kannadiga from Bagalkot who had settled there. He told us that to visit the caves it would be a few hours trek up the hills and that it was dark in there. Disappointed, we decided to return but not before stopping at this beautiful lake where we relaxed for a while. Here we observed the villagers washing cloths and a shepherd having his meal - Rice mixed with raw goat milk. 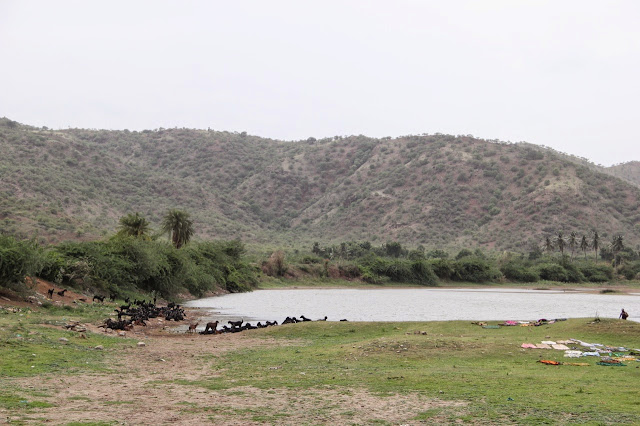 We then drove to Yadiki and visited Lakshmi Chennakeshava temple which was about to be closed. They held the doors open for our darshan. 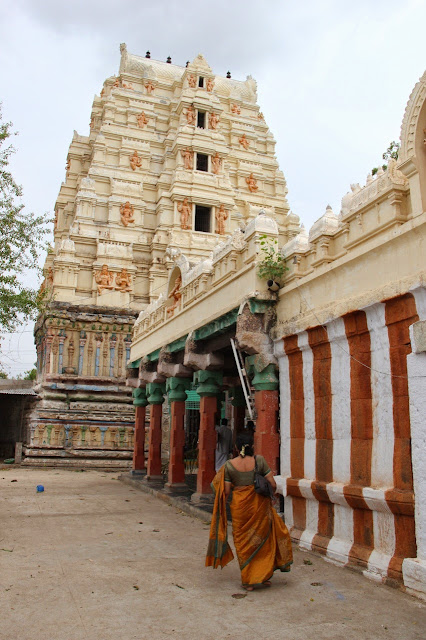 On our way to Tadipatri, we saw this beautiful temple of Chennakeshava in Chukkaluru. We stopped for a quick visit to view this interesting work of  architecture. 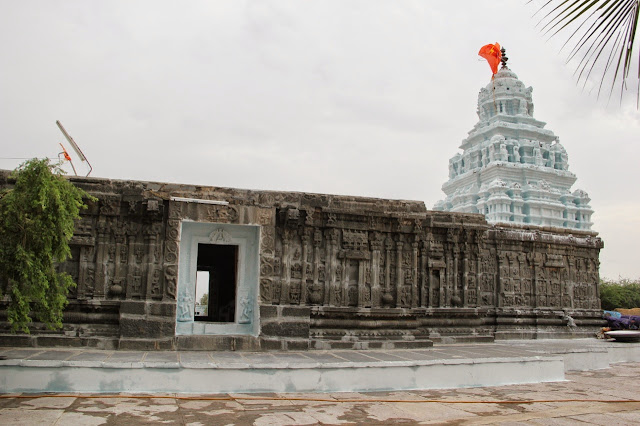 Tadipatri is a small town and as we entered the town I enquired with a Marwadi store boy about a good lodge to stay in. He suggested Maruti lodge. So we began searching for it. We made three U-turns on the main road but never found it. Everyone we asked pointed in the opposite direction. Finally we found it; a pink old building with no windows, almost ready to crumble down. So staying there was out of question. We parked the car near the main road and checked in at Kanchan lodge that looked fairly okay from the outside but wasn’t any from inside. But we had no choice. We quickly freshened up and stepped out to explore the town. We followed narrow streets to reach the Chintala Venkataramana Temple. In midst the busy streets its Gopura seemed to reach the sky.

The outside of the temple compound gave a feeling of a public park as many spent the evening there relaxing and playing. 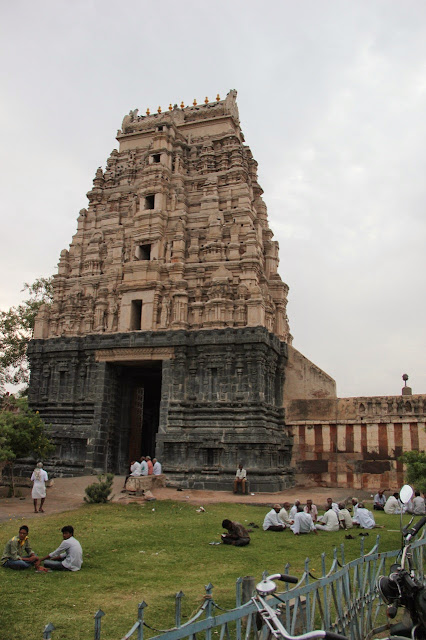 The temple is magnificent with several neatly carved pillars. These photos would speak for themselves.

While I was taking pictures a guy came to me claiming that he was from the temple authority and checked if I was taking pictures for a newspaper and if so i could not do so without permission. When I said no and told him that I was doing it as a hobby he left with still some uncertainty and dissatisfaction on his face. 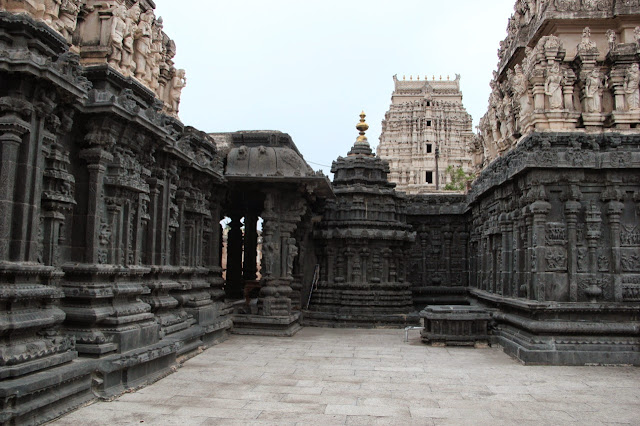 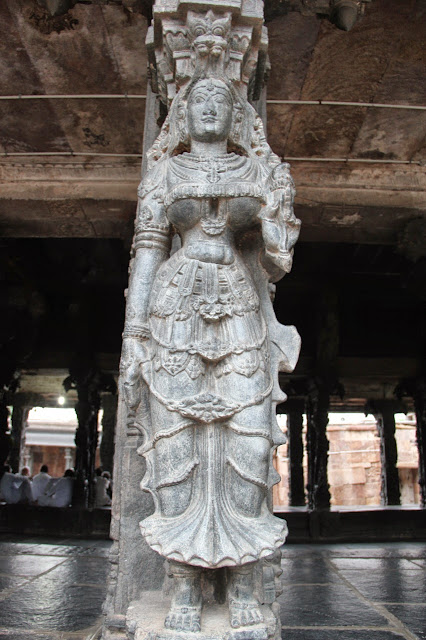 A kilometer or so away from here is the Bugga Ramlingeshwara temple. According to local legends, the two temples were constructed by two brothers in a single day. Legends also claim that while the former temple was completed, the second was not. Had the temple been completed, it would have turned the place into Kaashi of the South. The architecture of these temples are influenced by the Vijayanagar architectural style. 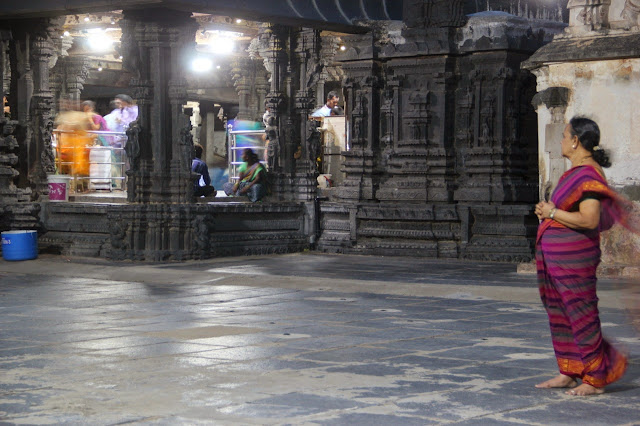 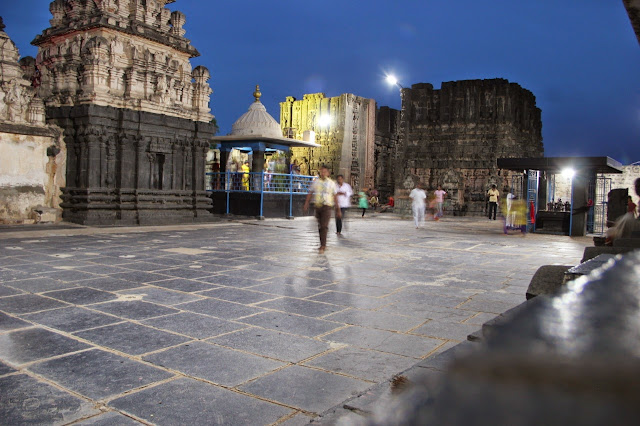 We relaxed for a while at this temple. The wind blew furiously here like in a  sea shore which was surprising. Since our leg hurt from a lot of walking during the day, we decided to take an auto back to the hotel. We had dinner at a small restaurant near by before retiring for the day. 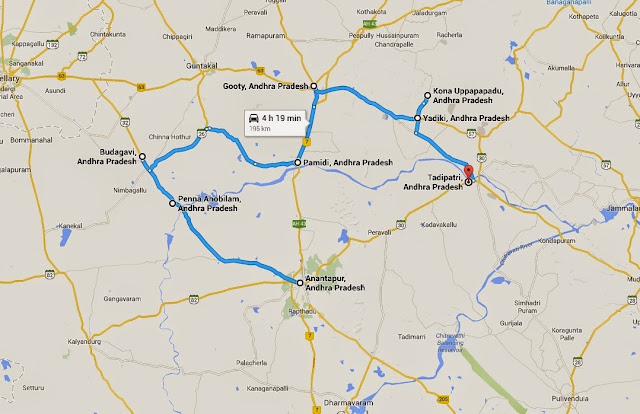