The water is still over flowing from that freaking tank and seems like everyone in the main house is either dead or unconscious. I wake up and go to the Dambulla cave temple. The place is filled with lot of Buddha idols. I think, I have seen enough Buddha idols for now that I could give a miss to few. The paintings on the roof of the cave are rather unimpressive and are more liked cartoon. But the climb was nice as the sun rose up on the sky. 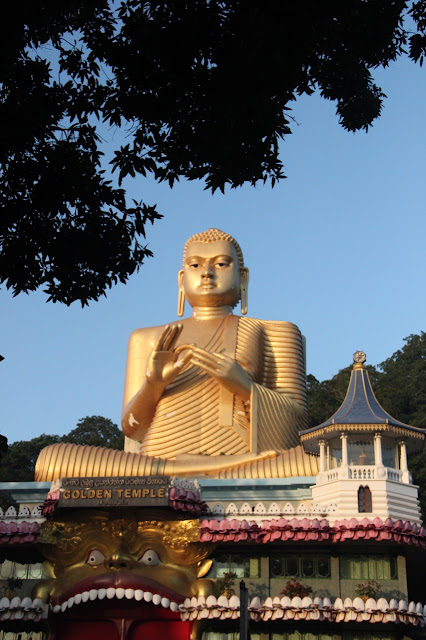 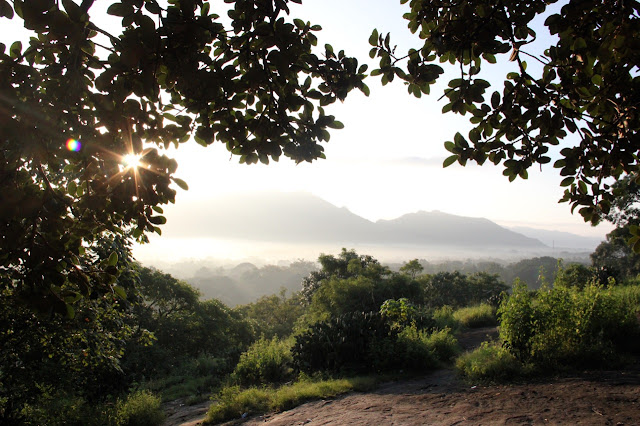 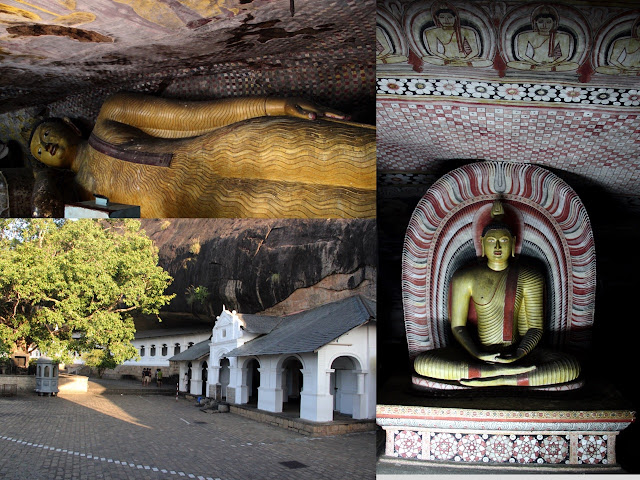 I return back to the hotel and get ready to leave. The water tank is thankfully not overflowing anymore. I go to the main house and see the man sitting beneath his bed. When I call him, he sways and approaches me still drunk and asleep. I ask him where his wife and child were to which he says they have gone out. Unwillingly, I hand him the balance amount and leave. On my way out he stops me and asks - "Are you from Kolkatta?" I say no with a surprise and walk away. I wonder why he asked me. I learn later that all sinhalese are descendants of people from West Bengal. Prince Vijaya was banished from his kingdom and he with his followers came to Sri Lanka and married a Yaksha tribe princess and set up a kingdom. All Sinhalese are from West Bengal and all Tamils obviously arrived with Chola from Tamil Nadu.

Before heading to Kandy, I stop at a Painting conservation museum. The curator Manoj has worked in Dubai and can speak Hindi. He explains to me that all the murals from across the country are recreated by an artist. It is impressive to see them so real. They resemble a piece of rock from a cave.

I take a bus to Kandy. I contact a couchsurfer Josh who is traveling in Kandy and learn that there is room available at the backpackers hostel he is staying in - Clock inn. I request him to inform the reception about me and he does.

Clock inn is one of the best places I have stayed in. I choose a dormitory and its fairly economical. They also have capsules on the terrace. The reception has a picture of François Holland. I ask the Tamil speaking receptionist why was it so and he tells me that this place is linked to the French consulate next door.

The lake is at a walkable distance from the hostel. I have lunch at a restaurant first. The server here is particularly nice to me. He helps me understand what a wood apple is and I try the wood apple juice which is sour in taste. When people realise that I am not speaking Sinhalese they ask me if I am an Indian. The customers on the next table ask me - "Are you India?" I nod ignoring the error in the question. They smile and get back to their food.

I walk to the temple of the sacred tooth relic (Containing the tooth of Buddha). It is terribly crowded as its a full moon day today. I am frustrated by the crowd and I feel like I am in one of those crowded temples of India. I make my way to the main shrine and take a glance at the tooth relic. 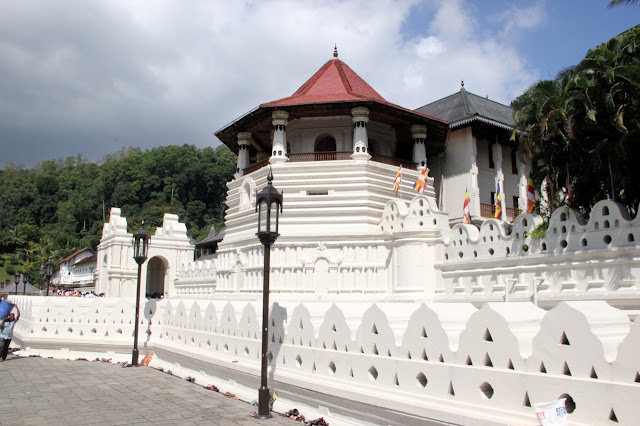 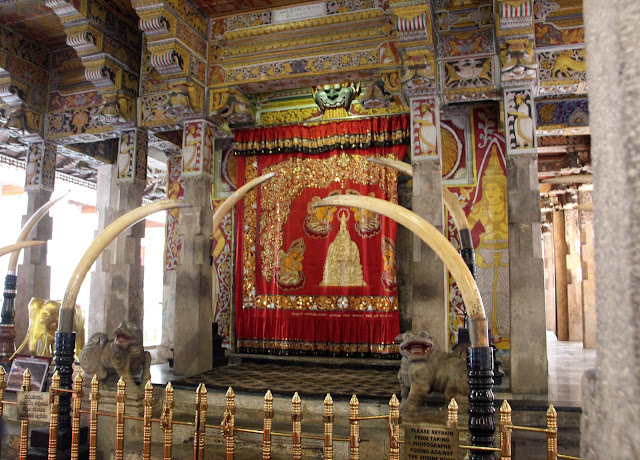 One of the favourite tusker is stored post its death here. 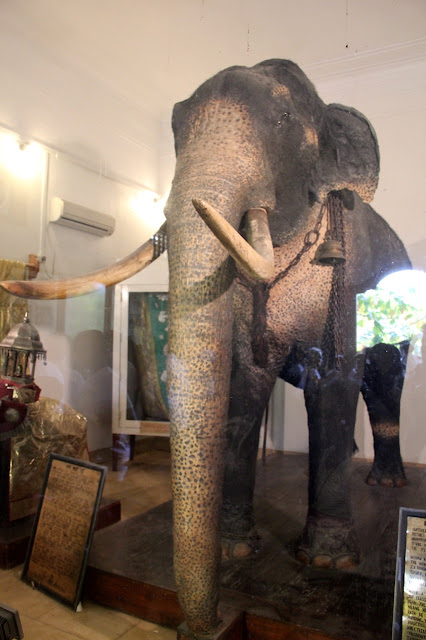 Just like the Jaffna library showing their ruined buildings, the Temple of the tooth relic museums show the pictures of the temple almost damaged by a bomb blast. The memories of war are still fresh in the minds of either parties.

The lake looks beautiful but the heat and crowd makes me want to walk back to my hostel. 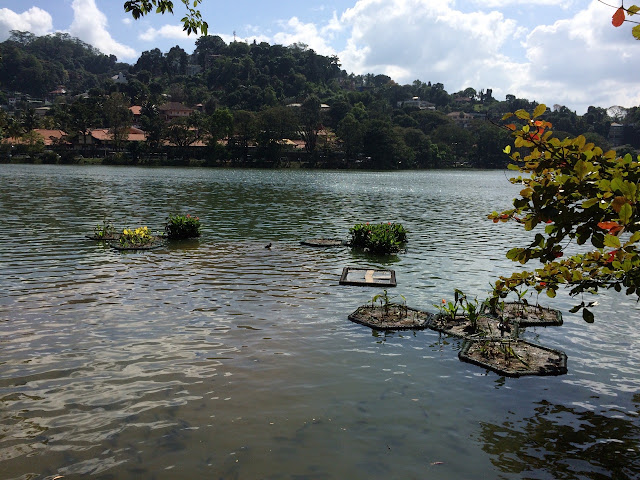 At the hostel, I meet Josh, an Australian solo traveler whom I had contacted through Couchsurfing. We chat for a while and then I take off again to see the Kandyan dance program. Just near the lake I receive a pleasant surprise - Roc and Lidia. They are happy to see me again and they too are planning on watching the dance show and like me they too are heading to the Adam’s peak next day. So we decide to do it together. I tell them that I shall buy my tickets and meet them at the show.

At Sir Bennet Zoysa hall, at the ticket counter I strike a conversation with an artist called Tharindu. He tells me that he has visited Bangalore sometime ago for a performance. He is an artist and has also learnt German. He invites me to is house after the show but I do not think I can fit that in today.

The show is for one hour and there are some really good music and dance performances. Magul Bera is the ceremonial drums and Puja Natuma is the puja dance; Raban is Tambourine, Naga Gurulu is snake and mythical bird dance. These are followed by tea plucking dance, Pantheru natuma, a mask dance, a funny joker dance, Peacock dance and finally the fire dance. I am totally impressed with the music and dance performance and it makes up for all the disappointment the crowd at the temple had brought me. 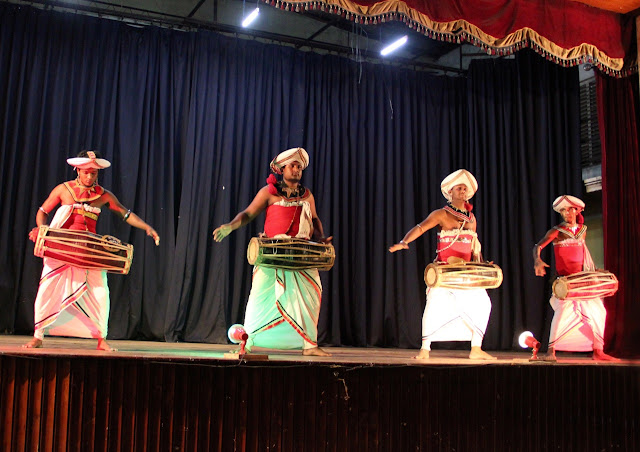 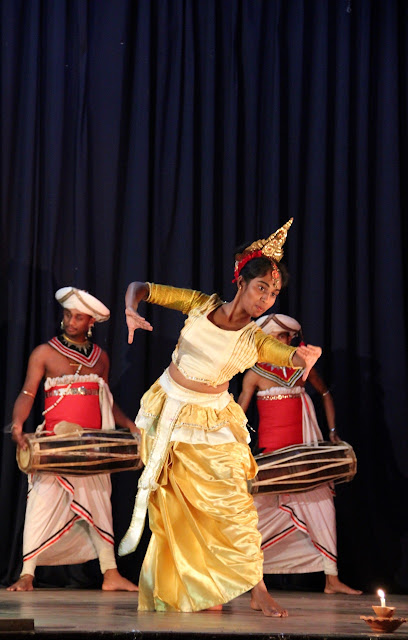 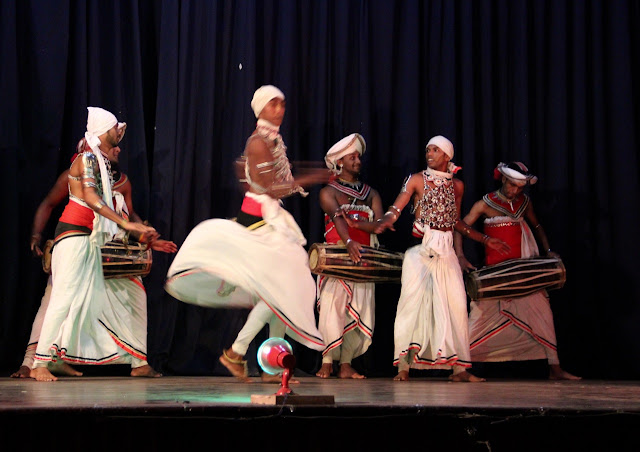 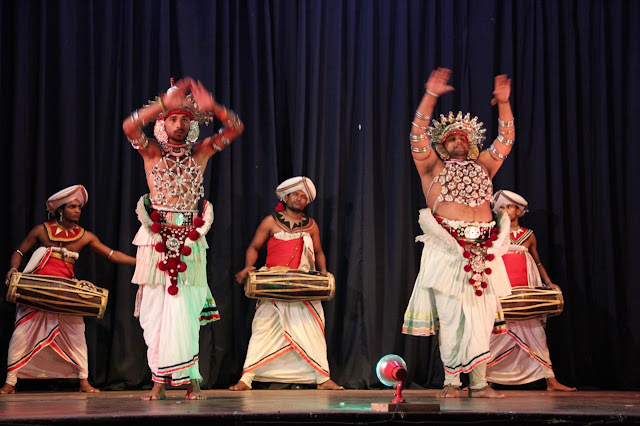 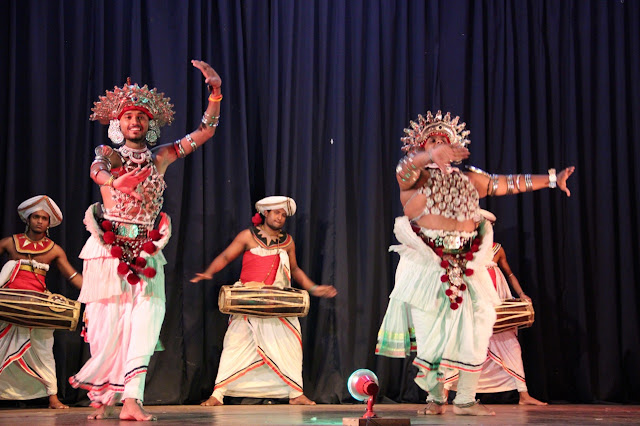 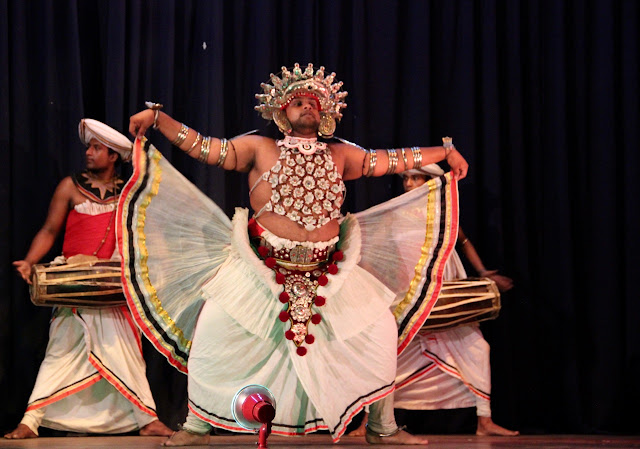 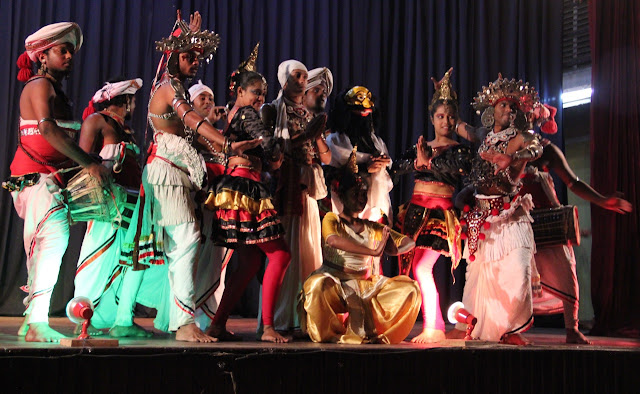 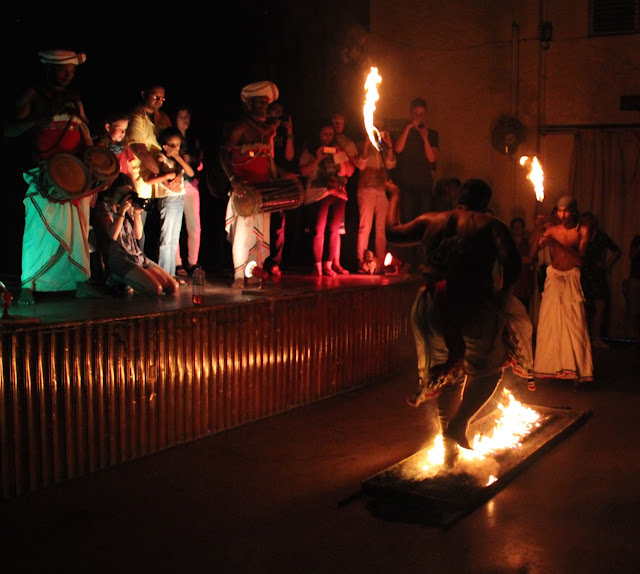 Roc, Lidia and I decide to meet the next day at bus station around 8 in the morning. The lights of the dusk play with the water of Kandy lake and create formidable impressionist painting like views. I begin to love the place. 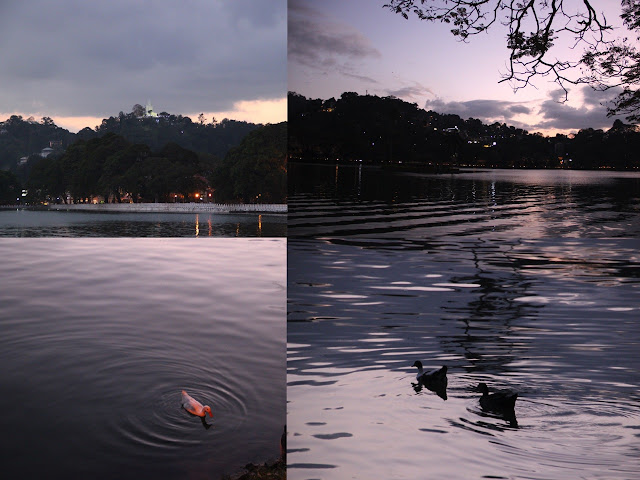 I take a walk by the shops on the building that houses Queen hotel. The walkway reminds me of Connaught place in Delhi. 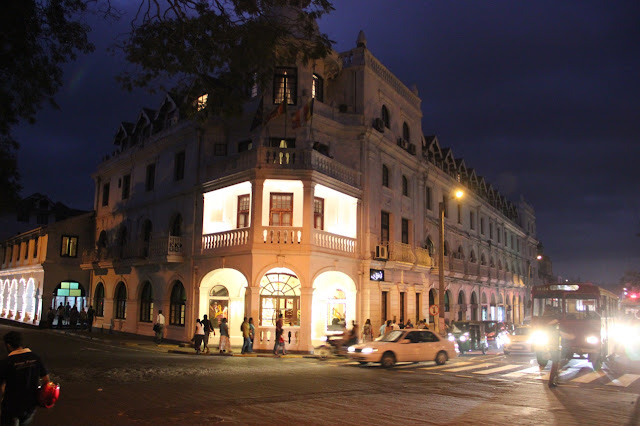 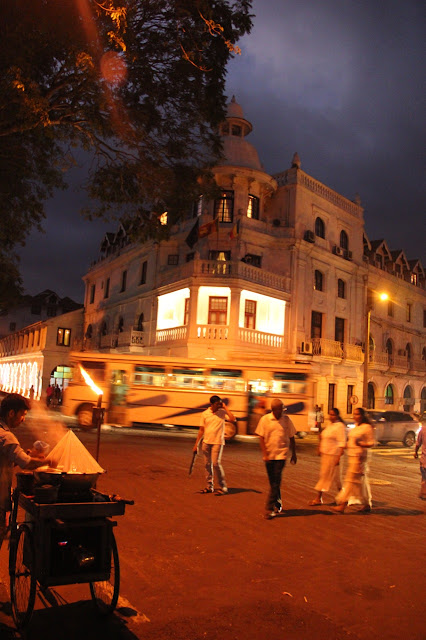 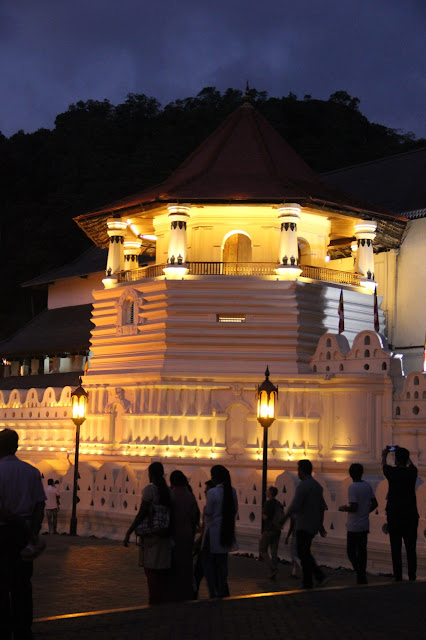 Having had rice for so long, I long for some Indian food and so at the sight of an Indian restaurant go there  and order some Chapathis. They are thick but I do not complain.

I return back to the hostel and tired go to sleep. Josh is not in the room even past midnight and I wonder if he has gone missing somewhere. Other travellers are sound asleep. Disturbance has followed me from Dambulla to here. At sometime before dawn Josh comes in with a girl. They cramp into the single bed. Their giggles and romance is really annoying. We generally perceive that the white skinned are better educated and thus cultured but guess not always. Who brings girls to a Dorm?