on September 16, 2015
My trip to Mumbai during this Ganesha festival was well timed to include an interesting range trek of two days tracking the old trade route from Lonavala to Bhimashankar. I am told that there are several of such trade routes all around Maharastra that pass through the beautiful Sayadris. I was perhaps the first one to register for this trek about two months ago, as soon as my Mumbai tickets were booked. I was asked about my trekking experience as this one requires great stamina. We were to walk for around 65-70 kms in two days.

I flew to Mumbai on the 11th and took some rest at my sister's house that day. Caught up on some sleep and at around 1AM my brother in law and I drove to Lonavala railway station. The meeting time was 2:30 AM at the railway station. The traffic on the Puna-Mumbai expressway was heavy and caused some delay but we reached well within time.

At the railways station, I met my 20 other trek companions. Most of them were regular trekkers with this group called Trekmates and hence knew one another. However, there were a couple of them who were new.

At around 3:00 AM, after a short introduction, we set off on our walk. By 5:00 AM we had to reach a village. I fail to remember its name. I think it was called Valwand Village. So the first stretch of walk was completely in the dark so, I took time to know some of my companions. Tushar from Pune, an entrepreneur; Shailesh from Mangalore but brought up in Mumbai, a math teacher; Binoy and Advaith, fresh engineers; Ganesh, Engineer again from Pune but works in Mumbai. There were four girls in the group. Except for the one who gave up in the first stretch, the other three were super fit and in many ways better trekkers than some of the men.

At the first village, we rested for about an hour at a temple premises. An old lady got us some much needed tea. However, the tea was made on a open stove that gave a strong flavour of smoke to it. But, at such a time, even that tasted like heaven.

By now, the night had given way to dawn which had begun uncovering some delightful views to the eye. 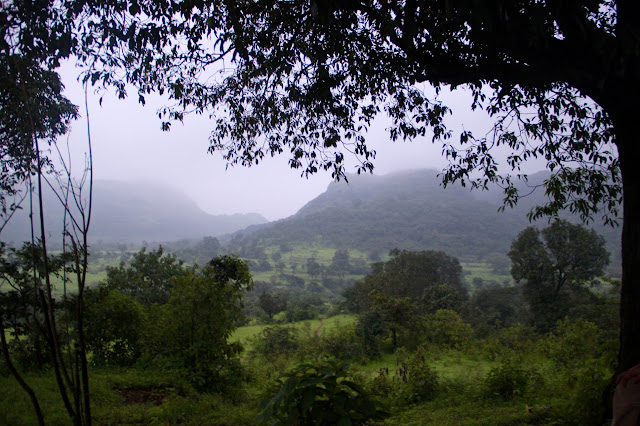 After having tea, we continued our walk. The trek pattern was almost similar through out. Ascend a hill, reach the plateau, cross it and then descend only to board another. It was fun to cross some water falls. The huge plateaus where filled with beautiful flowers like Balsam and this special purple flower called Karvi that blooms once in 8 years. We were only lucky to be on that 8th year and see it blossom in full fledge. 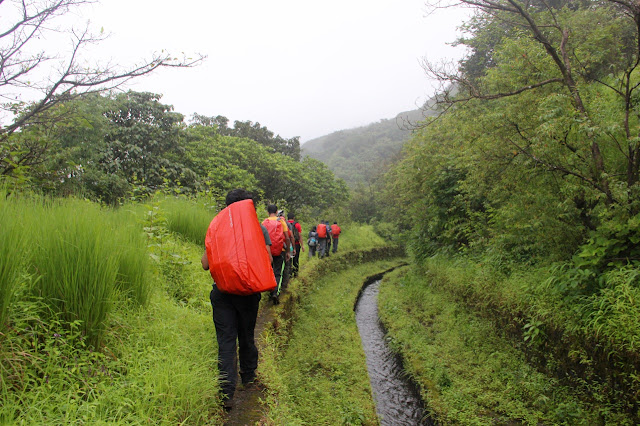 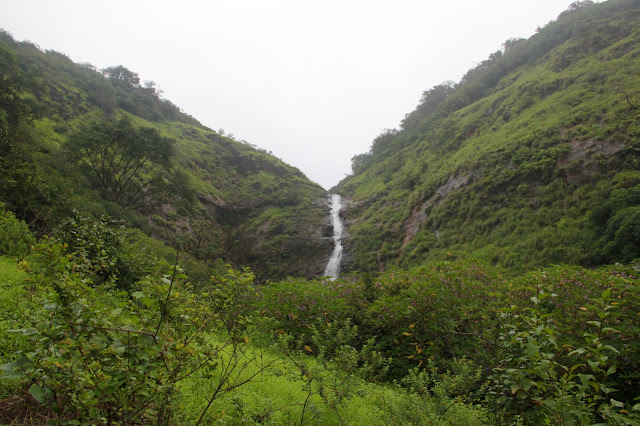 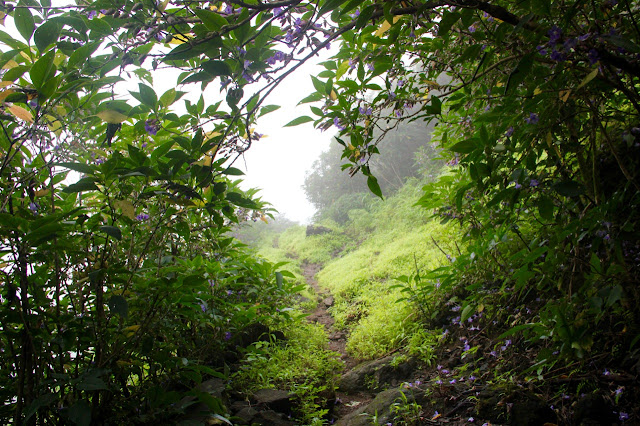 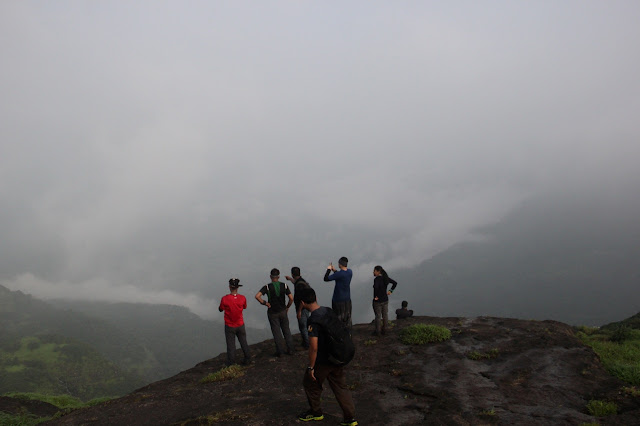 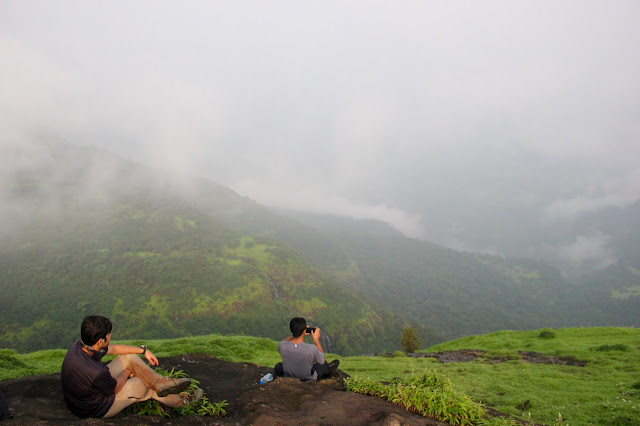 Binoy was referring to the flower (karvi) when they just emerge out of the buds when he mentioned - « Kitne gandhey hein ye pool ». (How dirty are these flowers) That became a joke for us all through the trek. We called it the « Gandhey Phool » (Dirty flower) that blooms once in 8 years. He would always use the word Gandhey with a strong stress on « an » for everything. « Gandhey phool », « Gandha trek » «  Gandha panni ». 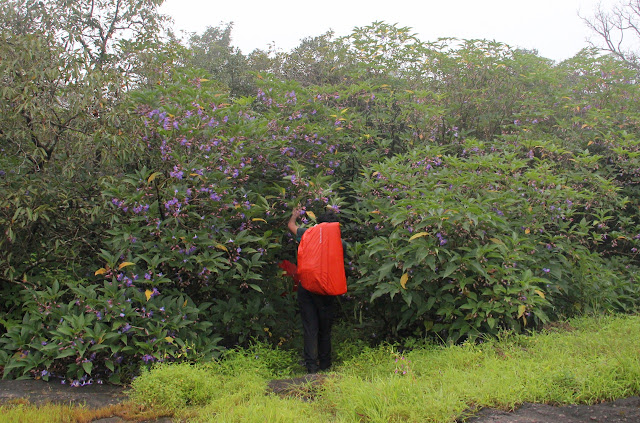 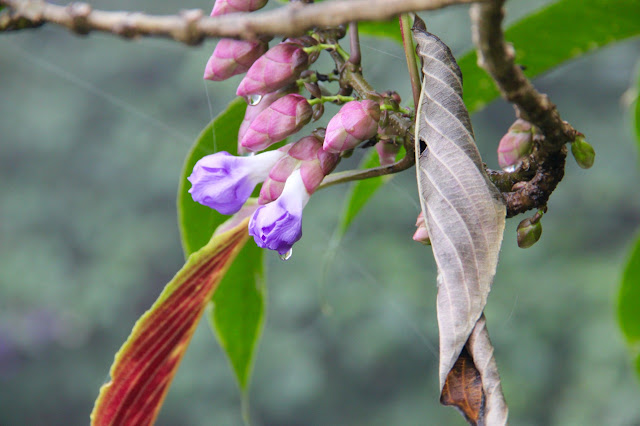 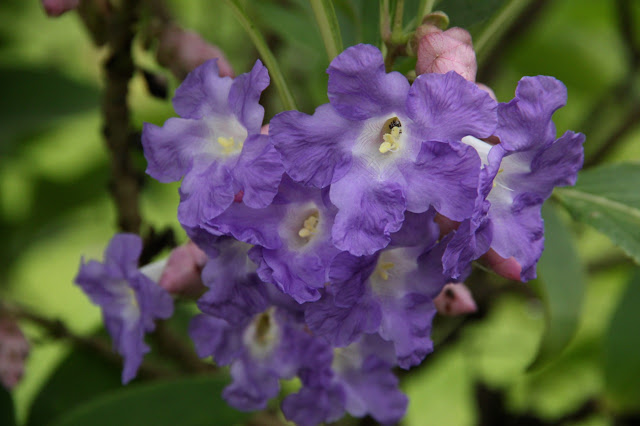 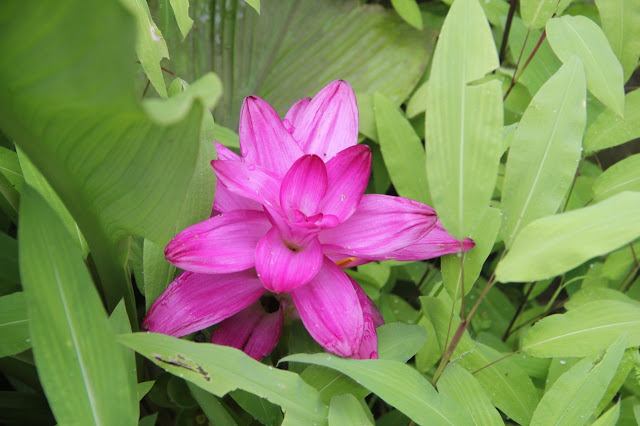 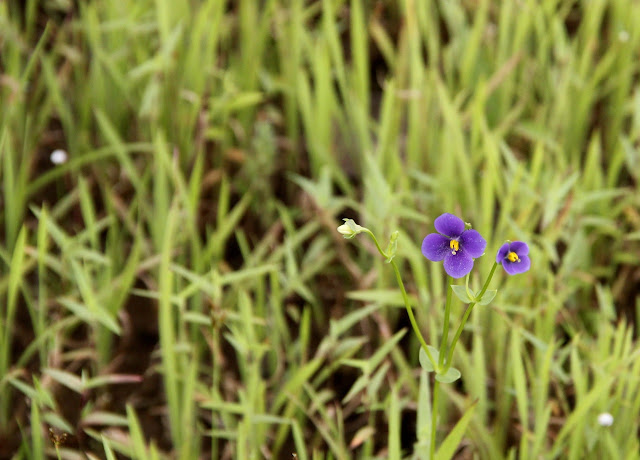 We reached Kusur plateau and at one end of it is a tower of some kind. Below which is a house where stays a villager. He and his family welcomed us with some water and gave us some shelter to have our lunch. We ate our packed lunch, filled some water and then began the descent to Kusur village. Here we had to walk about 10 kms on tar road which would not be exciting so the trek lead had arranged for a tempo to transport us to next spot - Talape Village. Apparently, there was a delay of about an hour and a half for the tempo to arrive. So we rested by a small house. Requested the lady to prepare some lemon tea for us that tasted brilliant. 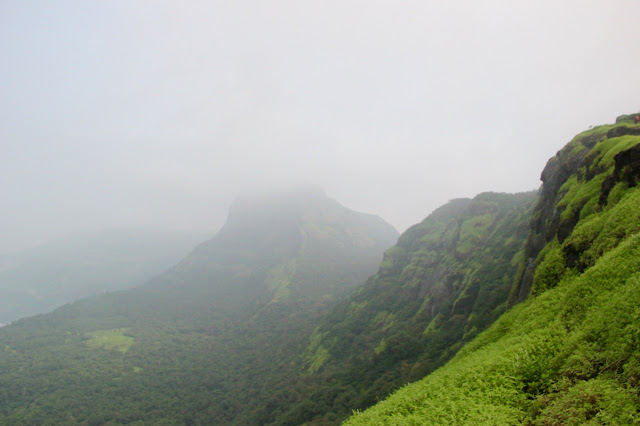 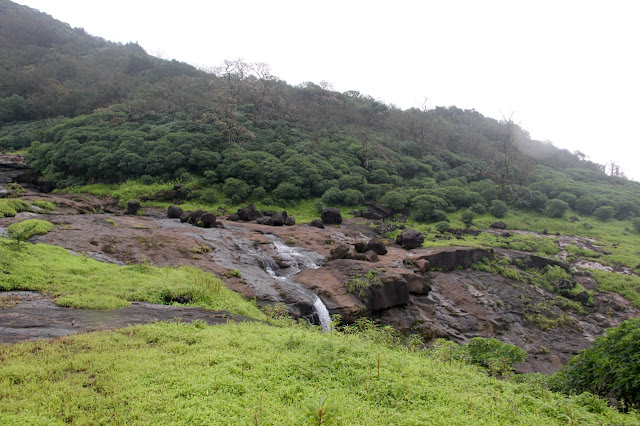 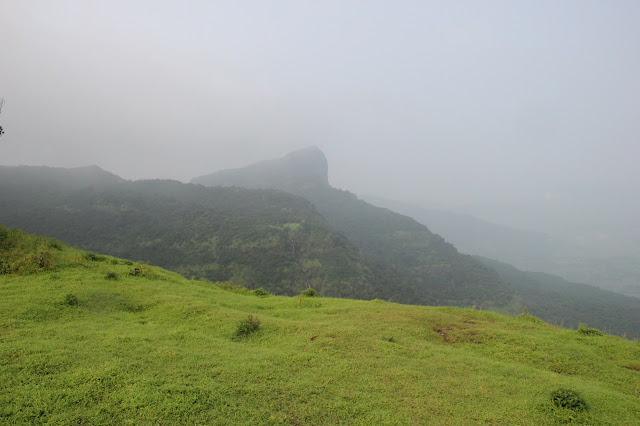 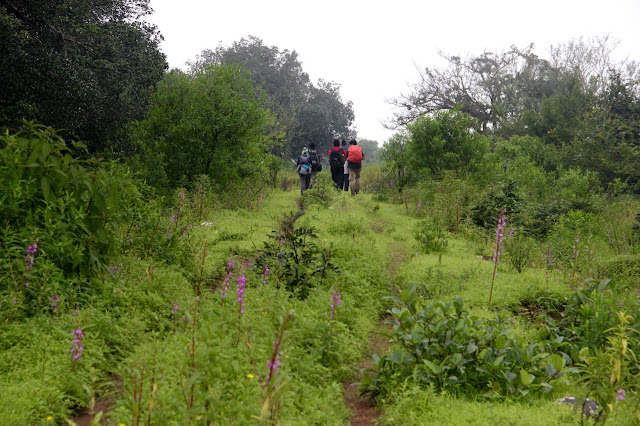 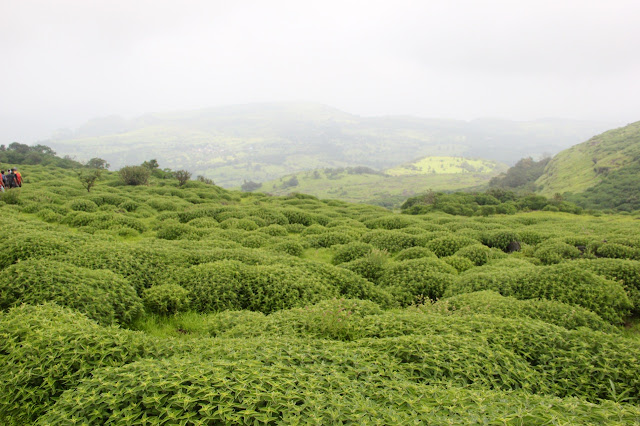 As we began our next climb the cloudy skies began to pour. Thanks to my poncho, I saved myself and my bag from getting drenched. We walked for several kilometres to reach a village called Padaryachi Wadi. This is a small village comprising of not more than 10-15 houses. We were allowed to sleep in their community hall. We freshend up at the nearby stream and then had dinner at a villager's house. Chapati, sabji, rice and daal was more than what was expected at that time. Soon after dinner, we crashed. Our tired legs needed some rest. 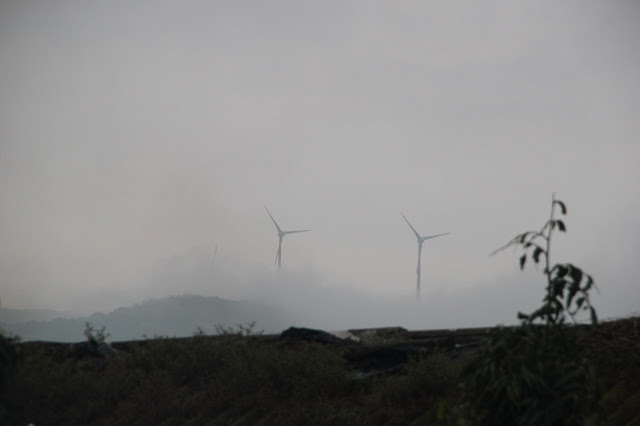 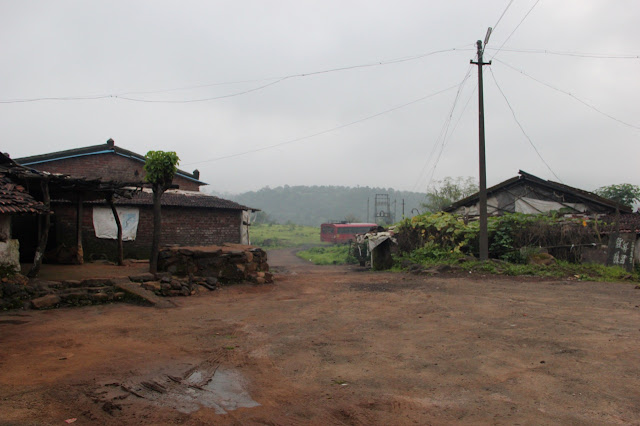 Next morning, we got up, freshened up , had brekfast at the villager’s house and then left at around 7AM. More accents, more plateaus and more descents. The scene did not change much so more or less they all looked the same unlike in the western ghats of Karnataka. Of course the mountains of Karnataka are at much higher altitude than these so you get to see varying vegetation all through your trek.

After about four hours of walk, we reached Bhimashankar at around 1:00PM only to find a terrible influx of devotees. The peaceful walk had ended in a rather chaotic place; with people screaming, pushing one another to get in the queue and fighting over priority. 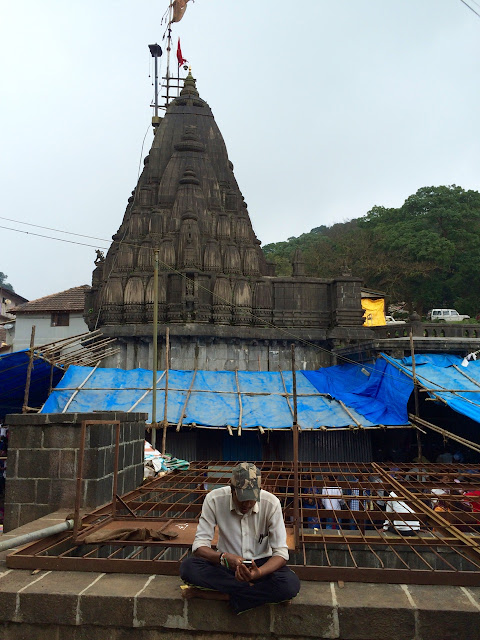 None of that mattered to us; the one’s who had cleared this endurance test. We had some food at a local restaurant. Tushar and I bid farewell to others who wanted to continue the trek until Karjat (A 4 hour long descend via Sheedi Ghat). I thought that, I would not enjoy this walk if it had similar views so, decided to take  a bus back to Mumbai from Bhimashankar. That, I think was the best decision. The trek was very good but there seemed always a hurry amongst the team to reach a destination. We had to reach a place by lunch time, or reach a place by dark which made the trek a little like a timetable.

I accompanied Tushar till Manchar on his Pune-Bhimashankar bus. From here, I had to take a bus to Alephata. Here, I boarded a bus to Kalyan. From Kalyan, I took another one to Panvel. It was fun. I realised how much I like being on the road- observing people, specially villagers and knowing their culture. I had a calm mind while returning as there was no hurry to reach anywhere in a designated time. It was one amazing trek for it tested my stamina. Let me not lie, my foot ached, I did crib about the long walks but in the end it all constituted in building the « never give-up » attitude in me. That is what treks of this kind do to you, it makes you stronger, both, physically and mentally.