Yakshagana has influenced me greatly during my childhood. My cousins and I have spent entire night watching different stories from Indian mythology enacted in this folk art form. While the story and the performance enthralled us, I was particularly interested in the costume. How each character had their own identity and how the costume helped define that. So to paint a Yakshagana character was always in my mind.

I started looking at different pictures to choose a character from Indian mythology and Hanuman was the most appealing with a green face, golden crown decorated with pearl. So picking the subject was not difficult at all.

On the first day, I was surprised how quickly I completed the face. 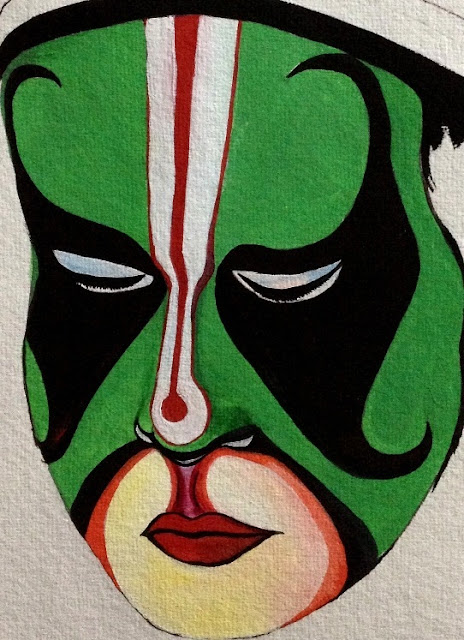 But then a second day that attempted the crown failed miserably. I simply did not want to continue. My Guru always told me that no matter what I paint, I must always add something creative and unique from my end. And with this painting, I had no other choice than making Hanuman of a yakshagana look like how he does. Cornering myself to a dead end, the painting stood still for almost 3 months with nowhere to go.

My first thought was to add a story. Include Sita in Ashoka Vatika in one side and Rama on the other side. But space was a constraint. So with no motivation to proceed, the painting waited there on my easel for the moment to arrive.

And the moment arrived with my friends, Aditya and Parag. At my place, when we were discussing the painting, Parag mistook the yellow patch made for crown to be feathers. While recollecting a joke, he made a very funny comment. After they left, as I watched the painting, Parag's subtle humour hit me and I decided to replace the crown with  feathers.

Not only because it was different from the costume, but for the fact that it would better define the character. Feathers made him appear more part of the forest; made him look more vibrant and lively and allowed me to present him more as a human than an ape. 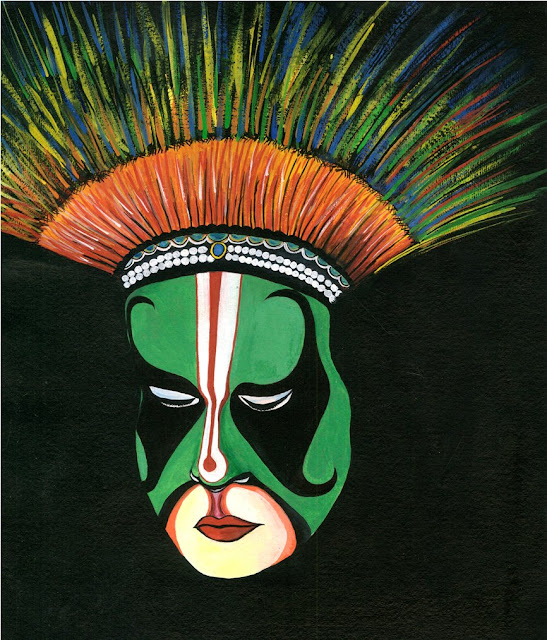 And the expression conveys his most distinctive characteristic - Bakthi, meaning devotion; Devotion towards Lord Rama.
on May 22, 2013

Email ThisBlogThis!Share to TwitterShare to FacebookShare to Pinterest
Labels: Art