The Way Home - A Synopsis

on October 10, 2010
The way home (Jibeuro) is a 2002 Korean film about a small boy being left alone in a village for few days with his old grandmother who cannot speak. The story follows few days of the boy’s life, until his mother finds a job in town during which they (grandmother & he) break the barriers between them such as urban-rural culture, generation gaps, communication and most importantly the attitude towards life. 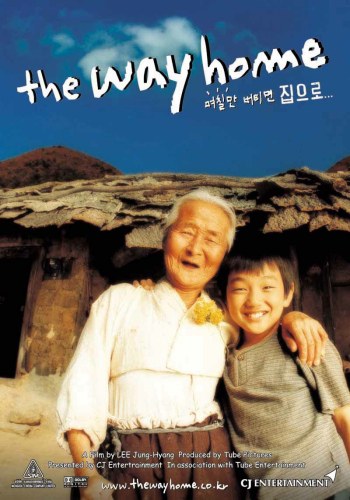 The way home is a very interesting movie to watch with direction as though everything is happening right in front of you. Scenes where the grandmother gives him a haircut and where she provides him boiled chicken when asked for fried chicken is simply fantastic.

The 78-year-old villager and non-actress 'Eul-boon Kim' had not only never performed in a movie before 'Jibeuro', but she had never before *seen* a film. She was found during an extensive talent search among real rural village people by director Lee Jeong-hyang to play the lead role of the stoic, heroic mute grandmother.


The fun of watching foreign language film for me is to be able to virtually take a tour to their beautiful country and get to know their culture. Some beautiful rural glimpses from south makes up the background for this story.

Both the grandmother and the boy are simply outstanding in their performance.